Siparuna guianensis Aublet is a predominant species in the Brazilian Cerrado. Some studies found that its essential oil has properties that could be useful for manufacturing new products. Its quality depends on physicochemical properties, since its degradation, as well as water content and other volatile materials may cause several changes in its features. The differential scanning calorimetry (DSC) was used to determine the water content in the S. guianensis essential oil in order to evaluate its thermal parameters. The method is based on the hypothesis that the desolvation enthalpy (∆Hdesol) needed for removing n water moles from the essential oil is approximately the enthalpy needed for melting the same n water moles (n∆Hf). Thus, the current study considers the dissociation enthalpy (∆Hdiss) to be negligible. The total number of moles was calculated from the molecular mass value of the main essential oil components mentioned in the literature. The DSC curve in nitrogen atmosphere indicated the melting temperature of 1.6°C (ΔH=18.95 Jg-1). Based on the dehydration enthalpies demonstrated in the DSC curve, it was possible to infer that the calculations on the number of water moles and other constant volatile materials found in the S. guianensis essential oil were compatible with Karl Fischer Titration (KFT) method. This method is commonly used to determine the water content in substances.

The physicochemical properties of the essential oils are crucial in the development of new products. Featuring the active ingredient may optimize quality parameters, ensure effectiveness and decrease the presence of water, impurities and/or degradation compounds. They may lead to undesired effects on the oil’s composition. Water is a polar molecule and it may strongly interact with ions or polar molecules of ion-dipole or dipole-dipole interactions, respectively. Since the hydrogen bonding energy between water molecules in solid state does not significantly differ from the bonding energy of hydrogen molecules of water in liquid state water molecules grouping may occur on the ice surface even before a complete monolayer  is  formed  (Brown, 2005).  Thermalanalysis refers to a group of techniques in which a property of the sample is measured against time or temperature, whereas the temperature of the sample, in a specified atmosphere, is heated or cooled at fixed rate of temperature change or hold at constant temperature (Giron, 2002). The differential scanning calorimetry (DSC) and the thermogravimetric analysis (TG) are the most used analytical techniques in the development of different studies on a wide variety of pharmaceutical materials (Souza et al., 2012). Thermal analysis methods, especially DSC and TG, have been used to feature the study, development and quality control of medications in general (Shamsipur, 2013).

This work applied these techniques to feature moisture contents in the study on the essential oil from Siparuna guianensis. It is a plant widely used in the Northern and Northeastern Brazilian regions due to its ethnobotanical properties such as antipyretic and decongestant and to its importance to healthcare. DSC and TG techniques are mainly applied to feature the molecules used in the development of bioproducts (Shen et al., 2010). Therefore, determining moisture content and testing the stability and decomposition kinetics of some valuable parameters regarding the thermal behavior of drugs and medication compounds, such as decomposition rates, possible mechanisms, and values of some thermokinetic and thermodynamic parameters, became necessary (Santos, 2004; Dantas, 2006).

Using DSC to determine essential oil moisture has some advantages in comparison to other methods, such as the relatively short analysis time and the use of small amounts of sample (Sandor, 2005). Thus, the DSC technique allows detecting a fraction in the total amount of a given substance, such as water molecules. It also allows quantifying the components from other volatile materials according to the dehydration and vaporization enthalpies (Khankari et al., 1992). Therefore, the current study aimed to determine the thermal featuring parameters and the number of water moles per mole in the S. guianensis essential oil.

The hydrodistillation method used to extract essential oil is able to modify the water content in the samples. Terpenic and sesquiterpenic compounds easily oxidize under the influence of air, light and humidity due to their unsaturated character (Ganlim et al., 2002). Thus, it is necessary to accurately measure the water content in the tested samples before analyzing the  pure  essential  oils.

It is done in order to obtain conclusive results. The current study suggests using an oil dehydration process similar to the hydrate desolvation performed by Khankari et al. (1992). In that case, the endothermic desolvation included steps that begin with the breaking up of solvate bonds up to solvent vaporization. The crystal structure reorganizes itself by breaking up and forming intermolecular forces after the desolvation. The structural rearrangement is part of the process (Chadha et al., 2012). According to the current study, the dehydration process is given by: 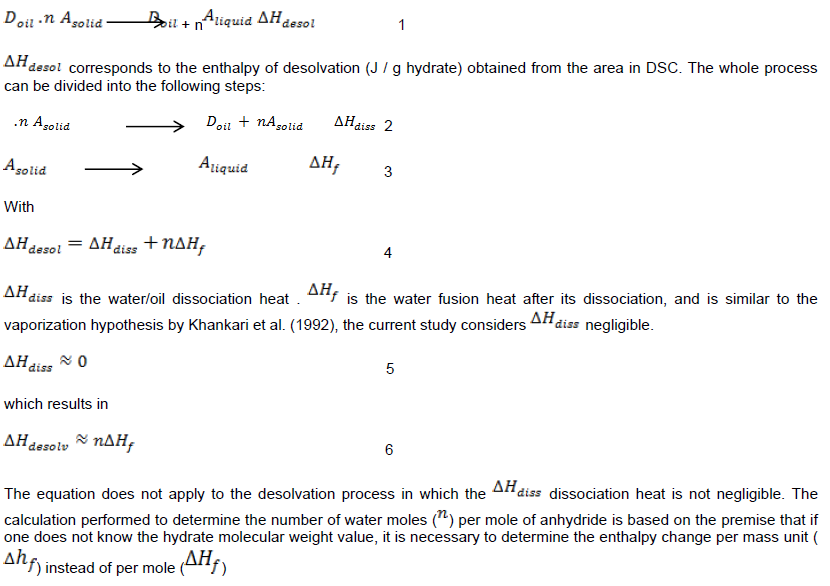 The stoichiometric number, n, represents the number of water moles per oil mole.

The harvesting of S. guianensis Aublet leaves was performed in a Cerrado fragment in Formoso do Araguaia, in Northern Brazil, Latitude: 11° 47' 48" S Longitude: 49° 31' 44" W. The botanical material exsiccates were deposited at Universidade Federal do Tocantins - Campus Porto Nacional (register 10.298). The samples were ground, and their mass was analyzed (25 ± 5 g) and stored at 4°C for later use. Subsequently, they were placed in a volumetric flask containing 500 ml distilled water in each extraction. The adjusted methodology defined the ideal time to extract the essential oil in 80 min distillation (after the first sign of boiling). The essential oil was extracted according to the steam distillation method - using Clevenger type apparatus - and it was expressed based on its fresh mass (Sandor, 2005). All experiments were performed in triplicate and standard deviations were calculated.

A 25.78 mg essential oil sample extracted from S. guianensis leaves was subjected to DSC analysis using Netzsch apparatus, model STA 449 F3 Jupiter, in N2 atmosphere at the flow of 50 ml / min under temperature ranging from -30 to 40°C, with heating rate

Essential oil samples of approximately 32.3 mg extracted from S. guianensis leaves were subjected to thermal analysis and the thermogravimetric curves (TG) were obtained using Netzsch apparatus, model STA 449 F3 Jupiter, in N2 atmosphere, at the flow of 50 ml / min under temperature ranging from 39.15 to 400°C, with heating rate b = 2, 3 and 5°C/min. The sample mass (%) and temperature (°C) were measured at 1.2 s intervals for 36 min.

The water content of the essential oil was determined according to Karl Fischer method in order to compare the results; Equation (10):

The measurements were performed in a Mettler Toledo Karl Fischer titrator, DL31 model. The principle of this method is the titration of a conventional Karl Fischer reagent in an anhydrous methanol solvent in the presence of S. guianensis essential oil. The same procedure was carried out in triplicate. Regarding this titration test, the oil samples were measured on an analytical scale, using specific glazing. The values ​​were expressed as % of humidity and converted into moles.

Figure 1 shows the DSC curve. As it can be seen, the mass loss, due to water sublimation in S. guianensis essential oil, happened at the temperature interval from -3.1 to 5.9°C, with maximum peak at 1.9°C, thus totaling the area of 18.95 jg-1. Many studies use these methodologies as alternatives in the quality control of pharmaceutical materials (Atkins, 2002; ASTM, 2003; Sandor, 2005). 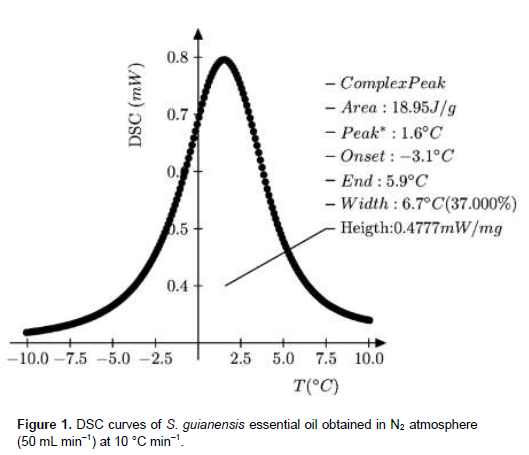 Using DSC to determine the water content and other impurities in the S. guianensis essential oil

The non-linearity theory explains the determination of water content and other impurities by means of DSC. In other words, the area where the event normally starts is derived from processes such as the vaporization, oxidation or the decomposition of the oil itself as well as the impurities themselves. The endothermic transition of approximately 1.6°C may be evidence that the S. guianensis essential oil presents water of hydration in its composition. The stoichiometry of water molecules may be calculated at each stage by using the vaporization hypothesis. The results are listed in Table 1. As for the analysis in the Karl Fischer titrator, the essential oil was titrated in triplicate and presented mean moisture of 0.352 ± 0.005 water moles per anhydrous mole. The presence of moisture in oils may negatively influence the transesterification process (for the production of bioproducts) by disabling the basic catalysts and releasing water molecules, thus reducing yield (Simões et al., 2004). Table 2 shows the values obtained during the analyses of samples with mass almost identical to that of the S. guianensis essential oil, at three different heating rates (β): 2, 3 and 5°C min-1 (Figure 2). The values mentioned in the TM column are, in this case, those read in the respective maximum peaks of DTA curves, as they were determined by the method developed by Kissinger (Kissinger, 1957). Figure 3 shows the values presented in graphic form, with the linear regression, the straight-line equation and the correlation coefficient R2. The straight-line equation (Equation 11) is

, may be calculated using parameters such as angular coefficient of 4885.5 and gas constant of 8.314 Kj mol–1,

calculated for the S. guianensis essential oil was 40.61 kJ mol–1. From the linear coefficient (Equations 13-16):

Therefore, based on the data analysis by DTG, it is possible to highlight that the Arrhenius Equation (Equation 17) for the overall conversion of the S. guianensis essential oil can be described by:

Equation 17   adjusts  itself  to  the  experimental  data  at temperature ranging from 35 to 400°C. It highlights the hypothesis that melting is the prevalent phenomenon, although there are parallel ones, since the activation energy was relatively low (Martins, 2008). 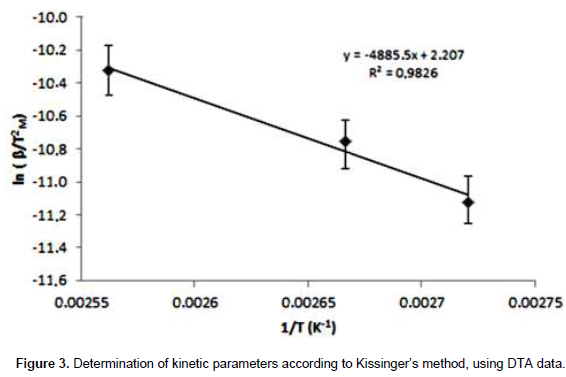 The stability (in days) of the S. guianensis essential oil was calculated based on Equation (18), using 35°C, (lower limit of the analyzed range). The estimated thermal stability time of approximately 33 days or 1 month was obtained starting from the analysis date. Guimaraes et al. (2008) used other analysis techniques and found 50% myrcene concentration loss in 120 days. Myrcene is the major component found in S. guianensis essential oil.

The thermoanalytical techniques used in the current study provided the parameters of the S. guianensis essential oil. They are important to determine water content and other impurities during the quality control of this oil. The DSC found water content similar to that found by Karl Fischer technique. DSC was considered to be a faster and more reliable technique because the oil melting is not followed by material decomposition.