This study investigated the influence of ownership structure on financial performance of privatized companies in Kenya for the period of 2007 to 2013. The study was informed by the property rights, the agency and the resource based theories. Data was extracted from prospectuses and financial reports of privatized companies, obtained from the Capital Markets Authority (CMA) and the Nairobi Stock Exchange (NSE). A unit root test was used to examine stationarity of data while a Hausman test determined the appropriate regression model. This study used a Fixed Effects (FE) regression model with a robust standard error option to control for heteroskedasticity and contemporaneous correlation which may lead to spurious results. The study found that ownership structure has a significant relationship with financial performance. Among individual variables, government ownership has a positive influence on Return on Assets (ROA) and the Tobin’s Q; but a negative effect on cost efficiency. Institutional shareholders have a positive influence on ROA and technical efficiency. Large individual investors have a positive influence on cost efficiency. Dispersed shareholders have a positive influence on ROA but a negative effect on cost efficiency. This study recommends that the Privatization Commission of Kenya should restructure ownership of privatized companies to reduce government and dispersed ownership further to pass more control and decision making to private investors. However, the government should retain some ownership in privatized firms to enhance shareholders confidence, protection of investments and managerial monitoring. A strategic institutional investor in each company should be identified and be allocated adequate ownership to enable privatized companies attract managerial and technical expertise crucial to improve governance and financial performance.

This section present the methodology used to examine the influence of ownership structure on performance of privatized companies in Kenya for the period 2007 to 2013. Purposive sampling was used to select the privatized firms from a population of all the listed companies in Kenya. This method allows the researcher to pick the sample according to the nature of the research problem and the phenomenon under study (Saunders et al., 2009). Firms selected were those privatized by sale of shares, listed at the NSE and the in which the GoK has retained some ownership. The study was also confined to firms where majority of the shares were owned by the state before privatization. This means one in which not less than 50% shares were held by the GoK and hence, fit the definition of the SOEs as provided in the State Corporations Act (CAP 446). The firms had published their annual reports and by using the criteria, eight firms were selected and are spread in economic sectors such as: communication; manufacturing; financial; commercial; insurance and energy.

The data was extracted from annual reports of privatized companies for the period 2007 to 2013. The audited annual reports were obtained from CMA and ownership variables extracted from the reports were the percentage of shares owned by state, local institutions foreign institutions, large individuals and dispersed shareholders. This was possible as the public offers, listing and disclosures regulations require listed companies to disclose the identity of major shareholders (CMA, 2002b). Financial performance variables used are ROA, Tobin’s Q, cost efficiency and technical efficiency.

The values of ROA were computed by dividing profit after tax by total assets for each company for each year during the period 2007 to 2013.

The values of profit after tax and total assets were extracted from the NSE handbooks for 2008; 2012 to 2013 and 2013 to 2014. The variables were compared to those in the annual reports of privatized.

Tobin’s Q ratio was computed by dividing market capitalization (total shares of a company at end of financial year multiplied by the share price) by the total assets. The values of the total shares and the share prices of the company at the end of the financial year were extracted from NSE handbooks for 2008; 2012 to 2013 and 2013 to 2014. The cost efficiency and technical efficiency values were computed using the SFA version 4.1c. The input values used were; cost of sales/ materials, total expenses (financial and operating) and total assets while output was measured by total sales.

The data analysis techniques applied in theses study include a combination of summary statistics, correlation, regression diagnostic tests and regression analysis. As panel data is used in this study, a major concern is non- stationary of data series which may lead to spurious relationships.

This study used the Levin, Lin, Chu (LLC) test whose null hypothesis is that a variable is non-stationary implying that it has a unit root. As the study uses panel data, firms used in the sample may have individual characteristics which may impact on financial performance. A Hausman test was used to determine whether to use the Fixed Effects (FE) or Random Effects (RE) regression model to control for firm individual characteristics.

The influence of ownership structure on performances was examined through the following four regression models:

The variables and coefficients used in the regression models are measured as follows:

α 1 = Coefficients for each of the independent variables to be estimated: i = 1-8

INST = Percentage shares owned by local institutions in firm i, in period t.

FORI = Percentage shares owned by foreign companies in firm i, in period t.

LISH = Percentage of shares held by large individual shareholders in firm i in period t.

DISP = Percentage of shares held by dispersed shareholders in firm i, in period t.

FSIZE = Total assets of a company (the log of total assets)

The results for ROA, Tobin’s Q, technical efficiency, institutional, foreign, dispersed, leverage and investment shows that the p-values calculated are less than the critical value of 0.05 which means that the variables are stationary in their original form. The p-values for cost efficiency, government, firm size, and large individual were more than the critical value of 0.05 implying that the variables had unit roots. The variables were subjected to a first level difference which involved creating a variable that reflects the difference in scores for one time period. Following this procedure, firm size, and large individual achieved stationarity and hence the differenced values were used in the regression models.
The cost efficiency and government remained non stationary and could not be differenced further as the unit root test requires a minimum of six (6) panels. Their p-values also remain constant which means the series is not mean-reverting.
The cost efficiency and technical efficiency were therefore used in the regression models in their original form. Table 3 presents the Hausman test for the regression models examining the relationship between the ownership and financial performance of privatized firms.

The results indicate that FE regression model was the best suitable model for ROA, cost efficiency and technical efficiency since the p-values were significant. The results for the Tobin’s Q yielded no results and this study opted to apply FE in this model to be consistent to results of other tests.
The influence of ownership structure on performance of privatized companies
Table 4 presents the results of regression models used to examines the relationship between ownership structure and financial performance. The table has four panels as four regression tests were done using ROA, the Tobin’s Q, cost efficiency and technical efficiency. Panel A presents the regression results of the influence of ownership structure on the ROA, Panel B on the Tobin’s Q, Panel C on the cost efficiency and Panel D on technical efficiency. The results include the coefficients of individual variables, robust standard error estimates; the coefficient of determination, R2; F-statistics and the t-statistic. 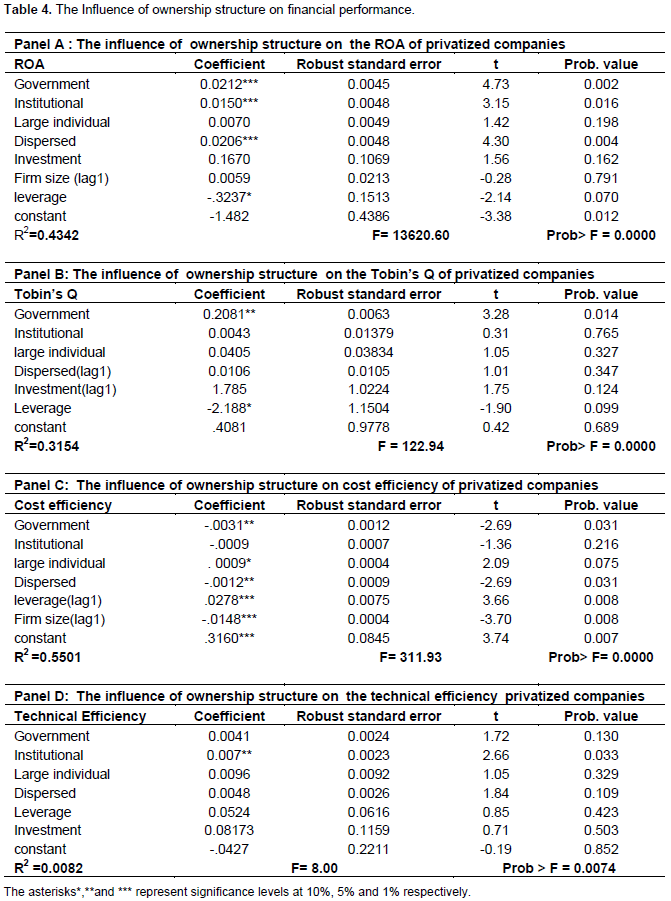 The authors declare no conflicts of interest from organizations or any other individual.