The role of logos in brand personality of organizations

The purpose of the study was to examine the role of logos in brand image of banking institutions, and to examine whether consumers are influenced in anyway by the logos that banks use as part of their corporate branding. A stratified sampling was used to select 50 respondents. Questionnaires were administered to customers from Ghana Commercial Bank, Merchant Bank Ghana Limited, Standard Chartered Bank (Ghana) Limited and Barclays Bank Ghana Limited to solicit data. The major findings from the study revealed that logos play a very important role in brand image of a bank and helps communicate and share their frame of thought. The brand influenced customers' choice, feeling and behaviour because the brand met their preferences. Logos or brands in today's banking industry to some extent necessitate customers' patronage of a particular bank. Thus, companies benefits from a competitive advantage by properly branding and registering their brand which gives customers a feeling of quality and safety as far as the brand is concerned. Symbols or Logos and brands influence customer feelings, behaviors and choices. Recommendations made include: management of banks should allocate more funds to its branding activities. Corporate Affairs Managers of banks need to organized monthly or quarterly mystery shopping to seek customer feedback on the brand image of their banks.

Brands are about consumers, their perceptions and their preferences which usually vary from time to time. It is equally important to note that what appeals to one person may not appeal to the other. Numerous studies have been done on Brand Image, with some focusing brands within symbolic categories, for example; stereo, sneakers, camera, fragrance, beer, wine, cellular phone, and car (Batra et al., 1993).
Some authors argue that brand image should not have any effect among products and brands that are bought and used primarily to solve problems (Aaker 1997). According to Aaker (1997), the brand image approach can enable researchers to understand the symbolic use of brands at the same level as multi-attribute models. However, most banking institutions are still placing emphasis on financial performance rather than brand success indicators (De Chernatony, 2010). Based on these conceptual arguments raised by the authors, the researcher undertakes to uncover the role of logos in brand image of banking institutions in Ghana.
This study seeks to explore the purpose, nature, and power of logos and its effects on consumer choices and general organsational revenue. The problem statement therefore is as follows:
(1) Why are brands important and why consumers would buy a branded product or service and not others?
(2) Do they buy or patronize because of the logo or is it the logo, brand name and the quality?
Purpose of the study
The study has a general objective of establishing the role of logos/symbols in brand personality of organizations. Specifically, the study has the following objectives:
(1) To establish the factors that influences the choice of Logo/symbols in banking institutions
(2) To find out how logo communicates the corporate  identity of the organization to clients
(3) To determine the influences of brand image of an organization
(4) To ascertain the extent to which logo(s) of a bank affects the patronage of its products and services.
Research questions
Based on the reasoning aforementioned, this study seeks is to gain a better understanding into how customer patronage of good or services are influenced by the logos of companies. Three research questions have been outlined; answering these questions will give us an understanding necessary to help accomplish the stated objectives.
(1) What factors influences the choice of Logo/symbols in a banking institution?
(2) To what extent do logos communicate the corporate identity of the organization to clients?
(3) Do clients care about the brand image of a banking institution?
(4) To ascertain the extent to which logo(s) of a banks influence the patronage of its products and services?

Research design
Research design can be thought of as the structure of the research. In the words of Kapferer (2008), a research design provides the glue that holds the research work together. Kapferer (2008) further indicates that a design is used to structure the research, to show how all of the major parts of the entire research work together to try to address the central research questions. This research explores attitudes, behavior and experiences through such methods as interviews or focus groups. In quantitative research, statistics are generated through large scale survey, using methods such as questionnaires and structured interviews. For the purpose of the study, both qualitative and quantitative research approach was used, thus it is a mixed method.
Population, sample and sampling procedure
The population of the study therefore, comprise of all the twenty-seven (27) universal banks in Ghana. Out of the population chosen for the study, random samplings of fifty (50) customers of the selected banks were used for the study. Basically, there are two main types of sampling methods, which are probability sampling and non-probability sampling. For the purpose of the study non- probability sampling was used. Purposive sampling was used to sample the clients needed. For the purpose of obtaining data from the clients of the selected banks, convenience sampling was adopted. This was also used for other customers who were readily available to respond to the questionnaires administered.
Instrument
Questionnaires were used to collect data for the study. Fifty (50) questionnaires were distributed in all. It gave the researcher the opportunity to probe further into what influence the choice of logo in an organization. Close and open ended questions were used. With the close ended questions, the  study  gave  out  a  set  of  possible answers to questions from which the respondents had to select. The open ended questions gave the respondents the opportunity to give answers on their own opinion(s).
Data collection procedure
Data collection approach used in this study was a survey approach. This approach calls for interrogational method that is used for questionnaire. For maximum efficiency and effectiveness of the research, the instrument was administered directly by the researcher. This was done to ensure that detailed discussion and explanation were given to the respondents in question.
Data analysis
Data was analysed quantitatively using descriptive statistics. Charts, Figures, Graphs and Tables were used to represent the data collected for simplicity and clarity. 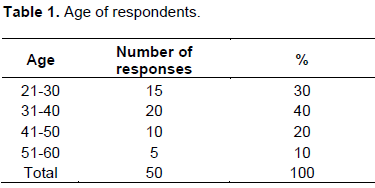 From Table 2, out of the total number of fifty (50) respondents, twenty-two customers, representing forty-four (44%) percent were males and twenty-eight customers which represent fifty-six (56%) percent were females. This means that most of the customer staffs of these Banks according the data gathered was females. That also means there is no gender balance when it comes to banking with these banks.

From the aforementioned statistics (Table 3), it is beyond doubt that respondent who fell in the bachelor category recorded the highest percentage which was forty-four percent (44%) compared to the respondents in the ordinary level which recorded a percentage of eight percent (8%), both professional and masters level recorded twenty-four percent (24%) respectively. 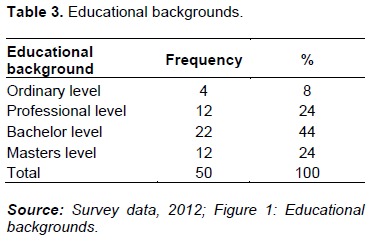 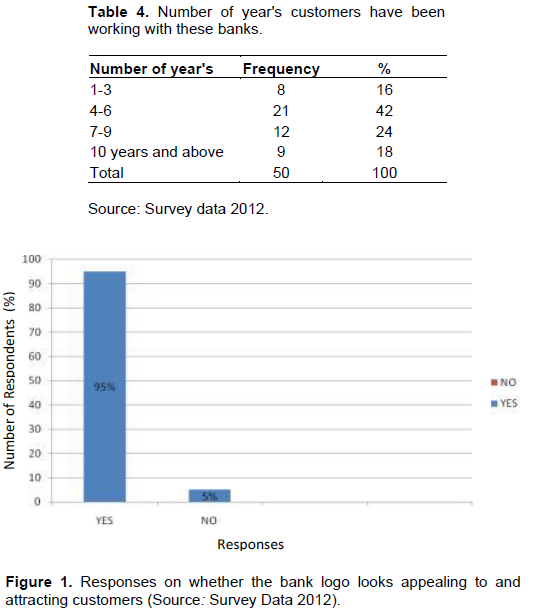 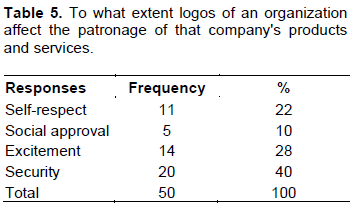 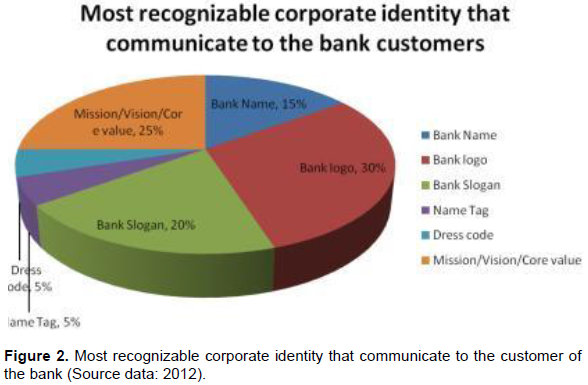 As stated earlier in trying to determine the brand feeling the bank gives to the customer, it came to light that 11 respondents representing 22% said Self-respect, 5 respondents representing 10% said Social approval, 14 respondents representing 28% said Excitement and 20 respondents representing 40% of the overwhelming majority said Security. The result confirms that branding can make consumers believe that a particular product is of high quality, but that perception is subject to confirmation as Chaudhuri (2002) reported in the literature review.
When asked whether brand logo may play as important (or even more important) a role as that of the company name in merger, in terms of assuring consumers that there will be connection with the brands past and respecting the brand heritage, 55% of respondents answered 'Yes' as against 45% of the respondents that answered 'no'. This survey result refutes Schumann (2006), explanation of how companies became not only interested in using brands to attract consumer's attention, but staff members as well.
Again, in soliciting for customers view on whether the bank logo communicates the corporate identity of the organization to the customers 80% of the respondents affirmed YES, and 20% of the respondents affirmed NO. This result validate a study conducted by Balmer and Greyser (2002) looking at the effects of controlled and uncontrolled communication in retail stores vs. banks, find that the service brand name has a significant effect on both customer satisfaction and customer attitude. The brand name is a crucial element of company's identity (Chaudhuri,  2002);   it   plays  an  important  role  for  the awareness toward the brand (Aaker, 1991).
Responses of the respondents on whether the bank logo helps to communicate and share their frame of thought revealed that 50% of the respondents affirmed YES, and 50% of the respondents affirmed NO. This result confirms the connotations made by Chaudhuri (2002) that the reputation of a brand is a better predictor of the effect of brand communication upon equity outcomes than other attitudes toward the brand.
Brand image of organization
Table 6 portrays brand personality of organization with regards to the extent to which the bank customers agree or disagree with the assertions scaled from 1 to 5.

Logos have been identified to have an enormous effect on the overall perception stakeholders will have about the organizations. As a result, firms spend a lot of resources in building good brand image. Nevertheless, it must also be noted that, despite these merits, logos are also limited in the sense that they might take a long time to create the picture or perception organizations intend a well as may end up sending a rather wrong message. Despite the tendency for logos to communicate a wrong message with the influence of culture, it must be noted that logos are very powerful in influencing the perception prospective clients have about firms. As a sequel to the conclusion, the following recommendations are proposed:
(1) Although the research adopted a case study approach, it is recommended that a multiple case study approach should be used in order to obtain more information on the subject matter. Also, future research on the subject matter should look at a survey with a greater sample size so as to obtain views which a more representative of the entire population.
(2) It is also recommended that management of Merchant Bank, Ghana Commercial Bank, Barclays Bank and Standard Chartered Bank should allocate more funds to its branding activities and also consider setting up branding department devoured of the marketing department to look into the case of branding on regular bases.
(3) It is also recommended that more effort should be but in promotional campaigns and distribution networks so as to weaken their life time competitor in the banking industry. Corporate Affairs Managers of the selected banks need to organized monthly or quarterly mystery shopping on customer response to the brand image of their banks.

A major limitation in this study was time constraint which led to the use of four (4) selected banks instead of the twenty-seven (27) banks in Ghana. In future, different methods of research could be used for the study of the same topic or other related aspect of the topic. Specifically, a future study might research into cross-cultural implications of logos/symbols.