Elucidative motives of social and environmental reporting in Ethiopian companies

The prevailing world’s environment and impact of mankind on the ecology of the world at large have led to the increased public concern and scrutiny of operations and performances of companies (Agbiogwu et al., 2016). Businesses have bilateral impact on the environment: in one way it contributes to economic and technological advancement and in the other it causes different social and environmental problems such as pollution, resource depletion, etc. Nowadays, companies are under pressure to become accountable and expected to demonstrate that they are aware and addressing the impact of their operations on the environment and society in general (Ding et al., 2014).
The rapid growth in business activities and increasing concern of societies for their environment has brought the need for companies to disclose their environmental and social activities in annual report (Agbiogwu et al., 2016). Theoretically, firms are expected to deal with environmental reporting in order to be successful and acceptable by different stakeholders around the business. Accounting scholars have used legitimacy theory, stakeholder theory and agency theory to articulate company’s relationship with the environment using social and environmental accounting (Reverte, 2009; Deegan, 2002). The theoretical frameworks were intended to explain the existence of social contract between the company and different stakeholders; and breaching these social contracts will threaten the sustainability of the organization. This posits social and environmental accounting as a key to companies’ competitiveness and survival (Deegan, 2002).
However, currently there is no universally accepted theoretical framework for why companies disclose social and environmental information (Suttipun and Stanton, 2012; Nguyen et al., 2017). Scholars argue that companies reporting on social and environmental information should comply with the existing regulation; nevertheless, there is no stringent regulation compatible with general financial reporting. Moreover, an increasing number of companies are disclosing social responsibility activities with in voluntary framework. Existing empirical studies have evolved the nature of social and environmental reporting (SER) and captured meaningful substances in explaining motivational factors of SER (Reverte, 2009; Gray, 2006; Parker, 2005; Deegan, 2002).
One faction to be noted is that, most of the literatures were concentrated on developed nations where stakeholders and different regulatory bodies can exert high pressure on the organization for its impact on the environment and societies, its standard also originated and implemented. Cumming (2006) also suggested a new research area of social and environmental reporting by which studies should stress on creating broader geographical evidence across nations for the purpose of fully depicting its status and underlying determinants.
In Ethiopia, the reporting system is at its infant stage and undergoing thorough tremendous changes. The financial reporting regulatory body has been focused on implementing International Financial Reporting Standard without considering sustainability reporting. On the other hand, the issues of environmental protection, sustainable development and environmental rights have been explicitly covered by the country’s constitution without handing over the monitoring responsibility to a specific authoritative body. Within these perplex issues containing non-mandatory regulation, the motivational factors for social and environmental reporting in Ethiopian companies should be investigated to influence its degree of improvement. Therefore, this study has identified factors that influenced social and environmental reporting among Ethiopian companies; more importantly, it has provided an insightful explanation for the factors by using different theoretical perspectives.

Study design
This research has adopted explanatory research design with quantitative research approach to identify the causal relationship between environmental reporting and factors that can influence social and environmental reporting of large tax payer companies in Ethiopia. The study has utilized both primary and secondary data. The primary data has been collected through structured questionnaire which included both closed and open-ended questions. The closed ended questions were used to collect categorical data, whereas the open-ended questions have been utilized for enabling the respondents to provide a detail of self-expression that deals with environmental disclosure. On the other hand, audited financial statement of the sampled companies was used as secondary data.
The target populations of this study were large tax payer’s companies in Ethiopia. According to Ethiopian Revenue and Custom Authority (ERCA), there were 1050 large tax payer companies during the study period (2018). Out of the total population, 290 sample size was determined using Yamane (1967) formula. However, as the response rate was 90.3%, only 262 companies were considered as subject for the analysis.
Model specification and variable measurement
In order to investigate factors that affect social and environmental reporting, the study used binary logistic regression model. The binary logistic regression model was selected due to the nature of the dependent variable (categorical variable) with having only two categories (disclosing companies and non-disclosing). To capture the phenomena in a mathematical form:
According to ERCA companies are classified as large taxpayers when they have annual turnover (revenue) more than 37 million Ethiopian birr. 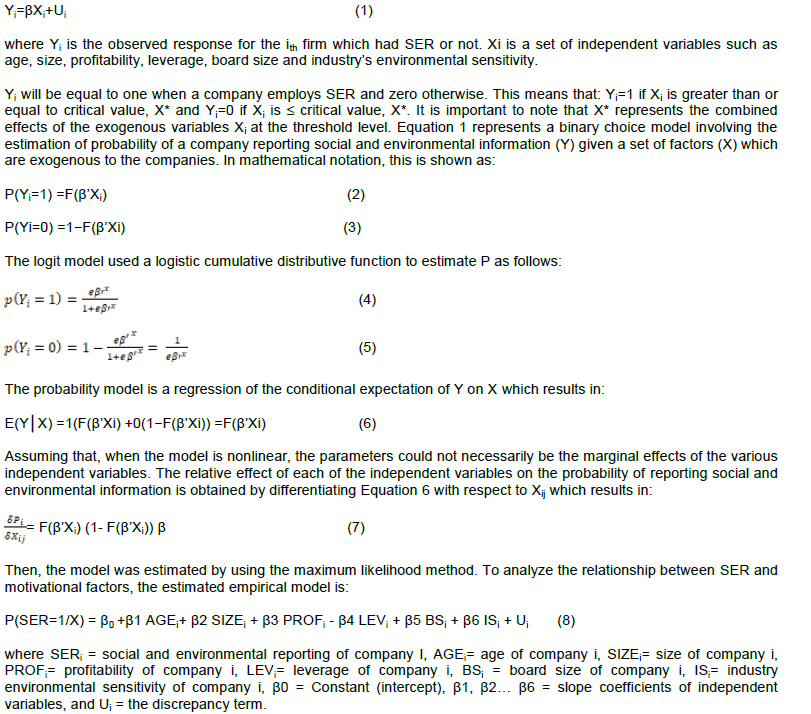 Descriptive statistics
From the sampled companies, 70.99% were reporting their social and environmental practice (Table 1). Moreover, out of the sampled companies, 63.74% were engaged in either in mining or agriculture or manufacturing industry and thus, they were considered as sensitive industry for the environment. The mean value of age, size, leverage, profitability and board size were 20.93, 6.155, 0.597, 0.063 and 6.78, respectively. The minimum and maximum value of age was 6 and 63, respectively. Then, these results had shown a bigger variability among the sampled companies (Table 2).
Correlation analysis among variables
To observe SER association with the motivational factors and ascertain whether the independent variables were not highly correlated with each other, Pearson correlation matrix was employed. As it was illustrated in Table 3, social and environmental reporting had a positive linear relationship with all explanatory variables except leverage, which had a negative relationship. The values of correlation coefficient for independent variables were all below the recommended threshold (0.8) by Gujarati and Porter (2003). Furthermore, the VIF (Table 4) also confirms that there is no evidence of multi-collinearity.
Regression results
The study had employed a logit regression model. Heteroscedasticity problem was expected since the collected data were cross-sectional. To test heteroscedasticity problem, the study used the following hypothesis:
Ho: λ LR=2[Log Lu-LogLr] > critical value at 5 % significance level, Heteroscedasticity
Ha: λ LR=2[Log Lu-LogLr] < critical value at 5 % significance level, no Heteroscedasticity
where log Lu is the value of unrestricted log-likelihood function and Lr is the value of restricted log –likelihood function. λ LR had a distribution with n degrees of freedom where n is the number of independent restrictions. The LR statistics of testing the null hypothesis of homoscedasticity assumption is given by:
LR =2[Log Lu- Log Lr]
where Log Lu is the maximized value of unrestricted log-likelihood function and Log Lr or the maximized value of restricted log-likelihood function estimated only with constant term. In this model, the value of the log-likelihood with only constant term (restricted log-likelihood) was -157.78164 and the maximized log-likelihood value of full model (Unrestricted log like hood) was -20.117624. Therefore, the result of the test for the model is shown as:
LR =2[-20.117624-(-157.78164)] =275.328032
The critical value of Equation 6 is 12.5916 at 5% significance level. Thus, the LR exceeds the critical value, which implies that the model has heteroscedasticity problem. Thus, in order to correct such problem, robust standard errors estimation was employed.
The model was statistically acceptable as 87.25 of the variation explained in the logit model. The Chi-square test showed that the model was significant at 1%, which in turn declared the overall model was a good fit with p-value of 0.0000. The regression result showed age, size, profitability, board size and industry’s sensitivity had a significant positive impact on social and environmental reporting of companies, whereas leverage had a negative effect.
A positive impact of age, size and industry’s sensitivity on Ethiopian companies’ engagement in reporting of their social and environmental information were as expected, which then indicated that when a company gets older or bigger or environmentally sensitive, they were more likely to report their social and environmental practice. Given that these explanatory variables were more related with social visibility; firms wanted to be perceived as a good company for the society and gained a public confidence by disclosing their social and environmental information which in turn maintains their social contract; keeping their dominancy and enabled them to minimize evil eye on the company (Reverte, 2009; Knox et al., 2006; Aerts et al., 2006; Wachira, 2017; Ohidoa et al., 2016; De Burgwal and Vieira, 2014; Naser and Hassan, 2013). According to these results, legitimacy theory was relevant for Ethiopian companies, because they have reported to sustain their legitimacy or to avoid a legitimacy gap between the society and firm’s operation.
The impact of profitability on companies social and environmental reporting was significantly positive, which implied that when Ethiopian companies were more profitable, they would be more ambitious for satisfying the information needed of their stakeholders; especially stakeholders who were in control of the important resources of the firm. This result is in line with stakeholder theory and previous studies (Adda et al., 2016; Pirsch et al., 2007), which confirmed that profitable firms have more economic resource to invest in building their reputability and maintain their position in addition to investing on activities which had direct return like those with a less profitable companies do.
On the other hand, this study revealed that leverage had a negative significant effect on Ethiopian companies’ social and environmental reporting which then implied that unlevered firms reported more environmental-related information than levered firms. This finding also suggested that, when companies in Ethiopia were more levered, their creditors can exert much pressure on them to participate in investment activity which has more direct financial return. Therefore, even if agency theory stated that levered firms have more disclosure than less levered one for minimizing the agency cost, the reporting of levered firms was not inclined to social and environmental information, which was similar to the findings of Wahyuni and Mahmud (2017), Reverte (2009) and Dyduch and Kasodomska (2017).
Finally, board size had a significant positive impact on social and environmental reporting. This result indicated that when board size became larger in Ethiopian companies, they were more likely to have expertise who were capable of observing the bilateral nature of companies’ relationship with its environment from various angle. The result was in line with finding of Siregar and Bachtiar (2010) and Esa and Anum Mohd Ghazali (2012) which reported that, as the number of board member increased, the social and environmental reporting could also have moved in the same direction.

The authors would like to acknowledge Wolkite University for financial and material support for this study.