China, the second-largest economy in the world, has been an eye-catching destination for several foreigners who wish to live and study there. As they are beneficiaries of the Chinese advanced digital payment system, subjective security in using the mobile payment system and the subsequent change in their consumption intention has been a behavioral concern that perplexes scholars. Using SEM, we integrated the technology acceptance model (TAM) with two Subjective security Constructs (perceived confidentiality and perceived trustworthiness) to determine their impact on the system's adoption intention. At the same time, we evaluated the change in consumption intention using one factor (post-adoption consumption intention). A self-administered questionnaire based on prior literature was developed, and a total of samples of 260 foreigners who are extensive users of mobile payment were engaged. The study revealed that once again, TAM's model constructs (perceived usefulness and perceived ease of use) are dominant factors of adoption intention. While one of the subjective security constructs (perceived trustworthiness) was found to be a significant decisive determinant factor, the other one (perceive confidentiality) was found to be a negative but insignificant factor in mobile payment adoption intention among the expatriates. Moreover, this study provides insight into the digital payment system and its impact on influencing consumption intention beyond adoption.

The trajectory economic and technological advancement of China in the last few decades is considered as the result of the successful implementation of reform and open-up policy of the late 1980s (Dong et al., 2017). In line with this economic explosion, the digital payment system of China was always at the center. It has  been attracting many practitioners, researchers, and scholars. Chinese techno experts and their partners work around the clock to improve this technology to make it more convenient, inclusive, and secure. Scholars critically dissected this extraordinary advancement and added to the pool of knowledge. With the ever increase in information symmetry, continuously plunged fixed costs, and availability of various financial products and services, the digital finance system becomes an inseparable part of Chines’ financial system.
Barnes and Mattsson (2017) describe mobile commerce (m-commerce) as any economic transaction involving direct or indirect monetary value, executed via wireless technology using smartphones. According to m-commerce estimates, there had been 1.8 billion worldwide digital customers in 2018, leading 21.55 percent of the world's population to be online buyers. The number is set to increase by more than 2.14 billion in 2021 (UNESCO, 2018). China's slice of the worldwide online retail pie is already more than half and will rise even more in the coming years (Statista, 2019).
With the overall strong economic shield and technological advancement integrated with the increase in globalization and international economic ties and coactions, China becomes the center of attraction. It gravitates international students, immigrant employees, traders, and foreign tourists from every corner of the world. For instance, in 2016, China stood third globally for the biggest recipient of international students, with 442,773 new students step their foot in the nation (UNESCO, 2018). By 2018 this number grew to 492,185 (10.49 percent growth over 2017) (China Ministry of Education, 2019). At the same time, according to China daily, in 2019, the number of permanent registered numbers of foreign workers in China was about 900,000. On the other hand, there were around 25 million visitors in mainland China in the year 2016 (Dong et al., 2017). Those opportunities come along with pressure and expand advanced financial services to the very people to improve their quality of time in China by making them feel comfortable and secure when they deal with the mobile payment system (Tampuri, Kong and Asare, 2019).
The People's Republic of China as the world's largest digital retailing market deserves special attention to understand its dynamics in the commercial landscape and its financial inclusion mechanism. Adequate managing online store that hasten consumers' satisfaction through mobile payment technology is a crucial factor not only for the diversified source of income but also for the sustainable growth of the economy. The proliferation of online shopping has stimulated widespread research to attract and retain consumers from either a consumer or a technology-oriented view (Delafrooz et al., 2009). Customer's satisfaction of online payment stores is directing to a positive outcome like trust, satisfaction (Fassnacht and Köse, 2007), customer referral, retention, e-shopping stickiness, online conversion (Ranaweera et al., 2008), and online loyalty (Anderson and Srinivasan, 2003; Fassnacht and Köse, 2007; Chiou and Chang, 2009). Although the number of foreigners in China is not significant considering the size of the nations' population, they are an important link and technology transfer between   China   and   their   respective  countries. Thus, they need to have access and usages of advanced digital financial services, including mobile payment, without security concerns. They must undertake their day-to-day activities, make and receive payments, and stay connected and productive (Tampuri et al., 2019). The objective of this study is to investigate if foreigners living in China have security concerns when they are dealing with the mobile payment system and if there is a significant change in their consumption trend post-adoption of the m-payment system. Despite the wide varieties of studies directing mobile payment adoption intentions, there are limited (if any) studies connecting those dual objectives. This study’s’ outcome is not mainly to understand the security perceptions and concerns of foreigners residing in China but also to contribute useful insights into how money representation might affect consumption behavior.
As a base theory, the current study applies Davis's technology acceptance model (TAM) (Davis 1989). This theory is reputable for its expressive power in explaining Information System (I.S.) adoption behavior in the previous studies. But several empirical works have found that TAM only explains a specific portion of the variance related to usage intention and action (Venkatesh and Davis, 2000). Therefore, the present research extends TAM's model by including two central determinants of security-related constructs and one post-adoption construct. The aim is to emphasize how those constructs could affect the decision to adopt and how those determinants change users' spending behavior over time. 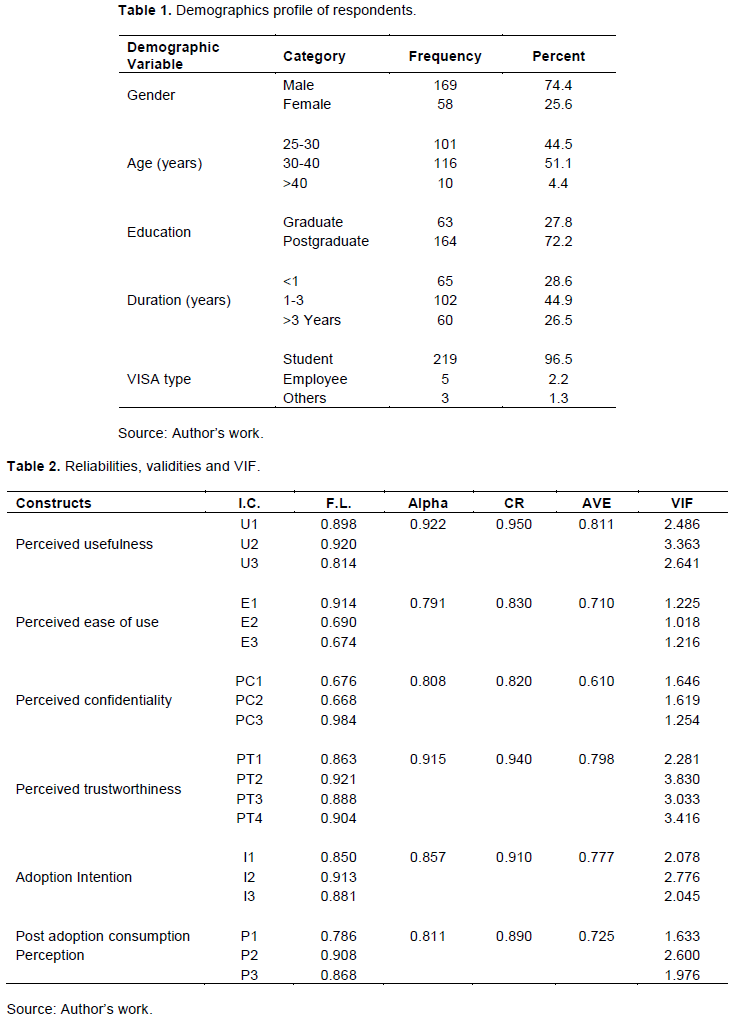 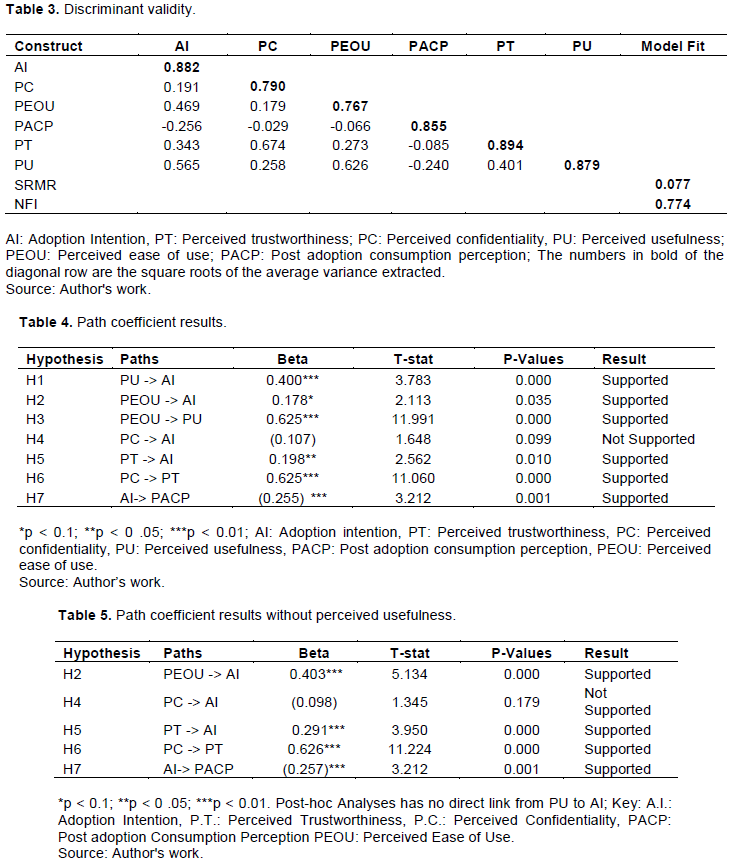 Based on the result of this analysis (see Appendix A), we found that PU partially mediates PEOU as the path coefficient becomes strongly significant. This result is consistent with Davis (1989)’ argument that perceived ease of use might indirectly influence intentions to adopt a specific technology through usefulness. Assessing the dual subjective security, building blocks in adopting mobile payment technology, we find that perceived trustworthiness is a significant determinant factor of m-payment adoption intention with beta 0.175 at p <0.05 and hence supported the prediction of H5. This is in sync with the results of Dahlberg et al. (2003) surprisingly enough; however, unlike the products of Pousttchi (2003) and Pousttchi and Dehnert (2018), Perceived Confidentiality has shown to have a negative beta but statistically insignificant factor on the adoption of mobile payment system among foreigners in China. Thus, the result rejects H4. Nevertheless, in line with our prediction of a positive relationship between perceived confidentiality and perceived trust, the study reveals a strong positive correlation between those two antecedents of security with β=0.625 and p<0.01; hence H6 is supported.
The final set of analyses analyzes the important negative impact of the adoption of the mobile payment system on users' consumption behavior. Based on the assessment result, adoption intention and actual usage have a negative and significant determinant on foreigners' post-adoption consumption perception with beta -0.255 and p<0.05. Even though the variance explained by AI toward PACB is very low (6.6%), H7 is still supported (Figure 2). 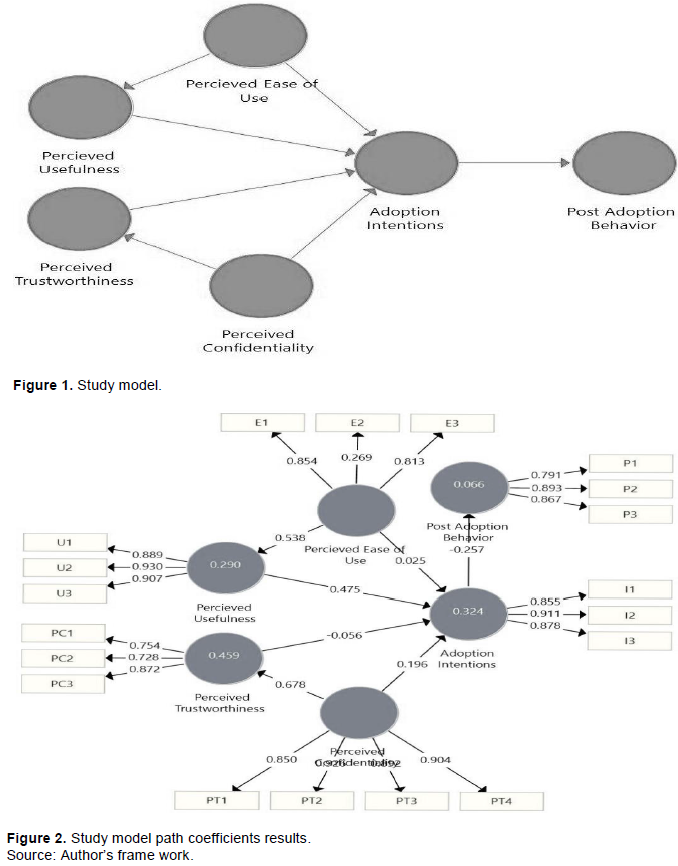 The authors are indebted to Mr. Muhammad Zahid Nawaz and Mr. Mussie Tewelde for their valuable contribution and assistance.