Few works are considered to the empirical literature on the performance of shariah stock market indices compared to those of conventional markets. This work deal with the analysis of business cycle synchronization of five Islamic and their corresponding conventional markets over the period 2000 and 2014. In this research, three different measures of synchronization were proposed: The pair wise correlation coefficients of the cyclical components, the pair wise correlations of stock market returns and the concordance index. Results suggest a high degree of synchronization between Islamic and Conventional stock markets to each pair of country, except the case of Indonesia. These results confirm the point of view of some Muslim scholars considering that the mechanisms and products adopted in Islamic finance are similar to the Conventional system under the label of Shariah.

Generally, economic and financial integration among a group of countries lead to common shocks that contributes to a deeper synchronization of business cycles between countries that belong to this group. Many authors are interested in the study of financial cycle synchronization, especially during financial crises, as it has an important and heavy impact on real world activity. The recent global financial crises highlighted the importance of the Islamic financial system as this crisis had largely hit the conventional system compared to the Islamic system which is considered as a regulating sector. The severity of this crisis motivated the researchers to study the comparison between Islamic and conventional financial systems. Some authors are interested in the analysis of the main differences between both systems by the analysis of the performance and others by the analysis of financial cycles and synchronization between the two systems. The main goal of this study is to analyze the synchronization between Islamic and Conventional stock market indices and the interaction between Islamic stock indices.
In finance, it is proved that disruptions are relatively larger than booms. In effect, financial cycles are characterized by longer and deeper episodes of downturns and synchronization of financial series are in many cases high. For example, Claessens et al. (2012) are interested in the analysis of financial cycles across industrial countries. They found that the degree of synchronization between credit and housing price is larger than that of credit and stock prices. Calderon and Serven (2011) found evidence of high degree of synchronization of financial cycles in Latin America. They concluded that financial cycles are long and deep and that they are highly synchronized across countries. According to the study of Schuler et al. (2015) which is applied to 13 European Union countries, they indicated that for most countries the degree of synchronization in financial cycles is higher than that of business cycles. Meller and Metiu (2015) found in their analysis among 12 European countries that countries with more highly correlated business cycles tend to have more synchronized credit cycles.
Business cycles are representative of periods of relative growths and periods of relative stagnation or decline. In this work we consider the growth and the decline between conventional and Islamic financial markets and we measure the synchronization among market returns.  Many methods are considered in empirical literature to measure synchronization; some methods are based on the correlation coefficients of growth rates, others considered the correlation coefficients of the cycles. To extract cycles from series many techniques have been developed in literature. One of the data filtration techniques that can be cited is the Hodrick Prescott filter (1982). When correlations are high, synchronization is high between series. Sebastian et al. (2003) consider two main approaches to locating the expansionary/contractionary phases of the cycles in a financial variable. The first one advocates a parametric specification of the data generating process, where two different regimes are allowed. The second approach takes a nonparametric perspective and, instead of fitting a fully specified statistical data generating process, looks at the original data series for the specific features of the cycle. That is, this procedure looks for periods of generalized upward trend, which will be identified with the expansions, and periods of a generalized downward trend which will be identified with the contractions.
As the correlation coefficients only measure linear relationships between two variables and therefore the results are not accurate for nonlinear cases, other measures of synchronization have been considered in the literature. Harding and Pagan (2002, 2006) and others proposed indicators to assess business cycles synchronization. We will focus in this analysis on the measure of concordance index as suggested by Harding and Pagan (2006). They proposed to calculate a concordance index based on the proportion of time where two series are in the same state. A binary variable for each series is constructed, Sit and Sjt for countries i and j to indicate the state of the economy (it takes one when the state is in an expansion and zero when it is in a recession). The concordance index is written as follows:

For this index we measure the percentage of time where two series share the same phase (recession or expansion). This index lies between 0 and 1, where a score close to 1 indicates a highly symmetry between series and then there is a high significant synchronization, a score close to zero implies a highly asymmetry whereas a score approaching 0.5 indicates no concordance between series and then no synchronization. To apply this method of concordance, firstly we have to determine the state of each series in the date t (recession or expansion). Parametric and non-parametric methods are developed in the empirical literature to construct a binary variable, named St, which represents the state of the economy. In this paper we employ the Markov switching method to construct this variable. Markov switching models are nonlinear models known by their success in explaining business cycles. These models are succeeded in capturing recession and expansion phases which are controlled by a latent state variable, called St that follows a first order Markov chain. For the case of two state model, the unobservable variable St is binary and it is determined from the filtered and the smoothed probabilities where St = 1 if the probability of staying in state one is greater than 0.5.
According to the concordance index, we obtain a score lying between 0 and 1 but we cannot say whether synchronization is significant or not. To overcome this limit, Harding and Pagan (2002) proposed the following equation:

to be the dependent variable and we estimate this equation by, the Generalized Moment Method taking into account heteroscedasticity and serial correlation. After estimating this equation, we use the following test:

Data
As we are interested on the measure of conventional and Islamic synchronization of the stock market indices, we consider a monthly data base of five Islamic and five conventional stocks that belong to the same financial group covering the period January 2000 to October, 2014. Stock indices selected in this study are collected from the Thomson Reuters database. Table 1 presents the selected series.

Table 4 presents the results of estimated Markov switching models. From this table we can remark first of all that the results for all estimated models are qualitatively similar but quantitatively there are some differences. The likelihood ratio test rejects the null hypothesis of absence of regime change for all estimated models. The estimates presented in Table 4 shows that, during the sample period corresponding to each series, the model detect recession and expansion phases with the only exception of the Islamic and conventional Malaysian stock indices where the growth rate is positive for both regimes but not significant for the first regime. In this case, we consider the first regime as a low growth phase whereas the second regime as a normal phase. For all cases, the total duration of remaining in regime 1 (recession or low phase) is shorter than remaining in regime 2 (expansion) which means that contractions have low persistence than expansions. But durations vary from one stock market index to another. For example, the conventional index of Jakarta stay 87.2% of time in an expansion phase with a duration of 154.5 months out of 177 observations, while it stays only 61.4% of time for the case of the Hong Kong conventional index. Contractions are shorter and more severe than normal phases of growth rates. In effect, for all series the volatility of remaining in a contraction phase is larger than the volatility of staying in an expansion phase implying that declines in recession phases are deeper than expansions. 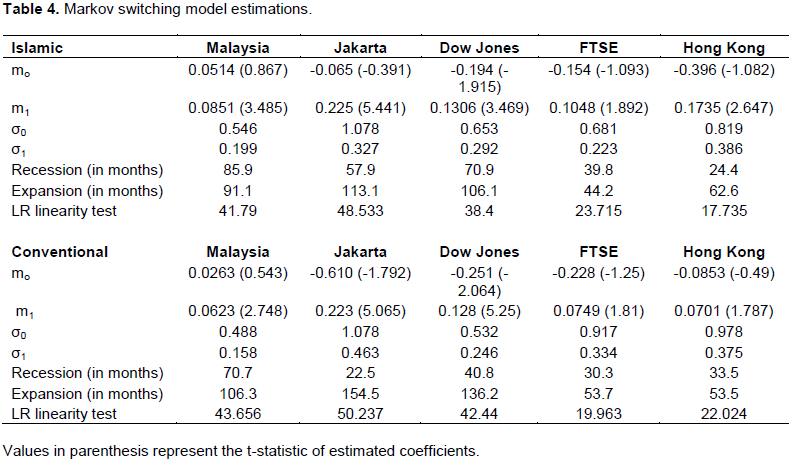 Figure 1 presents the smoothed probabilities obtained from Markov switching model for all stock market indices.
The first panel (a) shows the probability of staying in the  expansion  regime  of  the  Islamic  and  conventional stock indices for all pairs of countries: The blue solid line refers to P(st = 1| yt−1) in our estimated model for the Islamic stock index, while the red dashed line corresponds to the probability of staying in the same regime for the conventional stock index. It is clear from these graphs that the expansion regime tends to appear persistent than the recession phase for the two series. We remark a very high correspondence between Islamic and conventional Malaysian stock market. Moreover, a comparison of the series shows that the synchronization between the series seems to be very high. In Panel (b) we present the smoothed probabilities of staying in expansion phase for Islamic stock indices while Panel (c) correspond to the case of conventional stock indices. Contrary to the previous Panel, we remark that the smoothed probabilities of Jakarta stock index (Islamic and conventional) are different to the other markets indicating then a low synchronization between Jakarta stock market index and the others. 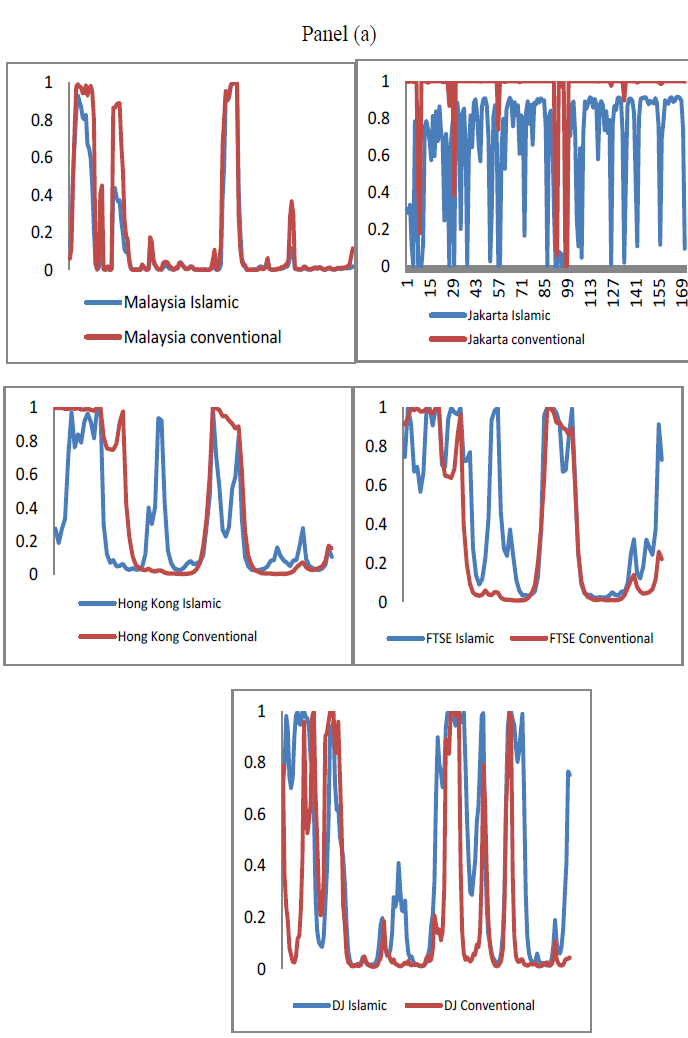 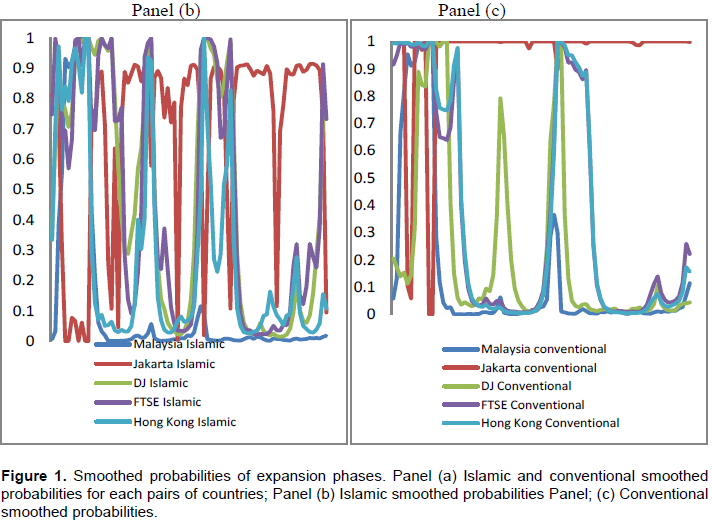