Power  sector  is  important  for  the development  of  any nation. The power supply sector  was included  in  India’s

five-year plans in the year 1951. Liberalization initiative by the Government of India in 1991 resulted in formation of independent power distribution companies (DISCOMs) in different states. The Electricity Act 2003 shifted the power sector from regulated business to a competitive business. Several studies have established a positive correlation between the trained front office managers and customer satisfaction. Reports from various institutions have suggested that inadequate training of frontline managers at Indian DISCOMs in new technologies and commercial practices is resulting in inefficient operations and customers’ dissatisfaction (World Bank, 2014). Indian electricity distribution system has nearly 200 million consumers with a connected load of about 400 GW (Shekhar, 2014). As per Power Finance Corporation’s report, electricity customers in India are served by about 73 Distribution Utilities, 13 Electricity departments, 17 Private Distribution companies, 40 Corporatized Distribution Companies and three (3) State Electricity Boards (Alam et al., 2014). This places India amongst the largest electricity consumer bases in the world.

The amendment of Supply Act (1948) in 1991, followed by the enactment of Electricity Act (2003) and notification of Mega Power Policy (1995), National Tariff Policy (2005), National Electricity Policy and Integrated Energy Policy has led to restructuring and unbundling of the erstwhile vertically integrated state electricity boards into independent generation, transmission, and distribution companies. These new legislations consolidated the position for existing laws and aimed to provide measures conducive to the development of Indian electricity industry. They have addressed certain issues that had slowed down the growth of sector in the country, and have consequently generated new hopes for the electricity industry. These independent companies are supposed to be managed on a commercial approach basis. The role of senior engineers has now shifted from a purely government controlled technical management to business management in a corporatized framework.

Indian Energy sector is expanding fast. As per IEA’s report (2015), India’s electricity demand from 521 terawatt-hours (TWh) in 2000 has raised to 897 TWh in 2013; showing an average annual increase at the rate of 6.9%. Also a rapid increase in household electricity consumption is expected in forthcoming years (Figure 1). 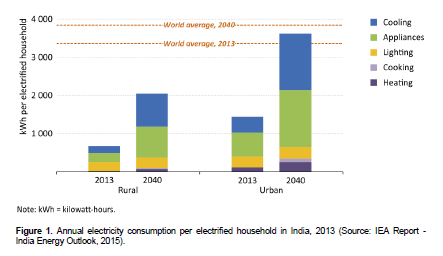 The IEA 2015 Report states that there is a rise of 25 to 35% in the estimated requirement for semi-skilled and skilled workers which comprises of engineers, project managers, and technical staff. An official document of Ministry of Power (2012) has quoted that DISCOMs’ manpower is not trained in the new technologies and practices resulting in performance deficiency and reduced customer satisfaction, demanding regular updating of employees’ skills. Article 5.1 of Government of India’s National Training Policy (2002) underlines that training was earlier being considered as an optional activity. There was an inadequacy of trainers and insufficient training facilities in power sector. The customers’ satisfaction surveys carried out between 2007 and 2012 in few Indian States also find that a large population of electricity customers is not satisfied with DISCOMs’ services. World Bank’s 2002 Report also underlined that distribution utilities need to focus on enhancing  customer  satisfaction  by  providing   efficient and reliable service in India as there 80% of the revenue is generated from the 20% of customers account.

The identified research gaps based on literature review are presented in Table 1.

The lately formed DISCOMs generally have their corporate headquarters in the capital of state of major cities in different regions.  DISCOMs additionally have their field offices in towns, sub-urban, and rural areas. The field offices are headed by middle managers (Superintending Engineers and Executive Engineers) who are the immediate superiors, supervisors, and mentors of frontline managers of DISCOMs. They implement strategies and policies of top management through managers reporting to them. This has become more relevant as consequent to the reforms, many new technologies have emerged in the electricity distribution sector (Mehta and Madhav, 2010; Core, 2002; Okora et al., 2007; Padmanabhan and Sarkar, 2002; World Bank's Report, 2002).

Managing talent in electric utilities is a big challenge in India. Average age of employees in most of the state-owned utilities is around 50 (PWC, 2011). Recruitments in the majority of the utilities have either stopped or have been sporadic over the past 10 to 15 years, with some of them resorting to contractual employment to fulfil their manpower   requirements   (PWC,   2011).   This    further impact on the efficiency of the operation of the utility. With engineers and other technical personnel being disinterested to join the utilities, utilities often have to engage personnel on contract or outsource some of their core operations to agencies that claim to perform such jobs which the utility desires. Regrettably, most of the times, such personnel are found to be under-trained or unskilled to be able to deliver the requirements of the utilities (PWC, 2011).

Frontline managers (FLMs) in DISCOMs are the field officers mainly Assistant Engineers and Junior Engineers who are posted at operation and maintenance offices in the town, sub-urban, and rural areas (Vishwakarma and Dwivedi, 2013). They head the field offices which is basically a miniature of the DISCOM. FLM’s  are  the  first or second level managers directly responsible for production of goods and services and supervision of employees, who report to them but do not themselves have any managerial or supervisory responsibility (Sirbasku, [MS1] 2011). FLM’s are responsible for the basic work of the organization by coordinating the work of line staff in accordance to the standards, which have been set by higher management (Bartol et al., 1998).

Talbott (2013) in his discussion paper “Lighting the Way: Unlocking Performance Gains in Electricity Distribution and Retailing in India” has underlined that poor management practices at Indian DISCOMs present obstacles to more efficient operation and improved financial performance by distributors. An official document of Ministry of Power (2012) quotes that the low levels of computerization and inadequate IT systems has made it difficult to track sales and collection rates and pinpoint sources of aggregate technical and  commercial (AT&C) losses. Beattie (2006) states that supervision is the most important element in a learning system, providing a pivotal link between individuals and their manager, and between individuals and the organization as a whole. World Bank’ report (2005) on “Improving Power Distribution Company Operations to Accelerate Power Sector Reform”, suggest that utility’s CEO must lead operational reform, taking a holistic view of the process. Performance improvement should be the utility CEO’s number one priority. Only the CEO has the breadth of vision and the depth of influence to make the most difficult and far-reaching reforms happen - collection, internal control, enforcing disconnection policy, and many similar initiatives (Antmann, 2009)

This study was confined to only four DISCOMs operating in central India for the focus of selection of population for the data. Reforms in Indian power sector were introduced in 1991. There is  a  shortage  of  published  literature  on

Training Need Analysis (TNA) at Indian DISCOMs and competency mapping of frontline managers in particular for TNA. The researcher could not get many references to compare the results of his study.

Future scope of the study

This study paves way to further this research covering all or most of Indian DISCOMs. The future study may focus solely on the intermediate effect of the ‘Non-Training Issues’ in Training Need Analysis.

The Indian power distribution companies (DISCOMs) adopted new technologies and commercial practices but the manpower is not adequately trained on them, which is resulting in inefficient operations and customers’ dissatisfaction.

The study aims to identify significant competency deficiencies to be addressed in the training for improving performance of frontline managers in Indian power distribution sector.

What are the competency areas in which FLMs need training in the Indian power distribution sector?

Questions on 3-point likert scale (1 - Very Important, 2 - Fairly Important, 3 - Not Important) were framed based on the outcome of the literature review to develop a questionnaire (Appendix 1). The questions covered 31 skills and competencies in technical, commercial, and managerial areas that appeared mandatory for DISCOMs’ frontline managers.

Reliability and validity of the instrument

Cronbach’s Alpha value was calculated 0.713 suggesting internal consistency of items and reliability of the instrument. Validity of the questionnaire was established using data reduction technique. Questionnaire was tested for convergent and discriminant validity. Average loading of all extracted components was greater than the minimum acceptable value of 0.7 suggesting convergent validity for all extracted components. Variance extracted between all components was greater than the correlation square between them (Fornell and Larcker,1981).

The questionnaire was pre-tested on 10% population of respondents.

was quite high and acceptable confirming internal consistency (reliability) of data. Acceptable Cronbach's alpha values range from 0.70 to 0.95 (Tavakol and Dennick, 2011).

For the KMO statistic, Kaiser (1974) recommends a bare minimum of 0.5 and that values between 0.5 and 0.7 are mediocre, values between 0.7 and 0.8 are good, values between 0.8 and 0.9 are great and values above 0.9 are superb (Hutcheson and Sofroniou, 1999). For these data, the value is 0.870 (Table 3) which falls into the range of being great. Researcher was therefore confident that the sample size is adequate for analysis. Bartlett test results show that the

Out of the total employees’ strength of 49395 indicated in Table 4, 670 middle managers of four DISCOMs were under 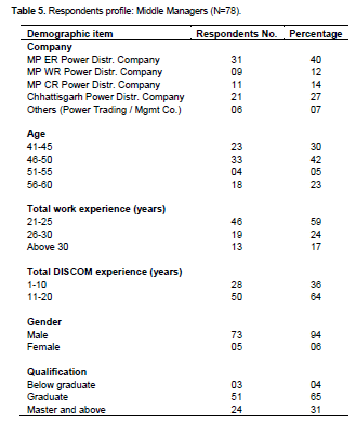 Competency mapping of DISCOMs’ FLMs by their immediate superiors 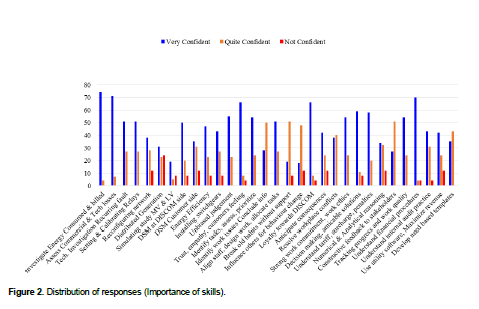 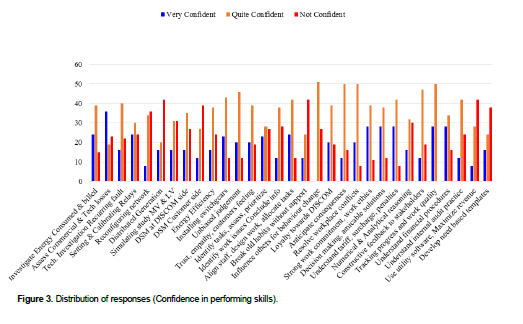 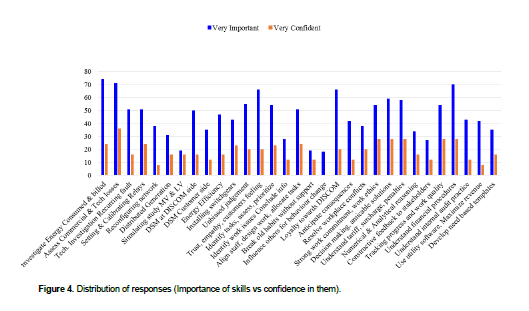 To understand the present competency of the FLM’s under study and impact of past trainings being provided to them feedback from their immediate Supervisors were taken. Theimmediate supervisors gave their rating on the scale of 1 (low) to 10 (high) presented in Table 6. The impact of past trainings on competency is also collected. All responses are presented in Table 6.

Further to identify whether the competency rated by age and experience of FLM’s correlation matrix is presented in Table 7. 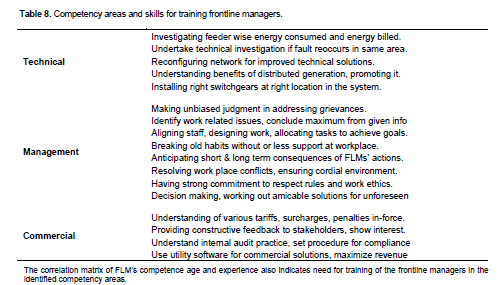 Training has always been a dedicated wing at the erstwhile state electricity boards and the lately formed DISCOMs subsequent to reforms. However, as underlined by Ministry of Power’s reports and other organizations, it lacked the required infrastructure and not always received adequate attention. The training policies were formulated at the top management level without much consideration of the opinions of middle managers and employees’ immediate superiors.

This study has focused on collecting and analyzing the opinion of middle managers in-particular in the changing scenario after reforms with increasing customers’ expectations. Erstwhile state electricity boards and DISCOMs are aware of the training needs of their personnel but they may consider using these results to frame their training policies and plans with a broader perspective. Most of the training in the identified technology areas can be organized under technology transfer agreement with the manufacturers and product developers at the procurement stage itself.

Training in managerial and commercial areas can be organized through higher institutions. Long term training agreements can be made with the power training institutes and professional trainers who can preferably give on-site training in customer relations and utility software. Services of retired managers of same or co-organizations can also be contracted. The class room training for frontline managers needs to be supported with on-site training and on-line refreshers. Management should also keep a continuous evaluation of their training

programs, and collect feedback from the trained personnel for making improvements wherever needed.

Authors are grateful to DISCOMs’ middle managers for sparing their valuable time and efforts in responding to the questionnaire and sharing their experiences for the study.