Application of the grounded theory in building leadership models by utilizing the leadership styles. A focus on Pentecostal churches in Zimbabwe

Leader-follower relationship is one element that is crucial to the influence and growth of churches.  When the leader maintains control and interacts constructively with the followers, understanding the levels that they are at; the likely outcome is a strong organization. The researcher using the grounded theory came up with the Ordinary-Questioning-Decision Making-Stability and the Contextualized Leadership-Follower models that could assist Pentecostal churches in Zimbabwe to build a strong committed membership base. The grounded theory allows data collection, analysis and eventual theory or model to stand in close relationship to one another. The constant comparative approach under the grounded theory was adopted. Christian leadership is not restricted to within church walls but is also effective in the public arena such as profit –making –organizations.  The first model entails that leaders identify the levels that their members are at and groom them accordingly using the various leadership styles in the second model.

Hussey and Hussey (1997, p.249) identified two methods of analyzing qualitative data; the quantifying methods and the non-quantifying methods. The grounded theory, initially the work of Glaser and Strauss (1967) using the constant  comparative  method by Maykut and Morehouse (1994, p.135) was adopted as shown in Figure 1. Under the grounded theory, data collection, analysis and eventual theory stand in close relationship to one another (Strauss and Corbin, 1998, p.12). According to Bryman and Bell (2003), data collection and analysis proceed in tandem, repeatedly referring back to each other. It allows the researcher to shape and reshape their data collection thereby allowing refining of data. Data is analyzed as one goes along rather than saving all the material u for one major analysis-fest, because themes will be emerging all the time and they need to be recognized, organized and taken account of (Fisher, 2010, p.418).  Despite criticisms to this theory, the grounded theory remains one of the most influential strategies in the analysis of qualitative research (Bryman and Bell, 2003). Unlike other methods of qualitative analysis which acquire rigour through multiple levels of confirmation or triangulation (Mertens 1998). Grounded Theory builds an analytical case by constantly seeking new categories of evidence. The grounded theory is unencumbered by explicit expectations about what the research might find, or by personal beliefs and philosophies allowing the researcher to make discoveries without a priori knowledge.  Other researchers using the same method are equally likely to derive empirically grounded explanations for other social processes which have equal substance in any given field of investigation: the constant comparative method is not designed (as methods of quantitative analysis are) to guarantee that two analysts working independently with the same data will achieve the same results (Glaser 1967, p.103). The choice of this method was based on the fact that there is no preconceived theoretical framework and there is simultaneous data collection and analysis.  According to Maykut and Morehouse (1994), the comparative method combines inductive category coding with a simultaneous comparison of all units of meaning obtained. 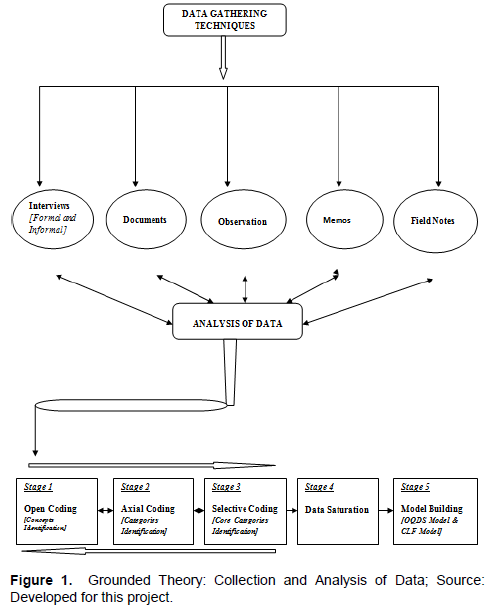 The final result of research using Grounded Theory as a method of qualitative analysis is theory or model building (Mwenje, 2015). Grounded theory enables the researchers to focus their data collection and to build inductive middle-range theories through successive levels of data analysis and conceptual development (Denzin and Lincoln 2005). The constant comparative method facilitates the generation of theories, process, sequence and change pertaining to organizations, positions and social interaction (Glaser and Strauss, 1967). As indicated by the results, Pentecostal churches rely on followers for numerical growth, financial growth and spiritual growth and economic growth within the church. Pentecostal churches therefore need to build their people from within to a level where the members are loyal to the church and can participate in church activities such as giving financially and other projects such building projects. The OQDS and CLF models developed in this research are an important tool in achieving such results.
The influence of leaders on the followers becomes key to the development of  Pentecostal  churches.  According
to Guti (2005), a leader is one who knows the way, goes the way and shows the way. In other words a leader is an active participant in the day to day activities of the church which include grooming people which is the basis upon which this model was built. Guti (2005: 25) further articulates the essence of a leader saying a leader is a person with a magnet in his heart and a compass in his hand. Building up from the findings, it is possible to construct a model based on four levels that would be found in all Pentecostal churches.  These levels comprise the following; the ordinary level, the questioning level, the decision-making level and the stability level from where the Ordinary-Questioning-Decision Making-Stability (OQDS Model) as depicted. In building the levels, the researcher realised that Pentecostal church leaders attract the following people in their church discussed under the following four levels as depicted in Figure 2. 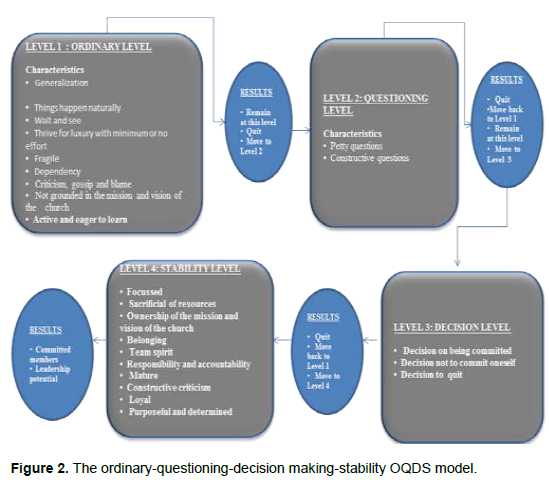 The influence of leadership styles can be measured by the effectiveness and impact that an organisation has had. This can be in the performance and growth of the leaders’ group, the preparedness to deal with challenges or crises,  follower  satisfaction  with  the  leader,  follower commitment to the organisation’s objectives and the extent to which it performs its task successfully and attains its goals. As shown in the CLF Model in Figure 3, the results and the final outcome are key areas. The results create an environment that allows for the final outcome  to  be  achieved.  A   strong   church   that   has committed members is the final goal of most leaders. 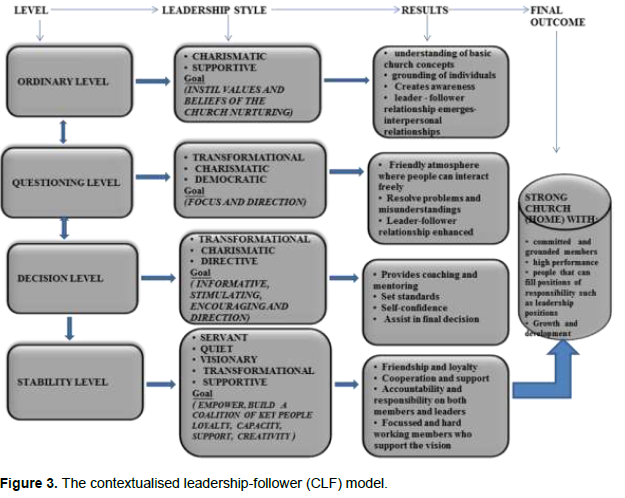 Practical implications
This is a practical study that identifies the different levels that subordinates go through which leaders should take into consideration when implementing leadership strategies. Different leadership styles that relate to each level were identified which can be applied to both non- profit and profit making organizations.
Limitations
The study was limited to Pentecostal churches in Zimbabwe. A further study that compares the current study with other countries would broaden the scope of Pentecostal leadership in different settings.
Notes
The data presented in this research is the author’s original work.