The paper aims to enrich the academic debate on social impact investing, through a formalization of Development Impact Bonds (DIBs)’ structure. With this purpose, the research adopts an inductive approach and presents a case study analysis of the world’s first successful DIB in education, Educate Girls Development Impact Bond. The analysis fosters the role of DIBs as tools to provide funds to non-profit organizations operating in developing countries, by reducing agency problems between investors and social services providers, and by mitigating goal displacement effects. 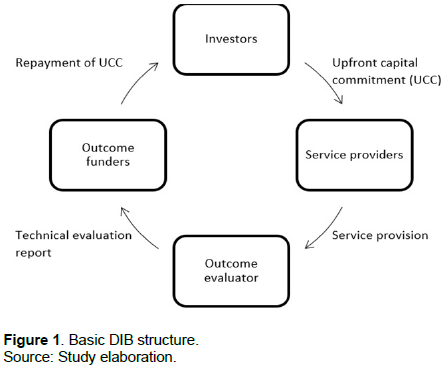 Through a careful literature review and an in-depth case study analysis,  our  work  offers  some  insights  for DIBs implementation based on current best practices. Summing up, it suggests that DIBs might be a viable option to tackle relevant societal issues. Furthermore, our findings may contribute to the academic debate in several ways.
First, it highlights DIBs may encourage private investors and non-profits to bridge institutional gaps (Starke, 2006; Joy and Shields, 2013). Private investors may find in DIBs a complementary investment vehicle for their funds. Even though risky, DIBs allow partners to build upon NPOs’ experience (Gazley and Brudney, 2007). DIBs can attract capital otherwise disregarded by traditional intermediaries (Mendell and Barbosa, 2013).
Second, it suggests DIBs may provide funds to NPOs willing to tackle riskier interventions. DIBs may be a tool for reducing the cost of capital of non-profits. By diversifying revenue sources, NPOs can try minimizing risks (Jegers, 1997; Kingma, 1993). We did not observe negative effects because of the private investor’s involvement in the DIB. An explanation for this might be that the DIB accounted for a small fraction of Educate Girls’ total funding. Since stakes were low, many of the problems identified by the literature did not arise (Jang and Feiock, 2007).
Third, DIBs seem to mitigate agency problems that arise in the initial phase of a deal (Davis et al., 1997). When agents lack trust in contractors, relationships become control-oriented and hierarchical. This happens because capital providers need control mechanisms and quantitative values to refer to interventions. Reduced agency costs characterize later partnership stages, and the same happens in DIBs. When designing DIBs, players seek to increase their control. Investors want achievable outcome measures to achieve repayment faster. Service providers want achievable outcome measures to prove that they’re worth additional funds. Outcome funders prefer a fair evaluation process, since they must pay back investors. All those contrasting needs determine high negotiation costs, which drop once they sign the contract. And when criteria are clear, the relationship-building process takes place. Thanks to intermediaries and because of contract design, DIBs can create a shared platform with clear metrics upon which to build lasting partnerships. Educate Girls implemented performance management systems which increased its accountability towards stakeholders. In addition, the relationship-building capacities needed for operating the DIB will be of use for future projects.
Fourth, DIBs seem to mitigate goal displacement effects that occur when funders divert non-profits from their targets (Froelich, 1999). When investors lack trust in payees, the need for monitoring arises. Required controls, those of federal agencies, may become pervasive. Guarantee accountability requires time and resources, and so NPOs may divert from their mission for the sake of funds. They can adopt equity-based distribution    policies,    thus   resembling    governmental agency behaviour (Lipsky and Smith, 1989). Goal misplacement effects in DIBs seem less significant. This may be because of the different nature of the funder, while governments need bureaucratic conformity, private investors only care for revenues.
Last, DIBs seem best suited to experienced NPOs and service providers. Since societal issues require cost-effective interventions, validated business models ready to scale may be the best option for DIBs players. It’s not a case that Educate Girls contracted the DIB in its “Scale” phase (Dasra, 2014). Back then, the NPO replaced its data collection system and tested its performance based on activity, output, and outcome-based indicators. Improving the cost structure was one main concern of Educate Girls in years 2014-2017. Displayed in Table 1 is the general pattern of cost declining. Table 1 reveals a sharp increase in the monitoring and evaluation budget. Annual cost per beneficiary peaked in 2012-2013 when the NPO introduced outcome-based indicators. Annual costs per beneficiaries and per school are likely to continue decreasing: targeted values are $ 2,06 per beneficiary and $270 per school.
Some limitations affect the present study. We didn’t perform a triangulation of empirical evidence by recurring to different data collection methods (Yin, 2014). This was because of time constraints and difficulties in identifying and reaching the key actors for potential interviews and surveys. We recognize that selection bias could affect our analysis. We also opted for a theoretical sampling because of the lack of alternatives (Gustafsson-Wright et al., 2017).
The present study contributes to the expanding field of impact investing (Agrawal and Hockerts, 2019) by providing a detailed analysis of a DIB best practice. To the best of our knowledge, this is the first comprehensive investigation of a successful DIB. The data reported here appear to support the assumption that DIBs are a viable tool for both investors and NPOs and that government should then place greater attention on such a new form of financing of publicly relevant projects. Practitioners may refer to this work when dealing with DIBs design in developing countries. In fact, insights gained from this study may be of help to all the parties involved in a DIB contract. Investors might contrast the legal setup of a potential DIB with the one described previously in the present paper to see if opportunistic behaviours from service providers or from other contractual parties are likely to arise. Service providers might refer to the present investigation to learn how Educate Girls adapted its organizational structure to meet the needs of capital providers. Outcome evaluators may check how the evaluation process took place and how IDinsight handled “cherry-picking”. Lastly, outcome funders may check how the payment structure of a DIB might increase the likelihood of easy disbursement and which remedies devise to avoid it. We also aim to suggest future research avenues for scholars. First, our paper may make up the basis for future cross-case or cross-country comparisons. Second, the reduction or agency costs   and  of  goal  displacement  effects  require further examinations. Third, as done for social impact bonds (Del Giudice and Migliavacca, 2019), researchers should clarify the role of institutional investors in DIBs.