The integration of smallholders with the market is essential to provide enough food for the growing populations in most African countries. The existing literature emphasizes in that respect the role of transaction costs. This paper offers a complementary view, namely individual-level market learning, which is conceptually integrated in the existing market integration framework. The paper demonstrates that market learning will play a mediating role between the traditional factors studied in the export market integration debate, like the state of the infrastructure, the possession of assets and access to (micro) credit. A higher level of market learning will strengthen market integration, and subsequently increase food availability on the market and improve smallholders’ livelihoods. The implication is that in addition to strengthening factors that reduce transaction costs, policy-makers should design and implement interventions that help smallholders to develop more insights in their market as a basis for individual-level decision-making.

In most African countries, agriculture is an economic sector of substantial importance. In Sub-Saharan Africa, it accounts for about 30% of the Gross Domestic Product (GDP), 75% of total employment, and 40% of total export earnings in the region (Reij and Smaling, 2008; Hazell, 2013). Agriculture is in this part of the world dominated by smallholder farmers (Ochieng, 2007). However, smallholders face difficulties in accessing markets to sell their produce, causing a decrease in their living standards and a lower market availability of food ((Van der Heijden and Vink, 2013; Lyytimäki et al., 2011). Improving access to markets is therefore an important way   to   ultimately reduce  poverty  (Piampongsant  and Ingco, 2003; Kitinoja et al., 2011; Kader, 2012).
Smallholders typically produce for subsistence while the surplus is sold at the market (Fafchamps, 1992; Kherallah et al., 2002; Poulton et al., 2010). Well-functioning marketing systems may help to bring these products from primary producers to consumers. Smallholders usually sell their products to traders who aggregate the products. These, in turn, resell to other traders for further aggregation, or to formal-sector companies that may process, trade or export the products (Gabre-Madhin, 1997; Fafchamps and Minten, 1999; Arnould, 2001).
For smallholders, marketing  is, however, expensive in
terms of costs and potential risks (Meissner, 1989; Tollens, 2010). Economists have therefore investigated factors that will affect the marketing costs and risks. These factors include in particular the quality of infrastructure, the accessibility to credit, the assets owned by the household, the availability of market information, and the relationships with traders (Reardon et al., 2009). Although these factors often have a significant impact on market integration (Kabbiri et al., 2016), studying these concrete supply-side factors also has a limitation, in that they are taken from the institutional environment in which smallholders operate. This approach follows the logic that smallholders’ market integration depends significantly and directly on the institutional conditions. For example, market information is mostly seen as an institutional factor and as such approached in terms of whether or not smallholders have access to it. However, according to business researchers market information is also an individual-level factor since it should be actively acquired and interpreted before it becomes instrumental (Day, 1994; Kohli and Jaworski, 1990; Sinkula, 1994). Market information can therefore be available in the smallholders’ environment, but may not necessary contribute to the production and marketing of agricultural products that are accepted by customers. A complementary perspective is therefore necessary that emphasizes the role of market information at the individual level of the smallholder.
The academic discipline mostly concerned with that perspective is marketing. According to this discipline, a business (such as a smallholder’s “business”) basic reason for existence is to satisfy customers (Drucker, 1954). Satisfying customers entails decisions on which customers to focus on and then to specialize the business so that it can produce output that meets or exceeds customers’ expectations (Vargo and Lusch, 2004). Businesses that produce outputs that meet or exceed customers’ preferences and customers’ expectations are oriented towards their markets (Kohli and Jaworski, 1990; Narver and Slater, 1990), thereby inferring that they learn from their markets in that they generate information, make sense of it and respond to it (Sinkula, 1994; Slater and Narver, 1995).
In the same order of ideas, smallholders can generate new insights from their markets and make use of these insights in their decisions. Such a process is referred to in the following as smallholder market learning. Because market learning generates insights that smallholders make use of in their marketing decisions, incorporating the concept of market learning in the conceptual framework of market integration is a key first step in developing a more complete perspective on the market integration of smallholders.
This article offers such integration by providing a conceptual framework that is explained in the next section. The following sections subsequently explain the different components of that  framework  (the  institutional environment, the drivers of market integration, the role of market learning, and the consequences). The paper will finish with conclusions, directions for future research and concrete implications.

The general conceptual framework is portrayed in Figure 1. Four groups of variables are distinguished: market integration, market learning, the value chain and institutional environment, and the market integration drivers from the development literature. Market integration is referred to as the share of production sold by smallholders to markets (Bernard et al., 2008; World-Bank, 2008; Maertens et al., 2011). Drivers of market integration have been extensively stidued (Alene et al., 2008; Chamberlin and Jayne, 2013; Kabbiri et al., 2016), following a transaction cost logic (Williamson, 1975). Asset holdings, quality of infrastructure, access to credit, community support, and relationships with traders have been found to have direct and significant effects on market integration. The next sections will explain the relationships in the framework and integrate the concept of market learning into the previously studied relationships.
Smallholders’ institutional environment
Smallholder market learning is explained from the institutional environment in which smallholders operate. We referred to the institutional environment as the socially constructed “rules of the game” that define and control production and exchange within a society (North, 1990). Smallholders operate in a different institutional environment than traders do (local and urban traders and food companies) (Adekambi et al., 2015). Smallholders live in a rural environment that is often highly dominated by informal institutions, such as values, norms, and beliefs, while food companies belong to an environment that is much more led by formal institutions, such as regulatory rules and laws (Rivera-Santos and Rufin, 2010; Rufín and Rivera-Santos, 2013). Actors in the informal environment engage by definition in unreported activities. Although they are easy to enter for resource-poor actors (Dayaratna-Band, 2007; Fafchamps, 2001) because no fees are required for registration, it is often difficult to leave informal economies, since producers are socially embedded in a network of other actors they count on for crucial resource inputs like labour and capital (Babah et al., 2019).
In the informal environment, smallholders are usually connected to food companies  through collectors (small-scale traders who collect products from smallholders) and then larger traders (Gabre-Madhin, 1997). Collectors visit villages  that  are  sometimes remote and often buy small quantities of products that they sell to traders. Traders sell the products at informal markets and/or sell to food companies through their procurement agents. Smallholders that sell to customers in informal markets are almost by definition constrained to markets with low purchasing power that are more sensitive to price than to quality. Differentiation generally takes place more on the basis of relationship-building, like doing favours and offering credit, than on product quality (Viswanathan et al., 2010). 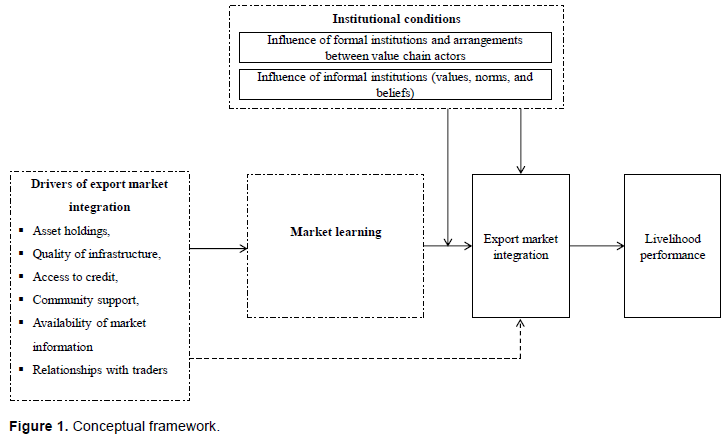 This article has integrated the concept of market learning in the market integration framework as it is suggested in development economics. The inclusion of the market learning concept also implies that there are new relationships in the framework. A deeper understanding of these relationships may be a basis for new development interventions that strengthen market learning and can further strengthen the integration level of smallholders with markets, better livelihoods for their families, better procurement conditions for companies, and in the long run a higher economic growth.
Market learning enables smallholders to select the customers/marketing channels that are most suitable for their situation and seize the opportunities provided by these customers. Companies and policy makers can influence that situation by starting new channels, thus creating new opportunities for smallholders. They can also design and implement interventions in the institutional environment of the system. Such interventions should be developed from a learning perspective, meaning that not only the content of the standards matters, but also how they are introduced and disseminated. Think for example of developing tools that help extension workers to explain standards to smallholders and developing incentives for traders to transfer information on standards or other customer preferences so that they “pull” the desired varieties and qualities from the supply, encourage smallholders to produce more of such varieties and qualities, and share information on the market expectations and risks pertaining to this channel. Such interventions help smallholders to learn about new opportunities, trade-off the risks and benefits, and integrate these in their own decisions. Depending on the farm resources and the personality of the farmer (e.g. risk aversion), decision outcomes may differ between smallholders, but the learning process enables them to choose and seize the opportunities that fit them best, and learn on how they can further benefit from the market in the future.
Directions for future research
Empirical research from a market learning perspective will be necessary to better understand the barriers for learning, the forms of learning and its relative impact. Such a research program should probably start with qualitative studies that refine the framework proposed in this article. These qualitative studies may examine how information flows from downstream food companies to upstream suppliers and smallholders. It may also obtain a deeper understanding of the barriers in the information flow, like the decisions that chain members may take about which information they move forward and what they withhold.
To understand the relative impact of market learning as a driver of market integration, quantitative studies will also be important. Future research may in that respect also draw on the learning literature to study different forms of learning from markets. One particularly interesting view is whether smallholders explore their market in order to discover new opportunities or whether they try to refine their knowledge thus developing the capabilities that help them to seize one opportunity more effectively. In the literature these two forms of learning are respectively known as exploratory and exploitative learning (Kyriakopoulos and Moorman, 2004; Atuahene-Gima, 2005).
Finally, research may study the effectiveness of interventions that aim to strengthen market learning at the smallholder level. Interventions developed from this perspective may reduce food losses and improve smallholder livelihoods. A rigorous examination of the intended effects may help the design and implementation of future interventions in that respect.