The growth determinants of micro and small enterprises and its linkages with food security: The case of Mecha district, Amhara region, Ethiopia

The study assessed the growth determinants of micro and small enterprises (MSEs) and its linkages with food security in Mecha district of Amhara region. The research was conducted to fill the empirical gaps regarding the linkages of MSEs growth with food security. Previous researches conducted in Ethiopia on the MSEs growth did not explicitly show the relationships of the growth of those enterprises on households’ food security. The objectives of the research were: to identify the determinant factors of MSEs growth, to assess the household food security status of MSEs operators, and to examine the linkages of MSEs growth with households food security status. The research was mixed research and conducted through concurrent triangulation design. The data collection methods were questionnaire, key informant interview and focus group discussions. Stratified sampling method and purposive sampling methods were implemented to select samples. The data was analyzed through a binary logistic regression and chi-square test. The findings of the study show that the factors that significantly determine the MSEs growth were government support, work premise accessibility, training, previous work experience, record keeping, possession of license and lack of market linkages. The chi-square test of independence result indicates that, there is a significant relationship between MSEs growth and the households food security status. Thus, as the MSEs grow, the households’ food security status of MSE operators’ improves.

The research approach was a mixed research. For the study, the researcher utilized both quantitative and qualitative data collected through survey, key informant interviews and focus group discussions. The research design was a cross-sectional survey design. Victor Jupp (2006) defines cross sectional survey design any collection of data from a sample of individuals (or groups) at a particular point in time as a basis for inferring the characteristics of the population from which the sample comes. For the research the data was collected at one point of time and have no time dimension.
The populations of this study were the MSEs operators at Mecha District and Merawi town administration in the Amhara region. Based on Mecha district technical vocational enterprises development (TVED) office and Merawi town administration TVED office reports, there were about 3639 active MSEs operators in 2016. A proportionate stratified sampling and purposive sampling techniques were employed to draw the samples. The researcher stratified the MSEs operators into five strata based on the type of their business sector. The MSEs sectors categorized for stratification were the manufacturing, construction, trade, urban agriculture and service sectors. The researcher took the samples through the sampling formulae of Taro Yemane (Israel, 1992)

where N is the population, n is the sample, and e is sampling error.
The researcher has employed survey questionnaire, key informant interviews and focus group discussions (FGDs) to collect primary data. Before administering the questionnaire, the researcher conducted a pre-test for about 10% of the samples. The information gathered through key informant interview was used to triangulate information collected with questionnaire and FGDs. The researcher conducted four FGDs which mainly focused on qualitative data. Check list was prepared as an instrument for collecting data through the FGDs.
The independent variables of the study were identified based on previous literatures and studies. These variables were: sex, level of education, ownership form, licensing, record keeping, experience, training, premise accessibility, market linkages and government support (Table 1).
To analyze the data collected through questionnaires, the researcher employed Statistical Package for Social Sciences (SPSS) software. The researcher applied a binary logistic regression model to identify the determinants of MSEs growth. The data analysis focuses on the binary MSEs growth outcome (Growing” or “Survival”) and which of the factors are predictive of the MSEs growth. 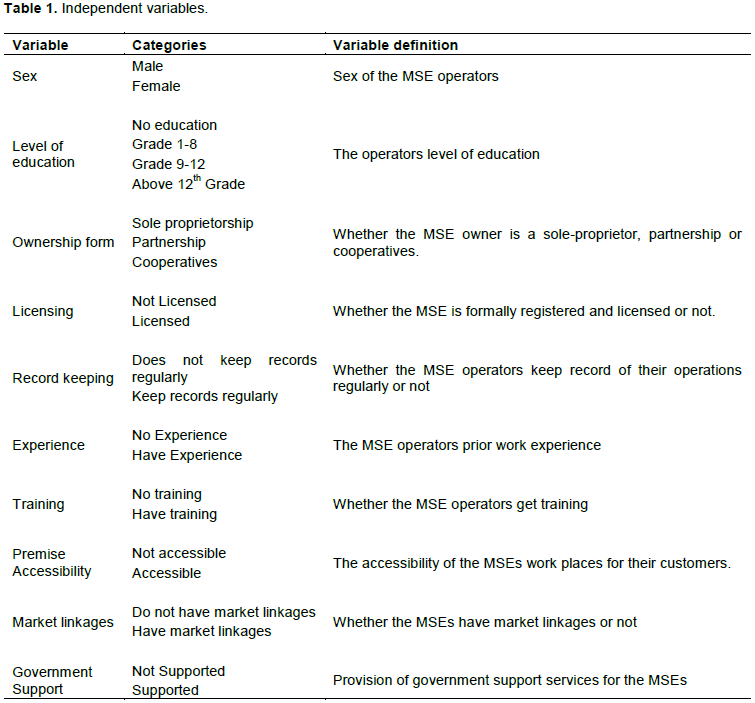 The researcher has identified the growth status of MSEs based on their employment growth. In various studies, change in employment size, sales turnover and total assets is used to measure enterprises  growth.  According to Tefera et al. (2013)it is difficult to access reliable data on the growth of fixed assets and sales hence measuring of growth through changes in employment size is objective and reliable. Similarly, Abay et al. (2014)claims that most MSEs operators/owners in Ethiopia do not keep records and they are extremely reluctant to give accounting information to external parties. Thus, it is difficult to get reliable time series data on growth of fixed assets/sales. Therefore, to identify the MSEs growth, the researcher took employment size growth as a means of measuring the MSEs growth. To do so, Evans (1986)formula of firm growth is 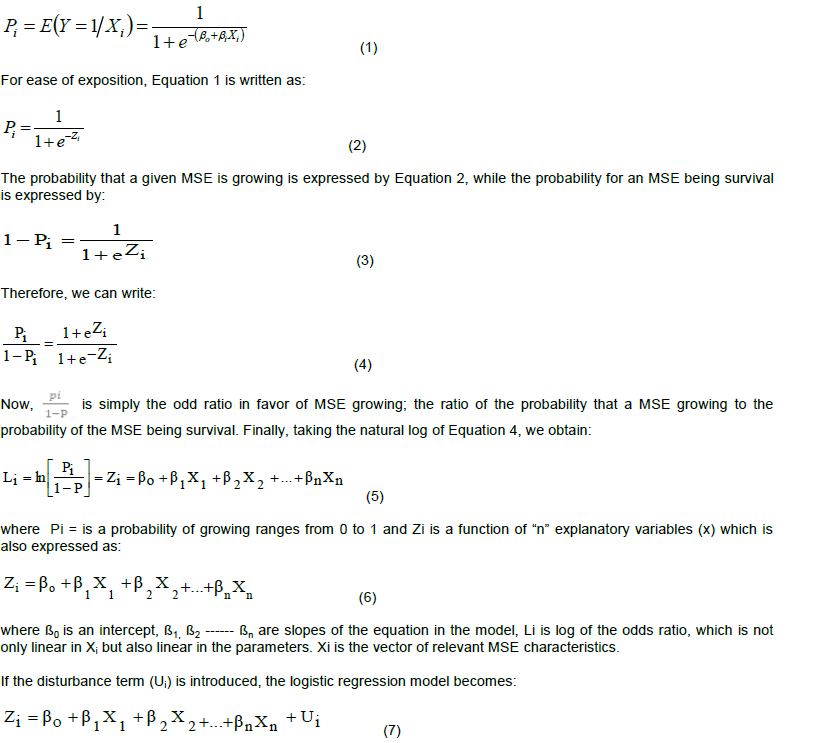 Determinant factors of the MSEs growth
The binary logistic regression model was applied to estimate the effects of hypothesized independent variables on the growth of MSEs (Table 2). 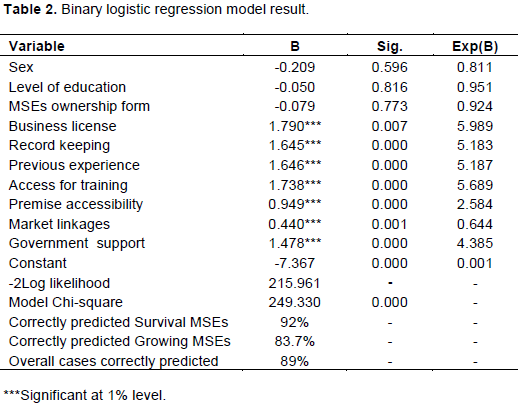 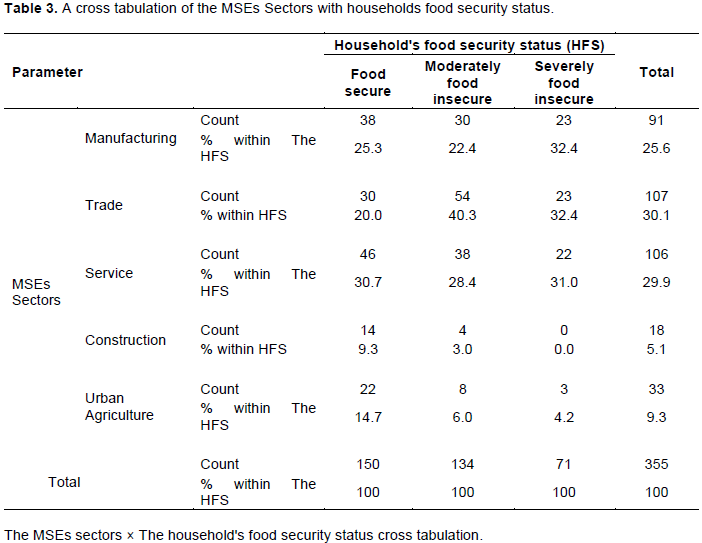 The result indicates that majority of households from the construction sector and the urban agriculture sector have a better level of food security. The majority of households from the trade sector followed by the manufacturing and service sectors were found to be food insecure.
Thus, we can say that for enhancing the households’ food security, the type of the MSE sector matters, the manufacturing and urban agriculture sectors contribute for reducing food insecurity than the trade and service sectors. This could happen due to the better support that the sectors receive from the government. The urban agriculture, construction and manufacturing sectors, are prioritized in the government support services, and receiving a better government may help them to ease food insecurity. The operators of the urban agriculture sector participate in food production, which enhances food availability for their households, so their sector helps them to have a  better  level  of  food  security. The  trade and service sectors receive the lowest support from the government than other sectors and this condition handicapped their growth and the contribution of these MSE sectors in enhancing urban food security. Many food insecure households seen in the manufacturing sector could be due to the low level of growth in the sector than the others although the MSEs in the manufacturing sector receive various supports from the government.
The linkages of MSEs growth and households food security
The MSEs growth status was categorized into survival and growing based on the change in employment size as an indicator of enterprises growth. Then the linkages of MSEs growth with households food security were assessed through chi-square test (Table 4).
The survey result indicates that about 150 households were food secure from the whole participants in the survey and 134 households were moderately food insecure but 71 households were severely food insecure. From the whole severely food insecure households, 78.9% of them work in an enterprises whose growth status is survival and the rest 21% operators work at a growing MSEs. From those operators whose household was moderately food insecure (134 households), about 72% of them works in a survival MSE, while 27.6% of them works in  a  growing  MSE.  About  150  households were food secured households and from those households 51.3% of them works in a growing MSEs while the rest 48.7% work in a survival MSEs.

The chi-square test result indicates that there is a significant relationship between the MSEs growth status and the households level of food security at 1% level of significance (c2=26.092, df=2, p=0.000).  In a chi-square test, we reject the null hypothesis if 2-sided significance reported in the last column and in the row corresponding to the Pearson chi-square is less than the significance level selected  (Ajai and Sanjaya, 2009).
We can state the null hypothesis as the operator’s household food security level is not dependent with the MSEs growth status. As it is clearly seen in the table, the p-value (0.000) is less than the commonly accepted level (0.05), so that we can reject the null hypothesis. From this result, we can claim that when the operator’s MSE grows, the operator’s household’s food security status improves.
In the key informant interviews, the researcher found that there is little cooperation among government institutions at Mecha district for facilitating the MSEs growth and enhancing the food security of urban residents. The TVED offices, the food security offices did not cooperated for common targets and acted separately.
Regarding the relationship between food security and the informal economy in South Africa,  Even-zahav (2016)found that the informal food economy plays a key role as a daily/weekly food access and utilization node in South Africa. However, his study covers the whole informal sectors beyond the MSEs.
The statistical result in this study indicates that the MSEs sector could play a key role for alleviating food insecurity. However, this study shows that growing an MSE but not running the MSE reduces food insecurity. Similarly,Fraser et al. (2014)expressed that the MSEs are an integral component of addressing the urban food insecurity because the MSEs are source of employment and urban food consumption.
Related studies on the role of MSEs for food security in Ethiopia indicated that operating in an MSE does not bring a radical improvement in food security status of households. For instance, Siyum (2015)reported that operating in the MSEs, the MSEs can decrease food shortage of the operators.

The study indicated that the determinants for the MSEs growth (at 1% level of significance) are availability of government support, accessibility of working premises for customers, access for training, prior work experience of the operators, and proper record keeping practices at the MSEs. These factors affect enterprises growth positively. Therefore, to promote the MSEs as a means of alleviating urban food security, we need to focus on these variables. In other words, disregarding the impacts of these variables on the growth of MSEs affects the concerned bodies’ efforts to improve the livelihoods of MSEs operators particularly the food security status of urban households.
The study indicated that there is variation among MSEs sectors in enhancing food security. The operators’ households food security status at the manufacturing and urban agriculture MSEs sectors were found better than the food security status of trade and service sectors. Thus, we can conclude that for enhancing the households’ food security, the type of the MSE sector matters. However, the government favored the urban agriculture, manufacturing and construction sectors for providing various support services. The support provisions by the government have its own role for the construction and urban agriculture sector operators to have better food security status than others. Therefore, extending the support service provision for all MSEs sectors could improve the food security status of MSEs operators across various sectors.
The findings show that there is a significant relationship between MSEs growth status and the operator’s households food security at 1% level of significance. From the chi-square statistics result, we can pronounce that as the MSEs growth improves from survival to growth status, the operators’ households food security level improves. An ownership of MSEs is not just a solution for the food insecurity problem. Instead, facilitating the conditions for MSEs growth seems the key solution for the urban food insecurity problem of Ethiopia.

The study indicated that the MSEs growth and food security has a positive relations. Thus, integrating the urban food security and MSEs development policy is crucial. For the implementation of the urban food insecurity policy needs holistic approaches that integrate various government institutions. Clear procedures that enhance the implementation of the urban food security policy, and a follow up mechanism to correct implementation failures shall be arranged.
The MSEs sector must be supported through strengthening municipal level capacity to address the nexus between urban food insecurity and informal economy and enhancing institutions that provide an enabling environment for MSEs. The focus of the government must be on facilitating the growth of established MSEs than rushing to increase the number of new MSEs.