The effects of organizational culture on turnover intention: The mediating role of job satisfaction, a case of Oromia Forest and Wild Life Enterprise

The purpose of this study was to identifying the effects of organizational culture on turnover intention with mediated role of satisfaction. Data were gathered by closed ended questionnaires distributed to five OFWELs in Oromia. The scales used were the organizational culture index, job satisfaction survey, and the turnover intention questionnaire. The collected data was statistically analyzed by SPSS 20 and AMOS 21. The data were collected using a questionnaire. Three hundred and fifteen (315) questionnaires were distributed and analyzed by using Structural Equation Model (SEM). To validate interdependence relationships between each variable, confirmatory factor analysis by using structural equation modeling (SEM) has been employed. Some of the results were as expected after theory examination, but others were surprisingly contradictive. Bureaucratic culture was significant with direct relationship with turnover intention. Based on the results, it is recommended that supportive culture could be practiced in OFWEs to gain satisfied and committed employees.

Several steps are required to be taken to assess the aforementioned proposed hypothesis. One of these steps is referring to the relevant theory about the concepts organizational culture, job satisfaction and turnover intention.
Organizational culture (OC)
Organizational culture is a complex phenomenon (Dubkevics and Barbars, 2010; Schein, 1984; Peters and Waterman, 1984). Schein (2006) and Daft (2005) reveal that there are three levels of culture: the observable values (artifacts), this is the level that can be observed; the visible organizational structures; and processes. This level is still hard to understand; the espoused values: on this level an image of the organization is created. The strategies, goals and philosophies are formulated through answering certain questions to create that image. Basic underlying assumptions: these are deep beliefs which form the essence of culture. In this research, the following definitions for organizational culture would be applied.
Wallach (1983) stated that “understanding of the beliefs, values, norms and philosophies of how anything is done”. Wallach (1983) also asserted that culture is divided into three main parts, namely: (1) bureaucratic, (2) innovative or (3) supportive cultures. Based on the adopted culture, an employee is more effective in doing the assigned job and realizes his objectives. This is very important in recruiting, managing, motivating, developing and retaining employees.
Job satisfaction
Robbin and Judge (2008), Nasarudin (2001), and Luthans (2006) state that job satisfaction has positive feeling, pleasant emotional feeling or positive emotions come from the work valuation or experience. Worrell (2004) stated that, a satisfied employee is influenced by several factors sorted into three categories: personnel data (age, sex…), intrinsic factors and extrinsic factors. On the other hand, Smith and Kendall (1969) and Locke (1970), consider job satisfaction to be the degree to which an employee, by means of a positive attitude, achieves a positive result in relation to his/her job. Also, Cranny et al. (1992) and Lambert et al. (2002) stated that job satisfaction is an individual directive feeling to reflect whether his/her needs are being met or not. From the negative side, the employees expressed their dissatisfaction through so many ways such as leaving the organization, raising their voice to demand to improve the working conditions, be patient by passively waiting for the conditions to improve and neglecting everything in work. A person with a positive attitude is likely to have more job satisfaction, while a person with negative attitude is likely to have job dissatisfaction towards his or her job.
Major determinants of job satisfaction of mentally challenging work are equitable rewards, supportive working conditions, supportive fellow employees, personality-job fit, company policies and programs. Most researchers showed more interest about job satisfaction for several decades and consider that it can influence work productivity, employee commitment, employee turnover and employee retention (Eslami and Gharakhani, 2012). This depends on how many of his/her feelings are achieved. Job satisfaction is assessed in many levels and can be examined from multiple viewpoints using multiple constructs or scales (Schmidt, 2007). For example, the Job Description Index (JDI), developed by Smith and Kendall (1969) defines five aspects of a job: work, pay, promotion, supervision and coworkers. Spector (1985) identified nine subscales for the Job Satisfaction Survey (JSS): pay, promotion, supervision, fringe benefits, contingent rewards, operating conditions, coworkers, nature of work, and communication. As a result, these facets or subscales may have varied significantly when evaluating overall job satisfaction (Spector, 1985). The researcher used five scales of job satisfaction surveys (JSS).
Turnover intention
Turnover intention is argued to be a strong indicator for actual turnover (Firth et al., 2004). Turnover intention refers to the intention to leave a job voluntarily. Karin and Birgit (2007) defined it as “the intention to voluntarily change companies or to leave the labor market altogether” (p. 711). Price and Mueller (1981) argue that the use turnover intention over actual turnover is better and more practical. They noted that there are many external factors that influence actual turnover behavior. Moore (2002) explained that although actual turnover behavior is still a popular construct among researchers, turnover intention represents a strong surrogate variable. Moreover, in some contexts, turnover intention can be a barometer than actual turnover for management practices. For example, in some economic cycles, such as high unemployment rates, actual turnover is low despite high turnover intention. However, it is acknowledged that some researchers argue against the use of turnover intention as it does not equal actual turnover behavior and unless this intention to quit is acted on, it is just little more than “talk” (Firth et al., 2004). However, Griffith et al. (2000) carried out a meta-analysis on predictors of actual turnover in which turnover intention was a key predictor and this finding is supported by many studies.
The study
Figure 1 shows the conceptual model of the research. 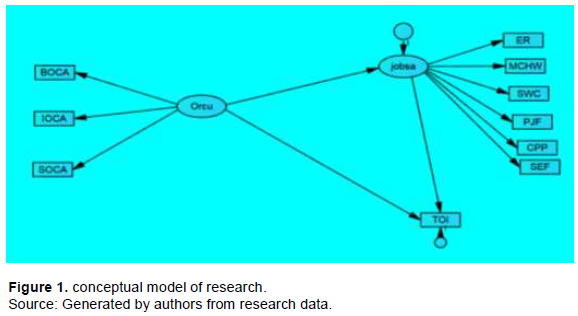 The current research is a descriptive and correlational study that was conducted using the survey method. The statistical population of the research consisted of permanent employees in the selected five branches of OFWE’s. The gathered data was statistically analyzed with SPSS 20, and AMOS 21. The number of employees during the research was 3200 persons, and 315 persons were selected to form the sample by using Carvalho (1984) method. Considering the total number, 73% of participants were male, more than 72% of them had BA and higher degree, nearly 34% of them had 11 to 15 years of work experience, and more than 44% of them were over 36 to 45 years old salary division, 50% of the sample population earns more than 7000 a month. In this research, three questionnaires were used to collect the data. These questionnaires were adjusted based on 5-level Likert scale ranging from 1 to 5. The first questionnaire was to evaluate the organizational culture and included 18 questions and the AFL for these items is 0.86; the composite reliability and Cronbach’s alpha for the scale is 0.83. The second questionnaire was to assess the job satisfaction and involved 20 questions. The AFL for these items is 0.6 and Cronbach’s alpha for the scale is 0.724; and the third questionnaire was to evaluate turnover intention and included 18 questions. The AFL for these items is 0.85, and the composite Cronbach’s alpha for the scale is 0.78. According to Hejase and Hejase (2013), “the generally agreed upon lower limit for Cronbach’s alpha is 0.70, although it may decrease to 0.60 in exploratory research” (p. 570).

Connecting theoretical and experimental knowledge for better understanding of real universe is a feature of approach of structural equation modeling. Such analysis provides possibility of modeling based on latent variables and unobserved variables. To this end, this feature is very appropriate to analyze the theoretical models. In the current study, structural equation modeling was used to investigate the conceptual model and hypotheses of the research and the results are as shown in Figures 2 and 3 whereby information indicates that conceptual model of research had very good fit. 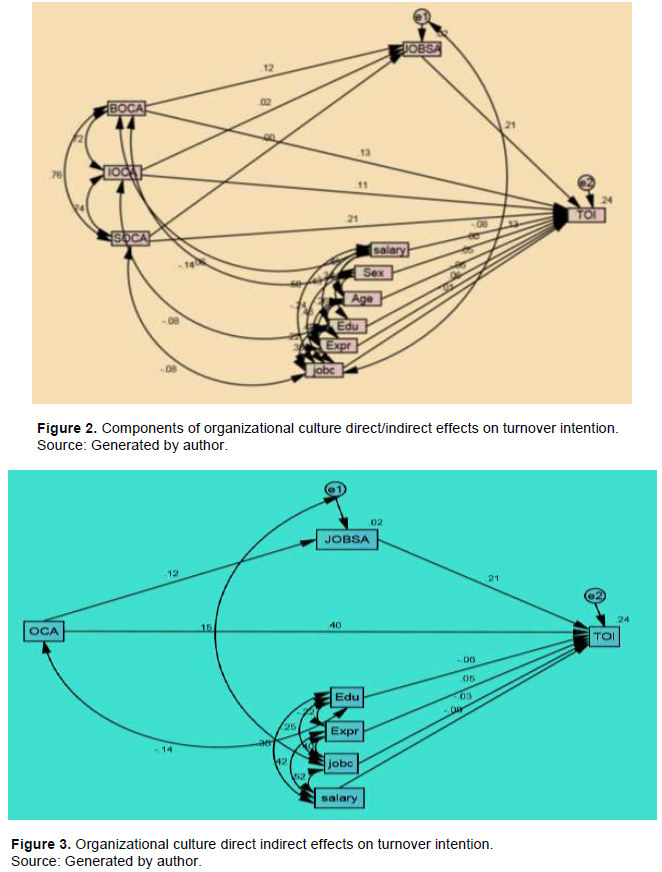 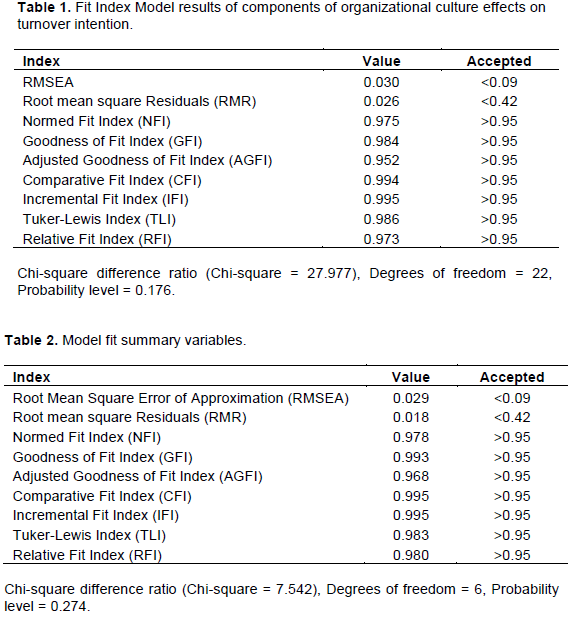 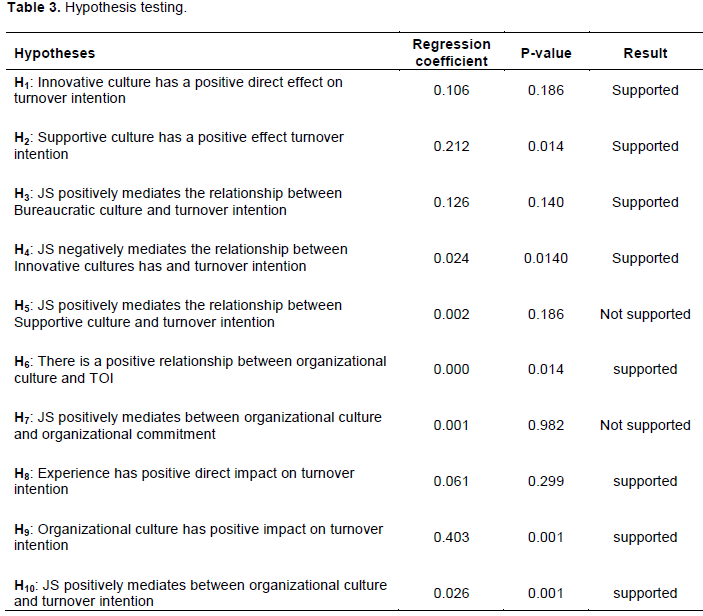 (1) Management of Ormia Forest and Wild Life Enterprise should be considering a great attention to employees’ commitment in order to achieve increased productivity.
This could be achieved by making supportive culture.
(2) Other research could be reviewing on organizational culture and employee commitment in OFWLEs.
(3) Further research also could be viewing influence turnover intention. Leaders should realize that influencing the commitment of employees leads to higher performance and lower turnover rates among other things.

The author expresses gratitude to all those who gave their time and assistance towards the completion of this article. Permission was obtained from all Oromia Forest and Wild Life Enterprise branch concerned and the collection of data is based on the consent of the participants.