L-glutaminase (E.C. 3.2.1.5) is an amidohydrolase that catalyzes the deamination of L-glutamine, producing glutamate and ammonia as reaction products. The enzyme is important in nitrogen metabolism and has a wide distribution in cells of microorganisms, plants and animals (El-Ghonemy, 2015).
L-glutaminase has received tremendous research interest, with focus on characterization and production optimization of the enzyme from different microbial sources. L-glutaminase's promising therapeutic alternative to the treatment of leukaemia and retroviral diseases justifies this research attention (Binod et al., 2017).
L-glutaminase's applications span across the food and medical industries. The L-glutaminase /asparaginase complex is used in the treatment of acute leukaemia and is one of the most important therapeutic enzymes in the medical industry (El-Ghonemy, 2015). In the food industries, L-glutaminase is used as flavour enhancing agent (Sarada, 2013). Several microorganisms have been reported to secrete L-glutaminase into fermentation media. Among the studied organisms, fungi are reported as the most potent producers of the enzyme (Binod et al., 2017). Several species, from the genus of Penicillium (El–Shafei et al., 2014) Saccharomyces (Iyer and Rekha, 2010) and Aspergillus  (Dutt  et  al.,  2014)  have  hence been studied in this regard. However, the industrially important Trichoderma genus has received relatively fewer attentions with regards to L-glutaminase production among the species. In addition, the need to explore low-cost carbon sources as the substrate for biochemical production is highly desirable for a better market competitiveness of the products.
African locust bean tree (Parkia biglobosa) has a wide distribution across the West Africa. A mature tree is capable of producing over 1 metric ton of beans per annum. Despite the abundance, its usage is restricted to the production of a local condiment called “daddawa” (Kayode, 2012). Hence, Elemo et al. (2011) characterized African locust bean is an under-exploited tropical legume.

Isolation and species identification
Soil samples were collected separately from decaying woods, plants and leaves, open vegetative fields and garden bed soil within the Ahmadu Bello University main campus Samaru, Zaria, Kaduna State. Soil samples were sprinkled on separate potato dextrose agar (PDA) plates and incubated at laboratory temperature (28 ± 1°C). Three other PDA plates, not inoculated with soil samples, were exposed to laboratory air throughout the incubation period.
Fungal growth on each plate was after 3 to 7 days examined for morphological characteristics of Trichoderma species. Suspected Trichoderma species were picked from the isolation plates, sub cultured on fresh PDA plates and incubated at laboratory temperature. Pure colonies of suspected Trichoderma were identified to species level on 2% malt extract agar as described by Gams and Bissett (2002).
Qualitative plate screening assay for L–glutaminase production
Isolated Trichoderma species were screened for L-glutaminase production by the plate assay method using Minimal Glutamine Agar (MGA) medium with the following composition (g/L); 0.5 KCl, 0.5 MgSO4, 1.0 KH2PO4, 0.1 FeSO4, 0.1 ZnSO4, 25 NaCl, 2.0 glucose, 20.0 agar, 10.0 L-Glutamine and 2.5% phenol red as an indicator. L-glutamine serves as a carbon and sole nitrogen  source growth in the media. Development of pink zone around individual colony was indicates extracellular L-glutaminase activity. Level of activity base on the pink intensity is reported as low (+), moderate (++), high (+++) and very high intensity (++++) as described by El-Shafei et al. (2012).
Maintenance of fungi and conidia harvesting
The selected Trichoderma specie was maintained on malt extract agar and periodically sub cultured. Prior to conidia harvesting, the culture was grown in the dark and under light at 28±1°C for 3 and 6 days, respectively. Conidia suspension from 9 days old culture was prepared as described by Ahmed and El-Katatny (2007). The conidia concentration was determined using hemocytometer and diluted to 8 × 105 conidia/ml.
Screening of fermentation condition for L–glutaminase production
Eleven physicochemical parameters potentially affecting L-glutaminase yield were screened for effect at two levels; a high (+1) and a low (-1) level settings using Plackett–Burman Design as shown in Table 1. The negligible levels of zinc and iron in African locust bean (Ouoba et al., 2003) justified their inclusion in the design, while other physiochemical parameters were selected on the basis of their potential effect on L-glutaminase production in some previously published studies (El–Sayed, 2009; Iyer and Rekha, 2010; El–Shafei et al., 2012). 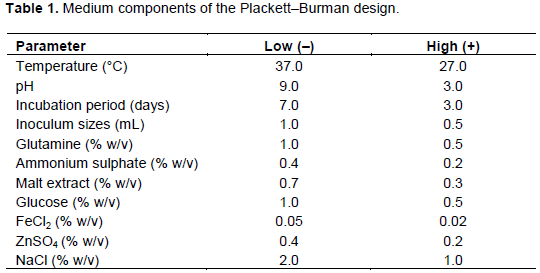 Optimization using response surface methodology
Response Surface Methodology (RSM), using Central Composite Design (CCD) was used to optimize crucial parameters selected from the screening experiment and to build a polynomial model that relates factors and response. JMP Statistical Discovery (2013) v. 11.0.0 was used to generate experimental run matrix based on 3-level settings of a high (+1), medium (0) and a low (–1) levels of individual parameters. The relationship between dependent and independent variables was related by the following second-order polynomial equation:
Y = β0+ β1A + β2B + β3C + β4D + β5E + β12AB + β13AC + β14AD + β1AE + β23BC+ β24BD +β25BE + β34 CD + β35CE + β45ED + β11A2 + β22B2 + β33C2 + β44D2 + β55E2
Where Y is the dependent variable (L-glutaminase production); β0 is the intercept in the design ; β1, β2, β3, β4 and β5 are the linear coefficients in the design ; β12, β13, β14, β15, β23, β24, β25, β34, β35 and β45 are the interaction coefficients in the design ; β11, β22, β33, β44 and β55 are the squared coefficients in the design ; and A, B, C, D, E, AB, AC, AD, AE, BC, BD, BE, CD, CE, ED, A2, B2, C2, D2 and E2 are independent variables in the design.
Statistical analysis of the model was performed to evaluate the analysis of variance (ANOVA). The analysis included the Fisher’s F–test (overall model significance), its associated probability values, coefficient of determination R2 which measures the goodness of fit of regression model. The fitted polynomial equation was then expressed in the form of 2D contour plots in order to illustrate the relationship between the factors and responses.
African locust bean seeds preparation and fermentation
An African locust bean was sourced from Zaria main markets, Sabon Gari Local Government, Kaduna State. They were identified and validated as Parkia biglobosa in the family of Fabaceae at the herbarium unit of the Department of Biological Sciences, Ahmadu Bello University, Zaria, and a voucher with number 7064 was issued. The seeds were prepared for fermentation by means of steaming for four and a half hours to soften the hard testa protecting the cotyledon. The steamed seeds were dehulled to expose the cotyledon by applying friction between the beans and a rough surface as described by Sadiku (2010).
Solid state fermentation (SSF) was carried out on the prepared cotyledon in a 150 ml Erlenmeyer flask. For every experiment, thirty grams of cotyledon was mixed with nutrients and pH set at their low and high values based on individual experimental runs and according to the experimental design. The mixture was then autoclaved at 121°C for 30 min, cooled to room temperature and under aseptic conditions, excess fluid was drained out of each flask before each experimental set-up was inoculated with volumes of 8 × 105 conidia/ml of Trichoderma sp. conidia suspension and incubated.
Crude enzyme extraction
Crude L-glutaminase was extracted from the fermented cotyledon through simple contact method, using 0.05 M citrate-phosphate buffer (pH 6.0) according to the method of Kashyap et al. (2002). The fermented beans were thoroughly mixed with 15 ml of the buffer solution using a rotary shaker set at 150 rpm for 30 min. The entire contents of the flask were squeezed through a mesh, the pooled extract was then centrifuged for 10 min at 10,000 rpm (4°C) and the collected supernatant was used  as  the  crude  enzyme  for subsequent assays.
Protein quantification
Protein concentration was estimated with Folin–Ciocalteu reagent using Lowry modified protocol as describe by Hartree (1972) with bovine serum albumin (BSA), as standard protein. Protein concentration was expressed as mg/ml of crude enzyme.
L-glutaminase assay
L-glutaminase was assayed by direct Nesslerization according to the method of Imada et al. (1973). The enzymatic reaction mixture contains 0.5 ml of 1% L-glutamine in 0.5 ml of 0.5 M citrate-phosphate buffer (pH 6.0) and 0.5 ml of the crude enzyme incubated at 37°C for 30 min. Enzymatic reaction was stopped with 0.5 ml of 1.5 M trichloroacetic acid. The reaction mixture was then centrifuged at 3500 rpm for 30 min to remove protein precipitates. The released ammonium was quantified by the addition of 0.5 ml Nessler reagent and absorbance was recorded at 480 nm with a spectrophotometer. Substrate and enzyme blank were used as control. One unit (U) of L-glutaminase is defined as the amount of enzyme that liberates 1 μmol of ammonia under assay conditions.
Experimental model validation
The predicted optimized condition of fermentation for maximal yield of L–glutaminase by T. longibrachiatum according to the polynomial model was experimentally validated by setting parameters at their individual optimized levels.

This study undertook the isolation and identification of Trichoderma species in a preliminary step to identify a high extracellular glutaminase producing genus member. All the collected soil samples failed to yield Trichoderma specie isolates except garden bed soil samples, representing about 16% of the sampled areas. In total, four isolates of Trichoderma species were recovered from the soil sample plates and additional two isolates from the “air sample” plates as shown in Table 2. The poor recovery of Trichoderma from soil samples has previously been noted by other researcher and among other factors, soil nutrient and pH are major determinants of isolation success rate (Mirkhani and Alaei, 2015).
Qualitative plate screening experiment of the six isolates as reported in Table 2 and Figure 1 indicated Trichoderma longibrachiatum as the highest extracellular enzyme producing isolate adjudge from the pink colour intensity around its colony, this was followed in colour intensity by Trichoderma citrinoviride while Trichoderma viride showed the least extracellular L-glutaminase activity as compared to moderate activity exhibited by T. harzianum and T. inhamatum.
Previous  researchers  (El–Shafei  et   al.,   2012)  have likewise used plate screening assay method to select a high L– glutaminase producing organism prior to optimization works, thus demonstrating the efficiency of the method for candidate strain selection for optimization. 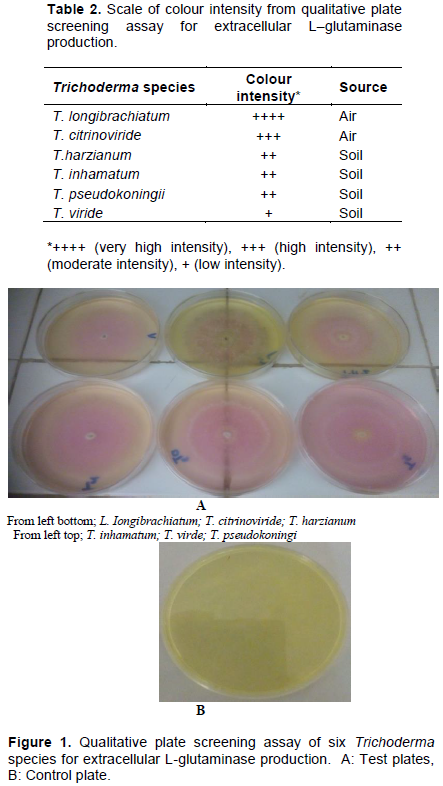