Soumbala is regularly consumed as a condiment in most households in Burkina Faso. The purpose of this study was, therefore, to assess its nutritional and sanitary quality. To achieve this purpose, samples of sombala have been analysed for the determination of pH, water and ash contents, biochemical parameters, mineral elements, and aflatoxin contents. Results showed that Fada N’Gourma soumbala had the highest water content (6.72%) and the highest pH value (7.04), while Pô soumbala had the highest ash content (4.68%). The highest protein content was found in the samples from Ouagadougou (48.03%). For lipids, the highest contents were found in the samples from Fada N'Gourma (48.16%). The samples taken from Gaoua were found to have the highest content of carbohydrates (17.16%). As for the mineral elements, the samples with the highest contents of zinc (9.33 mg/100 g) and selenium (4.83 mg/100 g) were those from Fada N’Gourma. The samples from Ouahigouya had the highest content of iron (6.28 mg/100 g). Aflatoxin B2 was found in the Pô and Fada N’Gourma samples with contents of 0.47 ppb and 0.48 ppb respectively. The results showed that soumbala is a good dietary supplement even if some disparities in the levels of secondary metabolites have been observed between regions. Extension of this study to all the regions of the country will serve as a database for the project to establish the table of nutritional values of foodstuffs currently underway in Burkina Faso.
Key words: Burkina Faso, soumbala, nutitional, quality.

Parkia biglobosa, commonly known as ‘néré’ in Burkina Faso, is a leguminous plant found in most West African countries (Figure 1). Its distribution extends from the Atlantic coast of Senegal to Southern Sudan and Northern Uganda (Lamien and Bamba, 2008). It is planted mainly for its fruits nutritional value and its many virtues (Burlando et al., 2019):
(i) Its fresh, sweet and edible pulp is used, after fermentation, in the production of soft drinks;
(ii) its leaves are used to treat burns and haemorrhoids;
(iii) its bark is used in the production of various remedies against violent colic(s), vomiting (s), diarrhoea(s), sterility, pneumonia, leprosy, tooth decay(s)/ caries, and dermatosis/dermatoses;
(iv) Its ashes are prized in indigo and soap making;
(v) Its seeds, rich in lipids and proteins, are transformed into a very tasty vegetable cheese, called soumbala  for the seasoning of sauces.
Soumbala is a traditionally hand-made product and a strictly hand-made product. Its manufacture varies according to countries and ethnic groups (Figure 2). Each ethnic group has its specific know-how to carry out the fermentation process, which is a very sensitive operation during the production of soumbala (Somda et al., 2014). But in general, soumbala is obtained by a set of technological unit operations consisting of three essential steps, including the elimination of undesirable elements by sifting and washing, cooking and fermentation (Somda et al., 2014).
Fermentation   is   one  of  the  oldest methods  of  food preservation ; in the case of the « néré » seeds, it results in a modification of the physical, chemical and nutritional characteristics of the seeds leading to interesting nutritional properties (Akanda et al., 2018). Bacillus and Staphylococcus strains are commonly involved in the fermentation of soumbala (Somda et al., 2014). The initial fermentation of the « néré » seeds, characterized by the excretion of exopolysaccharides and lipopeptides, is carried out by the genus Bacillus (Savadogo et al., 2011). The strains of Staphylococcus are responsible for the genesis of specific flavours (Somda et al., 2014). These bacteria, using enzymes, hydrolyze the proteins into amino acids and ammonia during fermentation, thus increasing the pH. Soumbala is also characterized by a strong ammonia smell resulting from alkaline fermentation, a cheese taste due to glutamic acid, and a dark brown colour. Soumbala is a good source of nutrients because of its content in amino acids, lipids acids, and B-group vitamins (Ouoba, 2017; Yagoub et al. 2004). 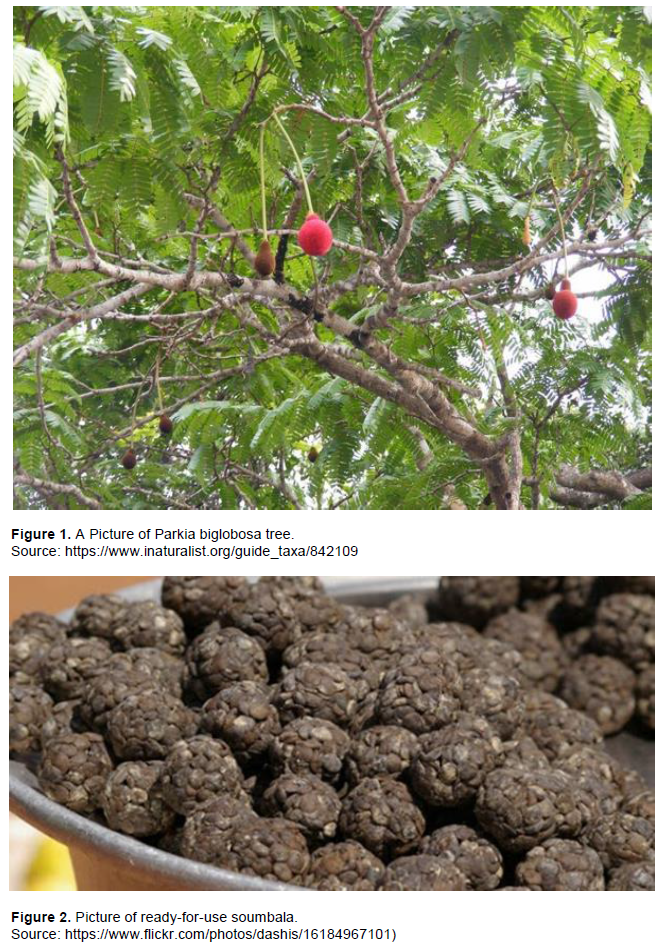 It has previously been established that the final microbiological   quality     and     nutritional     quality    of  substances spontaneously derived from fermented food products are influenced by the quality of the raw material (Somda et al., 2011), the production process (Sadiku, 2010) and the hygiene of personnel practising the art of fermentation (Ouoba, 2017; Glover et al., 2018). In Burkina Faso, soumbala is regularly consumed as a condiment for sauces in most households and restaurants (Dabiré et al., 2020). It is, therefore, important to monitor the sanitary quality of this food seasoning on the one hand and to assess its nutritional value on the other. This study was therefore initiated to produce scientific data on the nutritional value and health quality of the soumbala produced in Burkina Faso. This study will result in making it possible to establish a point mapping of the biochemical, mineral, and sanitary composition of this Burkinabè product.

Humidity, ash and pH measurement
Table 1 shows the results of the general parameters (humidity rate, ashes content, pH) of the collected soumbala. Humidity rate and pH value were higher in the Fada N'Gourma soumbala. In contrast, the Ouahigouya sample had the lowest ash content. For all these parameters, no significant difference were observed between the 6 regions (F = 0.06; p = 0.85 > 0,05 for humidity content, F = 0.12; p = 0.34 > 0.05 for ash content and F = 0.27; p = 0.63 > 0.05 for pH values).
Biochemical parameters
Protein, lipids, and total carbohydrates contents
The macronutrients in the different samples were presented in Figure 4. The lowest total lipids and carbohydrates contents were observed in the samples of Ouagadougou and Fada N'Gourma respectively. The former had the highest total protein content. However, the results were not statistically different between the regions for all the biochemical parameters (F = 0.02; p = 0.99 > 0.05 for lipids content, F= 0.11; p = 0.98 > 0.05 for carbohydrates content, and F = 0.18; p = 0.96 > 0.05 for proteins content).
Proteinic fractions contents
The results of soluble vegetable proteins contents in the various samples were shown in Table 2. Among the soumbala samples analyzed, only one contained prolamin. Glutellins and globulins contents were strongly represented in Pô soumbala ; albumins in Fada N'Gourma soumbala. But no significant differences were observed between the regions for the 04 proteinic fractions contents (F = 0.02; p = 0.99 > 0.05 for Glutelins content, F = 0.04; p = 0.99 for globulins content, F = 0.05; p = 0.99 > 0.05 for albumins and F = 0.13; p = 0.98 > 0.05 for prolamins).
Iron, zinc and selenium content
These results showed that the Fada N'Gourma sample had higher selenium content. In contrast, the Bobo-Dioulasso sample contained a lower iron and zinc content (Figure 5). In general, no significant differences were notified between regions   as regards mineral elements contents (F = 0.86; p = 0.53 > 0.05 for iron contents, F = 0.79; p = 0.57 > 0.05 for zinc contents, and  F = 0.47;  p =0.97 > 0.05 for selenium contents).
B1, B2, G1, and G2 Aflatoxin levels
Table 3 gives the results of the total aflatoxins composition of the collected samples. The results showed that only the Pô (0.47 ppb) and Fada N'Gourma (0.48 ppb) samples contained aflatoxin B2.

This study examined the nutritional and health values of soumbala from six regions of Burkina Faso to determine the general parameters, biochemical, mineral, and aflatoxin composition of soumbala. These objectives were intended to verify two hypothesis : the sanitary quality of this food condiment and to assess its nutritional value.
In terms of nutritional values in general, soumbala in the different regions was rich in total proteins, total lipids, and minerals. To analyze the quality of soumbala, aflatoxins were measured and the results obtained showed that Pô soumbala and that of Fada N'Gourma were contaminated by this toxin but at levels below the threshold value for spices (5 μg/kg) established by the European Union.
To serve as a reference for the project to establish the nutritional value table for food in Burkina Faso, this study should be extended to all soumbala producing regions of the country. Also, for an intensive use in agricultural activities, it would be necessary to look for pesticide residues in the seeds of Parkia biglobosa intended for the preparation of soumbala.

The authors thank the study participants for their willingness to offer information and provide samples; and are also indebted to the laboratory technologists for their help.