Bambara nut (Vigna subterranea L. Verdc or Voandzeia subterranea) is one of the food legumes. It is an indigenous leguminous African crop that is grown across the continent (Olanipekun et al., 2012). It is commonly found in Nigeria and known locally as; “Okpa” (Igbo), “Epa-roro” (Yoruba) and “Kwaruru” or “Gurjiya” (Hausa). There are seven varieties of Bambara groundnut which is mainly recognized by their seed-colour or design, including black, red, cream/black eye, cream/brown eye, cream/no eye, speckled/flecked/spotted purple and brown (light or dark) (PGBG, 2011). The traditional use of Bambara groundnut seeds in treatment/management of several ailments is remarkable and presents a gap for detailed study on the therapeutic and pharmaceutical value of the crop (Harris et al., 2018). Jideani and Diederick (2014) reported that the medicinal role of Bambara groundnut is mainly based on information obtained from communities in several parts of Africa and the world where this crop is reportedly responsible and useful for treatment of various ailments. For example as a treatment/management for diarrhea, a mixture of Bambara groundnut seeds and water from boiled maize are consumed. To alleviate the nausea associated with pregnancy, pregnant women chew and swallow Bambara groundnut seeds (Olanipekun et al., 2019). Other prophylactic and therapeutic use of Bambara groundnut seeds includes protein deficiency kwashiorkor, veneral diseases, polymenorrhea (roasted BGN seeds are used), internal bruising, and cataracts (mixture of water and crushed BGN seeds are used (Olanipekun et al., 2019).
Glycemic index (GI) is referring to a measure of the glycemic effect of carbohydrate in a particular food, which is compared to an equivalent amount of carbohydrate in a standard amount of glucose (Jenkins et al., 1981). Studies showed that dietary GI, or GL plays a significant role in glycemic control of an individual (Thomas and Elliott, 2009). Carbohydrate foods with low GI has been considered to be advantageous for its sustained blood glucose levels and metabolic control as reported by Eleazu (2016) where glycemic  index  of  less  than  55  is  considered  low,  56-69 is considered medium and greater than 70 is high. According to Russell et al. (2016), the understanding of the effect of food on glycemic regulation and on the underlying metabolic derangements plays a vital role in the nutritional management of blood glucose levels for the prevention and management of diseases like diabetes mellitus. One of the objective of this study was to ascertain the GI of seed of Bambara groundnut varieties on healthy rats for possible utilization in management of diabetes.

Plant sample
The four varieties of Bambara groundnut (Vigna subterranea L Verdc.) seeds were purchased directly from farmers in Alkaleri LGA of Bauchi State, North-East Nigeria. They were identified by a taxonomist at the Department of Biological Sciences, Abubakar Tafawa Balewa University, Bauchi, Nigeria. They were given a voucher number (Brown-black/ALK/01, Red/ALK/02, Brown/ ALK/03, and Black/ALK04).
Feed formulations
The formulated feed containing seed flour of Bambara groundnut varieties composed seed flour (56%), cray-fish (20%), vegetable oil (5%), rice bran (4%), sucrose (10%), and vitamin/mineral mixture (5%), respectively   while  the  basal  feed  composed  of  the  same ingredients as the experimental feeds except for Bambara groundnut seed flour was replaced with corn-flour (56%) as described by Olubunmi et al. (2017). The Bambara groundnut seed varieties formulated feeds containing seed flour of Bambara groundnut were tagged as, ALK/01, ALK/02, ALK/03 and ALK/04 feed.
Phytochemical screening
Phytochemical tests were carried out by using the standard methods of Harborne (1999), Sofowora (1993), Trease and Evans (1978) and Savithramma et al. (2011).
Analysis of proximate contents of Balanites aegyptiaca kernels
Ten grams of the flour were soaked in 100 ml of pre-boiled distilled water. The solution was shaken vigorously and allowed to stand for 24 h. It was then filtered using Whatman’s No. 1 filter paper and concentrated by freeze-drying to solvent free extract. The moisture, ash, fibre carbohydrate, crude protein and fat contents in the seed extract were determined as described by AOAC standard assay method (AOAC, 1997).
Determination of GI and GL
Glycemic index in seeds of four Bambara groundnut varieties was determined in rats as done by Eggum et al. (1982). Briefly, rats were fasted overnight for 12 h and their fasting blood glucose were measured from their tail vein using On Call-Plus Glucometer. Different rats consumed the test diets (Bambara groundnut seed formulated feeds) containing 2 g of carbohydrate for 15 min, while control rats received glucose (2 g/2 ml) solution. Blood glucose levels were again checked at 30, 60, 90 and 120 min. GI was determined by calculating incremental area under 2 h of blood glucose response or curve (IAUC) for each diet and divided with the IAUC for glucose solution (standard) times 100 as reported by Jenkins et al. (1981). GL was calculated from GI value time’s for available carbohydrate in diet divided by 100 (Wolever et al., 2003).

The phytochemical contents of 4 varieties of Bambara groundnut (Brown-black, Red, Brown and black) are shown in Table 1, saponins, tannins, steroids, cardiac glycosides, alkaloids and flavonoids were detected in all the varieties while anthraquinones were not detected in all the 4 varieties.
Proximate composition of different varieties of Bambara groundnut is shown in Figure 1. The results showed all the seed varieties are rich in carbohydrate and protein contents but low in crude fat, moisture and ash. The red and black seeds are highest in carbohydrate content whereas, brown-black and brown seeds are highest in protein content. All the seeds varieties showed to contain low crude fat, moisture and ash where red and brown seeds contained the lowest crude fat, brown-black and brown seeds are lowest in moisture and, red and black seeds lowest in ash content. The low ash content indicates their low mineral contents, while low moisture content shows their ability to be stored for a long period of time under ambient conditions. 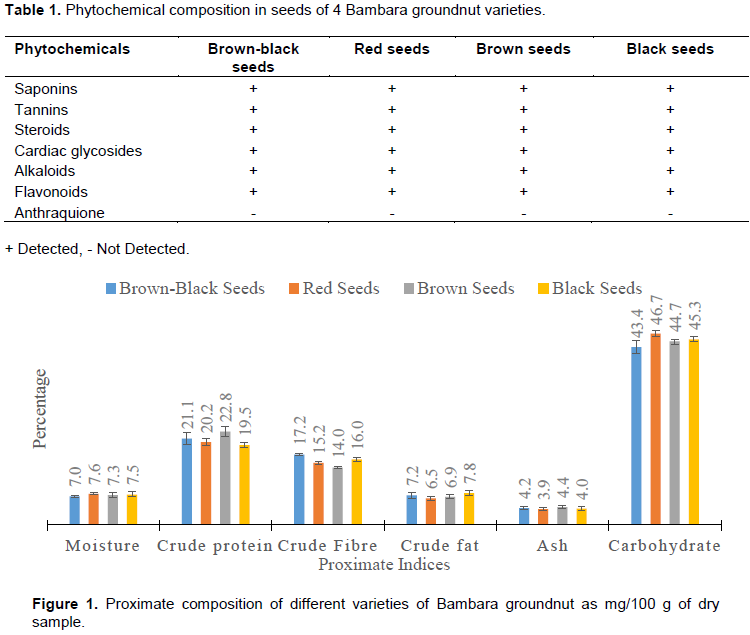 Plant parts produce different chemical compounds or phytochemicals which have been used in a wide range of commercial, medicinal and industrial applications. The obtained results obtained from the preliminary qualitative phytochemical screening of different Bambara groundnut varieties showed that the seeds of all varieties had almost all the phytochemicals screened. The findings are similar to research of Alhassan et al. (2018) which showed most of phytochemicals existing in Balanites aegyptiaca kernels screened. Secondary plant metabolites in plants known as  phytochemicals  are known to be important for both plants and animals but could also be harmful or show some adverse effects on animals  especially  when  consumed  in  large  quantities hence called anti-nutrients. Antinutritional factors are known to affect the availability of nutrients required by the body and interfere with metabolic process so that growth and development of the body is negatively influenced. These anti-nutritional factors can be reduced easily to tolerable limits by proper processing techniques such as soaking, cooking and frying (Mohammed et al., 2019).
Proximate composition of different varieties of Bambara groundnut showed high percent of carbohydrates in all the varieties with red seeds Bambara groundnuts having the highest percent in carbohydrates (46.65%), but low percent of ash (3.85%). The proximate composition of the different varieties of Bambara groundnuts recorded in this study are in-line with the findings of Abdulrahaman et al. (2012) and also similar to what was obtain by Alhassan et al. (2015) on Bambara groundnut grown in Madobi LGA of Kano State-Nigeria, which showed high percent of carbohydrate and low percent of ash.
Furthermore, in this study, it is firstly reported that the GI values differed among Bambara groundnut varieties. The study showed that dietary GI, or GL played a significant role in glycemic control of an individual (Thomas and Elliott, 2009). Where carbohydrate foods with low GI are considered to be advantageous to sustained blood glucose levels and metabolic control. In the present study, GI of different varieties of Bambara groundnut was investigated on healthy rats where different GI values were recorded. Previous research showed that GI of food was in?uenced by the type and amount of dietary ?ber content (Russell et al., 2016). Different GI of the Bambara groundnut varieties recorded in this study could be as a result of their different fiber content as reported by Russell et al. (2016) as well as differences in their physical and chemical characteristic as observed by Foster-Powell et al. (2002).
Literature survey reveals that GI of less than 55 is considered low, 56-69 is considered medium and greater than 70 is high as reported by Kaviani et al. (2020). According to the category the GI of most of the Bambara groundnut varieties falls within the category considered as high with values between 71.4 and 75.6 where only one which is identified as black seed variety of Bambara groundnut has value (66.4) that is considered as medium. The GL of Bambara groundnut varieties determined in the present study provided us with clear picture of how they affect the blood glucose. It was reported that, GL between 1 and 10 is considered low, 11-19 is moderate and 20 or higher is considered as high. Based on this, the GL of all the Bambara groundnut varieties studied are within the criteria considered low hence, the lesser they elevate blood glucose and insulin responses. It was reported that consumption of a diet with high GL is associated with an increased risk of type 2 diabetes and other related diseases (Liu et al., 2000).

The study for the first time reported the GI and GL of different varieties of Bambara groundnut where black seed  variety   of  Bambara  groundnut  possessed  some good qualities that could be consider for use in the nutritional management of blood glucose likely for diabetic patients.

The authors appreciate the Tertiary Education Trust Fund (TETFUND) from Nigeria for the funding support. The authors are grateful to the Vice-Chancellor and Management Staff of Abubakar Tafawa Balewa University Bauchi, Nigeria.