Speciation of trace metal elements in sediments of Alibori River, North-West of Benin

Alibori River located in northwestern Benin is subject to contamination by trace metal elements (TME: Zn, Cu, Pb, Cd) due to the use of agricultural inputs in its vicinity. This study focuses on the speciation of TME elements in the sediments of this river. The sediments were sampled during the rainy and dry seasons, dried, crushed and then sieved. The sediments were then mineralized and subjected to sequential fractionation. The total extraction and sequential extractions were analyzed using a spectrophotometer UV. The sediments of Alibori River had an acid pH and were contaminated by TME during the dry season. The zinc and copper had an affinity with the different fractions with a high proportion in the fractions F1 and F2 during the rainy season and a high proportion in the F5 fraction during the dry season. The lead and cadmium had an affinity with the F5 fraction during the rainy season, and the F3 and F4 fractions during the dry season. The calculated contamination index, individual contamination factor and risk assessment code (RAC) demonstrated that the river presented a potential risk of water contamination. The aforementioned parameters also showed that the river induced risk of bioavailability ranging from medium to very high for organisms. The TMEs found in the sediments of the Alibori River were linked to the exchangeable and acid-soluble fractions which made them more mobile and bioavailable to organisms.

Rivers are natural moderately important water course, flowing continuously or intermittently following a defined route towards an ocean, sea, lake or another river. The Alibori River is an ecosystem located in the Sudanian
zone between 10° 30 "and 12° North latitude and 1° 32" and 3° 50 'East longitude in North Benin. It extends in the department of Alibori with many tributaries scattered in the municipalities of Kandi, Gogounou, Banikoara, Ségbana, Karimama and Malanville before flowing into the Niger River (Le Barbe et al., 1993; Thierry et al., 2016).
Alibori River’s waters are used by the populations for daily needs (drink, cooking, laundry, dishes) and the processing of agricultural products as adequate local water supply facilities are not available in the region (PEA) (Tachégnon and Ibrahim, 2012; Chitou et al., 2019). Intensive agriculture is also developed around the river and is dominated by cash and food crops such as cotton, and corn (Agagbé, 2008; Thierry et al., 2016; Tachégnon and Ibrahim, 2012). It is characterized by an intensive use of agricultural inputs (chemical fertilizers) and phytosanitary products.
One of the consequences of the use of these products (chemical fertilizers and phytosanitary products) is the contamination of waterways by various pollutants such as pesticides and trace metal elements (TME). These TMEs can lead to morphological abnormalities and neurophysiological disorders, and affect enzymatic and hormonal activities in living organisms (Chitou et al., 2019; Wang et al., 2017).
There is a dearth of information on the effects of human activities on the Alibori River (Thierry et al., 2016; Chitou et al., 2019). Our previous study showed that sediments of the Alibori River were contaminated by TMEs (Zn, Cu, Pb, Cd) due to the use of agricultural inputs in its surroundings (Chitou et al., 2019). This study also determined the total concentration of TMEs in the river’s sediments.
The total quantification of TMEs available in sediments remains insufficient to predict (or evaluate) their toxicity, reactivity, mobility and bioavailability (Zhou, 2009; Daldoul et al., 2015; Bashar, 2016). These parameters are rather evaluated through the chemical speciation of ETMs. The current study is therefore initiated to assess the toxicity, reactivity, mobility and bioavailability of TME in sediments of the Alibori River. Its objective is to determine the different chemical fractions of Zn, Cu, Pb, and Cd available in the sediments of this river during each season.

Collection of sediment samples
Seven (7) sediment-sampling points were chosen in Alibori River based on the position of the crop fields and various human activities in its vicinity (Figure 1), and the uses of its waters (Table 1). The river’s sediments were sampled during each of the two seasons (rainy and dry) prevailing yearly in the Alibori region.  The sampling of sediments was performed using a Schipeck grab or manually with a gloved hand depending on the water level.
Sediment analysis
The seven (7) sediments were dried to a constant weight using an oven at 105°C, crushed, while preserving the shells, and then sieved at 2 mm. The obtained product was stored at 18°C for analysis.
The pH of the processed sediments was measured as described by standard AFNOR NF X-31-103, 1998. The sediments were then mineralized by adding 20 ml of a mixture of hydrochloric acid (HCl) 6 mol.L-1 and nitric acid HNO3 7 molL-1 (3: 1) to 1 g of each sample. The mineralized sediments were brought to the boil on a hot plate for 1 h at 120°C, cooled, then centrifuged, and the resulting supernatant was recovered. The collected supernatant was combined with the appropriate volume of distilled water to obtain a solution of 25 ml, and then analyzed using a spectrophotometer UV to determine the total content of TME.
Sequential extractions of TME
The speciation of TME was carried out according to the sequential method of Tessier et al. (1979) modified for 1 g of sediment. The sediments were thus subjected to fractionation according to the sequential extraction as described in Table 2. The extracted fractions were then analyzed using a spectrophotometer UV.
Given the spatial distribution of the seven (7) sites, and the contamination index CI of these sites, only the sediments from the sites 2, 3, 5 and 6 underwent fractionation (speciation). 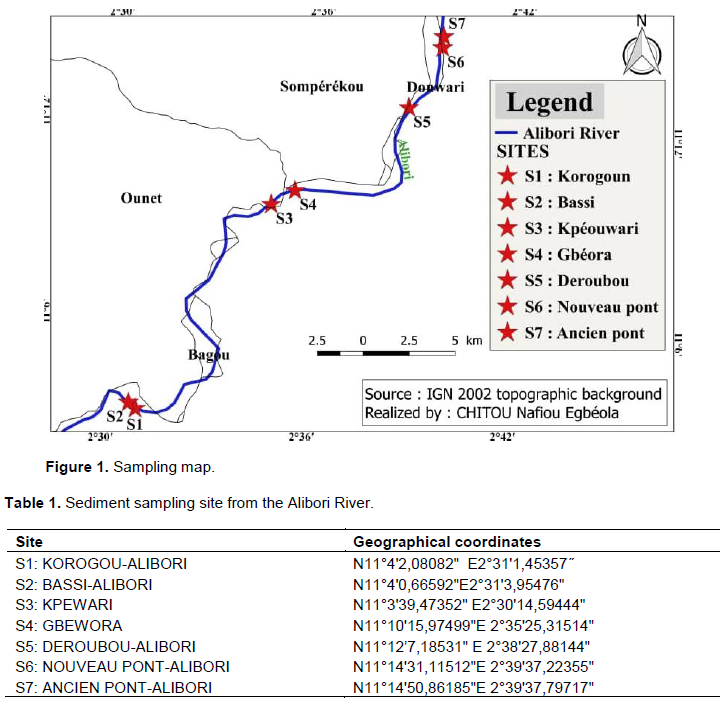 Procedures
Data processing
The levels of variations of the physicochemical parameters and the concentrations of copper, zinc, cadmium and lead in the sediments, as well as extractions’ results, were collapsed into histograms using the Excel software.
The Risk Assessment Code (RAC) and the Individual Contamination Factors (ICF) were estimated and used to assess environmental risks and possible impacts on the river’s benthic organisms.
The heavy metal data were subjected to principal component analysis (PCA) and correlation calculation using X-Lstat software. The correlation coefficient was used to determine the relationship between two variables and to measure the strength of this link. The calculation of the correlation coefficient was used for screening of â€‹â€‹the possible relations between metals with regard to common origin, homogeneous distribution, identical behavior concerning physicochemical processes, and similar reciprocal fractionation.
The contamination index "CI" was estimated following Equation 1 and used to assess the degree of pollution of the sediments in line with Table 3 (Waris et al., 2018).
The concentration of non-residual fractions is the sum of the fractions F1, F2, F3, and F4. Fraction F5 is the residual fraction.
The availability of metals in solution was assessed using the classification of the Risk Assessment Code (RAC) outlined in Table 4 (Huajun et al., 2011; Abdallah, 2012). The RAC is based on the percentage scale to the exchangeable and carbonate fractions of TME in sediments and is the sum of the exchangeable and carbonate (acid-soluble) fractions.

The sediments of the Alibori River were contaminated with metallic trace elements. The results of our analyzes is revealed an accumulation of these metallic trace elements in the sediments with concentrations greater than the standard for Zn, Cu and Cd and high contamination indices.
Therefore, the chemical quality of the sediments constituted a risk for the aquatic resources  of  the  Alibori River.
The study of the speciation of Zn, Cu, Cd and Pb showed that these elements were distributed in all fractions of sampled sediments with a high proportion in the exchangeable fraction and acid-soluble for zinc and copper, particularly during the rainy season. The fractions of Zn and Cu were however quite mobile, suggesting that these elements may be readily available to organisms.
In addition to metals, pesticides also contain active molecules which are persistent toxic pollutants and very dangerous for aquatic species and humans. Thus, it will be relevant to screen the contamination of the Alibori River by active molecules from pesticides under the next stage of our work on the assessment of the impact of the use of agricultural inputs on this river.