A comparative study of faecal sludge management in Malawi and Zambia: Status, challenges and opportunities in pit latrine emptying

This review paper covers the issues of pit latrine emptying national policies and regulations with a focus on Malawi and Zambia. With 2.4 billion people worldwide still lacking improved sanitation facilities, developing countries need to look at policy, regulation and practice for household sanitation service provision with a new lens. What happens “next,” when improved sanitation facilities eventually become full? An emphasis on faecal sludge management has multiplied this important issue in the past few years. The authors compare the pit latrine emptying situation in Malawi and Zambia with a focus on status, challenges and opportunities. To build this comparison, a desk review of national policies, local regulations and peer-reviewed journal papers was conducted. The paper concludes that existing national policies and regulations taking faecal sludge management into account are weak and have wide gaps in the two study countries. For the future, it is recommended, first, that household pit latrine emptying should be seen as an opportunity to address national sanitation gaps and, second, national policies and regulations need to be evaluated and updated.
Key words: Faecal sludge management, pit latrine, policy, private sector, sanitation.

With 2.4 billion people worldwide still lacking improved sanitation facilities (WHO and UNICEF, 2015) developing countries need to look at national policy and practice for household sanitation service provision with a new lens. What happens “next,” when improved sanitation facilities eventually become full? Even for developing countries which have met the Millennium Development Goal (MDG) for sanitation, improved sanitation facilities once full will require pit latrine emptying to maintain MDG status or will over time revert back to the ways of 1990. Pit emptying is a key to sustainability of the MDGs in developing countries. Yet, regionally, faecal sludge management (FSM) is largely absent in policy and legislation in Botswana, Ethiopia, Kenya, Malawi, South Africa, Uganda, Zambia and Zimbabwe (Water Research Commission, 2015).
Full sanitation facilities globally are not the same, and Rose et al. (2015) has shown the dietary intake of food and fluid are the primary links to faecal and urine composition entering sanitation facilities, with faecal wet mass variation between developing versus developed regions. Although, Todman et al. (2015) reported pit latrine fill rate modeling is complex, and may not provide an accurate prediction of individual household pit latrine fill rates. This may make local regulatory planning difficult. Faecal sludge management is both an urban and rural problem in developing countries, but the greatest opportunity for addressing full sanitation facilities lies in urban, and peri-urban, areas where pit latrines still dominate household sanitation facilities (Strande et al., 2014). Additionally, Still and Foxon (2012a, b, c) outlined that most pit latrine emptying services target improved (with a cement slab), lined, pit latrines due to technology limitations.
The objective of this paper was to present a management review related to pit latrine emptying in two Southeastern African countries, Malawi and Zambia (Figure 1). Although geographically close, key environ-mental and policy characteristics in some cases differ. Malawi is a country which has shown moderate progress towards meeting the MDG target, whereas Zambia is classified as having had limited or no progress (WHO and UNICEF, 2015). Faecal sludge requires collection, transport, treatment and use/disposal (Strande et al., 2014). As the FSM sector grows, a policy and regulation review and comparison for each of these steps provides a focus to sector efforts in developing appropriate and scalable legal and regulatory approaches, norms and standards. This paper presents problems and opportunities, a review of how FSM business is conducted, and finally, policy support and gaps. The results of this review may guide future policy creation for faecal sludge on a regional level. The next section of the paper presents the methods used, followed by analysis of whether pit latrine emptying is a problem or an opportunity, a review of pit latrine emptying business, and details on national policies and regulations.  The paper concludes with outlining key challenges and solutions for policy makers. 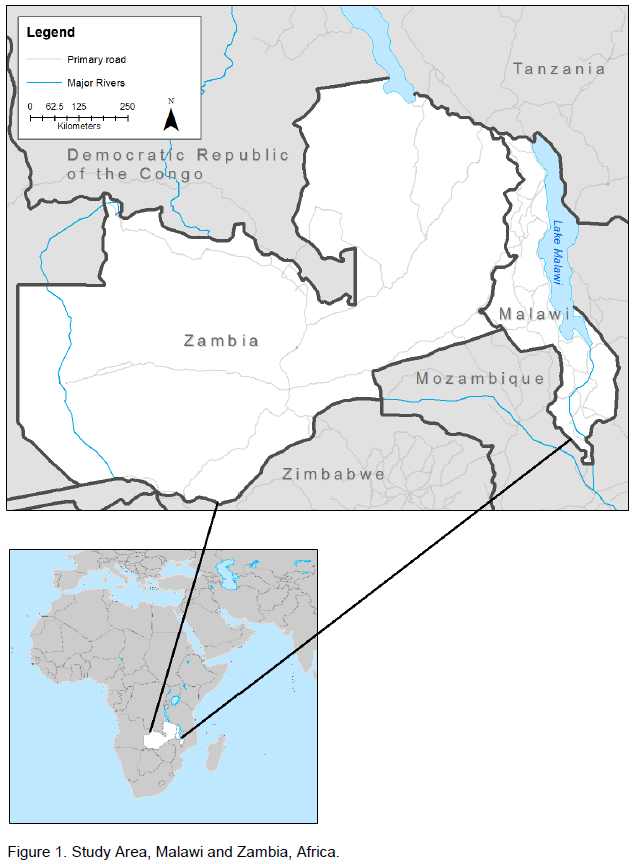 National policies, local regulations and peer-reviewed journal papers were included in this review. The review was focused on sanitation, but with an emphasis on pit latrine emptying. Accepted papers had reference to national policies or local regulations of faecal sludge collection, transport, storage, treatment and reuse. Bibliographies from peer-reviewed journals were also searched for relevant papers. The method specifically targeted drawing recent, strong, evidence to orientate future management within the context of enabling pit latrine emptying.
Is pit latrine emptying a problem or opportunity?
Criteria such as regional location, elevation, temperature, rainfall, soil type, population, urban population distribution, dominate religion and government may play a role in regional FSM. Table 1 provides key charac-teristics of Malawi and Zambia as a background to pit latrine emptying problems or opportunities.
Malawi has seen an increase of the population living in urban areas, moving from 12% in 1990 to 16% in 2015. Urban improved sanitation facilities have also been increasing while open defecation is seen decreasing over this same period of time (WHO and UNICEF, 2015). While 9.4% of the urban population has a flush toilet (Malawi Government, National Statistical Office and ICF Macro, 2011), pit latrines still dominate household sanitation facilities especially in peri-urban areas. Sewer systems are only present in two cities of Malawi, Blantyre and Lilongwe. Although covering a full pit latrine has historically been common practice, now, when a pit latrine is full, households are challenged to dig a new pit due to tight spaces in high density urban settlements. Another problem is that pit latrines fill quicker than anticipated, when in addition to household faecal inputs, a lack of municipal solid waste collection at a household level makes pit latrines to be used as garbage pits. 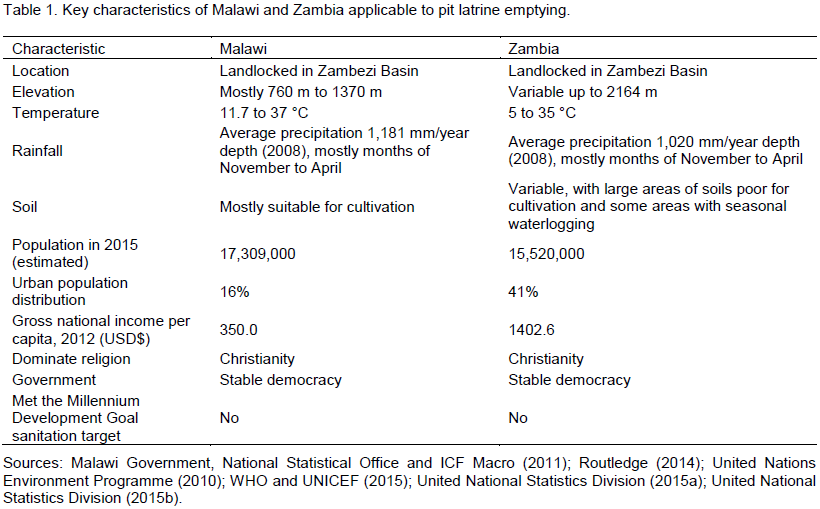 The status of current household urban sanitation in Malawi is also closely tied to politics. Urban migration was discouraged by the first President, H. Kamuzu Banda (1964-1994), during a time where rules supporting sanitation, hygiene, and waste were dually enforced by chiefs and party officials (Cammack, 2012). An interview conducted by Cammack (2012) noted “People feared the fine that a person had to pay for not following orders so people got used to practicing hygiene. It became part of people’s habits and the Malawi Congress Party (MCP) did not have many problems in implementing sanitation rules.” With the second President, Muluzi (1994 to 2004), urban migration spread quickly into vacant lands and nearer to towns, resulting in the need for urban water and sanitation with a larger footprint (Cammack, 2012). These spaces of high population density, and unplanned land use, on the sprawling edge of an urban city spread into Malawi’s peri-urban areas. Similar to Malawi, Zambia has a growing population, although a much higher urban population density than Malawi, reported in 2015 at 41% (Zambia Government, 2012; WHO and UNICEF, 2015). Historically, sanitation and FSM in Zambia has been part of the water sector. But, the 1991 Local Government Act decentralized services, and transferred water supply and sanitation responsibility from the national government to the Ministry of Local Government and Housing. Commercial utilities were formed to manage water and sanitation in their respective areas of operation (World Bank, 2002). The National Water Supply and Sanitation Council (NWASCO), was established by the Water Supply and Sanitation Act of 1997 to be responsible for regulating water and sanitation services offered by commercial utilities. Management of faecal sludge from pit latrines in the context of desludging, transportation and utilization is a new sector in Zambia.
Historically, the norms were that faecal sludge in pit latrines, once full, were covered over and forgotten. A World Bank (2002) report on low income urban settlements found up to 50 households sharing one latrine in some areas. While improvements have been made in the water supply services, it has been seen that sanitation has not kept pace. Emptying of pit latrines in urban Lusaka is further complicated by frequent flooding in peri-urban, unplanned settlements, even in years of normal rainfall (Nchito, 2007).
WHO and UNICEF (2015) data on the progress on sanitation situation indicates, when considering the combination of Malawi and Zambia urban sanitation facilities, there is a large opportunity for pit latrine emptying services (Figure 2). While the use of improved sanitation facilities in urban Zambia is higher than Malawi, as a proportion of the urban population, interestingly Zambia has decreased slightly over the period from 1990 to 2015. As shown in Table 1, the elevation, temperature and rainfall make the environmental conditions for pit latrines mostly ideal in both Malawi and Zambia. The soil conditions in many areas of Malawi are easy to build a new pit latrine, whereas the soil in some areas of Zambia makes burying pit latrines when full difficult and may offer a larger opportunity for pit latrine emptying. Also in both countries, the dominating religion of Christianity leads most pit latrine users to be wipers, who do not add water during pit latrine use. As such, most pit latrines are considered dry, operating without flush water. Pit latrine emptying needs to focus on removal of a dense solid material, with low water content. The gross national income per capita is higher in Zambia than in Malawi, which is an indication of ability to pay for pit latrine emptying services and may indicate an easier market for sanitation business in Zambia than Malawi. 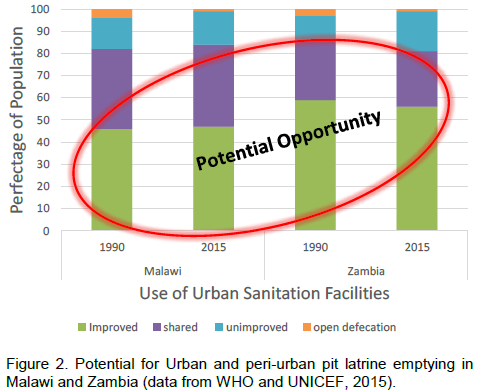 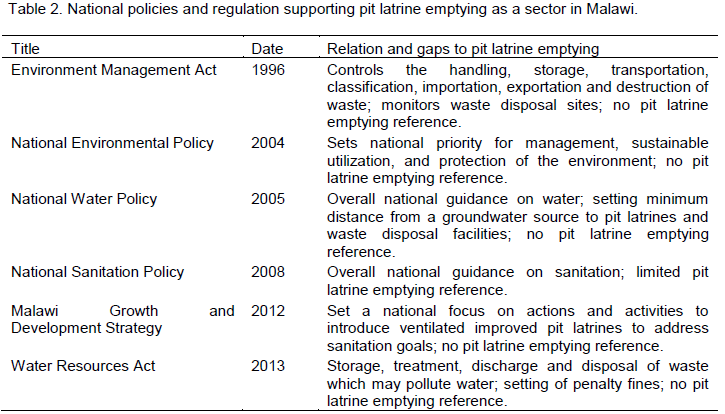 Pit latrine emptying businesses which are registered currently fall under the general National Construction Industry Council of Malawi, there are no special business licensing requirements. This is an especially large gap to group this service sector together and does not acknowledge the public health and safety standards needed for pit latrine emptying business.
As an example, in the Malawi city of Mzuzu, Assembly By-laws (Mzuzu City Assembly, 2002) cover the day to day oversight of sanitation services. Yet, the Refuse and Rubble Section is not followed, or enforced, and does not include any reference to pit latrine emptying.
Zambia presents a similar situation with very few policies directly referring to pit latrine emptying management. Most policies and legislation applies to FSM when it is considered under a general reference of sanitation. There are no specific policies and legislature dealing with FSM in urban areas. The key national Zambian water, sanitation and hygiene promotion polices are shown in Table 3. Pertinently, within the Water Supply and Sanitation Act, services are decentralized to water utilities. However, until recently, the water utilities were only operating in urban areas, and peri-urban areas had no institution mandated to take charge of water and sanitation service delivery. 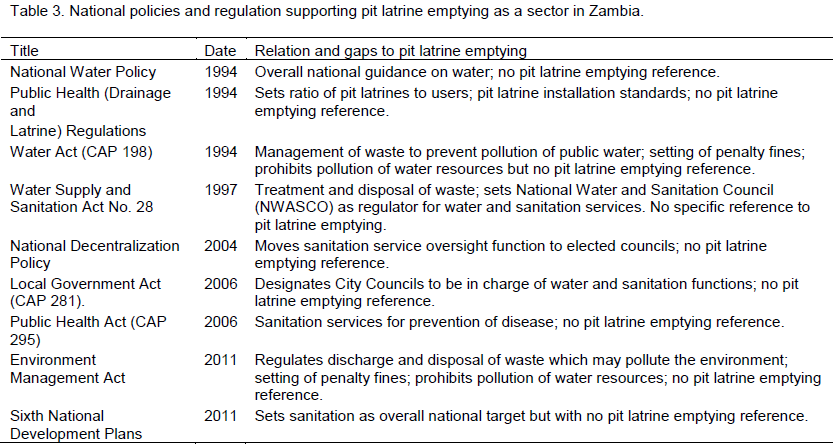 The authors gratefully acknowledge the financial support provided under separate grants awarded to Mzuzu University, University of Zambia and University of Malawi, under the Sanitation Research Fund for Africa (SRFA) Project, a joint fund established by the Water Research Commission and the Bill & Melinda Gates Foundation.