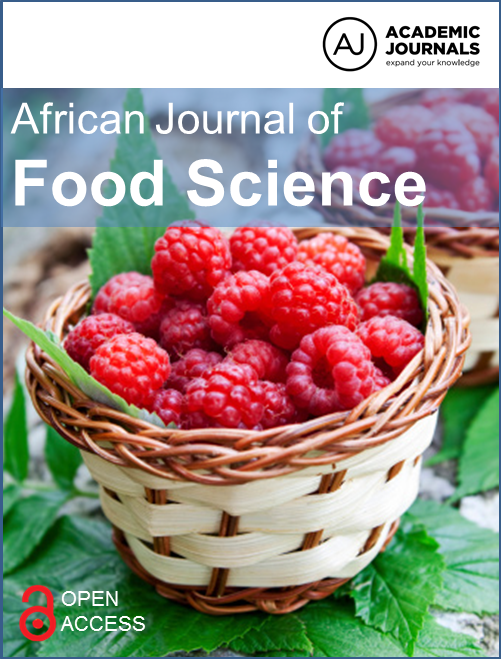 Bread is universally accepted as a very convenient form of food that is important to all populations, and is still one of the most consumed and acceptable staple food products in all parts of the world (Ijah et al., 2014) and can be used as a carrier for healthy ingredients (Akhtar et al., 2005). It is  also  an  excellent  source  of  complex
carbohydrates which provides energy from starch and nutrients, such as protein and fiber (Eduardo et al., 2013). Wheat flour is one of the major conventional ingredients in bread making, due to its gluten fraction (Anwar et al., 2017).
The gluten-forming proteins (gliadin and glutenin), when combined with water, are hydrated, creating connection bridges between them and by mixing, form the viscoelastic structure of the gluten network (Ortolan and Steel, 2017), which is responsible for the retention of gases formed in the mass fermentation process and in the release of water vapor during the cooking process (Araújo et al., 2010). In addition to wheat, water, yeast, sugar, milk, improver, fat and salt are other ingredients commonly used in baking process (Mitiku et al., 2018).
Nowadays, globalization in food service industry has led to producers and retailers responding to consumer’s demands by modifying healthy and attractive varieties. Bakeries are also challenged to produce either gluten-free bread or bread with reduced gluten content which have quality features comparable to wheat flour bread. Consequently, replacement of wheat flour in order to obtain healthier and less expensive products has been the subject of numerous researches, which is mainly focusing of sweet potato-wheat flour blends (Adeleke and Odedeji, 2010; Ijah et al., 2014; Nunes et al., 2016; Pérez et al., 2017; Yuliana et al., 2018; Mitiku et al., 2018; Nogueira et al., 2018). For the low income countries, like Mozambique, where sweet potato is largely produced in the whole country, its utilization for flour processing to bread making would be welcomed to reduce costs of importation of wheat flour and by offering nutritious bread products to consumers. However, sweet potatoes processed into flour has been reported with some drawback properties such as slightly dark color and low loaf volume when applied on bread products (Trejo-González et al., 2014; Amal, 2015; Yuliana et al., 2018). These noted technological difficulties that partial replacement of wheat flour with other types of flour presents its attributed to its proteins which do not have the capacity to form that network of gluten to retain the gas produced during fermentation (Gallagher et al., 2004; Eduardo et al., 2013). Therefore, more attention has been proposed in the use of hydrocolloids due to their accessibility, safety and also low cost (GaÅ‚kowska et al., 2013; Shahzad et al., 2019).
Okra (Hibiscus esculentus), found inside of dika nut (Irvingia gabonensis) and khan (Belschmiedia sp.), is the popular hydrocolloids African food with emulsion po-tential. Kinetic studies have indicated that the mechanism involved formation of thick and strong interfacial gum films around the oil globules, in addition to a high water absorption capacity (Ndjouenkeu et al., 1997). Okra is the most abundant and economically important vegetable in Mozambique. It offers a consistent hydrocolloid when cooked; and it is usually added to other foods that need improvement in consistency (Noorlaila et al., 2015). When okra hydrocolloid is extracted in water, it results in a highly viscose solution with slimy texture and has proven to strengthen soft wheat dough (Ramadas and Tharanathan, 1987). Therefore, a proper inclusion of okra hydrocolloids can alter the enthalpy of starch gelatinization, reducing the firmness of the dough and delaying the retrogradation which reduces syneresis (Li et al., 2017; Shahzad et al., 2019). Acquistucci and Francisci (2002) also studied the effects of the addition of okra (H. esculentus L.) pods to wheat flour devoted to bread preparation and showed effectiveness of this crop as food additive to produce bread of adequate technological and sensory characteristics.
Considering that sweet potato flour gets a low quality pastries due to the baking process and taking into account the fact that the okra mucilage can have a good stabilizing effect of sweet potato-wheat flour composite, the present study was carried out to evaluate the effects of partial replacement of wheat flour with flour from sweet potato (Ipomoea potatoes) flour; and, the respective supplementation with okra hydrocolloid in the preparation of wheat bread production.

The study revealed that replacing wheat flour with sweet potato flour in 10, 20 and 30% is a feasible alternative for bread production without remarkably changing its physical-chemical and sensory characteristics. However, replacement of 30% of wheat flour for an equal proportion of sweet potato flour and 1.5% okra hydrocolloid became the dough darker, and resulted in low acceptability of the bread samples. All findings indicated that replacement of wheat flour with sweet potato flour up to 30% in the production of bread can be an interesting alternative to produce low cost bread without significant changes in its sensory and technological properties.

Armando Massingue thanks the Austrian Partnership Programme in Higher Education & Research for Development in Africa (APPEAR) project number 176 for granting this research which was generated by undergraduate's work by the first author.