This paper deals with the new administration system under Gojjame rules and the Oromo people resistance to them in Abbay Choman, South of Abbay River from 1850 to 1882. The year 1850’s was a turning point in the history of the Oromo of Abbay Choman Oromo because it was a period when the system was transformed into a semi- monarchical administration. On the other hand, the year 1882 was the period when Horro Guduru in general and Abbay Choman in particular came under Ethiopian feudal rulers. This paper focused on reconstructing the political structure of Oromo of Abbay Choman from 1850 to 1882. The main objective of this paper is to show the indigenous administration system of the Oromo area before Gojjame invasion and emergence of new system of government with new chiefs, at the expense of the indigenous system under Gojjame rule. The paper also shows the local resistance against Gojjame army from 1870 to 1882. The paper comes up with the idea that the Gojjame invasion of the area resulted to the whole destruction of Oromo people indigenous practice. Since historical methodology requires extensive collection, closer investigation and analysis of the available primary and secondary sources, the paper seriously took those into account in treating the new Gojjame rule and the Oromo resistance in Abbay Choman, North East Wallaga, Oromiya, Ethiopia from 1850 to 1882. The study used and explored both primary and secondary sources. For the paper, both published and unpublished works of scholars of diverse background had been identified.

The Oromo are among the largest groups in Ethiopia (Feyera, 1999). Linguistically, they are categorized under East lowland Cushitic sub-family. The linguistic evidence studied by Bender shows that present Cushitic peoples of Ethiopia are direct descendants of ancient Cushites of North East Africa, and that they have moved  or  migrated from North towards the South and South Eastern regions. This movement and distribution eventually resulted in the formation of four branches of Cushitic speakers. Afaan Oromo is classified under the eastern Cushitic languages (Herbert, 1966; Tesema, 2006; Bender 1976).
The original  homeland  of  Oromo  people  from  where  they started their expansion was an issue that was not agreed among scholars. There are different views and ideas about the origin of the Oromo people (Alemayehu et al.,2006). However, the idea which states that Oromo came from outside was criticized and opposed by different scholars. Some scholars place the original homelands of the Oromo in Ethiopia (Mohamed, 2012; Christopher, 2012; Tesema 2006).
The Oromo began to move massively into the Christian, Muslim and other neighboring areas of the region since the first half of 16th century (Tesema, 1986; Dereje, 2000). Odaa Nabee served as a permanent base for Machaaa and Tuulama Orormo. Odaa Nabee, which served as a permanent base during the Harmufa Gadaa (1562 to 1570) was an important land mark in the expansion of Tuulama – Machaaa Oromo branch. It was after Odaa Nabee that the Tulamaa and Machaa separated and became independent groups (Mohamed, 1990; Alemayehu et al., 2006; Yilma, 1959).
The history of the Oromo of Horro Guduru has begun with their separation from the larger Machaa Oromo and departure from Tutee Bisil (Cherinet, 1988). Their first entry into the Horro Guduru was spearheaded by cavalry and infantry (lafoo) units armed with spears. The Machaa Oromo who left Tutee Bisil settled in Horro Guduru and established their own new Gadaa centre at a central area of Horro Guduru at Odaa Bulluq (Dereje, 2000).
Traditions collected by Oljira (1994) claim that the present settlers of Horro Guduru were the original nine clans, all of them were the descendants of Jawwı, namely, Horro, Guduru, Jimma, Amuru, Kiramu, Jidda, Limmu, Ebantu and Challiya (Oljira, 1994). Another tradition states that, the present settlers of Horro Guduru belong to two ancestors. One of them was Obo, whose descendants were Guduru, Challiya, Sibu Leqa, Harru and Ilu and the other was Jaawwii whose descendants were Horro, Jimma, Amuru, Kiramu, Jidda, Limmu and Ebantu (Oljira, 1994; Desalegn, 2010).
There were three traditions which tried to establish the methods in the distribution of land to various clans who settled in Horro Guduru. The first one was fire-setting tradition, second was Ox slaughtering and the 3rd was related to the korma (Bull). This tradition indicates that each sons of Jaawwii followed their Bull (Desalegn, 2010). Abbay Choman district is one from Horo Guduru zone which was occupied by the Machaa Oromo during their expansion.  Abbay Choman district was inhabited by the Oromo group known as Akaakoo. Akaakoo had three children. These were Gobayya, Ganjii and Daragoti. From them Gobayya was the eldest son. Daragootii had three children: Hamuma, Halu and Buyya. Gobaya had five children’s: Ebilcho, Minto, Warqe, Kubi and Qiltu. Ganjii had twelve children: Qetala, Daragoti, Qarree, Maaruu, Buko, Abdaaroo, Kushe, Diino, Botii, Ganjii Haroo, Abolee and Habu.
The activities and life of each and every member of the Oromo are guided by Gadaa. It is the laws of the society, a  system  by   which   Oromo   administer,   defend  their territory, rights, maintain and guard their economy, and through which all their aspiration are fulfilled. Under it the power to administer the affairs of the nation and power to make laws belong to the people. This Gadaa system continued until the 1850’s when the system was transformed into semi- monarchical administration. However, it was completely declined in 1870’s with the arrival of the Gojjame rulers to the area with monarchical administration system (Gadaa, 1988; Giday, 2000; Alesandro, 1975).
Although the aforementioned researchers conducted a research on certain areas of Wallaga and Horro Guduru. No comprehensive history has been conducted on the Oromo of Abbay Choman in particular in their relation with Gojjame people. Therefore, this paper attempted to fill the gap by answering the following questions:
(1) What was the nature of administration in the Oromo of the area before the coming of the new Gojjame?
(2) What was the nature of administration in the Oromo of the area after the coming of Gojjame rule
(3) What was the role of local people against Gojjame rule?

Description of the study area
Abbay Choman district shared boundaries with Hababo Guduru and Jardega Jarte district in the North, Horro district in the west and Hababo Guduru and Guduru in the east. The major rivers such as Nashe, Amarti and Fincha’a meet in the northern margin of the district. The major economic activity of the Abbay Choman is mixed farming system which is the cultivation of crops and rearing of animals since the time of their initial settlement. Besides trade, production of honey, wood working and iron works are also practiced in small scale. The total annual rainfall the district receives usually ranges between 1500 to 1900 mm. All parts of the district receives almost equal rain fall. The altitude of the district ranges between 244 ms and 1350 ms above sea level (Gemechu, 2009) (Figure 1). Since historical methodology requires extensive collection, closer investigation, and analysis of the available primary and secondary sources, the paper seriously took those into account in treating the political survey of the district. The study used and explored both primary and secondary sources. For the paper, both published and unpublished works of scholars of diverse background had been identified and utilized. 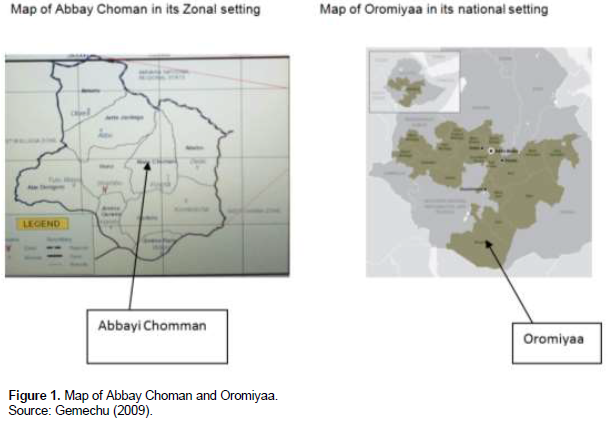 Abbay Choman Oromo peoples are one of the Machaaa Oromo branch found in Horro Guduru Wallagga zone, Oromiya regional state, Ethiopia. A history of the Oromo of Horro Guduru has began with their separation from the larger Machaaa Oromo and departure from Tutee Bisil (Gadaa centre of Machaaa Oromo) before they were separated and made their centre Odaa Bulluq. However, from the mid-19th century onwards, the egalitarian socio-political organization of the Gadaa system was not so much influential as before and instead different political systems evolved among the Oromo clans of the area. Each clan had established a new hierarchical structure and a single person could appoint or dismiss officials. Although power emanated from a single individual which indicates aristocratic type of government, under the Mootii administration, criminals were punished in accordance with the Gadaa system.  Even though the political significance of Gadaa centres in the region began to decline by the local Oromo chiefs themselves, the institution was influential in different aspects until the year 1870’s. In 1850’s, the power of the Abba Bookkuu was taken over by the Mootii (kings) and later by the Gojjame conquerors in 1870’s. The use of Kallacha was diminished. Systematic efforts were made by the Gojjame to destroy the institution. Thus, the Gojjame purposefully camped (settled) near the Gadaa centres seeking the gradual destruction of it, and became successful in destroying indigenous Oromo political system.