The knife of Bursa in Turkish culture: A historical and cultural study

Scientists who document the history of humanity 100 thousand years ago claim that the first knife made was of lighters 25 thousand years ago. The 75,000-year time difference between man and the first knife should be the process of transformation of human beings into homo sapiense. Sapiens have started to transfer their experiences which have the power to design the tools they use, to the new generation beyond logical instincts. Petroglyphs and lettering were not only carrying information but also lightening the tools and preventing them from being forgotten. Human beings have been able to communicate with each other in different geographies in different periods. With this virtue, they have been able to change their way of life by developing and processing the materials. In this process, the Turks, soldiers and those skilled in their time were the first to process iron during civilization, beyond the era of knives, swords, wedges. In Turks, instruments are not only functional but also aesthetic. This article deals with the history and development of knife, which is one of the most frequently used tools of humanity. Turk’s knives, their place in Turkish culture, importance, types and etymological description have been discussed in this study. By comparing with today's knives, the place, historical development, and properties of the historical Bursa knife were determined. 93 Harbi and migratory knives that affected the historical Bursa knife and the law of firearms numbered 6136 in 1953 were examined and their effects on the Bursa knife were evaluated. In this respect, the article was concluded by evaluating the findings.

The knives used in the early periods of humanity were structurally quite different from the knives used today. At that period of time, blade was a structure with cutting edge and handle and a very functional hand tool; it was used for cutting, drilling or tearing processing.  It was also used as a weapon. The use of knives as weapons is prehistoric times. The oldest known knife is made of flint (del Pilar Babot et al., 2013:3). The first metal blade is symmetrical double-edged arrowhead-like daggers made of copper. Similar to present-day knives,  the  first  single-back blade was made in the Bronze Age 4000 years ago (del Pilar Babot at al,, 2013:3) (Figure 1). Researches involving various analytical microscopic and composition techniques have been conducted  to identify the protected uses of these residues, which are defined as knives, over time (Hayward, 2016: 16). Research reveals the fact that knives are tools and weapons  used in hunting, cooking and carpentry in human history (Knifecrimes, 2020). Harari suggests that, there are at least   six   different   human   species,    when  specifying human history to 100000 years ago (Harari, 2017:21). In these species, Homo Neubertals and Homo Sapiens were able to use the tools. The ones described as  humanoid had no human characteristics (Wikipedia E.T. 07.02.2019). Son insan türü olan, the last human type sapiens were social and were able to transfer their knowledge to next generations. This situation helped to preseve the soci-cultural importance of the tols. Harari defines culture as an immense variety of imaginary realities, and as a consequence of developing behavioural patterns; and defines unstoppable changes in cultures as history (Harari, 2017:49). As a consequence, history of knife needs to be defined as a culture too in this changing time. 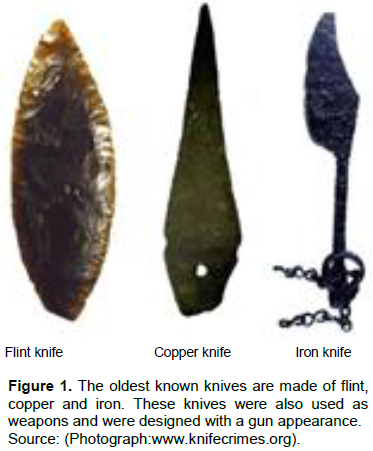 Since his existence on earth, human beings have been engaging in hunting to meet his need for food. To meet his need for shelter he started to make cutting tools such as knives and spears (Birinci and Camci, 2016:495). First cutting tools were made by stone; after that they were made by bone, obsidian, copper iron and bronze (Figure 2). However, the blade appears to have iron structure (Hayward, 2016:16). Because iron and steel can be poured, they can be brought to the desired form by mold. The form can be beaten by reheating again and again, and made without failures. This new method not only made the knife to be a useful tool, but also an effective hunting and combat weapon. Petroglyphs explains that it has a built-in order, some routine work, show of power, status determination or continuity  symbol.  Hunting  is, above all, a sign of power. Hunting symbolizes power. It represents how to get  power and how to stay in power (AlyÄ±lmaz, 2016:226). In the knife-making technique developed with humanity, more solid material has been used and it has become aesthetic besides its functionality.