In 1965, Zadeh's fuzzy set concept was the basis of mathematical testing of the fuzzy concept that exists in our real world and the formation of new branches in mathematics. The fuzzy set concept corresponding to unexplained physical situations gives useful applications on many topics such as statistics, data processing and linguistics. A lot of research has been done on this subject since 1965. It has been investigated whether or not the concepts and the theorems in the classical theory of mathematics can be applied to the fuzzy theory. After publishing the fuzzy clusters of Zadeh in 1965 and defining Chang's fuzzy topological space in 1968, many concepts in general topology have been moved to fuzzy topological spaces and original studies have begun to be obtained. It is also known that various functional types play an important role in classical topology. Many researchers have extended fuzzy topology to such studies.Various concepts such as fuzzy topological spaces, fuzzy uniform spaces, fuzzy groups, fuzzy vector spaces, fuzzy measures and fuzzy integrals have been investigated by using fuzzy set concept. In addition, Azad (1981) has studied fuzzy semi continuity, fuzzy almost continuity   and    fuzzy   weak  continuity.  Yalvaç  (1987) introduced the concepts on fuzzy sets and function on fuzzy fuzzy spaces. Similar to the minimal structure in topological spaces in Alimohammady and Roohi (2006), they defined fuzzy minimal space concept and developed many theorems and features. In fuzzy minimal spaces, fuzzy minimal functions are defined and some continuity types are given to investigate the relation between them. Dealing with uncertainties is a major problem in many areas such as engineering, medical science, environmental science, social science, etc. These kinds of problems cannot be dealt with by classical methods, because classical methods have inherent difficulties. To overcome these kinds of difficulties, Molodtsov (1990) proposed a completely new approach, which is called soft set theory, for modeling uncertainty. Maji et al. (2003) studied the theory of soft sets and developed several basic nations of soft sets theory in 2003 (Uluçay et al., 2016).
Continuity is a fact known to have an important place in fuzzy topological space as well as in general topology. Like many concepts in general topology, the notion of continuity has moved to fuzzy topological spaces and many original works have begun  to  be  obtained.  In  the literature survey, it has been observed that there are many studies on continuity and continuity types in fuzzy topological spaces.
In this study, concepts of fuzzy set and fuzzy continuity are given and some basic features of them are examined. Some of the features of fuzzy set and fuzzy continuous functions have been proved by taking advantage of these basic features examined. 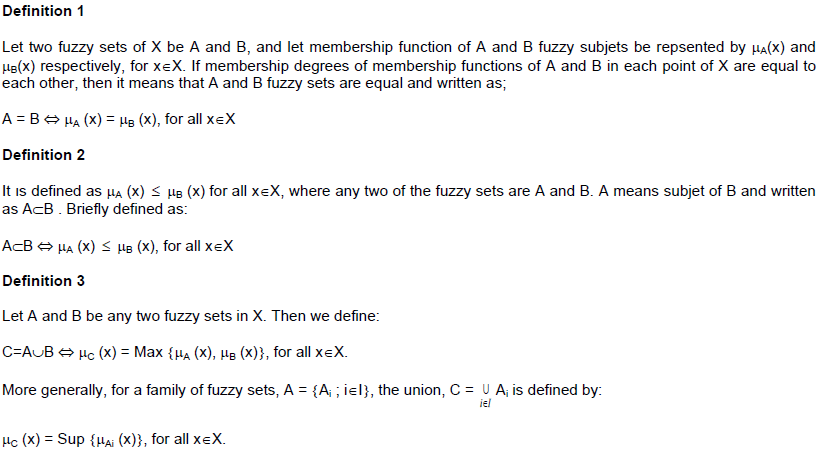 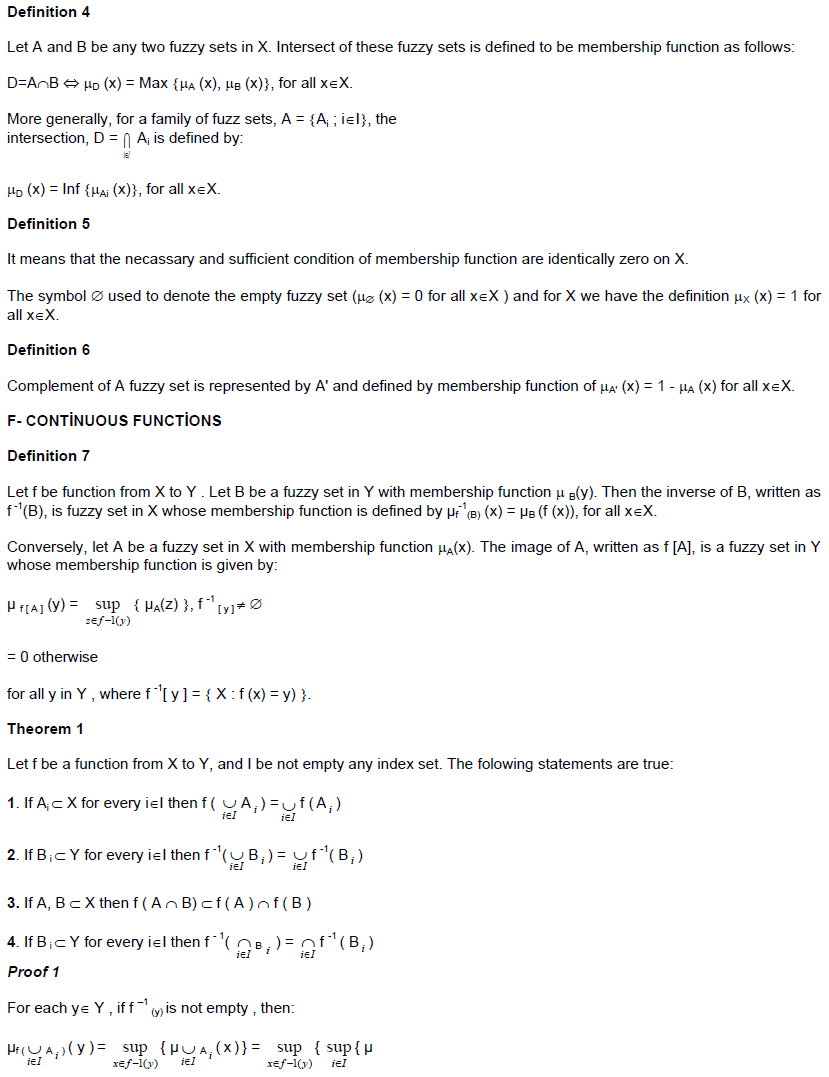 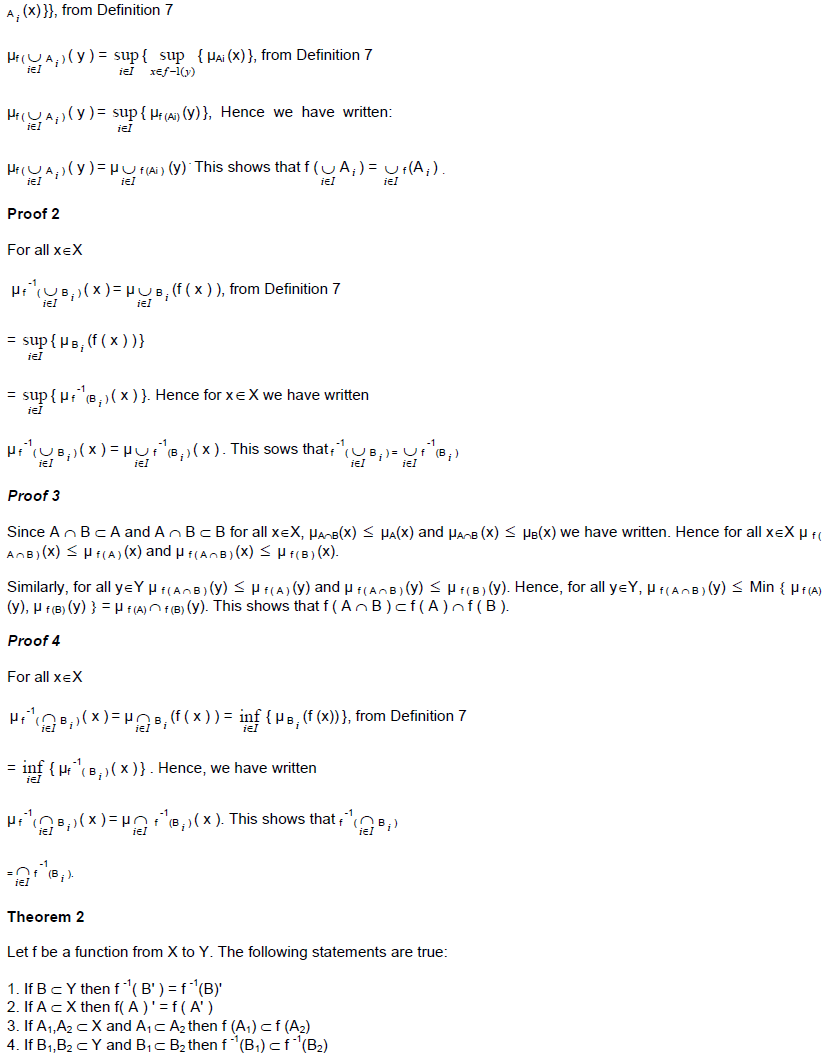 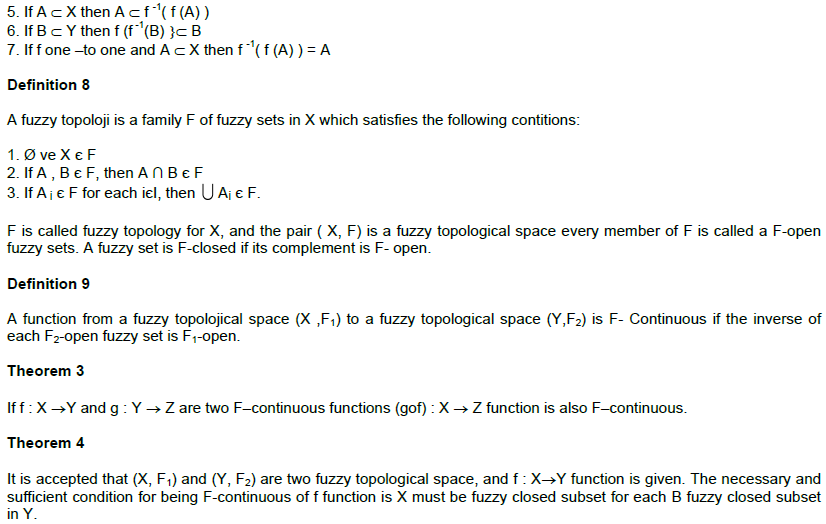 In this study, some definitions of fuzzy membership functions and fuzzy continuity concepts defined by Chang (1968) were investigated by Azad (1981). In Yalvaç's (1987) work, only the expressions given in Theorem 1 have been proven. Furthermore, Yalvaç (1987) has also proven that the Theorem 4 for fuzzy continuous functions has been established and utilized without any stress.