Isolation and identification of microorganisms in selected cosmetic products tester

Components of cosmetics supply a rich medium for the growth of microorganisms. Customers usually like to try cosmetics before buying them. Repetitive use of the eye and makeup tester by different customers may become a potential vector of microbial pathogens. The major goal of this study was to evaluate microbial contamination of the cosmetics that are accessed as an unsealed make-up tester in the selected makeup shops located in Saudi Arabia. Sixty samples of cosmetic testers including mascara, lipstick, blushes, contour, powder, and brushes were collected from shopping malls. These samples were inoculated into different culture media including Blood agar, MacConkey agar, and Saboraud dextrose agar to cultivate fastidious bacteria, coliforms, and fungi, respectively. The microorganisms isolated and identified were: Staphylococcus epidermidis (57%), Candida albicans (27%), Propionibacterium acnes (12%), Pseudomonas aeruginosa (2%), and Staphylococcus aureus (2%). From the sample collected in this project, all bacteria species isolated are considered as skin normal flora except P. acnes and S. aureus that cause acne. The study has concluded that cosmetic testers from selected shopping malls are almost contaminated by bacteria and fungi; the risks generated by inappropriate usage and sharing cosmetics tester samples in public.

Cosmetics have become an important part of everyday life and are widely used for beauty purposes, sun protection, and clearing extraneous matter (OnurdaÄŸ et al., 2010). Abu Shaqra and Groom (2012) assert that cosmetic products contain essential minerals and chemical compounds in water that provide a favorable medium for microbial growth (Dadashi and Dehghanzadeh, 2016). The majority of the people who use shared tools in the beauty shops are  unaware  of the fact that makeup can harbor variety of microorganisms that cause risk for exposure to potentially infectious microorganisms (Enemuor et al., 2013). It is believed that cosmetics can be associated with skin or eye infections which can be transmitted to and between clients if not handled properly (Detmer et al., 2010; Siegert, 2012).
Cosmetic testers in the beauty shops are often contaminated with microorganisms due to the sharing of makeup  and  repeated  use of  the  same  applicators  as well as poor handling during the showcase of the product (Ibegbulam-Njoku and Chijioke-Osuji, 2016; Gamal et al., 2015). Risk of skin infection to consumers can occur as a result of use of skin products such as powder and cream, eye products like mascara and eyeliner (Dadashi and Dehghanzadeh, 2016), and hairdressing (Enemuor et al., 2013). Some pathogenic microorganisms including Staphylococcus aureus and Pseudomonas aeruginosa are detected in beauty products (Sreeparna et al., 2017; Detmer et al., 2010). S. aureus and Staphylococcus epidermidis were the most important bacteria that cause diseases to humans such as skin infection, boils, bullous impetigo, hair follicles, and scalded-skin syndrome in hairdressing and beauty salons in India and Nigeria (Sreeparna et al., 2017; Enemuor et al., 2013; Duggal et al., 2016). Another study showed that Bacillus, Staphylococcus, Pseudomonas, Enterobacter, Escherichia coli, and Klebsiella were the common bacteria isolated from cosmetic products (Bashir and Lambert, 2019).
Skincare products, hair preparations, and facial make-up were responsible for the majority of allergic contact dermatitis in some regions of the Middle East (Abu Shaqra and Al-Groom, 2012; Alswedi and Jaber, 2019).  Herpes causes blisters on the lips and around the mouth from shared make-up tools. Lipsticks and powder brushes that touch these parts of the face can then spread the allergic contact dermatitis infection to other people (Belinda, 2015). Studies by Noor et al. (2015) have revealed that the most common bacteria such as P. aeruginosa and Pseudomonas putida presented on eye makeup include mascara and eyeliner. P. aeruginosa can cause irritation, conjunctivitis, pink eye, redness, and watery discharge, which could lead to irreversible blindness (Noor et al., 2015). Makeup brushes also have the potential to act as suitable homes for bacteria to thrive.
Although the microbial standards of cosmetics have been progressively improved by strict law; their contamination has been frequently reported and even in some cases, has generated serious problems for consumers (Wenli et al., 2019). Unfortunately, cosmetic contamination awareness and health risks are very poor among the users of all age groups. There is no established law, guidelines, and best practices for many public make-up testers. The main objective of this study was to assess the bacterial and fungal contamination from different cosmetic testers in six shopping malls and evaluate customers by using cross sectional study to examine if customers are conscious of the beauty products that are used.

Study design: Survey study
A questionnaire survey model was designed  and  distributed  to  60 randomly selected costumers who used cosmetic testers from 6 different beauty shops in the country of Saudi Arabia at Jeddah city. The ages of the costumers were between 20 and 40 years old at different education level. This survey was used to evaluate customers awareness about the health risks associated with the sharing of cosmetics.
Sampling
A total of 66 samples representing 6 different categories of shared cosmetics testers (10 lipsticks, 10 powders, 10 mascaras, 10 contours, 10 brushes, 10 blushes) as well as 6 sealed (new and unused) were taken from each group for controls. Different batch numbers of each category of testers samples were collected from 6 different cosmetics stores at shopping centers of Jeddah city in Saudi Arabia between January and March of 2019. The samples were collected with the approval of the stores using moistened sterile swabs, transferred into transport media. Then, the samples were carried to the laboratory and stored at room temperature for 24 h to be analyzed.
Media use and isolation process
Three different media were used (Blood agar, MacConkey agar and Saboraud dextrose agar) to cultivate fastidious bacteria, coliforms, and fungi, respectively. The culture media were prepared and instructions from the Micromaster, India manufacture were followed. Sixty swabs of shared cosmetics testers, six sealed samples were collected, and each sample was inoculated on 3 different solidified media mentioned earlier. The dishes were incubated for 24 h at 37°C while SDA plates for fungi identification were incubated at 28°C and observed daily for 7 days. All plates were observed for the growth of microbial colonies after incubation to identify colonial morphology. Gram stains were carried out to determine if bacteria were Gram-positive bacteria, Gram-negative bacteria, and yeast.
Biochemical tests
Biochemical tests fall under phenotypic methods for microbial isolation. Protocols for standard biochemical tests were followed and used to identify the bacteria and fungi in respect of the genus and the species level (Bergey and Holt, 2000). For Gram-positive cocci, we have used the following tests: catalase, coagulase, novobiocine, and bile-esculin. However, Kligler Iron Agar test, motility, indole test, and citrate biochemical tests were used to identify Gram-negative bacilli. Various Candida species can be detected by a germ test tube and sugar fermentation tests including glucose, maltose, and sucrose, which cause a color change as an indicator.

The cosmetic product tester’s analysis showed that more than 70% of examined samples of lipsticks, powders, mascaras, contours, brushes, and blushes were contaminated with microorganisms.
The morphological characterization and biochemical tests showed that 73% of the samples were contaminated with bacteria in comparison to 27% of the samples contaminated  of   fungal   growth  (Table  1).   The   most predominant isolated bacteria were S. epidermidis with 57% of samples contaminated with this species. P. aeruginosa was the least frequently isolated bacteria with 2% only. S. aureus was only observed in brush samples with 2%. 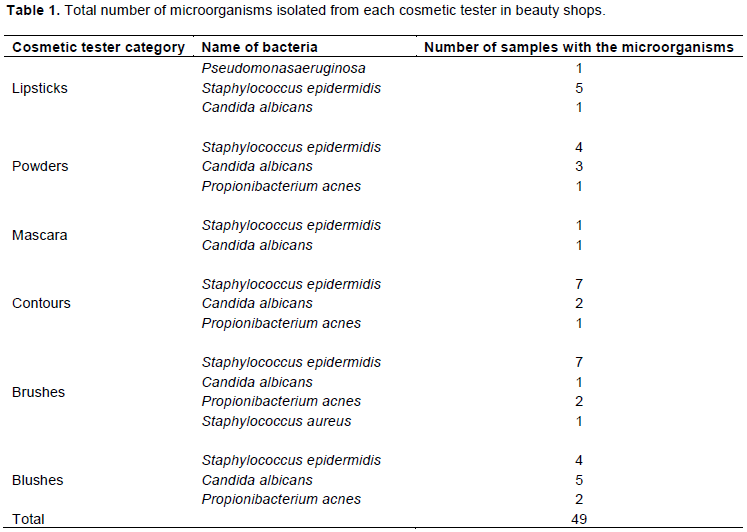 Depending   on   the  results  of  germ  tube  and  sugar fermentation and results presented in Figure 1, it showed Candida albicans was the only isolated yeast with 27%. In addition, 12% of samples were contaminated with Propionibacterium acnes from most of the cosmetic testers: brushes, blushes, powders, and contours.
The written questionnaire that was collected from random customers showed that 52% of women believed that the cosmetics testers caused diseases, allergies, and irritation to the skin. The awareness rate of the bacteria that might appear in the cosmetics testers was high. Twenty four percent of women do not use cosmetics testers on their faces directly. Seventy six percent of women believed that the validity of cosmetics testers is affected by the use of products (Figure 2).

In this study, bacterial contaminations of the cosmetics tester material were more than those associated with fungi. The microorganism contamination rate in the contour, brushes, and blushes was higher than the other cosmetics because they are frequently in contact with air.
The use of non-sterile cosmetic testers can spread bacteria from one person to another and possibly can cause  infection on the eye or skin. In this study, bacterial contaminations were more than fungi. Our results showed 27% of shared cosmetic testers that were contaminated by fungus and yeast. In other studies, the fungus contamination ratio in cosmetics was low because beauty products have a protective material that prevents fungi growth (Dadashi and Dehghanzadeh, 2016). In the current study, a S. epidermidis was the most common species isolated from some different cosmetic testers. These species are considered to be a normal flora of the skin. However, Streptococcus species in the cosmetic testers were also identified and could be pathogenic organisms that occurred in some regions including the Middle East in which it could cause a skin infection such as acne and herpes (Gevers et al., 2012; Sohn, 2018; Abu Shaqra and Al-Groom, 2012; Alswedi and Shakeir, 2019). P. acnes were one of the bacteria that caused acne observed in tester samples (Scholz and Kilian, 2016). Furthermore, S. aureus was isolated and is among the most important bacteria that cause disease in humans including skin infections and abscesses (Al Kindi et al., 2019). These symptoms could occur due to the impairment of the human immune system, skin structure, and wounded epithelium (Al Kindi et al., 2019).
Based on the outcome of this study, it showed no microorganisms growth on the sealed cosmetic samples and possibly due to preservatives of the cosmetics in a sterile condition (Giacomel et al., 2013).
In the current study, the contamination rate in the contour,  brushes,   and  blushes  was  higher  than  other testers and C. albicans was the only yeast observed in the cosmetic testers that induced skin infection. The preservatives ingredients in the formulation of cosmetics products might increase the contamination rate (Halla et al., 2018).
According to the results of the questionnaire, the study addressed the possibility of beauty shops acting as a source of infection among consumers. The survey results are interesting because it showed that customers tended to continue to use make-up beyond the contamination.
Public health organization recommended using cosmetic products tester correctly to decrease the health risks. Customers must use sterile tools and to avoid trying cosmetic testers on the face. It is necessary to use sealed makeup instead of testers. Moreover, dispense the makeup if it has been used for more than three months. If the individuals are educated on the risks of the dangers, they would help in improving their practices and by doing that, it decreases the spread of these contaminations. In the future, more microbial analysis needs to be examined.

Overall, this research was an informative view of the importance of not sharing cosmetic samples in public to prevent skin infections. In shopping malls, cosmetic testers almost contaminated  by bacteria  and  fungi as a study has been concluded. By sharing cosmetics in public, the possibility of infection can occur. Furthermore, scrutinizing this topic was practicable and intriguing.