Actinomycetes have been demonstrated for plant growth-promotion, antagonistic against plant pathogens and insect pests and biofortification traits in many agriculturally important crops. The present investigation was conducted to characterize probiotic properties of actinomycete(s) isolated from pearl millet flour and batter samples. A media selective and specific were used for isolation, actinomycetes isolation agar (AIA), and the most prominent actinomycete (found abundantly in the AIA plate) was isolated and maintained on AIA slants at 4°C for further investigation. The most prominent actinomycete was characterized for traits including Gram staining, morphology (such as color, margin, size, shape, elevation, form and surface), biochemistry (such as urease, catalase, oxidase, hydrogen sulphide, nitrogen reduction, gelatin liquefaction, starch hydrolysis and carbohydrate utilization), IMViC tests (such as indole, methyl red, Voges Proskauer and citrate utilization), probiotic potentials (such as acid [pH 2, 3], bile [0.5%], NaCl [6 and 9%], phenol tolerance [0.4%]), antibiotic tolerance (such as tetracycline, streptomycin, kanamycin, chloramphenicol, ciprofloxacin, ampicillin, penicillin, erythromycin and vancomycin) and antimicrobial activities against human pathogens (such as Escherichia coli, Staphylococcus aureus and Salmonella typhi). It was possible to isolate only one probiotic actinomycete based on the properties. The sequences of 16s rDNA gene of the actinomycete was matched with Streptomyces species in BLAST analysis. The sequences of the Streptomyces spp. were submitted to NCBI and accession number obtained. This study indicated that the selected Streptomyces spp. could be used to develop new probiotic foods.

Nutritional quality of food is important not only for maintaining human health but also for physical well-being and this is attained mainly by eating cereals. Wheat and rice are the important staple  food  for  people across the world that lead not only to an array of emerging life style diseases but also challenging nutrition and human health. Hence, there is an urgent need for recommending diversity in diets through inclusion of other cereals such as millets in order to enhance the nutritional status and address malnutrition across the world. Millets are not consumed widely as a staple, except by people inhabiting the semi-arid tropics in Asia and Africa, though these are widely used as animal or bird feed. Pearl millet (Pennisetum glaucum) is one of the important foods for people living in Asia and Africa, being a major source of calories and a vital component of food security (Amadou et al., 2013). Pearl millet is well-adapted to cultivation systems characterized by high temperature, low rainfall (below 600 mm), low soil fertility and resistance to pests and diseases and thus is suited to the semi-arid tropics. It is often ground into flour and consumed as porridge, roti and beverages (Obilana and Manyasa, 2002; Amadou et al., 2011). It also serves as the source of prebiotics (such as total oligosaccharides, resistant starch, total dietary fiber and β-glucan) for functional food (Awika and Rooney, 2004; Ige, 2013). Any food or food ingredients in association with probiotic microbes either influence beneficial effect on the host or reduce the risk of chronic diseases are referred as functional foods (Huggett and Schliter, 1996; Charalampopoulos et al., 2002; Hassan et al., 2014). Probiotic foods normally contain a single or mixture of probiotic microorganisms that improve the health of the host by improving intestinal microbial balance (Fuller, 1989). Probiotic microbes are being used for preparation of dairy food for thousands of years. Recently, non-dairy based probiotic drinks utilizing pearl millet are also reported (Syal and Vohra, 2014; Mridula and Sharma, 2015). Probiotic microbes associated with cereals such as wheat, rice and sorghum are reported widely but not much information is available for pearl millet cultivars (Badau, 2006).
Actinomycetes are a group of Gram-positive bacteria, with high G + C content belonging to the order Actinomycetales, found commonly in compost and rhizospheric soil. They play an important role, not only on plant growth-promotion (PGP), antagonistic action against pathogens and insect pests and biofortification traits in many agriculturally important crops, but also on decomposition of organic materials and production of secondary metabolites (Glick, 2010). Plant growth-promoting properties of actinomycetes was reported on cereals (such as wheat (Sadeghi et al., 2012), rice (Gopalakrishnan et al., 2014) and sorghum (Gopalakrishnan et al., 2013)) as well as legumes (such as bean (Nassar et al., 2003), chickpea (Gopalakrishnan et al., 2015, 2016a), pigeonpea (Gopalakrishnan et al., 2016b) and pea (Tokala et al., 2002). Actinomycetes have also been demonstrated for biocontrol of soil-borne pathogens (Mahadevan and Crawford, 1997; Trejo-Estrada et al., 1998; Macagnan et al., 2008; Gopalakrishnan et al., 2011) and insect pests (Gopalakrishnan et al., 2016c; Sathya et al., 2016 a, b). However, not much information on the usefulness of actinomycetes on prebiotics is available. Therefore, in the present   investigation,   an   effort   has   been   made  to
characterize probiotic properties of actinomycete(s) from flour and batter samples of pearl millet cultivars.

Isolation, morphological and biochemical characterization of the actinomycete
The most prominent isolate, PDPF-21 (which was found abundantly in the actinomycetes isolation agar (AIA); selective and specific media for isolation of actinomycete), was isolated from the fermented batter samples of pearl millet and maintained on AIA slants at 4°C for further studies. PDPF-21 was found to be circular in form, punctiform in size, rough in surface, dry in texture, white in color, umbonate in elevation and entire in margin in the morphological studies. It was found to be Gram positive in the Gram staining test. When characterized for biochemical traits, it was found positive for urease, catalase, Vogues Proskauer and sucrose utilization tests but negative for hydrogen sulfide, oxidase, nitrate reduction, gelatin liquefaction, starch hydrolysis, indole, methyl red, citrate utilization and lactose utilization tests (Table 1).

Antibiotic resistance pattern and antimicrobial activity of the actinomycete PDPF-21
The selected actinomycete PDPF-21 was found resistant to tetracycline (at 30 µg), streptomycin (at
10 µg), kanamycin (at 30 µg), chloramphenicol (at 30 µg), ciprofloxacin (at 10 µg), ampicillin (at 10 µg), penicillin (at 10 µg), erythromycin (at 15 µg) and vancomycin (at 10 µg). PDPF-21 was also found to have antagonistic properties against human pathogens including E. coli, S. aureus and S. typhi, as it significantly inhibited all three pathogens (more than 10 mm inhibition zone), of which the strongest antagonistic activity was noted against  E. coli (Table 2).

Probiotic traits and molecular identification of the actinomycete PDPF-21
When  PDPF-21  was  tested for its probiotic properties, it was found to tolerate acidic pH (pH 2), bile (0.5%) and NaCl (6%) but not phenol (Table 3 and Figure 1). A neighbor-joining dendrogram was prepared using the sequences of PDPF-21 (1400 bp) and representative sequences from the databases. Phylogenetic analysis of sequences of the PDPF-21 matched with Streptomyces species (Table 3 and Figure 1). 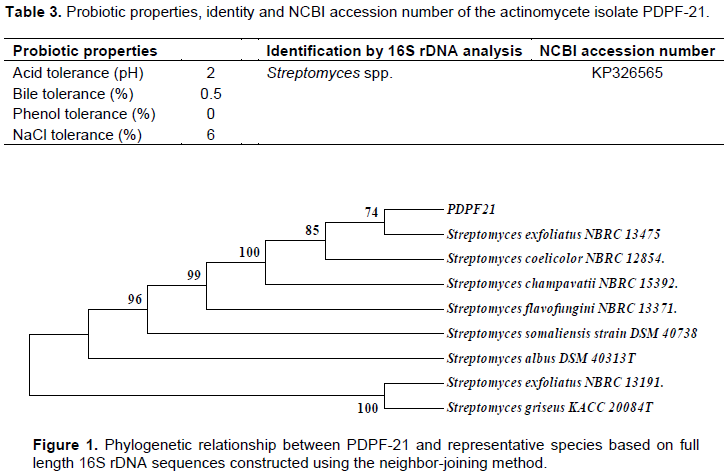 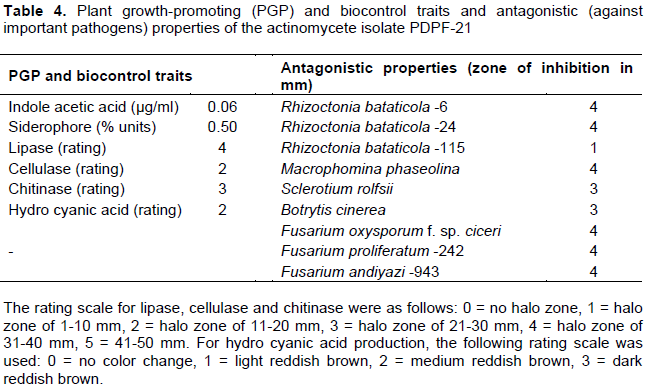 Probiotic foods help the existing microflora to stabilize or repopulate the microflora in the colon, lost due to disease, antibiotics and/or chemotherapy. Pearl millet is one  of  the  important  staple  food  for  millions   of  poor  people in Africa and Asia as it contains high carbohydrate energy and nutrition, thus making it useful component of dietary and nutritional balance in human food and animal feed. Foods from pearl millet are reported to be rich in phytochemicals (such as phytic acid and phytates) and generate vitamins, fatty acids and other vital nutrients that improve body’s resistance against pathogens, lower cholesterol and reduce the risk of cancer (Coulibaly et al., 2011; El-Salam et al., 2012). In the present study, pearl millet flour and batter samples were explored for specifically isolating and characterizing probiotic actinomycetes.
It is widely accepted that one of the important criteria for isolating and/or selecting probiotic potential bacteria should be its ability to inhibit human pathogens and resistance to broad range of antibiotics. In the present investigation, the selected actinomycete PDPF-21 was found to inhibit all the tested pathogens, including E. coli, S.  aureus   and   S.   typhi   and  exhibited  resistance  to tetracycline, streptomycin, kanamycin, chloramphenicol, ciprofloxacin, ampicillin, penicillin, erythromycin and vancomycin in the antibiotics resistance pattern (Table 2). The main aim of using probiotic strains should be to beneficially affect the gut microbial composition and functionality. Oluwajoba et al. (2013) reported similar results on lactic acid bacteria (LAB). The same authors noted that LAB, isolated from millet grains and fermented products, inhibited human pathogens such as S. aureus 25923, E. coli 25922, Pseudomonas aeruginosa 27853 and Enterococcus faecalis 29212. Probiotic potential bacteria such as Lactobacillus fermentum, Bifidobacterium species and Weissella confuse were also found to help in preventing and treating acute diarrhea (Lei and Jakobsen, 2004). It is concluded that the selected actinomycete PDPF-21 has good antagonistic potential against important human pathogens and antibiotic resistance patterns.
Perhaps,   the   most   important   selection   criteria  for isolating and identifying suitable probiotic microbe should be their ability to survive in acidic environment of the final fermented product and the adverse conditions of the gastrointestinal tract. Hence, in the present investigation, the actinomycete PDPF-21 was characterized for its probiotic properties including acid tolerance, bile tolerance, phenol tolerance and NaCl tolerance and found to tolerate acidic pH (pH 2), bile (up to 0.5%) and NaCl (up to 6%) but not phenol (Table 3). Therefore, it is concluded that the selected actinomycete has the desirable properties in order to qualify as a probiotic.
In order to determine the identity of the selected actinomycete, its 16S rDNA was sequenced and analyzed. A neighbor joining dendrogram generated using the sequence from the selected actinomycete (1400 bp) and representative sequences from the databases revealed that it belonged to Streptomyces spp. Pearl millet flour has been used for isolation of LAB including Lactobacillus plantarum, Lactobacillus cellobiosus, Lactobacillus pentosus, Leuconostoc mesenteroids, Bacillus subtilis, Pedicoccus pentosaceus, Streptococcus lactis and Torulopsis glabrata (Badau, 2006; Kamgar et al., 2013; Okoronkwo, 2014). Microbes such as Lactobacillus, Bifidobacterium and Weissella spp. are reported widely as probiotic microbes. Mridula and Sharma (2015) reported a non-dairy probiotic drink from the sprouted cereals, legumes and soy milk using LAB. Lactobacillus acidophilus was used to ferment a food mixture containing sorghum flour, whey powder and tomato pulp (Jood et al., 2012). However, to our knowledge, there are no reports till date on any actinomycete, Streptomyces spp., showing probiotic potential. Therefore, the selected actinomycete Streptomyces spp. can be exploited for development of functional foods. Streptomyces spp. have been widely reported and demonstrated under field conditions as plant growth-promoters and biocontrol agents in both cereals and legumes (Tokala et al., 2002; Nassar et al., 2003; Sadeghi et al., 2012; Gopalakrishnan et al., 2013, 2014, 2015, 2016a, b, c). In the present investigation, when the Streptomyces spp. PDPF-21 was evaluated for its PGP and biocontrol traits, it was found to produce IAA, siderophore, lipase, cellulase, chitinase and HCN and inhibit many plant pathogens of chickpea and sorghum (Table 4). Hence, it is concluded that the selected Streptomyces spp. PDPF-21 is having not only probiotic properties but also plant growth-promoting and biocontrol properties.

Pearl millet is not only a valuable source of prebiotics and bioactive compounds (such as resistant starch, total oligosaccharides, total dietary fiber and β-glucan), useful for development of functional foods, but also source of probiotic microbial cultures, which should be exploited for the production of new and innovative functional foods.  The multiple beneficial effects of pearl millet can be used in association with probiotic microbes isolated from pearl-millet in designing novel cereal-based functional foods targeting different consumer segments having specific health requirements. The present work has identified a probiotic actinomycete strain from pearl millet that can be exploited for designing novel cereal based functional foods for addressing food and nutritional security for millions of malnourished people living in the poor countries of Africa and Asia. Probiotic foods obtained using a multiple microbial strains provide the opportunity to develop innovative food products with enhanced flavor, taste and texture based on consumer preference, unlike single strain based products that are usually sour and acidic in taste (Saarela et al., 2000). This study, thus, gives an opportunity to further explore the possibility of amending the selected actinomycetes with other known probiotic strains and/or exploring more probiotic actinomycetes towards development of functional foods.