The aim of this study was to determine the prevalence and genetic diversity of the strains of Bacillus cereus groups isolated in México from foods for infants and young children. A total of 94 foods from a single commercial brand were analyzed to find B. cereus through a pre-enrichment method of colonial morphology in agar mannitol yolk polymyxin. Specific colonies were selected to be analyzed by polymerase chain reaction (PCR) determining the amplification of the 16S rRNA gene from B. cereus and the cytotoxin K gene. Eight strains were selected to determine genetic diversity (and relation) between the isolates from a PCR of repeated elements (rep-PCR), technique of molecular phylogeny that uses the primer (GTG) 5. The genetic similarity was determined by the Dice coefficient and from this a dendrogram was carried out. Isolates corresponding to strains from B. cereus group were detected in 9.2% (8/92) of the samples analyzed, 87.5% of the eight isolates showed the cytK gene. Groups of isolated strains were detected in meats and fruits and there was only one isolated strain from vegetables. The study shows the presence and propagation of strains from B. cereus group in foods for infants and young children commercialized in México.

Foods for infants and children are mainly used during the normal weaning period and during the gradual adaptation of infants and children to normal feeding. They are prepared to be directly administered or dehydrated to be reconstructed through water dilution.  The microbiological criteria for these foods state that they must  be  free  from pathogenic microorganisms or self-produced substances in amounts that could cause disease (CAC, 1979; FAO/WHO, 1981).
The Bacillus cereus group is made up of six species of bacteria closely related: B. cereus sensu stricto, Bacillus antrhacis, Bacillus  mycoides,  Bacillus  pseudomycoides, Bacillus thuringiensis and Bacillus weihentephanensis (Vilas-Bôas et al., 2007). This group of bacteria is spore-forming Gram-positive bacilli with a wide spread in the environment, decomposing organic matter, fresh or salty water bodies, fomites, and naturally in the gastrointestinal tract of invertebrate organisms. Foods may be contaminated by these reservoirs and colonize the human intestine upon ingestion (Samapundo et al., 2011).
Some species from the B. cereus group may cause food poisoning due to the production of different toxins: cerulide is a thermostable toxin resistant to acid pH and proteases, composed of four amino acids and/or oxyacids [D-O-Leu-D-Ala-L-O-Val-L-Val] that form a cyclic complex (dodecadepsipeptide) (Stenfors-Arnesen et al., 2008). This toxin causes the afferent vagus nerve stimulation through the attachment to 5-HT3 receptor of serotonin, causing the emetic syndrome characterized by nausea and vomit. The main related foods are rice, pasta and dairy products. The presence of the preformed toxin in the foods is enough to cause the disease (Delbrassine et al., 2012; Dommel et al., 2010).
In contrast, diarrhea toxins like hemolysin BL (Hbl), non-hemolytic enterotoxin (Nhe) and cytotoxin K (CytK) are produced during the vegetative growth of the bacteria in the small intestine (Naranjo et al., 2011). The Hbl and Nhe enterotoxins are made up of three subunits; L2, L1B, and NheA, NheB, ans NheC, respectively, whereas the CytK is made up of a single protein from the family of barrels β (Bottone, 2010). The three toxins have lytic activity against enterocytes, the mechanism is not precisely known, however, it suggests the formation of pores in the lipid membranes of cells, which leads to osmotic lysis (Stenfors-Arnesen et al., 2008; Tsilia et al., 2012).
A high frequency of isolated toxigenic strains from group B. cereus has been recently reported in different food groups, including foods rich in starch (rise and potatoes), raw or partially cooked vegetables, dairy and meat products, and ready-to-eat foods (Chon et al., 2012; Lee et al., 2012; Samapundo et al., 2011).
Diseases related to foods contaminated by species from group B. cereus generally occur when toxigenic strains multiply and reach around 104 to 106 CFU, however, due to the high variability of infectious doses, as well as toxin production and spore formation, it is not possible to rule out the risk of smaller size inoculates (Logan, 2012).
In 2015, in the United States of America, two food poisoning cases caused by B. cereus were reported with 25 people without going to hospital (Centers for Disease Control and Prevention (CDC), 2017). Meanwhile, in countries like Norway, Finland, and Hungary, B. cereus has been held accountable for gastrointestinal diseases (diarrhea syndrome) in contrast with countries like China, Japan, and Belgium, where it is linked to the emetic syndrome (Granum and Lund, 1997; Logan, 2012). The existence  of   B.  cereus  as  a  contaminant  of  food  for babies has been reported in China (Li et al., 2014; Zhang et al., 2017) and Iran (Rahimi et al., 2013), and currently, in Mexico there are no data about this microorganism. In Mexico, until March 2018, over 600 food poisoning cases and more than 90,000 gastrointestinal diseases have been reported without identifying the causal agent (Dirección General de Epidemiología, 2018). The aim of this study was to analyze and compare the B. cereus frequency in a wide array of foods for infants and small children, the presence of cytotoxin K gene, and possible strain cloning.

In the present study, numbers above 4.0 log CFU/g of aerobic mesophilic in foods was observed for infants of meat and fruit varieties. However, one of the most important results was the presence of B. cereus in all varieties of foods for toddlers (Table 1).
To confirm the proper classification of isolates, the amplification by PCR of the 16S rRNA gene was used. PCR amplification products of the nearly complete 16S rRNA gene were observed (1500 bp about) in eight strains (Figure 1). The results obtained for their strains confirmed their taxonomic position as belonging to the B. cereus group.
PCR was used for the detection of the cytK gene in eight strains belonging to the B. cereus group. An amplicon, 238 bp long was obtained containing the N-terminal fragment of the structural gene. It was found that among eight isolates, most of them (7 strains, 87.5%) contained the cytK gene (Figure 2)
Upon identifying possible cloning of strains, four different groups could be observed; three of them positive for cytotoxin K. In one of them, an isolated vegetable strain was grouped, whereas isolated meat strains were distributed among the remaining groups. In the first group both meat and fruit strains were grouped (Figure 3). 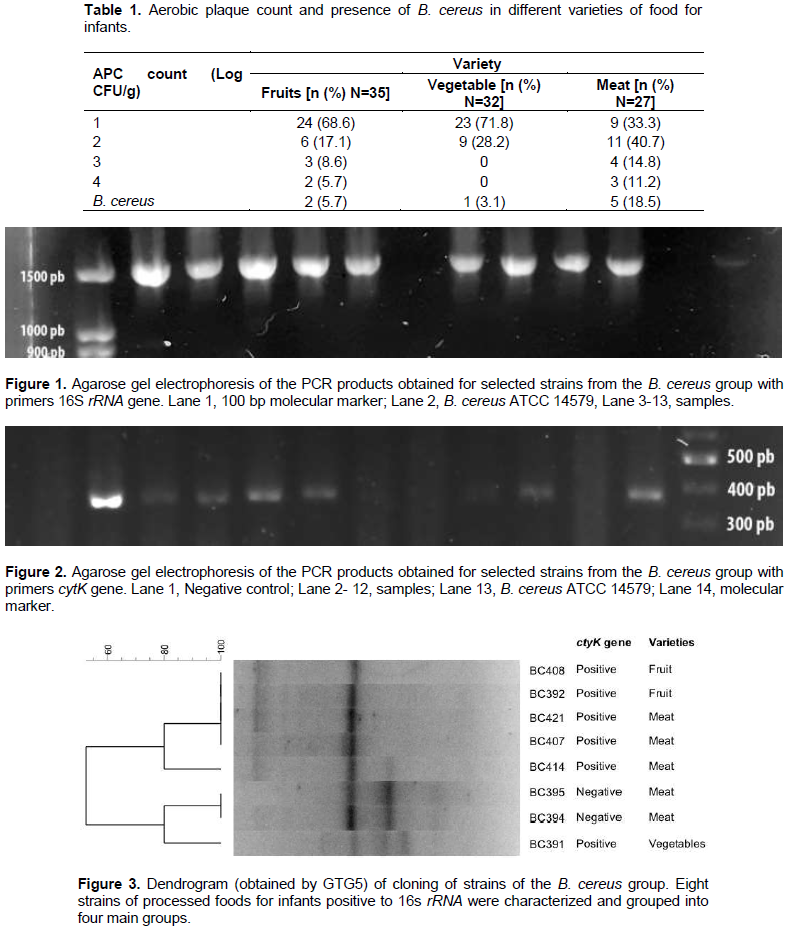 In recent years, the role and importance of B. cereus as a pathogen associated with food poisoning has increased (Jeßberger et al., 2015). Even though risk groups have not been described, it has been reported that the infection is not self-limited in all cases and that it can even progress to death (Dierick et al., 2005; Lund et al., 2000).
In children under two years old, in addition to breastfeeding, different sorts of packaged foods are included in the diet, importantly; this group of foods is recognized as non-sterile, establishing internationally the microbiological parameters that these must meet (FAO/WHO, 1981).
At a national level, the Mexican regulations framework considers as a quality parameter the amount of CFU/g of aerobic mesophilic (Secretaria de Salud (SSA), 1995). In this study, five fruit samples and seven meat samples exceed this amount; an important feature in this regulation, is not included the amount of CFU/g or the presence of B. cereus as an important microbiological indicator, even when the population to which these products are directed, could be a risk group. In this study, B. cereus was isolated in all varieties with a frequency of 9.2%; in studies carried out in China, the prevalence ranges from 1 to 6% (Li et al., 2014; Zhang et al., 2017), while in Iran it is 42% (Rahimi et al., 2013), considering that the main difference is the type of variety analyzed,  in these three studies the base was rice and in the present study, it was rice-based foods, fruits and vegetables were included.
These data as a whole denote the capacity of the spores of the Bacillus genus to resist thermal treatments (wet and dry heat), radiation (UV and ionizing) and chemical agents (Setlow, 2006), treatments to which these products are subjected to their preparation and packaging, particularly sterilization (variety of meats) and airtight seal (varieties of vegetables and fruits) (SSA, 1995); even when only the presence was determined (not the quantity), it is an important fact because these foods are stored for long periods of time either in shops or at home, which can favor the growth of the microorganism to an infectious dose (Valero et al., 2003), which has been described in vegetable purees, where the aerobic spore increased 7.8±0.1 log CFU/g in the puree after five days at 20 to 25°C and the vegetative cells of B. cereus approximately 6.4±0.5 log CFU/g in the same period of time and temperature (Guinebretiere et al., 2003). In addition, minor inoculants should therefore not be ruled out due to the toxigenic potential of each strain (Logan, 2012).
B. cereus is a microorganism with a wide variety of virulence factors, including emetic toxin and the enterotoxins  Hbl,  NHE  and CytK (Bottone, 2010). In this study, the cytK gene was molecularly identified, because the presence of this gene has been determined in strains that caused food poisoning (and that are negative for NHE and Hbl) (Lund et al., 2000). The frequency in this study was 87.5%, which is like that reported in a study in Belgium in ready-to-eat foods (Samapundo et al., 2011).
The intention to identify a possible clone in this type of food was focused on the search for a clone that will be isolated from all varieties of these foods and that may be related to a systematic contamination during its production and processing, due to its persistence in the area and resistance of the spores produced. For example, certain characteristics of spores, such as hydrophobicity or the presence of exosporium favor their ability to adhere to surfaces involved in the food processing (Tauveron et al., 2006). Additionally, it has been observed that this microorganism is capable of producing biofilm, which protects both the spores and vegetative cells from disinfectants (Ryu and Beuchat, 2005); this could be explained with the strains that belong to the first generated group. However, the presence of strains, such as the strain isolated from vegetables, could explain that the contamination of this microorganism may not only be found in the process, but also in the raw material. Related to this, the presence of B. cereus in dairy products was shown from early stages of product processing, which include contamination of raw material (Svensson et al., 2004) or even in raw vegetables for the preparation of puree (Choma et al., 2000), which is capable of enduring thermal and pressure processes to which the food is subjected (Guinebretiere et al., 2003) and this could explain the presence of the strain found in vegetables and not in other food groups.
This study proposes the incorporation of this microorganism in the current Mexican legislation, due to the characteristics that allow it to be found in food, as well as virulence factors that could cause major food poisonings in the group to which these foods are directed.

The study shows the presence and propagation of strains from B. cereus group in foods for infants and young children commercialized in México.

The authors would like to express their heartfelt thanks and deep appreciation to University Autonomy of Guerrero. The work was financed by the “Programa de IncorporacioÌn    de   Nuevos    Profesores    de     Tiempo Completo” by the Secretaria de EducacioÌn PuÌblica, MeÌxico.