The objective of this study was to improve rice and maize yields using native Azospirillum-based biofertilizer. To reach this objective, samples of rhizosphere soil, non-rhizosphere soil and roots of maize plants were collected from the particular locations of Samanko and Bamako of the south Mali. Thirty-three different colonies of bacteria were isolated from the different samples. Based on their better growth in nitrogen free semi-solid medium, their morphological, biochemical and plant growth promotion characteristic, ten bacterial isolates were identified as Azospirillum isolates following the Bergey’s Manual of Determinative Bacteriology. Ten isolates were selected: Az1, Az2, Az3, Az4, Az5, Az6, Az7, Az8, Az9 and Az10. Strain Az6 showed great potential on both rice and maize production. Therefore, this strain is suggested for large scale rice and maize fields’ application. While the Azospirillum sp. Az5, Az6 and Az10 strains are suggested for large scale application in maize field, which may reduce production cost. Top dressing with 25% of the recommended nitrogen-fertilizer was found to decrease maize grain yield.

In Mali, in recent years, a significant drop in cereal yields, mainly maize (Zea mays L.) which occupies an important place in agricultural production systems in agroecological zones has been registered. Maize is one of the main cereals used to feed people in Africa (Macauley and Ramadjita, 2015; Ranum et al.,  2014).  Although  a  food crop, maize represents also a cash crop for many small farmers. It has a high yield potential, and it is easy to prepare and digest. All parts of the plant (stem, leaves, tops and seeds) have economic value. They can all be used to produce a wide variety of food (for Human and animals) and non-food products (Ranum et al., 2014).
Maize is one of the most crucial and strategic cereals for achieving food self-sufficiency in Mali. Several factors explain its reduced yields such as soil mineral deficiencies, soil salinity, pH, temperature, heavy metals, phytopathogens, poor farming practices and harmful insects. Among these factors, soil nitrogen deficiencies, soil salinity and phytopathogens constitute the main constraints in Mali.
In recent years, much work in the world has been devoted to the use of soil bacteria to improve plant production (by improving its growth and protection), while reducing the use of chemical compounds which are more are expensive and harmful to Human and the environment. These plant growth-promoting rhizobacteria (PGPR) belong to different genera such as Pseudomonas, Azospirillum, Azotobacter and Bacillus (Sharma et al., 2017). These plant growth-promoting rhizobacteria (PGPR) improve plant growth and nutrition through phyto-stimulatory activities, hormonal mechanisms and phytoprotective functions (antagonism, competition or induction of systemic resistance) (Kannojia et al., 2019). The use of phytosanitary products can impact the soil microbial biodiversity (Annapurna et al., 2013). To do this, a possible strategy is based on the use of microorganisms whose phytobenefic effects would limit the use of chemical inputs (Abiala et al., 2015; Biessy et al., 2019).
There is evidence that inoculating maize seeds with effective rhizobacteria can improve maize production (Amogou et al., 2019; Kuan et al., 2016). Among the rhizobacteria most often used in organic fertilization, Azospirillum have shown a significant effect on maize, wheat, rice, sorghum and sugar cane production (Santa et al., 2004; Galindo et al., 2019) and have phytoprotective activities (Pieterse et al., 2003; Moënne-Loccoz et al., 2015).
Although Mali is among the biggest rice and maize producing countries in Africa, and nitrogen fertilization is more than necessary to increase the production of these cereals, very few studies have been undertaken so far on the use of native free and endophyte Azospirillum as organic fertilizer to improve rice and maize yields. This study aims to isolate effective Azospirillum isolates and formulate efficient as well as easy to use Azospirillum-based biofertilizer to improve maize and rice growth and yields.

Nitrogen-fixing bacteria isolated
Sixty-six nitrogen-fixing bacteria were isolated from soils and different parts (Rhizoplane, xylem and endosphere) of maize plants, sampled in the two sites (Samanko and LaboREM, Bamako, Mali) investigated in this study. Based on their ability to grow better and faster in Nfb semi-solid medium in screw capped test tubes but not in Nfb agar medium in plates, 10 isolates were selected out for further studies. No isolate was obtained from non-rhizosphere soil, contrary to the rhizosphere soil and the rhizoplane where the maximum number of isolates was obtained. All the bacterial isolates from LaboREM-Biotech location were from the rhizoplane.
Azospirillum bacteria identified
Colony aspects of isolate Az10 on Nitrogen free medium (Figure 1A) and Congo red medium (Figure 1B) are presented in Figure 1, while Gram and vegetative cells of Azospirillum sp. Az6 are presented in Figure 2.
Data collected on morphological and biochemical characteristics of the ten nitrogen-fixing bacterial isolates showed that: all the ten selected isolates presented brownish and flat colonies on Azospirillum medium. They were curved, Gram negative, mobile, catalase and oxidase positive. They produced hydrogen sulfide, reduced nitrate and utilized lactose, mannitol and galactose as carbon source. The ten selected bacteria isolate can utilize biotin, but cannot hydrolyze the gelatin nor utilize xylose, glucose and sucrose, as carbon source. Considering all the identified characteristics, Az1, Az2, Az5, Az6 and Az10 were identified as Azospirillum brasinense.
The analysis of data in Table 1, shows that only the Azospirillum isolate Az5 produced all the compounds assessed, followed by the isolates Az3 and AZ8 who were only cellulase negative. Contrary to Az3 and Az8, the isolate AZ9 produced all the compounds but did not solubilize phosphates. Siderophores and cyanhydric acid have been produced by all tested isolates, but the isolates Az2, Az4, Az7 and Az10 were not able to produce the indole acetic acid. All selected Azospirillum isolates can grow normally at a temperature between 22 to 45°C, at pH range of 4.5 to 9.8, and in media containing 40 to 500 mM of NaCl.
Effect of the Azospirillum isolates on rice growth
Inoculation with the isolated Azospirillum sp. strains significantly increased seed germination, plant height, root and shoot fresh and dry weights of rice (Oryza sativa L. cv. Adny11) (Table 2). No significant effect was observed between the different repetitions. This indicates, for example, that the percentage germination of seed treated or not by Azospirillum sp. will not be affected differently by the different repetitions.
The effects of Azospirillum sp. isolates on germination rate, plant height, root length, fresh shoot and root biomass and stem diameter of rice (O. sativa L. cv. Adny11); showed that seed inoculation significantly enhanced rice seed germination. However, the rate of enhancement varied with bacterial strains. All the Azospirillum sp. strains tested, significantly increased seed germination over the non-treated control. The highest percentage of seed germination was recorded with Az4 (85%) and highest plant height, root and shoot biomass were recorded with Az6, followed by Az3, Az8 and Az5 (Figure 3). 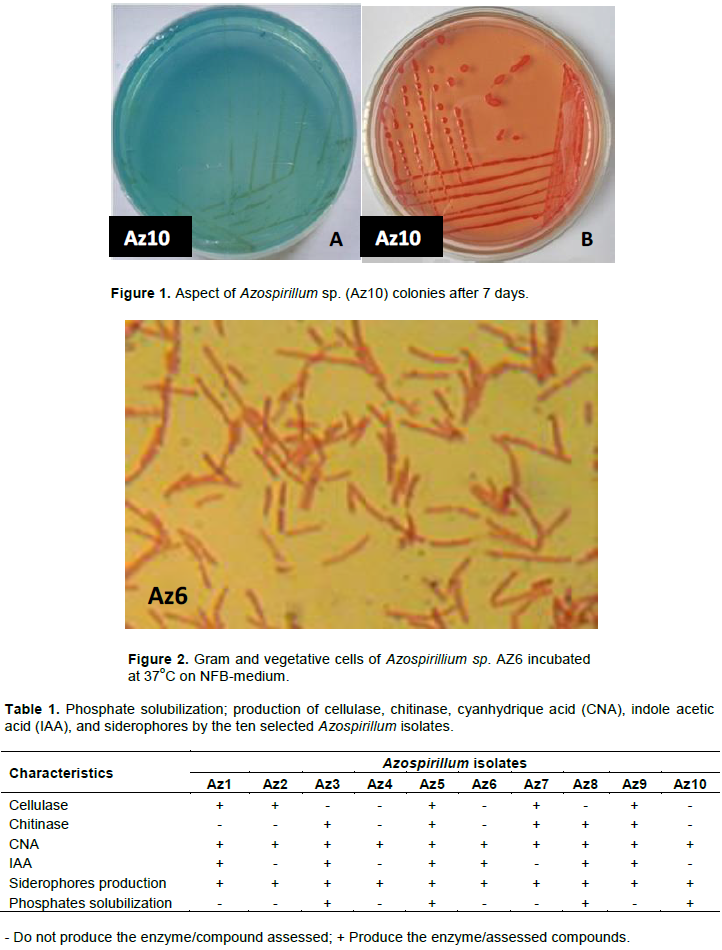 In this study, no bacterial isolate was obtained from bulk soil with few nutrients to support  high  quality  growth  of  microorganisms. In contrary, 10 bacteria were isolated from the rhizosphere and endosphere of maize grown at Samanko and the experimental plot of LaboREM-Biotech. These results are in conformity with those previously reported by Kabir et al. (1996) in Mali. According to New and   Kennedy   (1989),  wheat rhizosphere  provides  an ecological niche protected against soil acidity. These results suggest that plant rhizosphere offer a high quantity and diversity of nutrient for Azospirillum and a protective environment for a high-quality growth and activities. In fact, Wang et al. (2017) working on the effects of plant root exudates on the composition of the belowground microbiome, demonstrated that plant species and plant genotype were key factors driving the changes in the belowground bacterial community composition in agro ecosystems. Likewise, Brusamarello-Santos et al. (2017) suggesting to exploit the highly diverse maize genetic resources in terms of beneficial plant-bacterial interactions for optimizing maize growth, with reduced N fertilization inputs. In fact, Rilling et al. (2018) showed a compartmentalization between rhizosphere and root endosphere for both the abundance and diversity of total (16S rRNA) and putative N2-fixing bacterial communities on wheat plants, and Johnston-Monje et al. (2016) studying bacterial populations in juvenile maize rhizospheres originate from both seed and soil, concluded that the most common bacterial cells in juvenile maize rhizospheres are seed transmitted.
All the Azospirillum sp. strains isolated in this study produce siderophores and some of them produce indole acetic acid. Inoculation of these isolates significantly enhanced rice and maize seed germination as well as allowed healthy plants. In fact, Araújo et al. (2010) reported that faster germination reduces the period of heterotrophism and reduces the chances of attack by soil pathogens. Besides the production of phytohormones, all the isolated Azospirillum sp. strains produce siderophores, and some of them can produce cyanhydric acid and solubilize phosphorus as well as increase the plant height, the number of leaves, the stem diameter of rice and maize plants; and the number of grains and the total weight of maize grains. The results were also supported by the results of Isawa et al. (2010) and Bao et al. (2013), who reported a significant enhancement of rice growth in terms of tiller numbers, shoot length and shoot biomass consecutive to rice seed inoculation with Azospirillum B510, under greenhouse and field conditions. Pandiaranja and Govindara (2012) reported that the strains of Azospirillum help the plants for better growing by means of utilization of various parameters from the soil to the plants.
In this study, the application of 25% of the recommended dose of nitrogen after inoculation with the selected Azospirillum sp. strains tested decreased the number of maize grains by 45.34% and the total grains weight by 31.40%. In fact, Zeffa et al. (2018) reported no significant increase in grain yield when inoculation with bacteria from the Azospirillum genus was realized together with nitrogen fertilization, but did not observe a significant decrease in production. According to research results of Steenhoudt and Vanderleyden (2006), Nif gene is inactive in excess N2. These results indicate that addition   of  nitrogen  after  inoculation  with  Azospirillum strains is non-additive.

The authors appreciate USAID (through the PEER program), Marketplace (through Africa-Brazil) and the World Bank (through WAAPP2a) for the financial support of this study.