The current work aimed to use agro-industrial wastes as a strategy to obtain biosurfactant from a new Candida tropicalis UCP 1613 isolated from mangrove sediments of Rio Formoso, Pernambuco State, Brazil. The yeast was identified based on 18S rRNA sequencing method and blast homology search. The promising strain showed the ability to use an optimal composition of a cheap medium containing whey (3%), cassava wastewater (7%) and soybean post frying oil (10%) during 96h which reduced significantly the surface tension from 70 to 28.8 mN/m. The yield of the biosurfactant obtained was 4.9 g/L and the minimum value of critical micelle concentration was 1.5%. In addition, this was isolated and characterized as an anionic polymeric molecule, composed of proteins (51%), lipids (37%) and carbohydrates (11%), and confirmed by Fourier transform infrared spectroscopy (FTIR) analysis. Also, biosurfactant was capable in forming stable emulsions at different ranges of temperature, pH and salinity. Alternatively, the biosurfactant displayed no toxicity against the different vegetable evaluated seeds Brassica oleracea, Lactuca sativa L. and Solanum lycopersicum. The antimicrobial activity of this biosurfactant was verified showing the main efficacy against Gram-positive bacteria besides inhibiting the antifungal activity against the yeast tested. The results obtained suggest its potential application to pharmaceutical, as well as environmental area.

Nowadays the presence of surfactants in the daily activities of man makes life easier. These compounds are mainly obtained through chemical synthesis from  oil  and possess in their composition both hydrophilic and hydrophobic structural moieties. Thus, this duality gives them  the  ability  to  lower  the   surface   tension,  critical micelle concentration, and interfacial tension between liquid–liquid/liquid–solid systems (Marchant et al., 2012; Sharma et al., 2014). In contrast, biosurfactants are the main classes of natural surfactants produced by fungi, yeast and bacteria.
According to their chemical structures, they are grouped into five major classes of lipopeptides, glycolipids, phospholipids, neutral lipids, and polymeric compounds (Desai and Banat, 1997; Khopade et al., 2012). Microbial surfactants as also known, have numerous advantages when compared to their chemically synthesized counterparts due to their lower toxicity, higher biodegradability, and better environmental compatibility, ability to be synthesized from renewable resources, higher foaming, higher selectivity and specific activity at extreme temperature, pH and salinity (Zheng et al., 2012; Rufino et al., 2014). These properties confer them commercial importance evidenced through the biotechnological applications in pharmaceutical, biomedical, cosmetic, petroleum, and food industries (Nitschke and Costa, 2007; Banat et al., 2010).
However, the benefit of these molecules contrasts with its high costs of the production associated with inefficient methods of recovery turning with distant reality for industry (Makkar et al., 2011). In this context, biocircular economy brings an innovative approach as a demand for global sustainability. Thus, efforts toward the recovery and reuse of waste from agro industrial origin through bioprocesses allow in valorizing the microbial synthesis of biobased products as biosurfactants (Mohan et al., 2016).
In addition, other significant aspects to be explored are the absence of toxicity and antimicrobial activity. These properties are suitable for the biotechnological applications of biomolecules such as biosurfactants (Sobrinho et al., 2013). With this in mind, the present paper was focused on the characterization of the biosurfactant produced by Candida tropicalis UCP 1613 isolated from mangrove sediment in Northeast of Brazil. The biosurfactant was extracted and characterized through compositional analyze, ion charge and Fourier transform infrared spectroscopy (FTIR). The stability of the biosurfactant under different conditions of pH, temperature and salinity was also studied and verified as its efficacy in the phytotoxicity assay and antimicrobial activity.

Morphological and molecular identification of the yeast producer of biosurfactant isolated from mangrove sediment
According to morphological observations of strain, yeast showed a characteristic of cream, smooth, glossy colonies whereas microscopic analysis revealed cells with small and medium sized with budding and no filaments characteristic. These traits allow presumptively the classifying of the isolate as Candida sp. (Figure 1). 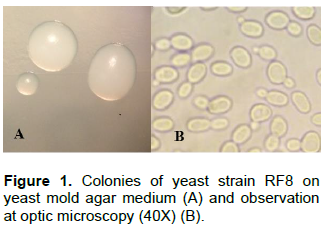 Additionally, the molecular analyses  of  the  sequences of ITS region were compared with the nucleotide database using the NCBI- blast tool. Candida sp. showed highest genetic agreement with C. tropicalis with a similarity of 99%. Thus the isolated was identified as C. tropicalis UCP 1613.
Kinetics of growth, biosurfactant production and biosurfactant yield
In this study, C. tropicalis UCP 1613 was cultivated in medium containing the agro-industrial substrates whey, cassava wastewater and soybean post frying oil during 96 h at 28°C. As shown in Figure 2, the growth of microorganism started rapidly after inoculation and remained increasing to 96 h of cultivation, when biomass reached 7.7 g/L. The surface tension dropped rapidly from 70 to 32.9 mN/m in the first 24 h and continued decreasing to 28.5 mN/m at 48 h of growth, indicating excellent surface-active properties.

Biosurfactant production started in the early stages of the exponential growth phase, simultaneously to the surface tension reduction which increased significantly until the end of cultivation, which attained the maximum biomass yield. The yield of the crude biosurfactant produced by C. tropicalis UCP 1613 was 4.9 g/L after 96 h of cultivation in medium containing 3% whey, 7% cassava wastewater and 10% soybean post frying oil (Figure 3). 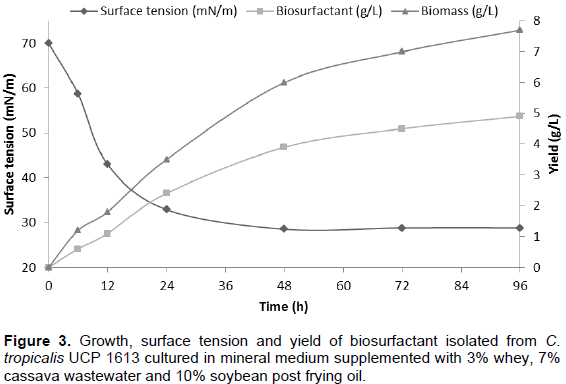 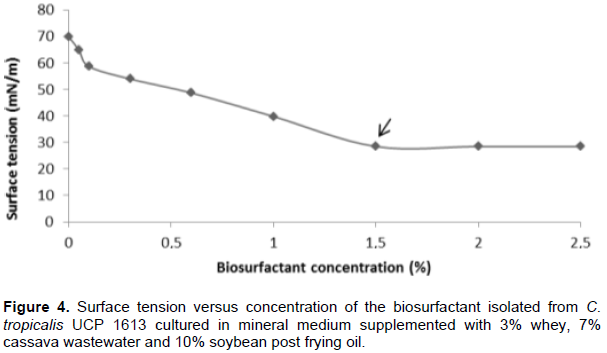 Preliminary characterization of biosurfactant
The determination of biochemical composition of the biosurfactant analyzed revealed the presence of 51% proteins, 37% lipids and 11% carbohydrates, suggesting its polymeric nature. Furthermore, an anionic profile with −57.4 ZPmv, 3, 4 μS/cm at 25.3°C was detected. In addition, the FTIR analysis was also used as complementary in this study.
According to the spectrum showed in Figure 4, stretching bonds of functional groups N–H between 3,514-3,257cm-1 indicated the presence of a peptide component. Also, a complex sequence of peaks due to the stretching vibration mainly C-C and C-O-P of oligo and polysaccharides (starches) were detected at an interval  of  1200   to   1000  cm-1.  In  addition, functional groups -CH=CH2 and CH3 were identified at 1448.27 cm-1 corresponding to fatty acids (Figure 5). Bands at approximately 1756.31 cm-1 showed the presence C=O consistent with ester functional group in lipids (Verma et al., 2015). 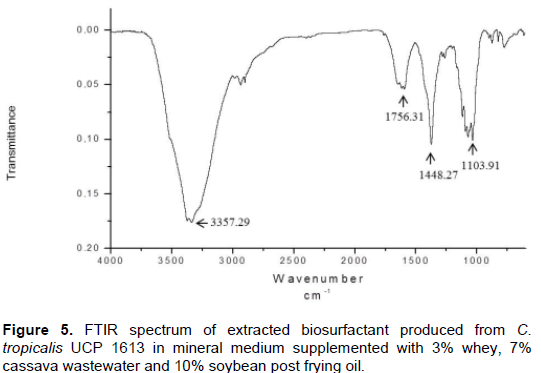 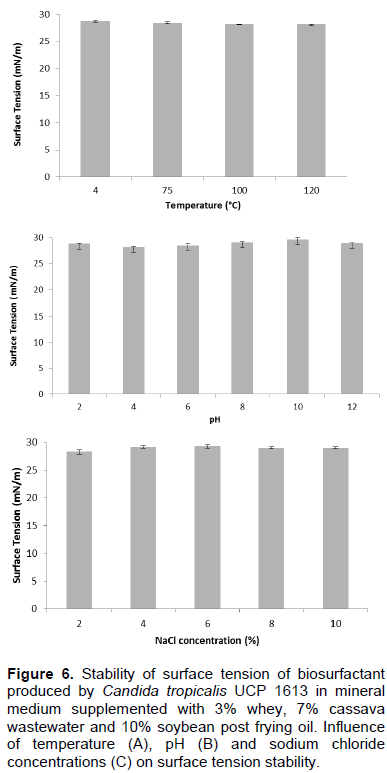 Biosurfactant phytotoxicity
The phytotoxicity effect was evaluated through the germination index (GI) which combines measures of relative seed germination and relative root elongation. Seeds of vegetables Brassica oleracea, Lactuca sativa L. and Solanum gilo were used with different concentrations of the biosurfactant isolated from C. tropicalis UCP 1613.
In this regard, the Table 1 which displays that this metabolite did not show a phytotoxic effect against seeds tested. Also, it was interesting, the proportional relation was observed between the different germination index (GI) and the concentrations of biosurfactant. 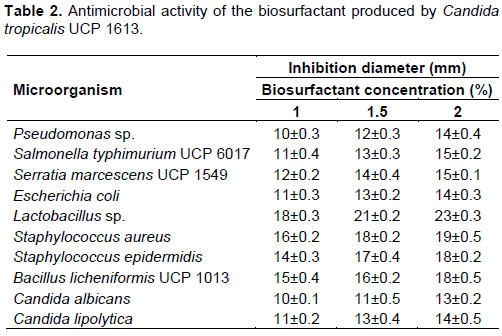 In the present study with the new yeast isolated from mangrove, sediments were identified as C. tropicalis UCP 1613. The optimal carbon and nitrogen sources was a combination of whey (3%), cassava wastewater (7%) and soybean post frying oil (10%) resulting significantly reduction of the surface tension.
The biosurfactant produced was non-cytotoxic which showed stable surface tension to high temperature, acid to alkaline pH, and all concentrations of electrolyte (up to 12%). Besides, the new biosurfactant is characterized as anionic and polymeric molecule. The tension-active molecule showed properties to effective antimicrobial activity, Gram-positive and negative bacteria, and yeasts. This study strongly suggested the biosurfactant produced by C. tropicalis UCP 1613 which play a promising role in biomedical application due to its non-toxicity, stability and higher antimicrobial activity. The use of renewable resources as agro-industrial waste from circular bio-economy approach allowed the obtaining of biosurfactant as a value added product.

The authors declared no conflict of interest.