In this study, the infection of young children with Mycobacterium tuberculosis and drug-resistant M. tuberculosis in a mass gathering area in Al-Madinah Al-Munawwarah, was investigated and discussed. All the children, 15 years old and younger, who were referred to the central tuberculosis laboratory in Al-Madinah between January 2012 and December 2014 were included in this study. Among a total of 622 registered new cases, 68 (10.9%) were children, males were 40 (58.8%) while 28 (41.2 %) were females. All the children were vaccinated with Bacillus Calmette-Guérin (BCG) within their first week of birth. Sixty (88.2%) children were infected with M. tuberculosis, whereas 8 (11.8%) had non tuberculous mycobacteria (NTM). Clinically, pulmonary tuberculosis was confirmed in 20 (29.4%) cases, whereas the remaining 48 (70.6%) had extra pulmonary tuberculosis. Multidrug-resistant M. tuberculosis (MDR) was isolated from 3 (4.4%) cases, all of whom were younger than five years; one with pulmonary and two with extrapulmonary tuberculosis. All the isolated MDR organisms belonged to the M. tuberculosis complex. The rates of mono-resistance to isoniazid (H), streptomycin (S), ethambutol (E) and pyrazinamide (Z) were 5.9, 1.5, 5.9 and 8.8%, respectively. No case was registered as mono-resistant to rifampin (R). The prevalence of childhood tuberculosis in the current study area is higher than the globally estimated rate. Since all the cases were new, MDR-TB was mostly due to infection with originally MDR strains.

Tuberculosis represents the leading cause of death from a single infectious agent, ranking above HIV/AIDS. Moreover, it is the ninth leading cause of death worldwide. According to the  WHO,  10.4  million  cases  of  TB  were present in 2016; an estimated 1.3 million deaths occurred amongst HIV-negative patients, and an additional 0.374 million deaths occurred amongst HIV-ositive patients (WHO,  2017).  Most  cases  (90%) were adults, and 65%
were males. Regarding drug resistance, 0.6 million new cases with resistance to rifampicin (RRTB) were registered in 2016, of which 0.49 includedmultidrug-resistant TB (MDR-TB) (WHO, 2017).
The prevalence of tuberculosis amongst children is always underestimated (Starke, 2002) because of several factors, the most important of which is difficulty in diagnosis (Hailu et al., 2014). Children are not usually considered a significant source of disease transmission; thus, they are neglected by national control programmes (Marais and Pai, 2007).
Multidrug-resistant tuberculosis is defined as TB caused by Mycobacterium tuberculosis which is resistant to both rifampicin and isoniazid (WHO, 2008). According to the WHO, the rate of MDR-TB is increasing; because children represent 20% of TB-infected population in high-burden countries (Marais et al., 2006a). It is likely that the prevalence of MDR-TB amongst children is also increasing. The most probable source of infection amongst children is their household contacts; however, routine investigations during surveillance in areas with low resources and high burden of tuberculosis are rare (Hill and Ota, 2010; Hwang et al., 2011). The transmission of drug resistant bacilli from close contact is also a key explanation of MDR-TB in children (Shah and Chilkar, 2012).
The diagnosis of paediatric TB is difficult with regard to microbiological tools because this disease can only be detected in approximately 2 to 40% of all radiologically confirmed pulmonary TB cases (Zar et al., 2005), and it rarely increases above 50% unless extensive disease is present (Marais et al., 2006b); therefore, the treatment of children is usually based on symptoms and radiology, presuming drug-susceptibility (WHO, 2006). In general, physicians do not employ treatment options for MDR-TB without confirmation via microbiological tools because of the prolonged treatment duration and the adverse effect of drugs that might require hospitalisation.
Recent reports regarding the prevalence and incidence of TB in the Kingdom of Saudi Arabia (KSA) have shown variable rates in different regions of the country (8.5 to 23.1%) amongst Saudi nationals; however, the percent has increased in the Makkah region (38%) amongst non-Saudis (Abouzeid et al., 2012; Gleason et al., 2012). Improvements in healthcare have reduced the incidence of TB; however, its prevalence remains high primarily because of the large populations generated by the Hajj and Omarah events (Shibl et al., 2013).
Regarding MDR in KSA, the 2013 WHO estimates revealed previously treated and new case rates of 5.5 and 0.51%, respectively. Several studies conducted throughout KSA showed 14-20% resistance rates to first-line drugs and 1-44% resistance rates to MDR-TB (Al-Rubaish et al., 2001; Abu-Amero, 2002; Al-Hajoj et al., 2007). This study aimed to investigate the prevalence of tuberculosis and MDR Mycobacterium tuberculosis among children in Al-Madinah Al-Monawwarah, KSA.

Study type, population and sampling
This study included all newly confirmed tuberculosis patients of age 15 years and below (n = 68/622; 10.9%), who were referred to the central tuberculosis laboratory in Al-Madinah Al-Munawwarah between January 2012 and December 2014. Informed consent documents were offered to their parents. Basic demographic data were collected.
Sputum specimens were collected from some of the pulmonary tuberculosis enrolled patients and processed using standard procedures. In patients with extrapulmonary tuberculosis, fine needle aspirates were collected; in other cases, gastric lavage samples were collected from infants.
Isolation and identification of mycobacterium
Ziehl-Neelsen stain (ZN)
ZN staining was performed on all collected specimens using standard measures. Following absolute alcohol fixation, carbolfuchsin was poured over a smear and heated gently until boiling for 5 min and then washed off with water. Then, 20% sulphuric acid was added, left for one min and washed off with water. Methylene blue was added for two min, and the sample was again washed with water. Finally, the slides were allowed to air dry, and they were examined under an oil immersion lens (Olympus, Japan) for acid fast bacilli.
Drug-susceptibility testing via BACTEC MGIT 960
Specimens from the 68 patients were cultured in a Mycobacteria Growth Indicator Tube (MGIT) 960 system (Becton Dickinson Microbiology System, USA). The cultures were further investigated for susceptibility to anti-tuberculosis drugs as directed by the manufacturer using an M960 system. The final drug concentrations used for drug susceptibility testing (DST) were E, 5.0 mg/ml; S, 0.1 mg/ml; R, 1.0 mg/ml; H, 0.1 mg/ml; and Z, 25 mg/ml. For each isolate, a growth tube (a growth supplement without a drug) was included as a control to determine the relative growth ratio, and the M960 system was used to report the results of the DST.
GenXpert MTB/RIF assay
An MTB/RIF assay was conducted according to Blakemore et al. (2010) by using GeneXpert (Cepheid, Sunnyvale, CA). Briefly, three volumes of sample reagent were added to one volume of sample, and the container was shaken and kept at room temperature for 15 min. Then, 2 ml of the mixture was transferred to the test cartridge. Samples with suspicious results (those that differed in culture from those in GenXpert or vice versa) were re-checked.
GenXpert negative samples were subjected to further identification using conventional methods including ZN staining, and the follow-up cultures were created on Lowenstein Jensen (LJ) medium to identify NTM (Gangadharam, 1996).
Data analysis
The Statistical Package for Social Sciences (SPSS), version 21.0 (SPSS Inc., Chicago, IL, USA, 2012), was used for all data analyses. A two-tailed P-value of < 0.05 was considered as significant.

Epidemiological findings and risk factors
Between January 2012 and December 2014, 68 children (<15 years old) of 622 cases (10.9%) referred to the tuberculosis reference laboratory in Al-Madinah Al-Munawwarah were enrolled in this study. All cases were confirmed and registered as new, and all received a postnatal BCG vaccination. Regarding nationality, 64 (94.1%) of the patients were Saudis, whereas only 4 (5.9%) were foreign nationals.
This study included 40 males and 28 females, with a male/female ratio of 1.4:1. Despite the lower number of females as compared to males, this difference was not significant. The sample was divided into 3 age groups: 25 (36.8%) infants ≤ 1 year old, 17 (25%) 2- to 5-year-old and 26 (38.2 %) 6- to 15-year-old patients.
Diagnosis was conducted via ZN smear, culture and PCR.  Table   1   shows   the   demographic   data  of  the patients and the smear results, whereas Figure 1 shows the results of the different methods used for diagnosis.
Isolation and identification of M. tuberculosis
Positive ZN smears were recorded in 24 (35.3%) cases, with a sensitivity that was significantly lower than the culture (P < 0.001). All the cultures tested positive, and 8 of the cultured isolates (11.8%) were rapid growers and tested negative in PCR (GenXpert). The cultures were identified with the aid of biochemical reactions as nontuberculous mycobacteria (NTM) (Table 2) and the remaining 60 (88.2%) were labelled M. tuberculosis. 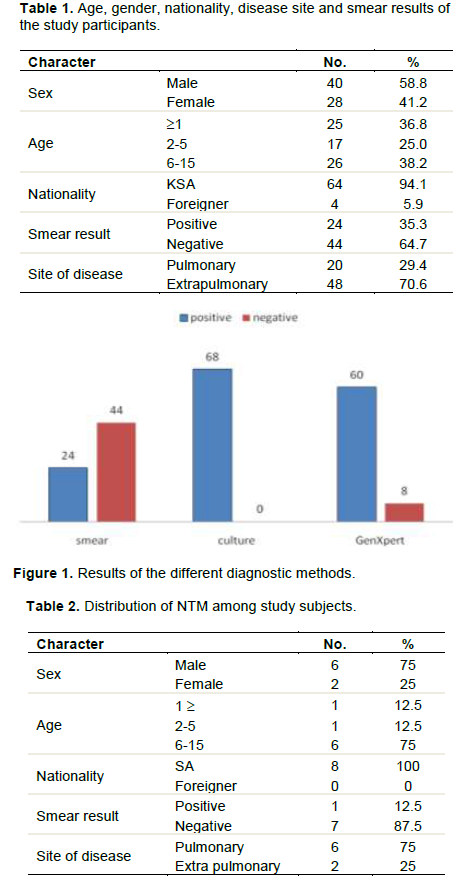 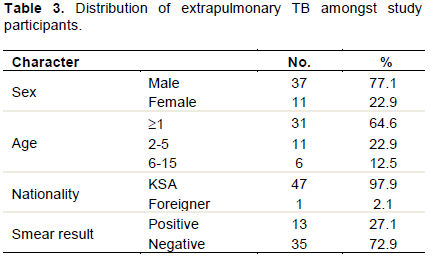 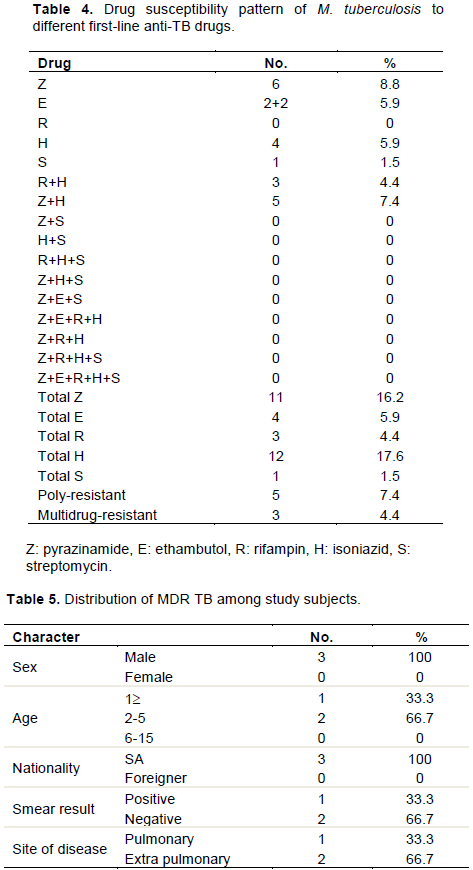 Drug resistance can be attributed to several factors including genetic mutations, inadequate treatment, past treatment (Shah and Rahangdale, 2011) or the transmission of drug-resistant strains from close contact (Shah and Chilkar, 2012). Since all the participants were new cases in this study, approximately two-thirds were less than 5 years old, and 94% were Saudi nationals (that is, non-immigrants from countries with high TB burdens), the most likely source of infection is close contact. Hence, case finding and household contact screening might provide an effective control measure for limiting paediatric TB and paediatric MDR-TB in this area.