The seasonal snowpack of the temperate glaciers are sources of diverse microbial inoculi. However, the microbial ecology of the tropical glacial surfaces is endangered, hence poses an extinction threat to some populations of some microbes due to rapid loss of the glacier mass. The aim of this study was to isolate and phylogenetically characterise the prokaryotes from the seasonal snow of Lewis glacier in Mt. Kenya. Snow samples were inoculated into Difco™ R2A Agar and BG-11 medium. Genomic DNA of seventeen representative axenic isolates was extracted using the mixture of MP FastDNA soil kit and the 16S rDNA gene region partially sequenced. The 16S rDNA gene sequences were blastn analyzed against the Genbank database and phylogenetic analysis was performed using MEGA 6 software. Phylogenetic analysis grouped the isolates into three phyla: Firmicutes, Proteobacteria and Actinobacteria. Isolates were affiliated with the genera Bacillus (53%), Stenotrophomonas (23.4%), Cryobacterium (5.9%), Paenibacillus (5.9%), Subtercola (5.9%) and Arthrobacter (5.9%). The results confirm that the seasonal tropical snowpack of Lewis glacier is dominated by the general terrestrial prokaryotes and a few glacier and snow specialist species.

Cold-adapted regions, ice cores from Polar Regions and glaciers from mid-latitude and high-latitude mountains are known to harbour diverse and active microbial community structures (Palmisano and Sullivan, 1983; Grebmeier and Barry, 1991; Skidmore et al., 2005). Ice cores are important for dating past microbiological diversity such as the bacteria, fungi and algae that are present in ice cores from polar ice sheets and mountain glaciers (Christner et al., 2003; Miteva et al., 2009).

Temperate glaciers are characterised with the seasonal snow cover that harbours phytoflagellates, mostly the micro-algae (Anesio and Laybourn-Parry, 2012). Snow-packs are good sources of microbial inoculi (Hallbeck, 2009), nutrients (Schmidt and Lipson, 2004), and water (Barnett et al., 2005) that cascades through the drainage tills forming the melt water at the subglacial ecosystems. The availability of the inorganic nitrogen and phosphate compounds (Uetake et al., 2010) on glacier environments are controlled by the phototrophic activity of the snow algae and the snow-pack Cyanobacteria (Hodson et al., 2008). 16S rRNA gene sequencing has also revealed the availability of Proteobacteria, Firmicutes and Actinobacteria that are able to degrade organic com-pounds such as the propionate, acetate and formate that are available on the Arctic snow (Hodson et al., 2008).

The diversity and ecology of the prokaryotes in the snowpack from the rapidly disappearing tropical African glaciers, Mt. Kilimanjaro, 5895 m, Mt. Rwenzori, 5109 m and Mt. Kenya, 5199 m is not yet studied. In this study, the phylogenetic diversity of prokaryotes in the snowpack from Lewis glacier in Mt. Kenya was determined using culture based approach. Lewis glacier on Mt. Kenya is the smallest (0.4 km2 in 1993) in Africa (Kaser, 1999) and biggest glacier on Mt. Kenya (Lewis Glacier) that is rapidly shrinking (Prinz et al., 2011). The study revealed that the snowpack of the rapidly disappearing Lewis glacier is dominated by the Firmicutes, Genus Bacillus. This is the first report to explain the availability of the prokaryotes from the psychrophilic ecosystems in the African continent.

Isolation and purification of isolates

Pure isolates were used for the extraction of the gDNA. A colony was picked from plates of fresh cultured isolates using a sterile wire-loop and directly added to a mixture of MP FastDNA soil kit according to the manufacturer’s protocol. Purified DNA was quantified photometrically (NanoDrop; Thermo Fisher Scientific, Germany) and used as a template for amplification of 16S rRNA genes using the general bacterial primer pair 27F [5’-AGAGTTTGATCCTGGCTCAG-3’] and 1492R [5’-GGTTACCTTGTTACGACTT-3’] (Lane, 1991). PCR amplification was performed using TaKaRa Ex Taq DNA polymerase (Takara, Shiga,Japan). For each PCR, 1 µl (25 ng/µl) of the template was mixed with TaKaRa Ex Taq™ HS (5 units/µl) according to the manufacturer’s protocol. The PCR conditions were as described by Mackenzie et al. (2007) except the final extension which was at 72°C for 8 min. PCR product size was checked using a 1% agarose gel stained with ethidium bromide. The amplicons were gel purified using Macherey-Nagel NucleoSpin extract II kit as per the manufacturer’s protocol and eluted in 30 µl of TE Buffer (5 mM, pH 8.0).

Polymerase chain reaction (PCR) products were sequenced with a 3130xl Genetic Analyzer (Applied Biosys-tems, California) at the National Institute of Polar Research (NIPR, Japan). Sequences of the isolates were manually edited in chromas and checked for presence of artifacts or chimeric structures using the Mallard software (Ashelford et al., 2006). A search for similar sequences using BLASTN program was performed, and sequence alignment was performed using the CLUSTAL Omega program (http://www.clustal.org). A neighbor-joining tree of the aligned sequences was constructed using MEGA V6 (Tamura et al., 2011). Evolutionary distances were computed using the Maximum Composite Likelihood method (Tamura et al., 2004). To obtain support values for the branches, bootstrapping (Felsenstein, 1985) was conducted with 1000 replicates. All sites, including gaps in the sequence alignment, were excluded pair-wise in the phylogenetic analysis. Using the resultant neighbor-joining tree, each isolate was assigned to the proper taxonomic group. The taxonomic assignment was conï¬rmed at a 90% conï¬dence level using the naïve Bayesian rRNA classiï¬er on the RDP website (Cole et al., 2013). All sequences were deposited in GenBank nucleotide database with the accession numbers MH329929 to MH329948.

Affiliation of 16S rRNA gene sequences of the isolates

A total of 17 representative isolates from snowpack  were selected from the axenic colonies for phylogenetic analyses. The isolates (prefixed as Lewis Bac with their accession numbers in parenthesis) in the inferred phylogenetic tree were phylogenetically diverse and affiliated with known members from different phyla including Firmicutes, Proteobacteria, and Actinobacteria (Table 1 and Figure 1). 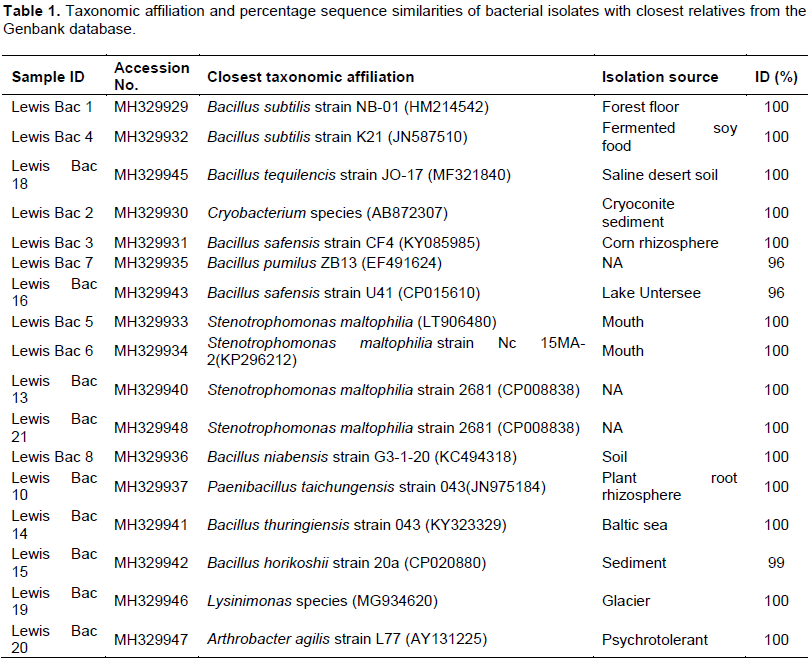 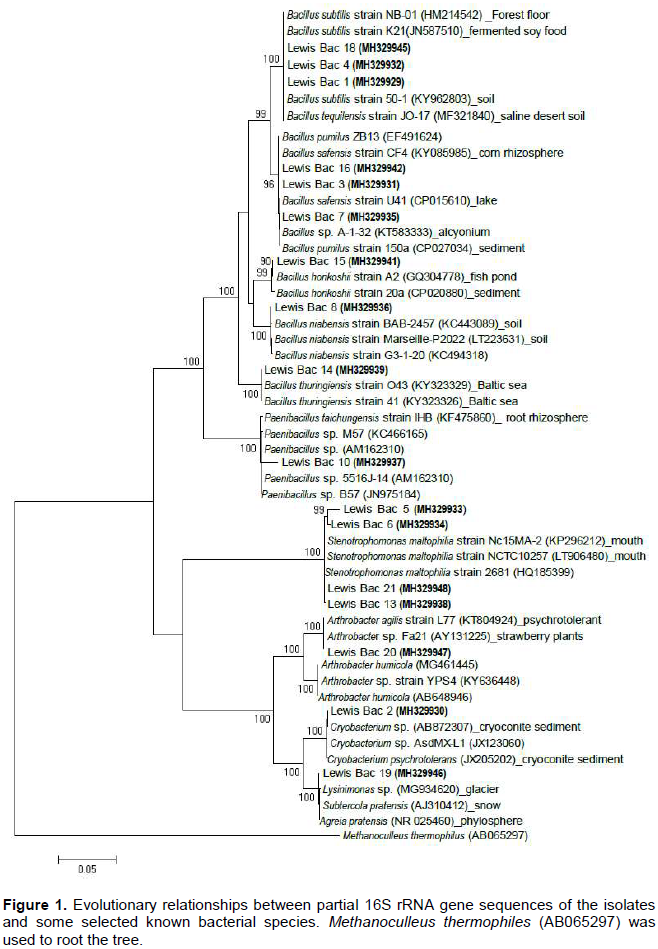 The phylogenetic tree formed two major clusters described by the possible sources of the isolates. Snow or the psychrotolerants together formed a single sub-cluster supported with a bootstrap value of 100% (Figure 1). The terrestrial and aquatic isolates were also clustered together with sub-clusters describing sub-species and strains of various genera (Figure 1).  Lewis Bac 5, 6, 13 and 21 were clustered together with the known genus Stenotrophomonas.

Snowpack of Lewis glacier is a rich psychrophilic ecosystem that is conducive for the microbial inoculi. The snow cover of Lewis is, however, experiencing the downwind bio-aerosol input from the surrounding tall rocky points, moraine, terrestrial, human activity and savannah forests from Laikipia county. In this study, the isolates were partially identified to be closely related to the human gut pathogens, terrestrial and psychrophilic microbial ecology. The molecular analyses of 16S rRNA gene sequences revealed three phyla, Firmucutes, Proteobacteria, and Actinobacteria as the colonies on the Lewis glacier snowpack. The presence of the three phyla Firmicutes, Proteobacteria, and Actinobacteria on the snowpack would be an indication of active degradation of organic compounds from the glacier surface as compared to their known features on glaciers elsewhere (Hodson et al., 2008). The occurrence of these phyla is also characterized with the balance of nutrient cycling between the atmosphere and glacier surface. Elsewhere, Jones (1999), Hodson et al. (2005) and Hodson et al. (2008) have shown that nitrogen cycling is important to the melting polar glaciers, but it would be much faster in the tropical glaciers, which are actively exposed to photosynthetic and heterotrophic processes in addition to other biogeochemical processes due to available litter and bio-aerosols influxes. However, the biogeochemical role of snowpack biota in nutrient cycling is not well understood.

The succession process of the rapidly disappearing Lewis glacier also contributes to the litter input on the snowpack. The genus Bacillus was the most dominant group on the glacier snowpack with a percentage of 53%. This can be explained by the strategic location of the glacier site to the windward and leeward sides where it experiences the upwind predominant weather systems from Indian ocean and downwind influxes from the savannah zones on Nanyuki, respectively. The exposure of the glacier surface to continuous leeward dust flow makes it a recipient settling zone for the contaminating terrestrial bio-aerosols. Most of the analyzed isolates (12; 53%) are soil and plant root rhizosphere symbionts, while 4 (23.5%) are closely related to human gut pathogens. Probably, the symbionts would be easily blown by the downwind from the savannah zones and oceanic upwind from the glacier foreland, which is colonized by the vascular plants (Schutte et al., 2009; Davey et al., 2015) onto the snowpack that acts as a settling point for litters and bio-aerosols. Moreover, soil inoculants would arise from the glacier terminal moraine that is re-colonized by the snow generalist phyla. The phylum Proteobacteria is a snow generalized colony, which is known to play a significant role in the rock mineralization at the glacier foreland (Yoshitake et al., 2010) that extends to the moraine ecosystem.

Isolates Lewis Bac 5, 6, 13 and 21 were identical to known members of the human pathogen (genus Stenotrophomonas) indicating that human activities on the glacier and also the surrounding influxes are possible sources. Stenotrophomonas maltophilia is ubiquitous in aqueous environments, soil, and plants (Berg et al., 1996, 1999), which are great sources to possible contaminant on the Lewis glacier snowpack. They are also known to be useful in wide range of biotechnology applications (Bhattacharya et al., 2007; Ryan et al., 2008). However, their occurrence in cryophilic environment is a rear finding that is reported for the first time from the tropical glacier.

In this study, only three snow specialist species (17.6%; isolates Lewis Bac 2, 19 and 20) were partially identified out of the 17 isolates. These three isolates were closely related to known groups of glacier specialist species of the genera Cryobacterium, Subtercola/Agreia and Arthrobacter (Figure 1) that have only been published from the mid-latitude to polar regions (Hodson et al., 2008). The genus Cryobacterium is psychrophilic (Suzuki et al., 1997; Zhang et al., 2007). Cryobacterium psychrotolerans is aerobic bacterium isolated from the China No. 1 glacier. They grow well between 4 and 27°C with an optimum growth at 20 to 22°C (Zhang et al., 2007). These conditions can as well be inhabited in the tropical Lewis glacier, which seems to have a constant temperature conditions. Arthrobacter agilis is a psychrotrophic bacterium, which occurs in lake water and Antarctic sea ice (Bowman et al., 1997; Deming, 2002). It produces dimethylhexadecylamine, plant growth promoting enzymes and cold  active  hydrolytic  enzymes  (Nadeem et al., 2013). These elements would be useful for the species competence, degradation of bioactive elements and cold shock stability within the tropical glacier ecosystem. Due to the seasonal snow fall on Lewis glacier and rapid melt of the englacial and subglacial zones of Lewis glacier (Hastenrath, 1983, 2006; Prinz et al., 2011), these psychrophilic prokaryotes are endangered and can be easily lost through the glacial surface run off and melt water tillage to the glacier bed and melting points.

Generally, the stability of microbial interactions on the snowpack is complexed with the climate change, duration of snow melt and rainfall (Hodson et al., 2008). However, the snowpack layer of Lewis glacier is relatively thin and has shorter melting durations, most likely due to the location of the glacier closer to the equator with a constant temperature. It means that the phototrophs are not affected by the snow flurries and their interactions with the snow heterotrophs have impact on the glacial interface microbial community structures, which may facilitate the rate of biogeochemical processes leading to rapid glacier melt. Lewis glacier snowpack is not colonized by the phototrophic prokaryotes as usual to other glaciers worldwide (Stanier and Bazine, 1977; Harding et al., 2011). This might be due to the seasonal snow fall characteristic of the Lewis snow cover, which is coupled with the influx of the bio-aerosols. The phototrophic prokaryotes might be colonizing the submerged cryoconite holes on the Lewis glacier surface, but not on the snowpack.

The findings in this study suggest that the snowpack of the tropical Lewis glacier is colonized by diverse prokaryotes, including those of clinical and biotechnological significance. Only a few of the isolates were cryophilic that might be endangered by the rapid loss of the glacier. A number of isolates from the snowpack are, however, the general colonizers that are blown in by the downward and upward wind from the surrounding terrestrial, moraine, savannah ecosystems and the predominant oceanic weather system.