Biofilms are complex aggregations of microorganisms formed in any situation where there is contact with superfaces solids, liquids or gases. This study aims to map the international scientific literature on the formation, bacterial adhesion, prevention and treatment of oral biofilms. There were 921 published articles in 274 different journals indexed in the Web of Science, in the 1991-2015 year period. These articles were written by 2804 authors linked to 695 institutions in 59 countries, notably the United States and the United Kingdom. The 17 articles of greater impact were published in the 1995-2009 year period. The relationship between the most important articles shows that the issue is addressed in a broad and diversified approach, points out to a range of possibilities for prevention and treatment, and uses of experimental methods that list mechanisms and combinations able to enter the structure of the biofilm, elucidate the formation process, to bacterial adhesion and to reduce pathogenic bacterial activity and, in some cases, destroying their structure. The descriptive analysis of the main work has shown potential for the development of the area and contributions to improve the prevention and treatment of oral biofilms.

Biofilms are complex aggregations of microorganisms and are formed in situations where there is contact of solids superfaces with liquids or gases. In infectious processes, the bacterials may be present in two ways: as free-living or
sessile cells. This second stage of life of the bacteria is seen in microscopic and biological systems with high level of organization called biofilms. These micro-ecosystem, may comprise one or more  species  of bacteria producing films that are deposited and fixate on biotic and abiotic surfaces, forming organized and functional aggregates, allowing a strong adhesion and constitute a defensive mechanism facing hostile environments (Elias and Banin, 2012; Li and Tian, 2012).
The biofilm allows adhesion of bacterial cells to an abiotic surface very quickly, and has been found that an affinity between the organic material and polymeric and hydrophobic surfaces. In the biotic surfaces, adhesion occurs more slowly, mediated by specific processes. The organic matrix, organized in layers produced by these bacteria and gives them greater resistance to anti-microbials, make it difficult to eradicate the source of infection. Several features have been identified as responsible for tolerance to antimicrobials: the protection of proteins and compression of the matrix, low metabolism, resistance genes transfer between species and failure to recognize these structures by the immune system. Another factor considered of impact in this phenomenon is the indiscriminate use of antibiotics, which induce bacterial resistance, increasing the concentrations necessary for combating these micro-organisms and widening the search for new drugs (Preedy et al., 2014; Krasowska and Sigler, 2014;  Patel et al., 2015)
The biofilm formation does not occur randomly. The construction of this structure and dispersion of this system are regulated by quorum-sensing, communication between cells dependent on population density. Microorganisms disperse signaling molecules and detect the amount of other microorganisms near them. They are also sensitive to external factors and alter the signaling based on them. Then, there is a communication between species allowing formation of associations and more resistant biofilms (Popat et al., 2012).
Dental plaque or oral biofilm, is a complex biofilm that may be accumulated on the tooth surface or gum and is directly related to periodontal disease and tooth decay (Simoes et al., 2009). For the other hand, the the bibliometric research is a quantitative and statistical technique that concentrates its efforts on visible indicators and academic activity goals, usually of publications and citations (Cronin, 2001). The relevance of bibliometric analysis as a technique for data collection and analysis have been confirmed as one of the argumentative sources in the search for investment resources in research, in academic rankings (Diem and Wolter, 2013; Miguel and Dimitri, 2013). Considering the relevance of bacterial association and formation of oral biofilms and their role in cariogenic and periodontal diseases, this study aimed to map the international scientific literature on the formation, bacterial adhesion, prevention and treatment of oral biofilms.

To carry  out  a   bibliometric   study,   important   selection   of   the database, keeping compatibility of this choice with the research objectives and the achievement of results was done (Koskinen et al., 2008).
It was specified as database ISI Web of Knowledge/Web of Science for its academic recognition to be considered one of the most comprehensive regular basis covering various areas of scientific knowledge (Santos et al., 2011). The steps for the analysis of selected studies followed the three suggested procedures: the definition of the database and the criteria to be used for the collection; data collection; and the representation and data analysis (Santos et al., 2014).
To collect data, the database of the Web ScienceTM  was used in time range of 1945 to 2015, to allow replication or update this study without the need to carry it again from its beginning. The following search terms were defined: "dental plaque*" and "biofilm*". The quotation marks indicate the exact representation of terms with more than one word and asterisks, the descriptors plural possibilities. These three terms represent the intended association in compliance with the purpose of the study. The data was collected from the search of these terms in the "topic" which is the title of articles, abstracts, keywords, author and keywords created (keywords plus). The results showed the first publication record in 1991.
After the search, there were identified 921 records publications, which were used as set searches for bibliometric analysis proposed in this study. There was no refinement filter to areas of knowledge, countries or languages of the studies, including all records of publications that had the three terms in association.
Later, data collection was performed for the analysis of the material from the export of this data to the bibliometric analysis software package HistCiteTM in order to organize information and facilitate analysis. The trajectory of annual evolution of publications; Periodicals with higher records; the authors with the highest number of publications; the number of articles distributed by country of origin of the authors; the more articles cited in Web of Science (global) and those most cited in the set of selected items (local), were analyzed. In addition, to these data generated by the software were identified general aspects of the texts of the 17 articles that compose the two groups: (a) items that received more citations from other papers throughout the database ISI Web of ScienceTM (GCS) and (B) articles that received more citations of the works in the selection group this bibliometric study (LCS).

921 publications records on formation, bacterial adhesion, prevention and treatment of oral biofilm in the main collection of Web ScienceTM were identified. These articles were published in 274 different journals indexed to the database and were written by 2804 authors with associations to 695 institutions in 59 countries. To achieve these items, 22,238 references, with an average of approximately 24 references per article were used as demonstrated in Table 1.

The first publication record, dating from 1991 shows experiments that studied factors that influence the capacity for microbial colonization and interactions in biofilms under controlled conditions (Donoghue and Perrons, 1991). The apex of the number of publications was reached in 2015, indicating a growing trend in the interest in this subject, in addition to timeliness and relevance of the subject. The growth percentage of publications in the  period  1991-2015  was  8.900%.
bacteria producing films that are deposited and fixate on biotic and abiotic surfaces, forming organized and functional aggregates, allowing a strong adhesion and constitute a defensive mechanism facing hostile environments (Elias and Banin, 2012; Li and Tian, 2012). Evolution of the number of publications distributed by years of the records can be seen in Figure 1. 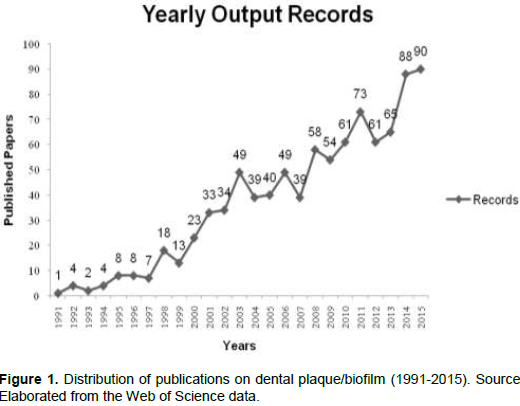 The total quantitative of publications was organized by the corresponding periodic conform in Table 2. The journals with the largest number of published records are the "Archives of oral biology" and "Caries Research", both with 43 articles. However, to identify those journals with the highest impact, was defined an index by dividing the number of citations by the number of published papers, presenting the "Journal of Bacteriology" as the one with the highest rate (79.6). This information become relevant for researchers and research centers to map the academic journals that publish most in the thematic and receive more citations from other studies.

The authors with the highest number of publications were presented in Table 3. Among the 2804 authors identified in the study, Table 3 shows the ten with the highest number of publications. The first is Michael Wilson, a researcher at the post-graduate school in dentistry in Europe, where he also works with Jonathan Pratten. The observation of Table 3 allows the identification of at least three major research centers in the area, "UCL Eastman Dental Institute – United Kingdom," the "University of Otago Wellington – New Zealand" and the "University of Maryland – United States of America", all research centers with a minimum of two researchers and more than forty records of publications. Furthermore, the specific situation in the area of knowledge of dental studies localizes the results in a perspective that corroborates with the initial interest in this study, The quantity of articles by country of origin of the membership of the authors is presented in Table 4. 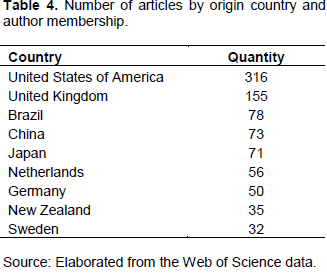 Table 4 indicates the countries of work memberships, with predominance in studies of American origin, followed by the UK and Brazil. It is important to note that the results coincide with the list of authors with most publications only to the first two countries, as Brazil is not in the list shown in Table 3. This may be due to the fact that Brazilian works are more decentralized in authoring or not have specialized centers on the field, despite the amount of individual records.
To analysis the relationship between the most cited articles, the records were separated into two groups: (a) items that received more citations from other papers throughout the database ISI Web of ScienceTM (GCS) and (b) articles that received more citations of the works in the selection group in this bibliometric study (LCS). The number of citations and citation relations between these works (represented by lines connecting the circles) indicate the most representative studies on the subject, presenting seminal works and those that later were also very cited (Figure 2).
By observing the relationship between the texts, entitled figures can be identified "authority article "or "base article" (Santos et al., 2014), which are those main references of others who receive large amounts of citations. Are they: Kolenbrander (2000), Loo et al. (2000) and Wood et al. (2000). In addition, the "hub articles" or "Connecion articles", which are those that condense important information from previous work by connecting these to other more recent, also receiving large amounts of citations (Santos et al., 2014), They are: Li et al. (2001), Kolenbrander et al. (2002) and Marsh (2004). Older articles of the relationship shown in Figure 1 are: Marsh and Bradshaw (1995) and Quirynen and Bollen (1995). 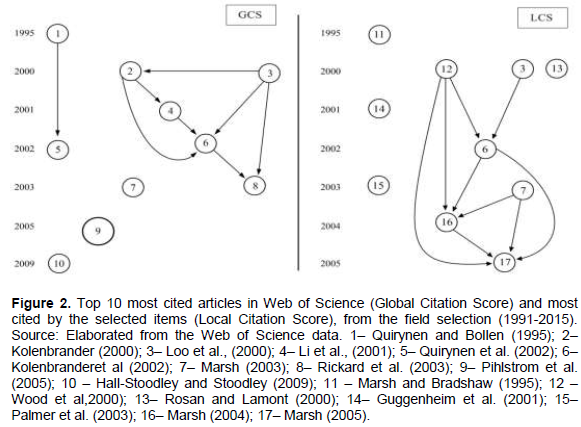 There were 921 published articles in 274 different journals indexed in the Web of Science, in the 1991-2015 year period, on training, bacterial adhesion, prevention and treatment of oral biofilms. These articles were written by 2804 authors with ties to 695 institutions in 59 countries, notably the United States and the United Kingdom. The 17 articles of greater impact were published in the 1995 to 2009 year period.
The substances that penetrate and destroy the structure of the biofilm have been already discussed in articles by means of in vitro experimental studies that have been listed for mechanisms and combinations able to penetrate the biofilm structure and reduce pathogenic bacterial activity and, in some cases, destroy bacterial structure.
The scientific evidence on this subject can contribute to the development of new research in order to fill gaps in knowledge on the prevention and treatment of oral biofilm and implement effective public policies of oral health care.