Ocular infections are widespread and they exert heavy burden on eye health. Virtually, any eye component can be infected by a diversity of bacteria. The present study was performed to determine the prevalence of external ocular bacterial infections and to find out antibiotic susceptibility pattern of bacterial isolates at eye care hospitals in Khartoum, Sudan. Two hundred and four corneal scrape and drained pus materials were received from infected eyes with clinical diagnoses of bacterial conjunctivitis, keratoconjunctivitis, keratitis, blepharo-conjunctivitis, blepharitis, dacryo-cystitis and eye abscess. Culture, microscopy with Gram’s stain of both samples, bacterial colonies and biochemical tests were carried out. Antibiotic susceptibility analysis using Kirby–Bauer disc diffusion test and standard table of antibiotic susceptibility was performed. Out of 204 samples processed, 130 (63.7%) yielded bacterial growth. The most prevalent bacterial eye infection was conjunctivitis (59.2%). Of all the isolates, 75 (57.7%) were Gram’s positive and 55 (42.3%) were Gram’s negative. Coagulase positive Staphylococcus aureus were the most prevalent, 39 (30%) followed by Streptococcus pneumonia 31 (23.8%), Haemophilus influenzae 22 (16.9%), Pseudomonas aeruginosa 13 (10%) and Neisseria gonorrheae 10 (7.7%). Gram positive bacteria were highly sensitive to vancomycin (95%), followed by chloramphenicol and ciprofloxacin (91%) and ceftriaxone (84%), while the majority were resistant to penicillin (72%). Gram-negative organisms were highly susceptible to amikacin (92.7%) followed by ceftriaxone (87.3%) and ciprofloxacin (78.2%). Major resistance was towards cotrimoxazole (82%) and ampicillin (73%).

Eye is protected by epithelia and mucous membranes which both serve as mechanical, chemical and  biological barriers against pathogens (Bolaños-Jiménez et al., 2015).  Tearing  is  an  innate  immunity  mechanism  that
flushes foreign particles from the ocular surface and act as a transport vehicle for the transfer of antimicrobial proteins and immunoglobulins (Akpek and Gottsch, 2003).
Like other mucosal surfaces, eyes are covered with protective resident microbial flora (Linden et al., 2008). Normal microbial flora of eye secretes antibacterial substances and competes with pathogenic bacteria for site and nutrients (Venkataraman et al., 2015).
Micro-organisms such as viruses, bacteria, unicellular parasites and fungi as well as multicellular parasites are capable of attacking both the surface and the interior of the eye giving rise to ocular diseases. This is the outcome of the interplay between invading organism’s strong virulence factors and the host’s depressed resistance. Poor personal hygiene, unfortunate living conditions, low socio-economic class and decreased immune status can lead to depressed host resistance (Tesfaye et al., 2013). Bacteria are the most frequent causative agents of ocular infections that might possibly culminate in loss of vision and this justifies the need for prompt treatment of serious bacterial eye infections that threatens the eye (Ubani, 2009).
Ocular infections include conjunctivitis and keratitis. These infections can damage structures of the eyes if left untreated, leading to considerable disabilities including blindness (Ubani, 2009). Other eye infections encompass dacryocystitis, dacryoadenitis, cellulitis and eye abscess (Brissette et al., 2011). Bacterial blepharitis represents another important ophthalmic infection (Bertino, 2009).
The most common worldwide mild eye infections detected in primary care clinic is conjunctivitis (Hovding, 2008). Bacterial conjunctivitis, or red eye, involves inflammation of the conjunctival mucosa. According to the American Academy of Ophthalmology Cornea and External Disease, this condition is more common in young children and the elderly than in other age groups (American Academy of Ophthalmology Cornea, 2011). The most common aetiological pathogens in bacterial conjunctivitis are Staphylococcus aureus, Streptococcus pneumonia, Haemophilus influenzae, Staphylococcus epidermidis, Enterococcus spp., Moraxella spp., Streptococci viridans group, Escherichia coli, Serratia marcescens, Pseudomonas aeruginosa and Proteus mirabilis (Bartlett and Jaanus, 2008; Cavuoto et al., 2008). Staphylococcal infections predominate in adults while S. pneumoniae and H. influenzae are more prevalent in children (Cavuoto et al., 2008).
Bacterial keratitis is another entity of ocular infections that might follow corneal epithelial barrier disruption due to injury or trauma with subsequent ulceration and infiltration of inflammatory cells (Kaliamurthy et al., 2013). The usual organisms responsible for such infections include Gram-positive bacteria such as S. aureus, S. epidermidis and several Streptococcus and Bacillus spp. as well as Gram-negative bacteria like P. aeruginosa, Moraxella spp. and Haemophilus spp. Corneal scarring or perforations are possible devastating outcomes, the avoidance of which necessitates immediate diagnosis and treatment  (Rahimi et al., 2015).
Bacterial blepharitis is an infection of the eyelid margin with subsequent engorgement, congestion and eyelashes crusting (Rahimi et al., 2015). Bacterial blepharitis is mostly caused by S. aureus and coagulase negative staphylococci (CoNS) (Musa et al., 2014).
Dacryocystitis is painful inflammation of the lacrimal sac. Obstruction of the nasolacrimal duct, whether congenital or acquired is a known predisposing factor (Rahimi et al., 2015). The most common isolates in dacryocystitis are P. aeruginosa, S. aureus, Enterobacter aerogenes, Citrobacter, S. pneumoniae, E. coli and Enterococcus spp. (Briscoe et al., 2005; Kubal and Garibaldi, 2008).
Dacryoadenitis is a related condition in which there is inflammation and infection of the lacrimal gland. It can be caused by a variety of bacterial agents including S. aureus, Neisseria gonorrheae and streptococci. Clinically, it causes pain, redness, swelling, tearing and discharge over the lacrimal gland (the lateral one-third of the upper eyelid) (Brissette et al., 2011).
Cellulitis is bacterial infection of the periocular tissue. The condition can be serious to the extent of causing vision loss (Stratton et al., 2015). It can be classified as preseptal cellulitis, orbital cellulitis, subperiosteal abscess, intraorbital abscess and cavernous sinus thrombosis related cellulitis (Gonzalez and Durairaj, 2010). Preseptal cellulitis (PC) is defined as an inflammation of the eyelid and surrounding skin with eyelid abscess being a possible outcome (Akçay et al., 2014). The most frequent pathogen implicated in the etiology of this group of ocular infections is H. influenza (Stratton et al., 2015). Currently, S. aureus and Streptococcus species cause the majority of culture positive cases of preseptal cellulitis (Gonzalez and Durairaj, 2010). This is particularly noticeable when there are co-existing local wounds (Stratton et al., 2015).
Regardless of the predisposing factor beyond eye lid abscess, local skin flora such as S. aureus is the classical causative agents (Rutar et al., 2005).
Specific antibacterial agents are the corner stone in the management of bacterial ocular infections. Defining the specific antibacterial drug requires isolation and identification of bacterial pathogens along with antibiotics susceptibility analysis (Sharma, 2011). The empirical choice of an effective treatment is becoming more difficult as ocular pathogens are increasingly becoming resistant to commonly used antibiotics (Khosravi et al., 2007). Bacterial resistance is influenced by pathogens characters and antibiotic-prescribing practices including the widespread use of systemic antibiotics together with the applied health care guidelines (Bertino, 2009).
The present study aimed at determining bacterial isolates of external eye infections among Sudanese children patients at Khartoum state in addition to studying the distribution of the common bacterial isolates in the specific clinical entities of bacterial conjunctivitis, kerato-conjunctivitis, keratitis, blepharo-conjunctivitis, blepharitis, dacryo-cystitis and eye abscess. It also worked towards finding out the distribution of these bacterial isolates among age groups and gender as well as assessing the in vitro susceptibility of these ocular bacterial isolates to the commonly used antibiotics in Sudan.

Study design
This is a crossâ€‘sectional study that included patients with clinically diagnosed bacterial conjunctivitis, keratoconjunctivitis, keratitis, blepharo-conjunctivitis, blepharitis, dacryo-cystitis and eye abscess. All patients were diagnosed by a number of ophthalmologists using standard protocols.
Ethical consideration
The study was approved by the National Ethical Committee, Ministry of Health Sudan. Permissions were taken from all hospitals administrations which were involved in this study. Written consents were obtained from every participant when applicable, or their caretakers before the enrollment in the study.
Study samples
Patients who had eye infection with occurrence of mucus and pus with the clinical diagnoses of bacterial conjunctivitis, keratoconjunctivitis, keratitis, blepharo-conjunctivitis, blepharitis, dacryo- cystitis and eye abscess were included in this study. The patients were of different ages, from 1 day to 15 years old. A total of 204 samples were collected from patients attending the Ophthalmology Teaching Hospital and Noor Al-Oyoon Hospital. Patients or alternatively their caretakers were signed informed consents. Purulent material from the surface of lower conjunctival sac and inner canthus of eye were aseptically collected by sterile saline pre-moistened swabs. In abscesses cases, abscesses were incised and the drained pus was obtained. This was done before the instillation of antimicrobial or steroidal eye-drops for treatment. Sample collection was done by ophthalmologists taking care of the participants. The samples were transferred to laboratory immediately in cold box for bacteriological examination.
Culture and identification
For each patient, a portion of the corneal scrape and the drained pus materias obtained were used for direct microscopy (Gram-stained smear) while the remaining material was inoculated directly onto the following media: blood agar, chocolate blood agar and MacConkey agar that support the growth of bacteria. Plates were incubated at temperature of 37°C. Aerobic atmospheric condition was maintained for the blood agar and the MacConkey agar while 10% carbon dioxide (CO2) atmosphere was provided for the chocolate agar. All plates were initially examined for growth after 24 h and culture with no growth were re-incubated for further 48 h.
The bacteria isolated were identified by standard bacteriological test methods. Pure isolates of bacterial pathogens were preliminary characterized   by   colonial   morphology   and   Gram-stain.   Other biochemical procedures were used for full identification of Gram-positive and negative bacteria which included motility, indole, urease, oxidase, catalase and lactose fermentation tests. The pattern of utilization of X and V factors (Oxoid, Hampshire, UK) was employed for Haemophilus spp. characterization. Catalase and coagulase tests as well as haemolysis pattern on blood agar were used for identification of Gram-positive bacteria. Optochin sensitivity test was performed to identify S. pneumoniae and tributryin strips (Sigma Aldrich- Germany) were used for identification of Moraxella catarrhalis.
Antimicrobial susceptibility testing
Isolates that were identified were tested for their susceptibility to a range of antibiotics using Kirby–Bauer disc diffusion test according to the clinical and laboratory standards institute (CLSI) guidelines. Antimicrobial susceptibility testing was performed for bacterial isolates by using the following antibiotics supplied by Oxoid Ltd.: amikacin (30 μg), chloramphenicol (30 μg), ciprofloxacin (5 μg), gentamicin (10 μg), co-trimoxazole (25 μg), ceftriaxone (30 μg) and amoxicillin (10 μg). Mueller-Hinton agars (oxoide) were used for the antibiotic sensitivity screen for non fastidious bacteria and 5% defibrinated blood was added along with Muller–Hinton agar for fastidious bacteria. Antibiotic discs added to Muller–Hinton plates were incubated at their respective optimal temperature and then the zones of inhibition diameters were measured. The results were interpreted according to the Clinical Laboratory Standards Institute (CLSI) guidelines as sensitive, intermediate and resistant (CLSI, 2014).
Statistical analysis
Statistical analysis was performed using SPSS version 16 software. The associations of sociodemographic and clinical data to isolated pathogens were carried out by using the Pearson Chi-square test. P-value ≤ 0.05 was considered as statistically significant. 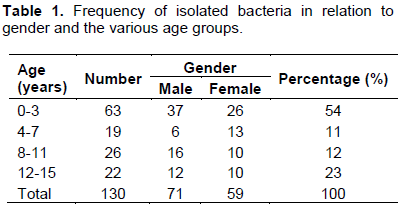 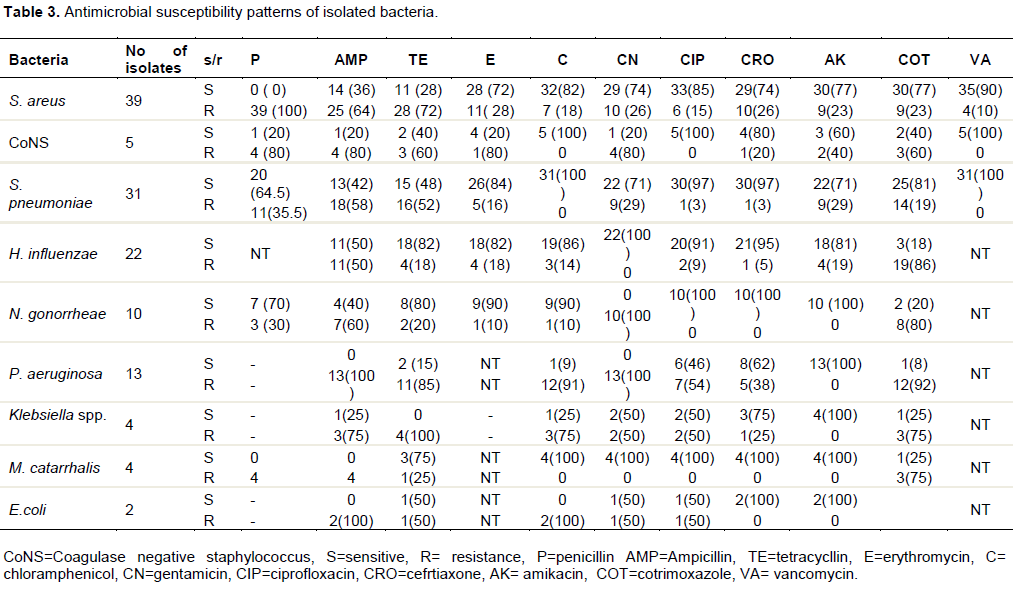 Bacterial external ocular infections are of considerable prevalence among Sudanese pediatrics population. They are the cause of no less than two thirds of all cases. Gram positive bacteria constitute more than half of the isolates with Staphylococcus species being the most predominant ones. However, Gram negative bacteria have comparatively significant contribution to this category of diseases. Different antimicrobial susceptibility patterns were identified. Consequently, identification of potential pathogenic bacteria implicated in these infections    through   culture    and     biochemical tests techniques as well as recognition of drug susceptibility pattern must be carried out as routine diagnostic laboratory tests for proper management. The etiological agents responsible for a considerable fraction of clinically diagnosed cases were not identified by conventional methods. Accordingly, workup of other causes like bacteria not recognized by traditional methods is required including sophisticated techniques such as molecular modalities. Non-bacterial infective organisms and non-infective agents should also be investigated.