Three different biomaterials viz., boiled cow milk, compost manure and tomato rhizospheric soil were found as habitats of the thermophilic antagonistic bacteria. The isolated bacteria were able to grow satisfactorily at thermophilic temperature range (>55ï‚°C). Based on morphological, biochemical and physiological characters, the bacterial isolates were identified as Bacillus licheniformis (boiled cow milk), and Bacillus stearothermophilus (compost manure and tomato rhizospheric soil). All the three thermophilic bacterial isolates exhibited strong antagonism against tested soil-borne fungal plant pathogens in order of B. lechaniformis (inhibition zone of 67.67 mm against R. bataticola) > B. stearothermophilus from compost manure (51.67 mm against R. solani) > B. stearothermophilus from tomato rhizospheric soil (38.33 mm against P. aphanidermatum). The ability to tolerate high temperature (>55ï‚°C), pH (6-8) and salt concentrations (up to 8%), and antibiotic resistance properties of the antagonistic thermophilic Bacillus isolates may hold them as potential biocontrol candidates, especially under stressed rhizosphere environments where other biocontrol agents fail.  However, the results need further confirmation under field conditions where these bioagents will be applied in a formulated form.

Antagonistic bacteria are the ideal candidates for biocontrol of plant diseases of economically important crops; for example Bacillus subtilis GB-03 against F. oxysporum f. sp. vasinfectum and R. solani in cotton (Brannen and Backman, 1994), Bacillus cereus against Phytopthora sojae in soybean (Osburn et al., 1995). However, failure of bacterial antagonists to survive and accord long term disease control under environmental stress conditions is a major hindrance to the adoption of biocontrol strategies for management of soil borne plant diseases (Hoitink and Boehm, 1999). The antagonistic bacteria that could tolerate extreme environmental conditions and offer efficient control of fungal plant pathogens are supposed to be good alternative for plant disease management. Being endospore formers, thermophilic bacteria can tolerate heat and resist themselves from desiccation under high temperature stress, a feature makes them an attractive candidate for biocontrol of plant diseases (Rao et al., 2007; Wightwick et al., 2010). They exhibit excellent seed and root colonising ability, thereby suppressing the growth of fungal pathogens effectively (Kim et al., 1997). Besides, they are abundantly present in rhizospheric soils as saprophytes which make them as ideal biological control agents for soil-borne plant diseases.

The occurrence of thermophilic bacteria has been reported from various biomaterials like milk and milk products (Ruckert et al., 2004; Ronimus et al., 2006), compost manure (Miyatake and Iwabuchi, 2005), and crop rhizospheric soils (Sao Paulo, 2007; Santana et al. 2013). However, their use as potential bioagents for the control of soil-borne fungal plant pathogens has been less explored. The basic aim of the present study was to isolate and characterize the thermophilic bacteria from three different biomaterials viz., boiled cow milk, compost manure and tomato rhizospheric soil and to evaluate their antagonistic potential against important soil borne fungal pathogens for possible introduction as biocontrol agents in plant disease management. Our study helped in identifying the promising candidate isolates of thermophiic bacteria which can further be up scaled for commercial bioformulation for control of destructive soil borne crop diseases.

The samples of boiled cow milk and compost manure were obtained from the Cattle Improvement Scheme, Department of Animal   Science    and    Dairy   Science,   Mahatma   Phule   Krishi Vidyapeeth (MPKV), Rahuri. The rhizospheric soil of tomato crop was collected from experimental field of the Vegetable Improvement Scheme of Department of Horticulture, MPKV, Rahuri, Maharashtra, India. The temperatures of the sources at the time of the sampling were recorded as 81, 69 and 40ï‚°C for boiled cow milk, compost heap and tomato rhizospheric soil, respectively. The samples were collected in sterile polybags and immediately brought into the laboratory for isolation.

The bacteria from collected samples were isolated on Nutrient Agar (NA) medium (Himedia, Mumbai, India) following enrichment culture technique (Allen, 1953). The 250 ml conical flasks containing 10 g of sample and 90 ml sterile nutrient broth were homogenised in orbital shaker at 150 rpm and were heat shocked by placing in water bath at 80ï‚°C for 10 min. The suspensions thus obtained were serially diluted. The sterilie NA plates were inoculated with 1ml of solution from serial dilution of 107 using spread plate technique (), and were incubated at 55ï‚°C for 24 h. The distinct single colonies were subcultured onto freshly prepared manganese agar slants to facilitate further growth. The pure cultures of bacterial isolates were subjected to different temperatures ranging from 5 – 80ï‚°C for determination of thermal death points and survival at higher temperatures. For temperatures between 5 – 65ï‚°C, the bacterial isolates were tested using nutrient agar whereas for hyper thermophilic range (70 - 80ï‚°C) nutrient broth was used (Seeley and Vandemark, 1970). After incubation for 24 h, the NA plates were observed for growth pattern of bacterial isolates at respective temperatures while test tubes with NB were observed for turbidity.

Sensitivity to the concentrations of pH, NaCl and antibiotics in growth media

The effects of various concentrations of pH (2-10), NaCl (1-10%) and antibiotics on growth and sporulation of thermophilic bacterial isolates were determined by inoculating the NA slants with overnight cultures of thermophilic Bacilli and incubating at 50ï‚°C for 48 h (Gulati et al., 2007; Singh et al., 2010). Sensitivity to antibiotics viz., streptocyclin, streptomycin sulphate, bacterianashak and cyclohexamide with different concentrations (ppm) was evaluated (Imanaka et al., 1981). Growth pattern of bacterial isolates on different concentrations of pH, NaCl and antibiotics were characterised as no growth (-), slow growth (+), moderate growth (++), profused growth (+++) and very profused growth (++++).

In vitro screening for antagonism against soil borne fungal pathogens 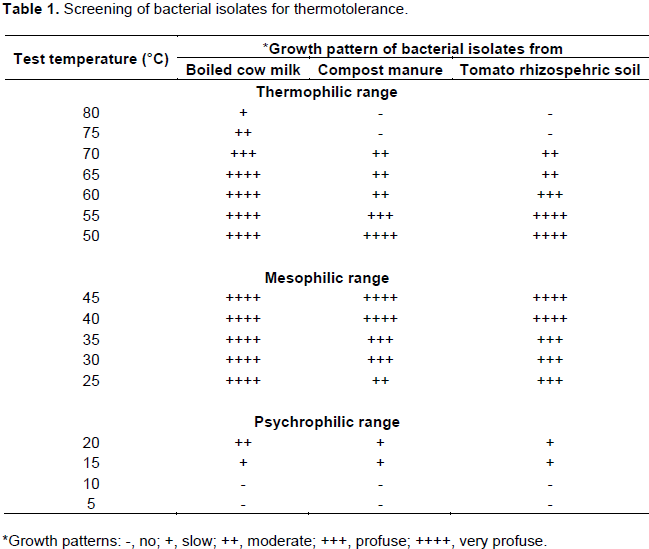 Characterization and identification of thermophilic bacteria

The microscopic observations of thermophilic bacteria revealed that, all the three isolates were gram +ve, motile rods and capsule formers with endospores produced terminally (Figure 1). On nutrient agar (NA) medium, bacterial isolate from boiled cow milk produced creamy yellow, circular colonies with smooth glistening surface, raised elevation and smooth edges. Similarly, the colonies of bacterial isolates from compost manure and tomato rhizospheric soil were creamy white, flat with no elevation, rough and dry surface and with wavy edges.  The characters observed were typical of the family Bacillaceae and were similar to those reported in literature (Nunes de Souza and Martin, 2001; Esikova et al., 2002; Pathak and Rekadwad, 2013). 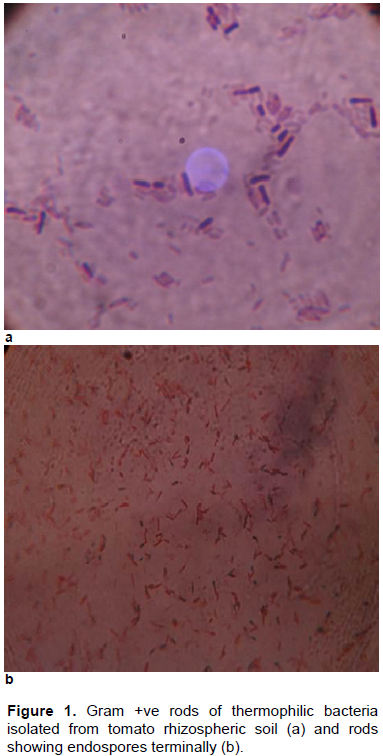 The biochemical tests indicated that all the three thermophilic bacterial isolates were strict aerobes, catalase positive, oxidase positive, and were able to produce the acid from glucose, fructose, lactose and sucrose, except bacterial isolate from tomato rhizospheric soil which did not produce acid from lactose (Figure 2). None of the isolates could produce gas from glucose. The tests of casein hydrolysis and starch hydrolysis (Figure 3), and gelatin liquefaction were positive for all three isolates. The test of citrate utilization was positive only for the bacterial isolate from boiled cow milk (Figure 4). The other biochemical tests like H2S production, indol formation and urease activity were negative for all three thermophilic isolates. The test of methyl red was positive for all the three bacterial isolates whereas the Voges-Proskaer test was positive only when pH of the growth medium was less than 6.0. The biochemical characterization revealed that all the three thermophilic isolates are distinctly different from each other (Table 2). Our results are in larger agreement with literature reports. Nunes de Souza and Martin (2001) reported that thermophilic bacterium isolated from a soil sample in Rio de Janeiro, Brazil was strictly aerobic and catalase +ve.  Fujio and Kume (1991), Akanbi et al. (2010) and Panda et al. (2013) also identified the thermophilic strains of bacteria as Bacillus sp. based on conventional gram straining    technique,    physiological    and    biochemical characterizations. Singh et al. (2010) reported that thermophilic Bacillus cereus SIU1 strain isolated from slightly alkaline soils of Uttar Pradesh was strict aerobe with positive catalase and oxidase activity and was able to hydrolyze casein and gelatin. All these reports are closely in agreement with present findings indicating that our thermophilic antagonistic bacterial isolates were of Bacillus sp. 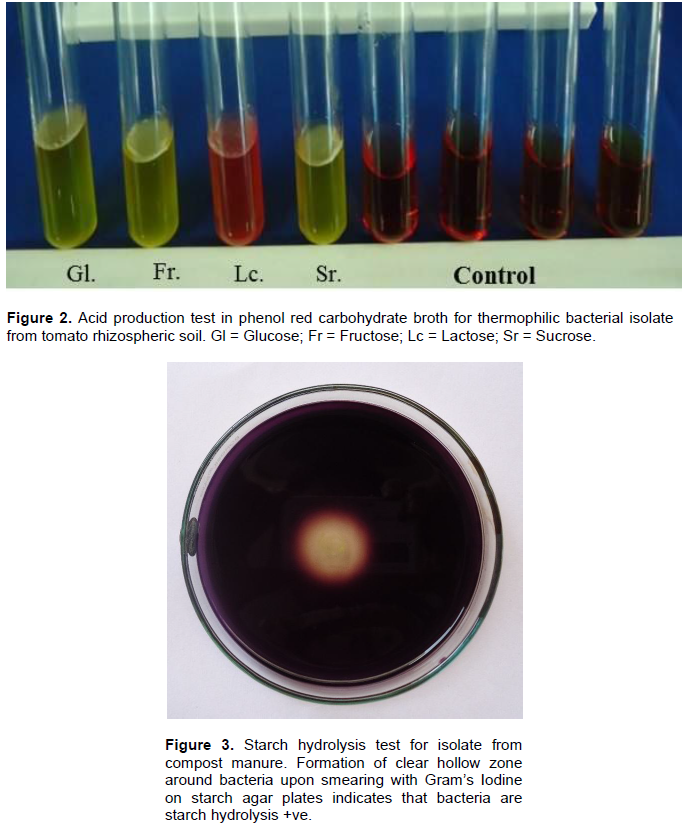 All the three thermophilic bacterial isolates preferred a pH range between 6.0-8.0, at which profuse growth was observed, even though they could grow at a wider pH range between 4-10. None of the isolates preferred highly acidic  (2.0)  and  highly  alkaline  (12.0)  pH  range (Table 3). Our results are closely in agreement with earlier reports on pH tolerance of thermophilic antagonistic bacteria. Nunes de Souza and Martin (2001) observed the optimum growth of a thermophilic bacterium from a soil sample in Rio de Janeiro, Brazil at pH 7.0. Gulati et al. (2007) reported that thermophilic strain of Bacillus laevolacticus isolated from the rhizospheric soil of fenugreek plant (Medicago falacata) was optimally active  at   pH   between  7.0 - 8.0.  Singh  et   al.   (2010)  reported that thermophilic Bacillus cereus SIU1 strain isolated from slightly alkaline soils of Uttar Pradesh grew over a wide range of pH between 5.0 -12.0. 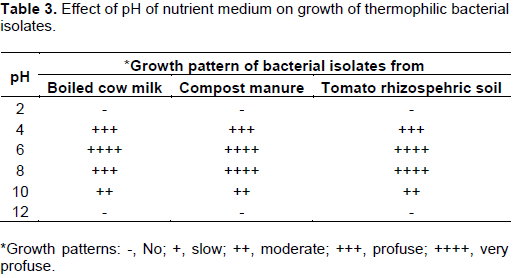 The antibiotic sensitivity of three thermophilic isolates varied for each of the antibiotic group tested. The isolate from boiled cow milk could tolerate concentrations of streptocyclin and streptomycin sulphate as high as 500 ppm, whereas the other two isolates could tolerate only up to 50 ppm. The isolate from tomato rhizospheric soil was more resistant to Bacterianashak (a bactericide) and could tolerate up to 1000 ppm, whereas the remaining two were able to tolerate only up to 500 and 250 ppm, respectively. The isolate from boiled cow milk (B. licheniformis) was less sensitive to cyclohexamide and could grow at concentration as high as 7000 ppm. On the other hand, rest of the two bacterial antagonists could grow only up to 4000 ppm concentration cyclohexamide (Table 5). Very few literature reports exist on antibiotic sensitivity of thermophilic bacteria for comparison with our results. Imanaka et al. (1981) tested the thermophilic Bacillus subtilis strains isolated from hot springs and compost for resistance to antibiotics. They reported that bacteria were resistant to antibiotics like tetracycline (250 ppm) and streptomycin sulfate (1000 ppm). The antibiotic resistance of the thermophilic bacterial antagonists from present study indicates them as potential biocontrol candidates for safe integration with bactericides (antibiotics) commonly used in disease management. 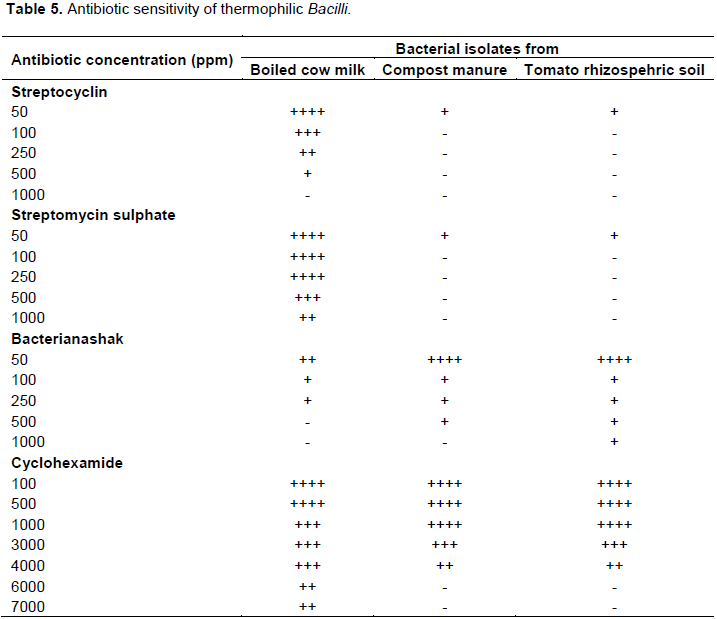 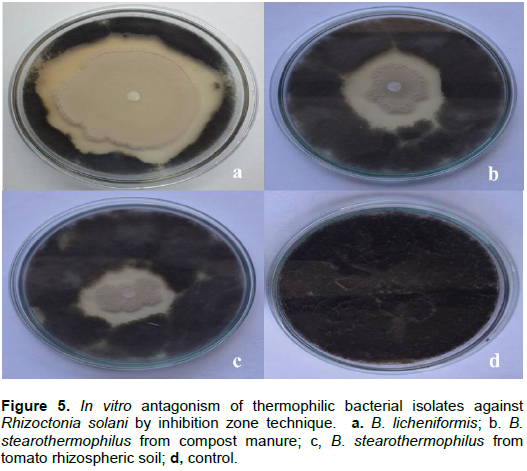