The aim of this paper is to determine the prevalence of anti-HIV, anti-rubella antibodies, syphilis reagins and enteroparasitosis in pregnant women during their pre-natal monitoring at the Basic Health Units in the city of Umuarama (PR) and checking possible social-economic and behavioral associations. A cross-section study was performed in 690 pregnant women who went to have pre-natal checkup in the period from June 2012 to April 2014. From the 690 pregnant women analyzed, 78 presented enteroparasites, and from these, 69 were monoparasited and nine were polyparasited, nine presented antibodies against syphilis and two against HIV. None was reagent for IgM regarding rubella. The most prevalent parasite species was Endolimax nana 43/78 followed by Entamoeba coli 33/78 and Giardia duodenalis 05/78. Regarding the variables analyzed, the ones associated to enteroparasitary infections were water treated from public suppliers, fundamental level of schooling, sewage destination and public collection of garbage. For syphilis, the variables associated to infection were per capita income and age group. For HIV and rubella, no association among the variables was observed. The number of pregnant women infected in the present study was not considered high when compared to other studies.

Women who experienced metabolic, endocrinological and immunological changes during pregnancy, as such might be at greater risk of infections (Vieira, 2008). Infections during pregnancy present a great risk for both the mother and her fetus (Vieira, 2008). During antenatal visits, pregnant individuals are examined for intestinal parasitosis, syphilis bacteria, rubella virus and human immunodeficiency virus (HIV). Of importance, the early diagnosis of these infections and early treatment can potentially minimize deleterious impacts to the newborn.
Enteroparasitosis is caused by the intestinal helminths and other protozoa, and approximately 3.5 billion people globally experienced enteroparasitosis (Belloto et al., 2011). Studies have shown that, during pregnancy, infection with intestinal parasites can results in intra-uterine growth Furthermore, enteroparasitosis can contribute anemia as well as deficiencies in iron, protein, folic acids and zinc, which can interfere with the course of pregnancy, leading to possible damages to the fetus (Macedo and Rey, 1996; Souza et al., 2002; Morales et al., 2006).
According to DATASUS (Department of Information Technology for the Brazilian Unified Health System), in Paraná (PR), from 2008 to 2012, a total of 772 cases of congenital syphilis were confirmed (REF). Such high prevalence reflects the mandatory need to examine such infection during pre-natal checks, ultimately reducing the possibility of transmitting Treponema pallidum, the etiologic agent of the disease to the newborn (Costa et al., 2013a). Furthermore, syphilis during pregnancy can lead to early and late complications including, fetal and neonatal death, prematurity, low birthweight, physical defects and neurologic damages (Rodrigues and Guimarães, 2004; Amorim and Melo, 2009).
Rubella, on the other hand, is a disease caused by a virus, belonging to the Rubivirus genus from the Togaviridae family (Costa et al., 2013b). When the fetus gets infected, high rates (up to 90%) of spontaneous abortion, stillbirth, congenital defects, vision problems, deafness, and heart and mental problems have been observed (Francisco et al., 2013). After vaccination was implemented, there was a reduction of 61.5% in the incidence of rubella, in the period from 1999 to 2001 ranging from 8.85 to 3.3 cases in every 100 thousand inhabitants (Francisco et al., 2013).
Finally, when considering HIV, 0 to 2.0% of pregnant women are carrier of the virus (Amorim and Melo, 2009). Critically, approximately 90% of the cases of HIV infection in people was acquired through vertical transmission (Carvalho and Piccinini, 2006) and therefore, the Brazilian government is dedicating itself to reduce the rate of vertical transmission of the Human Immunodeficiency Virus (Santos and Souza, 2012). When infected, the child usually presents unspecific symptoms, which includes deficiency in immunity that contributes to the child vulnerable to opportunistic infections. Neurological changes due to HIV neurotropism in a brain that is not fully developed, may lead to the delay in neuro-psychomotor development, delay in language learning, mental deficiency, hyporeflexia and pyramidal syndrome (Manfredi et al., 2011).
Vertical transmission of etiologic agents (Human Immunodeficiency Virus (HIV), Treponema   pallidum (Syphilis) and Togavirus (Rubella), can take place during pregnancy and at the time of birth or during breastfeeding (Araujo et al., 2008; Amorim and Melo, 2009; Costa et al., 2013a, b). It is important to emphasize that in the case of enteroparasitosis, there is no transmission of the parasite but infected pregnant women experienced nutrients deficiencies that are necessary for the fetus (Vieira, 2008).
Considering the importance of these diseases and the damage they can cause to the newborn, it is necessary to diagnose infections during prenatal examinations. Thus, the objective of this study is to determine the prevalence of anti-HIV antibodies, anti-rubella, syphilis reagents and enteroparasitosis in pregnant women during prenatal monitoring in the Basic Health Units of the city of Umuarama (PR) and to verify possible economic and behavioral.

Study location and sampling
The city of Umuarama is in the Northwestern region in the state of Paraná, Brazil (latitude 23°47' 55 South and longitude 53°18' 48 West), with 100676 inhabitants (IBGE, 2010).
To determine the size of the sample, an estimated number of 1,000 pregnant women/year seen at 23 Basic Health Units (UBS) in PR was used. For this study, the expected prevalence of 50, 5 error and 5% significance level (p ≤ 0.05) were used, resulting in the minimum ideal number of 278 samples.
This research included pregnant women who agreed in signing the free and informed consent term (TCLE) and who had their pre-natal in one of the 23 UBSs in Umuarama (PR), in any phase during their pregnancy. Blood and fecal collection were performed between June 2012 and May 2013, totaling 690 samples.
Laboratory examinations
Diagnostic tests were performed at the Clinical Analysis Laboratory of UNIPAR. For detection of T. pallidum, the samples were submitted to VDRL (Venereal Disease Research Laboratory) and in the presence of agglutination the sample was confirmed by Indirect Immunofluorescence Assay.
For detection of antibodies to rubella virus, serum samples were subjected to IgG and IgM antibody screening by chemiluminescence examination, with reagent IgM higher than 1.0 IU / mL and non-reactive IgM of less than 0.8 IU / ML, reagent IgG of greater than 20.0 IU / mL and non-reactive IgG of less than 10.0 IU / mL (ARCHITECT i2000sr®-Abbott, USA) according to the manufacturer's instructions.
For the HIV scan, a Rapid Immunochemography - HIV 1/2 3.0 strip test (Bioeasy, India) was performed according to the manufacturer's instructions and the reagent samples were confirmed by western blotting. Fecal samples were submitted to Spontaneous Sedimentation, and Centrifuge-fluctuation techniques for parasitological analysis (Hoffman et al., 1934; Faust et al., 1970).
Research instrument
For the detection of variables associated to the different infections, the pregnant women were interviewed. They answered an epidemiological questionnaire containing information on their age, marital status, number of pregnancies, profession, house, level of schooling, per capita income, origin of water consumed, destination of sewage and garbage, consumption of raw fruit and vegetables.
Statistical analysis
The information in the research instrument was stored and analyzed by the EpiInfo Program (Dean, 1996). The Fisher’s exact test and the Chi-Square test corrected by Yates were used to verify the association among the variables studied, and the Odds Ratio (OR) was calculated to verify the intensity of associations among the four different infections and the variables studied. For all analyses, 5% significance level (p ≤ 0.05) was used.

Fecal samples from 690 pregnant women were analyzed out of which, 78 (11.30%) samples were positive for eneteroparasites. Among the 78 positive samples, 69 (88.46%) presented monoparasitism and 9 (11.54%) presented polyparasitism.
The most prevalent parasite species was Endolimax nana 43/78 (55.13%), followed by Entamoeba coli 33/78 (42.31%), Giardia duodenalis 5/78 (6.41%), Enterobius vermicularis 3/78 (3.85%), Strongyloides stercoralis 2/78 (2.56%) and Ascaris lumbricoides 01/78 (1.28%).
Regarding the other diseases,  9/690  (1.3%)  pregnant women presented antibodies against syphilis bacteria and 2/690 (0.30%) against the human immunodeficiency virus (HIV). Regarding rubella, 664/690 (96.20%) presented reactivity for IgG and no sample was reacting to IgM. Here, no pregnant woman analyzed presented co-infection, that is, infection by more than one disease, among the four diseases studied herein (Enteroparasitosis, Syphilis, Rubella and HIV). The positivity of pregnant women infected with the respective diseases was not very high when compared with other studies.
Regarding the variables analyzed, the variables associated to enteroparasitary infections were water treated from public suppliers (p=0.023), basic/secondary level of schooling (p=0.011); basic/tertiary level of schooling (p=0.032), sewage destination (p=0.030), and public collection of garbage (p=0.038). For syphilis, the variables associated to the infection were per capita income (p=0.048) and age group (up to 20/21-30: p=0.010; up to 20/older than 31; p=0.022). Regarding HIV and rubella, there were no significant associations with the variables analyzed (Tables 1 and 2). 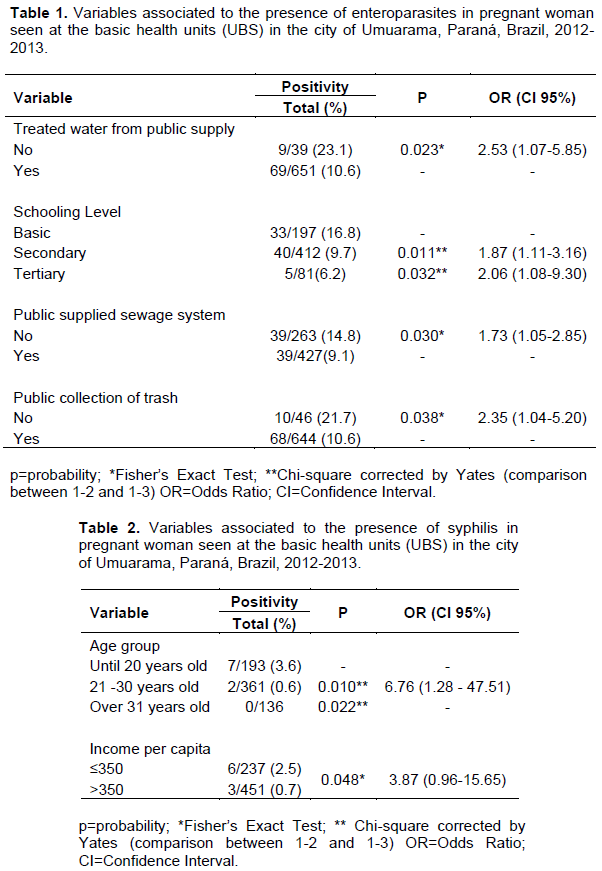 When analyzing the prevalence of the four diseases researched, it could be noticed that when compared to other studies, these diseases did not present a high prevalence, which demonstrates a better preparation of the pregnant women and also to the local health agents regarding knowledge of the infections.
However, as long as there are infected pregnant women, solution must be made in preventing the diseases by the government. In this case, regarding to education and basic sanitation which were presented as variables with significant association in relation to syphilis and enteroparasitosis, diseases that are related to social-economic and behavioral factors, as well as basic sanitation is regarded to the results obtained in enteroparasitosis.