Epidemiologic and traceback evidence of Salmonella infection is not much in many developing countries including Burkina Faso. This study investigates the antimicrobial resistance and distribution of Salmonella serotypes isolated from diverse sources in Burkina Faso. 615 Salmonella serotypes isolated from beef meat, poultry carcasses, poultry, swine, cattle, hedgehog, fish, salad, channel and humans from 2009 to 2011 were analyzed to identify their diversity and distribution among the samples. The Salmonella strains were subjected to antimicrobial sensitivity tests using disk diffusion methods, were analyzed and classified into 110 serotypes, with the most prevalent serotype being Derby (91/615) found in beef meat, poultry carcasses, poultry and fish; Muenster (48/615) found in cattle, swine, hedgehog, poultry, human and fish; Chester (38/615) found in poultry carcasses, swine and poultry feces; Hato (32/615) found in beef meat, poultry carcasses, cattle and poultry; Drac (30/615) found in cattle, hedgehog and fish; and Typhimurium (21/615) found in cattle, poultry, human and fish. Among the 615 Salmonella strains, 94% (581/615) were resistant to one or more antibiotics; resistance to streptomycin was the most common. The resistance pattern, Str-Sul-Tet, Str-Tet and Str-Sul was dominant and found in 80% of the strains. About 3% of the strains were resistant to 5 or 6 antibiotics; their resistance pattern is amp-str-sul-tet-tmp or amp-chl-str-sul-tet-tmp. One Salmonella strain, S. Kentucky isolated from human stool was resistant to eight antibiotics; the resistance pattern is amp-str-sul-tet-cip-gen-nal-mec. Findings from this study can help define the guidelines for basic surveillance system of Salmonella and other enteropathogenic bacteria circulating among humans, animals, food and environment.

Salmonella spp. especially Non-Typhoid Salmonella (NTS) is a common source of foodborne diseases that cause morbidity and mortality worldwide (Smith et al., 2016). It is estimated that Salmonella spp. cause 93.8 million cases of gastroenteritis and 155,000 deaths each year worldwide. Approximately 86% of these cases are the result of foodborne infections (Majowicz et al., 2010). In Burkina Faso, bacteriological results showed that the rate of Salmonella contamination remains quite high (Simporé et al., 2009). In fact, the infection progresses mostly  periodically and rarely in an epidemic mode, and they are not reported due to  lack of food borne pathogens surveillance system.
Salmonella spp. can survive for long periods in natural waters, and the persistence of specific and epidemic strains is a great concern in public health. However, information on the diversity and occurrence of Salmonella strains is very scarce (Cui et al., 2008), making the ecology of these species remains unknown. Food animals, including poultry, pigs, and cattle are the key reservoirs for human salmonellosis (Hauser et al., 2011). In developing countries, wild and food animals are the sources of Salmonella distribution in water, vegetables, salad and the products derived from these animals due to lack of hygiene (Kagambèga et al., 2013). The emergence of antimicrobial resistant Salmonella is mostly associated with the non-therapeutic use of various classes of antimicrobials in large quantities in food animals (Marshall and Levy, 2011; Mir et al., 2015).
Researchers have reported a link between the use of antimicrobials in food animals and the emergence of antimicrobial resistance in pathogenic bacteria (Ungemach et al., 2006; Mir et al., 2015). The increasing number of multidrug-resistant NTS strains is a global concern; this has made some countries and international organizations create surveillance systems which include collaboration between human health, veterinary, and food related sectors to monitor the spread of foodborne bacteria.
Unfortunately, these surveillance systems are missing in many developing countries like Burkina Faso. The absence of controlled reporting of Salmonella serotypes through the WHO-GFN program in Burkina Faso inspired the compilation of data on the sporadic reporting of Salmonella serotypes isolated from various sources. Therefore, the purpose of the present study is to provide information on the diversity and antimicrobial resistance of Salmonella strains isolated from environment, animals, food and humans. These data will allow one to follow the trends in Salmonella enterica serotypes that provide information about sources of infection and the efficacy of prevention and control measures.

A total of 615 strains of Salmonella isolated from meat, poultry carcasses, poultry, cattle, pigs, hedgehog, water, salad and humans were distributed into 110 different serotypes (Table 1). The six most prevalent serotypes were Derby, Muenster, Chester, Drac, Hato and Typhimurium. Salmonella Derby (91/615) was found in beef meat (n=2), poultry carcasses (n= 34), poultry (n= 52) and fish (n = 3). Our findings show that S. Derby is the most often isolated serotypes in poultry. This is in contrast with results reported by some authors, showing that this serotype is most common in pig and also the 4 most frequently isolated serotype in humans in Europe (Kerouanton et al., 2013; Hauser et al., 2011). 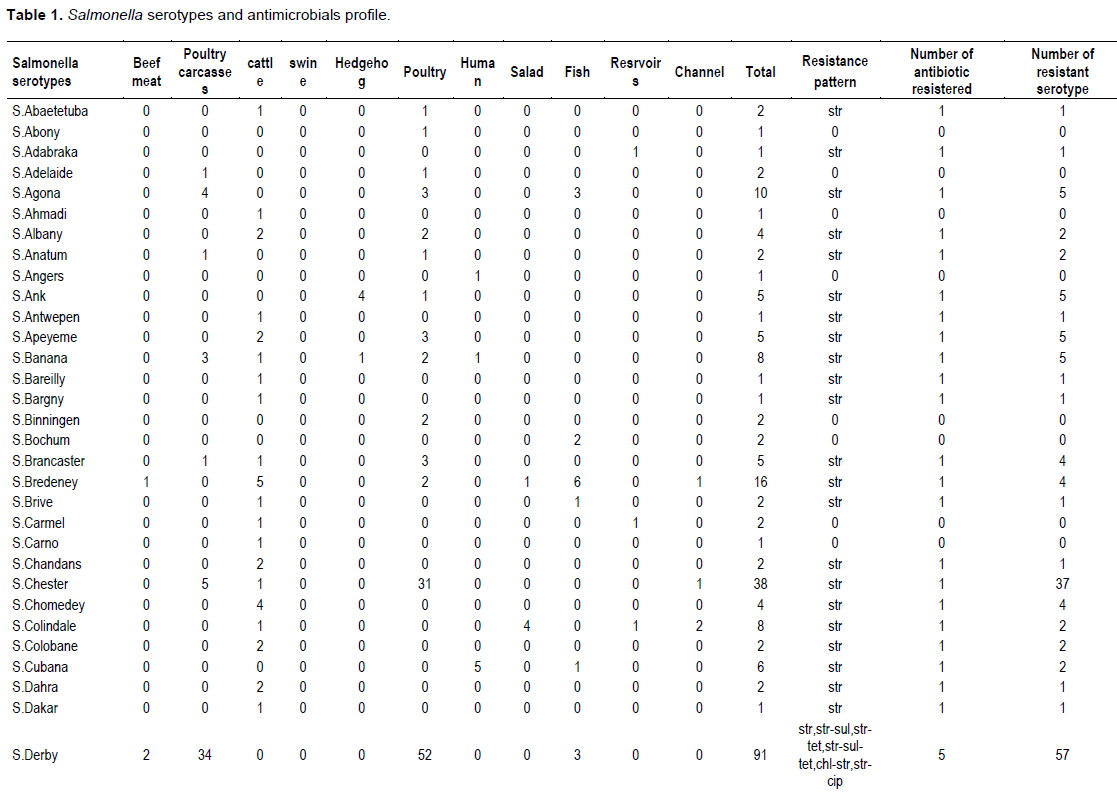 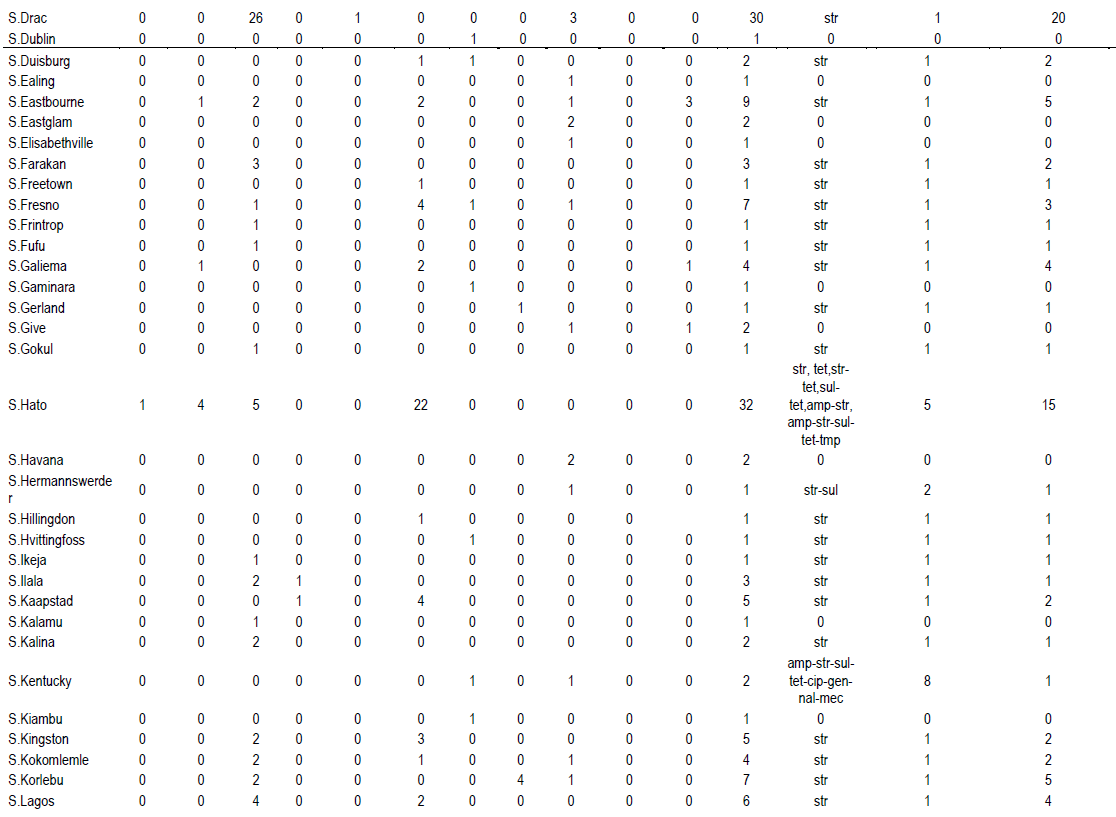 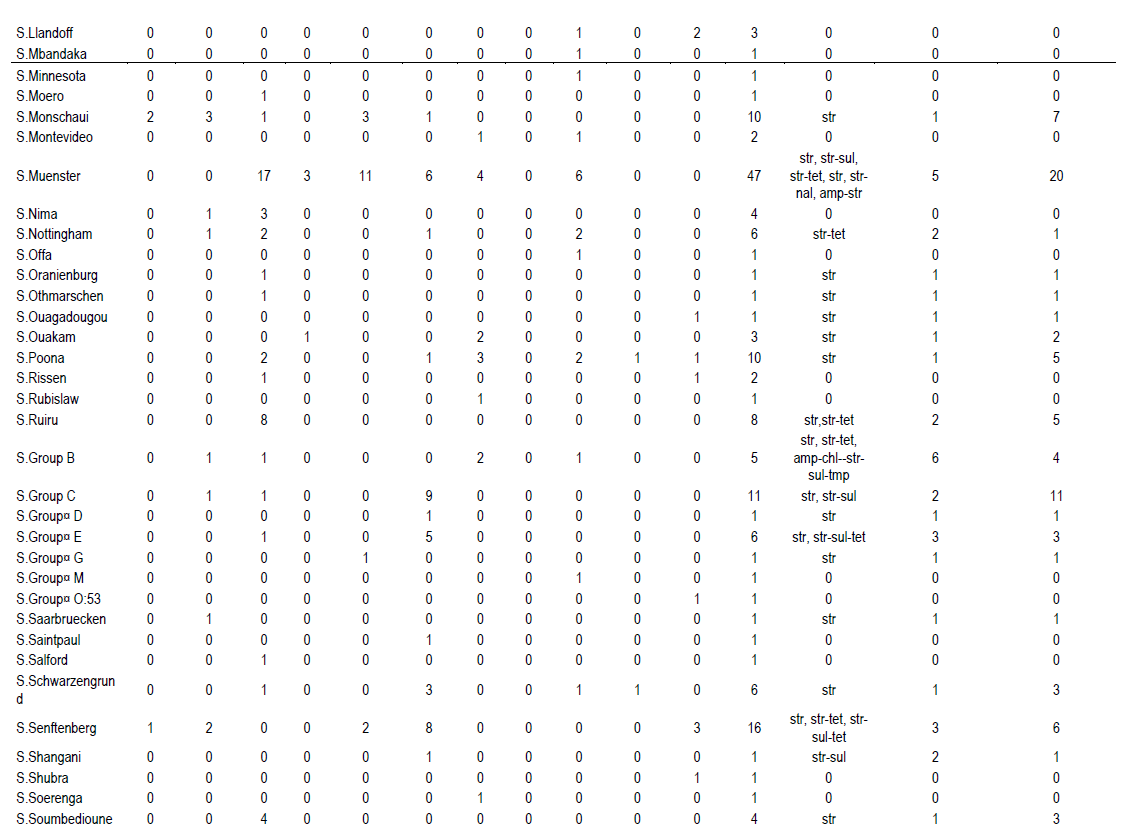 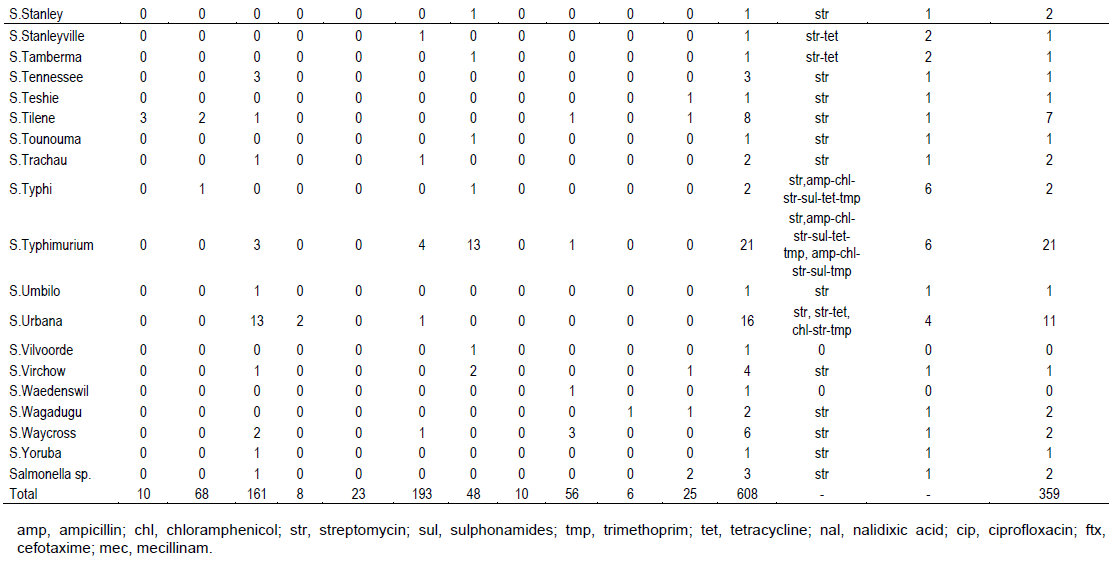 Salmonella Muenster was the second most common serotype and was found in cattle, swine, hedgehog, poultry, human and fish. This finding shows that this serotype is not restricted to one host but can be found in animals, foods, water or humans. A documented food poisoning outbreak caused by S. Muenster occurred in Canada in 1982; it infected cheddar  cheese  made  from unpasteurized milk (Wood et al., 1984). Salmonella Chester was found in poultry carcasses, swine and poultry feces; this serotype has been reported in many countries: in Canada, S. Chester was responsible for an outbreak associated to frozen meals in 2010 (Taylor et al., 2012); in 2014, six European countries (Belgium, France, Spain, Germany, Sweden and the UK) reported S. Chester cases to the European Centre for Disease Prevention and Control (ECDC) associated with travel in Morocco (Whitworth, 2016). Salmonella Hato  was  found in beef meat, poultry carcasses, cattle and poultry; Salmonella Drac was found in cattle, hedgeghog and fish. Salmonella Typhimurium was found in cattle, poultry, human and fish. S. Typhimurium has been implicated in many outbreaks worldwide (Rayamajhi et al., 2008). This serotype has a well-characterized ability to infect various species (Rabsch et al., 2002) and can survive for a long time in the environment (Baudart et al., 2000); these 2 factors enhance the ability of this serotype to  be   one   of   the   most   common   causes   of salmonellosis in many geographically diverse regions and has caused many disease outbreaks (Mather et al., 2013; Cui et al., 2008; Galanis et al., 2006).
Although serotype Typhimurium was associated with several foods of animal origin, the most common was chicken (26% of outbreaks), indicating that chicken is a major route of exposure. This corroborates with our present results, where poultry is identified as  the  primary source of S. Typhimurium. In contrast to the report of Foley et al. (2008), Typhimurium was the most common serotype among pork associated with outbreaks. This shows that serotype Typhimurium has emerged as the predominant serotype in swine. After the six most prevalent serotypes, the presence of serotype like Typhi (poultry carcasses and human), Senftenberg, Virchow, Kentucky, Stanley and Kingston which have caused many outbreaks in diverse regions were noted. The presence of S. Typhi in poultry carcasses shows that   there is a cross-contamination during carcasses handling since humans are the only reservoir of typhoid Salmonella. This is also due to the fact that humans can be a chronic carrier of these Salmonella (Eng et al., 2015).
Carriers of S. Typhi and S. Paratyphi are responsible for the spreading of enteric fever in endemic regions, as the common transmission route is the ingestion of water or food, contaminated with the feces of chronic carriers (Bhan et al., 2005). In this report, Salmonella serotypes Drac, Banana, Monschaui, Muenster, Seftenberg are found in wild hedgehogs. This animal has been the source of human salmonellosis in many Europeans countries, used as a pet animal (Nauerby et al., 2000). Although little can be done to prevent the spread of Salmonella in the environment amongst wild animals, the control should be done in food handling and drinking water.
Our results show that the same serotype of Salmonella is found in diverse sources, meaning that this serotype can be transmitted to humans through many sources. In general, food animals such as swine, poultry and cattle are the prime sources of Salmonella infections. The major dissemination routes of the pathogens involve trade in animals and uncooked animal food products. The slaughtering process of food animals at abattoirs is considered one of the important sources of organ and carcass contamination with Salmonella (Gillespie et al., 2005). In Burkina Faso, all serotypes of Salmonella can circulate between animals, foods, fish, water and humans. This happens as animals shed feces in the environment which rain water carries to rivers, barrages and channel; aquatic animals like fish can be contaminated by diverse microorganisms coming from water. In addition, wastewater and/or untreated animal feces are used to grow salad and other vegetable from gardens. Here, we can see how humans can be contaminated in this closed circle, since animals can contaminate meat, water, fish, vegetables and environment; the consumers are exposed to a high risk of contamination by Salmonella and other pathogens.
These findings are critical because Burkina Faso is facing serious problems in the area of water and sanitation due to demographic explosion and poor urban planning. This problem is increasing the risk of environmental and human contamination. In Ouagadougou,   the    capital    city    of    Burkina    Faso, wastewater from channel, where we found many Salmonella strains, is used to irrigate vegetables from gardens, and animals’ feces are also used in vegetable crops, which is a new source of growth  for poor people. Vegetables like salad are not nutritive media for microorganisms but can constitute mechanical vectors for transporting microorganisms to humans if hygienic condition in garden is not maintained well.
Based on our findings, as seen in Figure 1, the Salmonella transmission routes are based on their diversity and sources. The diversity of possible reservoirs of infection results in significant challenges for public health authorities to control the infections (Dione et al., 2011). Among the 615 strains, 94% (581/615) were resistant to one or more antibiotics, and resistance to streptomycin was the most common (Table 1). The resistance pattern Str-Sul-Tet, Str-Tet and Str-Sul was dominant and found in 80% of the strains. About 3% of the strains were resistant to 5 or 6 antibiotics; their resistance pattern was amp-str-sul-tet-tmp or amp-chl-str-sul-tet-tmp. One Salmonella strain, S. Kentucky isolated from human stool was resistant to eight antibiotics with the pattern, amp-str-sul-tet-cip-gen-nal-mec. This serotype was found also in fish in this study. In contrast, Centre for Disease Prevention and Control (CDC) has  reported that S. Kentucky is typically found in cattle and poultry (CDC, 2011). 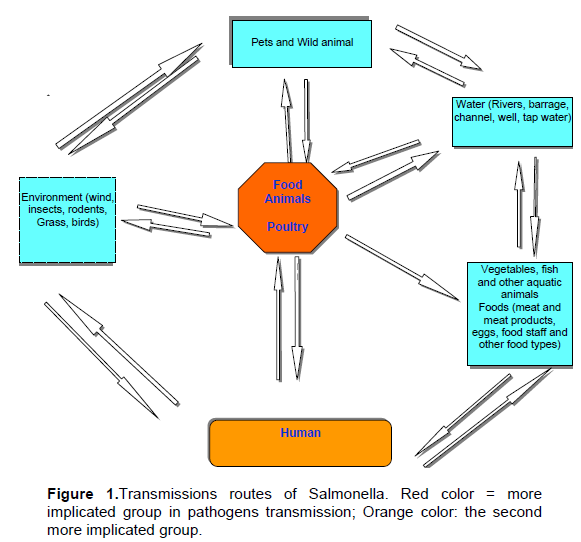 The genetic make-up of the Salmonella strains permits their adaptation in various environments, including human, animal and non-animal hosts. This increases the difficulty in eliminating the bacteria.
Moreover, the emergence of MDR Salmonella strains poses a great challenge in terms of effective treatment of the infections caused by these strains. Several preventive measures have been proposed to stop the spread of antimicrobial resistant Salmonella infections, and the restriction of indiscriminate use of antibiotics in food animals is by far one of the most effective measures. This report can help international organization to understand Salmonella data and trends and to develop more informed solutions for reducing Salmonella contamination along the farm to table chain. The report of sporadic data about Salmonella serotype distribution will highlight the importance of the potential source of Salmonella infection to humans.
The data obtained in this study can be used by the World Health Organization- Global Foodborne Infections Network (WHO-GFN) and public authority to define the guidelines for basic surveillance system of Salmonella and other enteropathogenic bacteria circulating among humans, animals, food and environment.