Midgut symbiotic bacteria are known to play fundamental roles in the biology of mosquitoes, however knowledge of midgut bacterial communities associated with mosquitoes is scanty due to limitation of the isolation techniques based on culturing. In this study, the composition and diversity of midgut bacteria in field collected and lab reared adult female Anopheles gambiae and Culex quinquefasciatus mosquitoes was explored using the Illumina sequencing. Deoxyribonucleic acid was isolated from the pooled midgut extracts and their 16S rRNA gene sequenced using Illumina sequencing platform. Operational taxonomic units (OTUs) were analyzed using QIIME 1.8.0; taxonomy was assigned using BLASTn against SILVA 119 and hierarchical clustering was done using R program software. Out of the total number of sequence reads obtained, 145 OTUs were realized at 3% genetic distance. The 145 OTUs spanned 12 phyla; Proteobacteria, Firmicutes, Cyanobacteria, Euryarchaeota, Gemmatimonadetes, Spirochaetae, Archeabacteria Verrucomicrobia, Chloroflexi, Bacteriodetes, Acidobacteria and Actinobacteria. Microbial community composition based on OTUs showed significant difference between field collected and lab reared mosquitoes (áµª2 = 45.0799, p = 3.2 × 10-5). Similarly, there was a significant difference in community composition at OTU level between Anopheles gambiae and Culex quinquefasciatus (áµª2 = 31.2257, p = 7.7 × 10-4). The bacterial composition and diversity appeared to be influenced by the environment and the species of the mosquitoes.

Mosquitoes transmit diseases like malaria, dengue, lymphatic filariasis, yellow fever among others. Among these diseases, malaria is the most important mosquito borne disease with an estimated 214 million new cases of malaria worldwide (World Health Organization (WHO), 2015). The African region accounted for most of the global cases of malaria (88%), followed by South-East Asia region (10%) and Eastern Mediterranean region (2%) (WHO, 2015). In Kenya, there were an estimated 6.7 million new clinical cases and 4,000 deaths each year and those living in Western Kenya have an especially high risk of malaria (Centers for Disease Control and Prevention (CDC), 2015). Most of the deaths are caused by the parasite Plasmodium falciparum whose major vector in Africa is the mosquito species Anopheles gambiae that is widely distributed throughout the Afro-tropical belt (Boissière et al., 2012).
Another mosquito species Culex quinquefasciatus is the principal  vector for Wuchereria bancrofti, the filarial worm that causes filariasis and Japanese encephalitis (Agrawal and Sashindran, 2006). Lymphatic filariasis is a major public health problem worldwide. It is estimated that 1.3 billion people from 83 countries are living with the disease or are at risk of infection (Agrawal and Sashindran, 2006). Lymphatic filariasis is present on the East African coast especially in Kenya (Njenga et al., 2011).
Current mosquito vector control strategies include insecticide treatment delivered through spraying houses and insecticide-impregnated mosquito nets. While these methods are effective at decreasing mosquito vector numbers, they have also contributed to the rise in insecticide  resistant  mosquitoes (Bando et al., 2013).
Various alternative approaches are being tried to reduce malaria cases in the world, and one such approach is paratransgenesis. Paratransgenesis is a method where by a symbiotic bacteria is used to express effector molecules inside a targeted vector. The symbiotic bacteria are genetically modified to produce effector molecules and then reintroduced into the mosquito to produce the required effect (Chavshin et al., 2012). Understanding the microbial community structure of the mosquito midgut is therefore necessary in order to identify possible bacterial candidates for paratransgenesis. The mosquito midgut plays a critical role to the survival and development of the parasites and is therefore, the most attractive site to target malaria parasites (Whitten et al., 2006). The midgut microbiota of mosquitoes is still not well investigated and a few studies have been carried out on microï¬‚ora of wild caught malaria vectors (Wang et al., 2011).  The available conventional culture techniques limit the scope in determination of the microbial diversity since it sometimes misses out on non-culturable microbes (Pidiyar et al., 2004).
In laboratory-raised mosquitoes, the midgut bacteria can be acquired through contaminated sugar solutions, blood meals and transmitted transstadially. However, in wild mosquitoes, the origin of the midgut bacteria, is still unknown (Riehle and Jacobs-Lorena, 2005). In the current study the bacterial composition and diversity in the midgut of lab reared and field collected A. gambiae and C. quinquefasciatus mosquitoes were determined using the illumina sequencing.

Study site
The study area for field collected mosquitoes was Ahero, Kenya, which is a malaria endemic region. It is located at latitude 0º 11’S and longitude 34º 55’E and is approximately 1153 m above sea level. The area has a tropical climate with significant rainfall throughout the year and with an average temperature of 23.0°C.
Collection of field A. gambiae and C. quinquefasciatus mosquitoes
Adult A. gambiae and C. quinquefasciatus mosquitoes were captured from pit shelters by use of Centre for Disease Control and Prevention (CDC) light traps. The CDC light traps were hung at least one meter above the ground on a tree or pole between 6:00 and 7:00 pm in the evening and left overnight. The collection bags containing the mosquitoes were picked between 6.00 and 6.30 am in the morning. The mosquitoes were then put into vial/jars from the collection bags using mouth aspirators and stored at 4°C. One hundred and thirty eight adult female Anopheles gambiae and Culex quinquefasciatus mosquitoes were identified to species level using a standard morphological key according to Gillies and De Meillon, (1968). The specimens were then transferred to the laboratory at the Institute for Biotechnology Research, Jomo Kenyatta University of Agriculture and Technology (JKUAT).
Acquisition of laboratory-reared A. gambiae and C. quinquefasciatus
One hundred and thirty eight laboratory reared adult female A. gambiae and C. quinquefasciatus mosquitoes were acquired from the International Centre of Insect Physiology and Ecology (ICIPE) Kasarani, Nairobi. They were transferred live to the laboratory at the Institute for Biotechnology Research, (JKUAT) and maintained in a mosquitarium at 28°C and 70 to 80% humidity until dissection. The mosquitoes were offered resins and 1% glucose solution as a source of energy and were not fed on blood.
Dissection of mosquitoes and isolation of DNA
Dissection of mosquitoes was done according to Rani et al. (2009). Before dissecting, the mosquitoes were chilled to death and sterilized with 70% ethanol then transferred into sterile distilled water in a sterile hood. The mosquitoes were dissected individually under sterile conditions. The midguts were mashed and suspended in 100 µl of sterile phosphate buffered solution (PBS). The mashed midguts were ground to homogeneity. Each midgut extract consisted of 20 pooled midguts of adult female mosquitoes. Field collected and lab reared mosquitoes had seven pooled midgut extracts each. The midgut extracts were stored at -80ºC until further analysis.
The total microbial genomic DNA was extracted separately from each group of mosquito midgut extracts using pure link genomic DNA mini kit (Invitrogen), following the manufacturer’s instructions (CAT number, K1820-02 Life technologies, California, USA). Genomic DNA concentration was quantified using a nano drop spectrophotometer and the DNA stored at -20°C until further analysis.
Polymerase chain reaction amplification
Polymerase chain reaction (PCR) amplification of the 16S rRNA gene V4 variable region was carried out on the extracted DNA using primers 515F (GTGCCAGCMGCCGCGGTAA) and 806R (GGACTACHVGGGTWTCTAAT) that had a barcode (Caporaso et al., 2010). PCR amplification was carried out in 30 cycles using the HotStarTaq Plus Master Mix Kit (Qiagen, USA) under the following conditions: 94°C for 3 min of intitial heating, followed by 30 cycles of 94°C for 30 s, 53°C for 40 s and 72°C for 1 min, followed by a final elongation step at 72°C for 5 min. PCR products were visualized on 2% agarose gel to determine the success of amplification and the relative intensity of bands. Multiple samples were pooled together in equal proportions based on their DNA concentrations from the gel images. Pooled samples were purified using calibrated Ampure XP beads (Agencort Bioscience Corporation, MA, USA).
Amplicon library preparation
The pooled and purified PCR products were used to prepare DNA library by following Illumina TruSeq DNA library protocol (Yu and Zhang, 2012). Sequencing was performed at Molecular Research DNA (www.mrdnalab.com, Shallowater, TX, USA) on a MiSeq platform following the manufacturer’s guidelines. The resulting raw sequences were submitted to NCBI (Sequence Read Archive) with the following study accession numbers; sequences for field collected A. gambiae SAMN04386463; field collected C. quinquefasciatus SAMN04386464; lab reared A. gambiae SAMN04386465 and lab reared C. quinquefasciatus SAMN04386466.
Sequence analysis and taxonomic classification
Sequences obtained from the Illumina sequencing platform were depleted of barcodes and primers using a proprietary pipeline (www.mrdnalab.com, MR DNA, Shallowater, TX) developed at the service provider’s laboratory. Short sequences < 200 bp, sequences with ambiguous base calls, and those with homopolymer runs exceeding 6 bp were removed. The sequences were denoised, chimeras and singleton sequences removed (Capone et al., 2011; Dowd et al., 2011; Eren et al., 2011). De novo OTU clustering was done with standard UCLUST method using the default settings as implemented in QIIME Version 1.8.0 at 97% similarity level (Caporaso et al., 2010). Taxonomy was assigned to each OTU using BLASTn against SILVA SSU Reference 119 database at default e-value threshold of 0.001 in QIIME (Quast et al., 2013).
Diversity indices
Diversity indices (Shannon, Inverse Simpson, Evenness), rarefaction, Venn diagram (to compare the shared OTUs between the samples of mosquitoes) and hierarchical clustering were computed, using Vegan package version 1.16 to 32 in R software (R development Core Team (2012). Kruskal-Wallis rank sum test was used to compare the relative abundance of gut microflora among A. gambiae and C. quinquefasciatus from lab reared and field collected samples using R programming language (R development Core Team (2012). Significance was tested at 95% confidence interval (p = 0.05). To support OTU-based analysis, taxonomic groups were derived from the number of reads assigned to each taxon at all ranks from domain to species using the taxa_summary.txt output from QIIME pipeline Version 1.8.0.

Assemblage and diversity of the microbial communities
After removing chimeras, denoising and demutiplexing, a total of 24,025 sequence reads greater than 200 bp were attained from the 16S rRNA data. Total OTU richness at 3% distance amounted to 145. The OTUs per data set ranged between 26 and 102. OTUs comprised 87% bacteria, 0.7% Archaea, 2% Fungi, 1.4% Eukarya and 8% no blast hit (sequences reads that were not assigned). Rarefaction curve was plotted in order to evaluate if all the diversity within the samples had been exhaustively recovered (Figure 1). 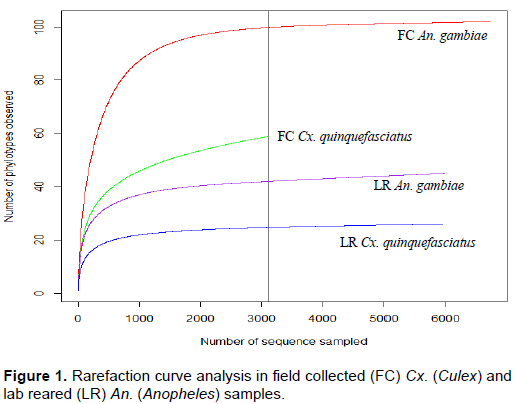 The slopes of the curves flatten out in cases where full diversity has been detected. This indicates that even if more sequences were obtained, the number of OTUs detected in the samples would not increase. However, more sequences would be required to exhaust the full diversity within the samples if the slopes did not flatten out (Chao et al., 2014). The sequencing depth as shown by the rarefaction curve was exhaustive enough to ensure the inclusion of the entire diversity of the microbes in the midgut of the two species of mosquitoes collected from field and lab reared.
The distribution of shared OTUs across the two species of mosquitoes and the sample source (lab reared and field collected) is shown in (Figure 2). Seven OTUs were common in all the samples, fifty four (54) OTUs were only found in field collected A. gambiae while 18 OTUs were detected only from the field collected C. quinquefasciatus samples. Lab reared C. quinquefasciatus and A. gambiae samples had one and 10 unshared OTUs respectively. 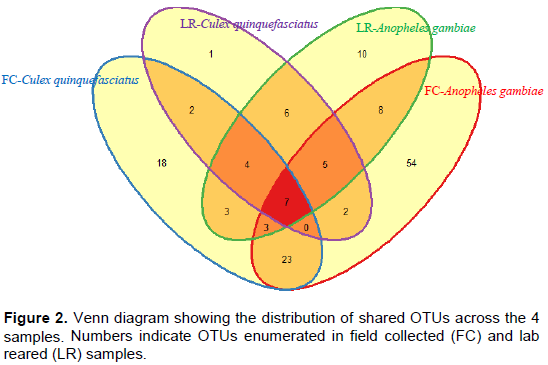 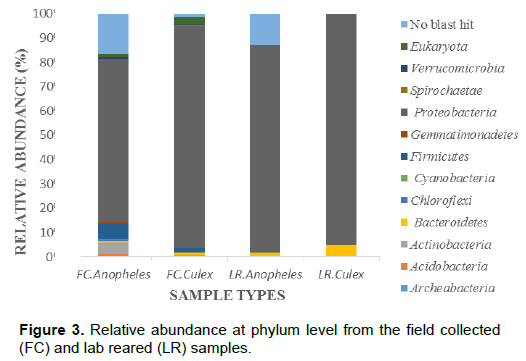 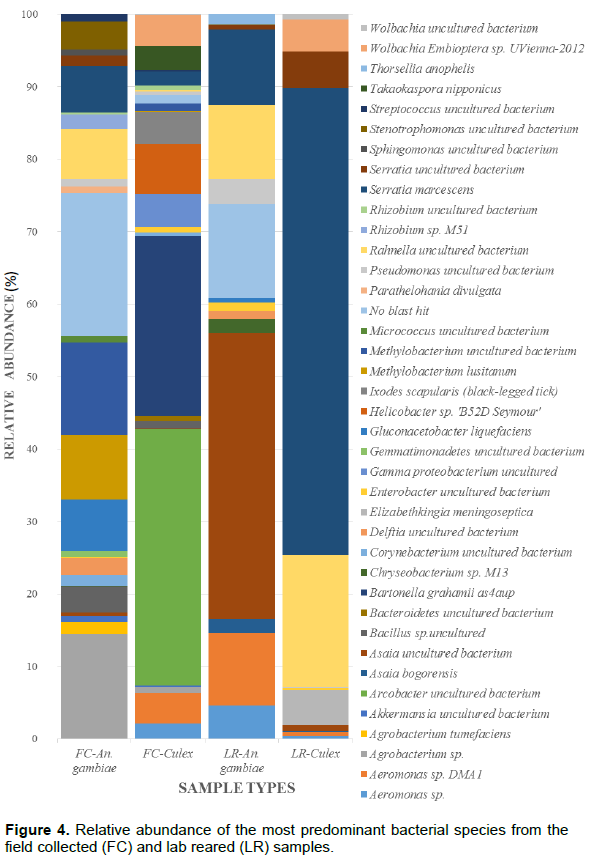 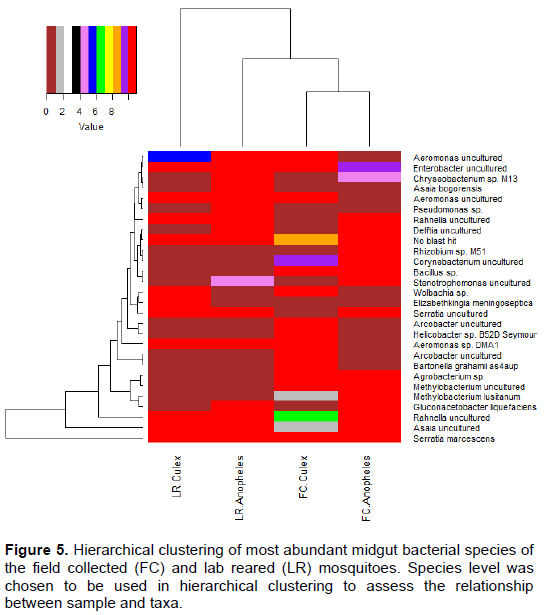 The results obtained present an analysis of the composition and bacterial diversity of lab reared and wild mosquitoes using Illumina sequencing technology. The bacterial flora of adult female A. gambiae and C. quinquefansciatus midgut is diverse and is dominated by bacterial species S. marcescens. In future, understanding the tripartite  mosquito-microbes-parasite interaction will enable us gain more insight that may be useful in the development of novel approaches  for the control of malaria and other mosquito borne diseases like  filariasis, dengue, Zika and Chikungunya.