The microbial community structure from dark earth in a native archaeological site of the Lower Amazon was analyzed by PCR-DGGE, using 16S rRNA gene for prokaryote population and 18S rDNA and ITS regions (using clamp GC) for the eukaryote population. The bands were excised from gel and re-amplified for sequencing. The diversity found according to the region of amplification showed same profiles for the two primers pairs. The bacteria genus were: Bacillus, Klebsiella, Pantoea, Enterobacter, Lactobacillus, Escherichia, Leuconostoc and actinobacterias as Streptomyces and Microbacterium. Among the fungal community was Zygosaccharomyces, Lachancea, Saccharomyces, Cladosporium, Candida, Penicillium and Uncultured ascomycota and zygomycete were found. Molecular approaches revealed microbial groups that have never been reported in Lower Amazon soil as the Leuconostoc mesenteroides, Lactobacillus casei and Lactobacillus paracasei bacteria’s and Lachancea meyersii yeast. The soil pH was ~6.5; the soil had high levels of minerals with exception of Na (not detected) and Al (~0.2 mg/dm3). The organic matter was 3.5 dag/kg. This study also shows that the Amazon soil is rich in minerals. This can be an important factor in the species richness in the Amazon region. The present data show that the Lower Amazon represents a vast resource for the biotechnology area.

The soils are biodiverse ecosystems. Microorganisms are a component of these ecosystems (Pereira et al., 2006). Microorganisms are involved in biodegradation, decomposition and mineralization, and inorganic nutrient cycling in soils.
The Amazon soil contains great unexplored ground. The Terra Preta are anthropogenic soil (Lehmann et al., 2003) which are fertilized through increasing the cation exchange capacity and the nutrient content (Lehmann et al., 2003; Kim et al., 2007).
The microbial diversity present in Amazon soils is little known. Therefore, the Brazilian government provides financial support for research. The application of molecular techniques in the microbial diversity and structure analysis of these communities has been used previously (Bossio et al., 2005; Pereira et al., 2006; Castro et al., 2008; Taketani et al., 2013; Brossi et al., 2014). The molecular approaches have been proven to be powerful tools in providing an inventory of the microbial diversity in environmental samples (Ascher et al., 2010; Silva et al., 2012).
The assessment of diversity in Amazon soil is an important aspect in the quest for maintenance of soil biodiversity (Brossi et al., 2014). A characterization of the bacterial and fungal microbial community associated with Amazon soil from dark earth in a native archaeological site of the Lower Amazon is lacking. Furthermore, it is likely that richness of these bacterial and fungal communities is affected by anthropogenic modification of environment. The objectives of this study were: Firstly, molecular survey of the bacterial and fungal communities associated with Amazon soil, based on the sequencing of different    rDNA  regions,  and  secondly  to  analyze  the physicochemical characteristics of this soil. 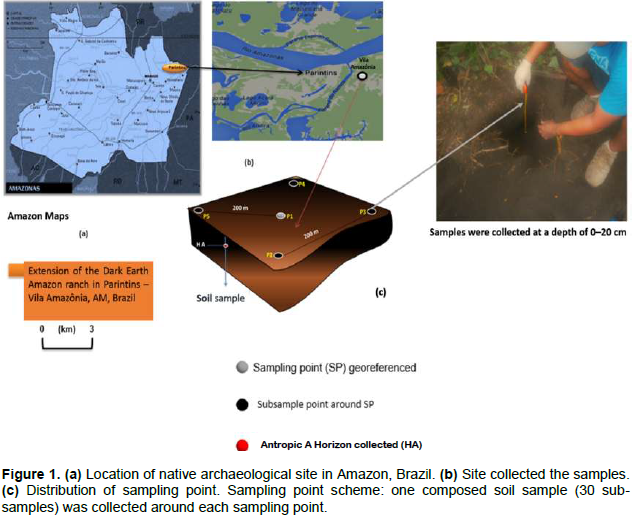 Composited samples were collected at a depth of 0 to 20 cm. The soils were stored in sterile Nasco® plastic in 4°C bags for further use.
DNA extraction and PCR-DGGE
Sample (approximately 0.25 g soil wet weight) of soil was used for DNA extraction by using a NucleoSpin Tissue kit (Macherey-Nagel, Düren, Germany). Total DNA was used for PCR amplification of prokaryote and eukaryote ribosomal target regions, for PCR-DGGE analyses. Two primers sets were used for the microbial population. Primers and analysis conditions are given Table 1. 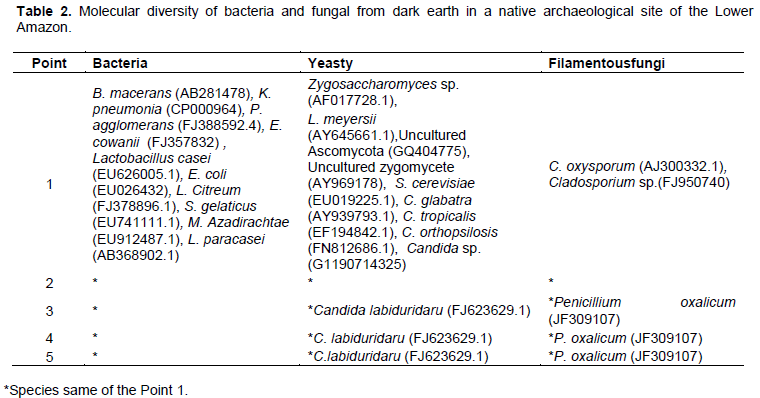 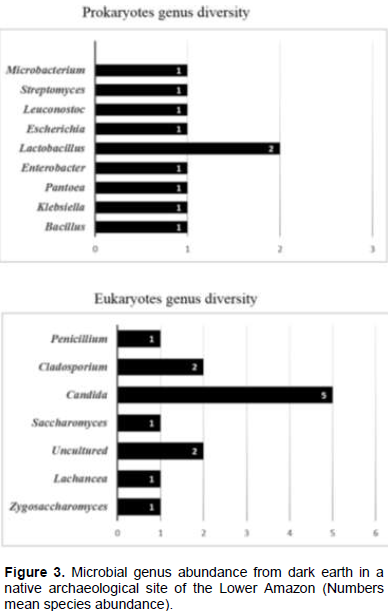 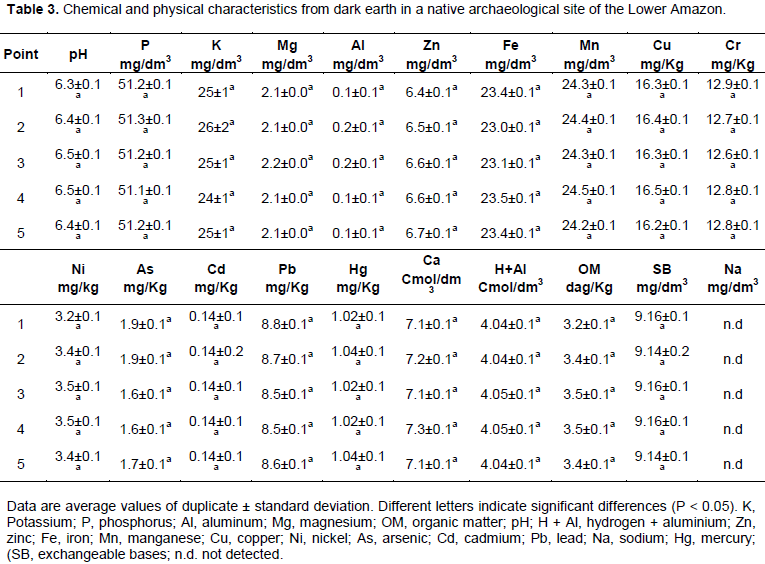 Studies of microbiota and soil chemistry show that the fertility of anthropogenic soils results from combination of mineral and organic components (Navarrete et al., 2010; Taketani et al., 2013). The microbial population profiles can be dependent on the PCR primers used (Anderson and Cairney, 2004; Schwarzenbach et al., 2007). When Amazon soil samples were subjected to analysis by PCR-DGGE, important information became available. Species present in low concentrations can be detected by PCR-DGGE (Pereira et al., 2011).
The results show that the eukaryote population in the Amazon soils reveals a microbial diversity, Aspergillus sp., Penicillium sp., Trichoderma sp., Zygosaccharomyces sp. Lachancea sp., Saccharomyces sp., Cladosporium sp., and Candida sp. The large variability is due the incorporating of different types and quantities of organic matter (Bissett et al., 2013). Recently, Bresolin et al. (2010) observed microbiota present in Brazilian Cerrado soil using DNA analysis by PCR-DGGE.  The microbial species isolated were related to Uncultured soil fungus and Uncultured soil bacteria. Schwarzenbach et al. (2007) observed the presence of Ascomycota yeasts in sandy loam soil sample situated in Central Switzerland.
Among the genus and species of yeast and fungi found in this study; Lachancae meyersii is the first species in the collected genus from Amazon soil. According to Fell et al. (2004), all of the isolations of the other species of Lachancea have been from plants, plant products or plant-associated insects, fruits or food. The specific ecological niche of L. meyersii has not been determined. Zygosaccharomyces is a yeast genus as synonymous with spoilage. Zygosaccharomyces includes osmotolerant (Thomas and Davenport, 1985). These characteristics of resistant microorganisms to different environments are related to presence in soils. The Cladosporium genus constitutes one of the largest genus of Hyphomycetes (Mukherjee and Mittal, 2005). Cladosporium grows when there is not enough ventilation; sometimes on walls and wallpaper in rooms (Mukherjee and Mittal, 2005).  However, recent data suggest that they are present in soil samples (Paul et al., 2008). The Candida genus is commonly found in soils in forest soil in Taiwan including the new species Candida jianshihensis, Candida yuanshanicus, Candida dajiaensis and Candida sanyiensis (Meyer et al., 1998). Shin et al. (2001) also found Candida genus in Korean soils.
The obtained results showed the presence of several bacterial species in Amazon soil (Figures 2 and 3 and Table 2). The   bacterial  species  Bacillus  sp.  commonly
are found in soil samples (Quirino et al., 2009).
Klebsiella, Enterobacter, Pantoea, and Escherichia genera were found in this study. These genera are found naturally in soil, water, and plants (Quirino et al., 2009). Leuconostoc and Lactobacillus genera are not commonly found in soil, however it was found in this study. The presence of this specie in soil is associated with plants and fruits present in vegetation Amazon.
This study also showed the presence of actinobacterias as Streptomyces gelaticus (EU741111.1) and Microbacterium azadirachtae (EU912487.1). Actinobacteria are genus colonizers in soils. Many species produce enzymes for degradation of cellulose, chitin and, in part, starch. Actinobacteria often occur in degraded organic materials (Schäfer et al., 2010). In the present work, the Streptomyces genus was also found. The Streptomyces genus is focus of research because of the produced substances and has been modified with advances in molecular biology (Souza et al., 2008). Microbacterium genus can be isolated from air, soil and water. Many Microbacterium spp. play a significant role in oil, lactone and xylan degradation, production of bio-surfactants, and as a growth promoter in plants (Lin et al., 2012).
The soil physico-chemical properties are important and how these properties could be related to microbial profiles in different soils must be evaluated (Peixoto et al., 2010). The properties affect the native microbial populations (Bresolin et al., 2010). This study showed small amounts of aluminum in the Amazon soil (Table 3). High quantities of aluminum in the soil promote the soil impoverishment (Ruggiero et al., 2002). This study also showed the Lower Amazon soil is rich in minerals. This can be an important factor in the species richness in the Amazon region.

In summary, this research has furthered our knowledge about microbial community structure and chemical composition of archaeological site of the Lower Amazon. The application of PCR-DGGE technique based approaches for prokaryote and eukaryote population analysis has confirmed that microbial ecosystems of Amazon soil support a wide diversity of microorganisms that may be responsible for some characteristics these soils. On the other hand, molecular approaches revealed microbial groups that had never been reported in native archaeological site of the Lower Amazon as the Leuconostoc mesenteroides, Lactobacillus casei  and Lactobacillus paracasei bacteria’s and L. meyersii yeast.
The data presented adds important information that will help future studies in these environments.

The authors acknowledge the CNPq, CAPES, FAPEAM and FAPEMIG for financial support.