Hepatitis E virus (HEV) is a cause for public health concern in many developing countries where sanitation conditions are poor. Increasing attention has been focused on the zoonotic nature of HEV. Goats, along with other species of small ruminants have been reported to be susceptible to HEV infection. This study was designed to determine the infection rate of HEV3 by detecting antibodies against capsid proteins of HEV genotype3 in goats from Sokoto using indirect enzyme linked immunosorbent assay (ELISA). An overall infection rate of HEV3 27.84% (49/176) was recorded in the study. Goats, one year and above, had a prevalence of 32.56% (42/129) while those below the age of one year showed a prevalence of 14.89% (7/47). Their was a statistical significant association beween age and HEV3 infection (P-value<0.05). However, the infection was not significantly associated with breed and sex (P-value>0.05). It was concluded that goats from Sokoto are exposed to HEV3 infection. Goats older than one year appeared to be more exposed. It is suggested to study other domestic animals to determine the magnitude of HEV infection as well as carry out detailed molecular characterization of the virus to evaluate the epidemiological pattern of the virus infection in all domestic animals in the area of this study.

Hepatitis E is a disease caused by infection with hepatitis E virus (HEV), an RNA virus that exists in both enveloped and non-enveloped forms and was first recognized in the early 1980s. The virus is a member of the Hepeviridae family and the genus Orthohepevirus. At least 4 mammalian genotypes  (1 to 4) belonging to a single serotype  are   recognized   by    Perez    et    al.   (2015). Genotypes 1 and 2 are found only in humans, whereas genotypes 3 and 4 have also been found in several mammalian species. The virus is relatively stable in the environment and is sensitive to heat, chlorination, and ultraviolet light (Perez et al., 2015).The viral genome contains three non-overlapping open reading frames (ORF 1-3) (Di-martino et al., 2017). Open  reading  frame 1 codes for the non-structural protein like helicase, ORF2 codes for the viral capsid protein which is the target of neutralizing antibodies against HEV. ORF3 codes for the multifunctional phosphoproteins that modulate cellular activities.
Clinical features of hepatitis E are indistinguishable from acute hepatitis caused by other hepatotropic viruses. The incubation period ranges from 15 to 60 days, with a mean of 40 days. Hepatitis E virus infected persons exhibit a wide clinical spectrum, ranging from asymptomatic infection through acute hepatitis to fulminant hepatitis (Kamar et al., 2008). Certain population sub-groups are at a higher risk for severe disease following HEV infection. This includes pregnant women, persons with pre-existing liver disease and persons with immunosuppression (Teshale et al., 2010).
Several studies have shown that pigs, sheep and goats amongst others can serve as reservoir hosts for HEV infection all over the world (Perez et al., 2015; Di Martino et al., 2016; Long et al., 2017). Antibodies against HEV genotype 3 has been detected in domestic animals all over the world. In pigs from Brazil (Santos et al., 2009), in sheep and goats from Egypt (Elâ€Tras et al., 2013), in cows from China (Huang et al., 2016), in goats from the United States (Sanford et al., 2013), and sheep from China (Wu et al., 2015).
Recent studies have shown that there is evidence of HEV infection in Nigeria. Alkali et al. (2015), studied the prevalence of HEV genotype 3 in pigs from Zaria, Kaduna State, Nigeria and recorded a prevalence of 24.4%. In another study carried out by Junaidu et al. (2014) in domestic animals (pigs, goats and sheep) from Jos, Plateau State a prevalence rate of 24.1% was recorded. In Cross-River State, Nigeria, a sero-prevalence rate of 7.7% was recorded in children by Ekanem et al. (2015).
The evidence of non-A and non-B hepatitis in humans is of increasing concern  (Goens et al., 2004). Very little information to the best of the authors knowlege is available on the sero-prevalence of HEV3 infection in the study area.
Determining the existence of HEV3 infection in goats which is a major source of meat in the study area, will provide baseline information for further studies. The findings from this study will hopefully assist policy makers and veterinary health authorities in devising effective and applicable control measures in the study area.
This study was designed to determine the infection rate of HEV genotype 3 in goats and to determine the association of this infection with sex, age and breed.

Epidemiological study was conducted from Jauary 2017 to March 2017 in Sokoto metropolis area in the Sokoto State as shown in Figure 1. Systematic random sampling technique was used in this study. 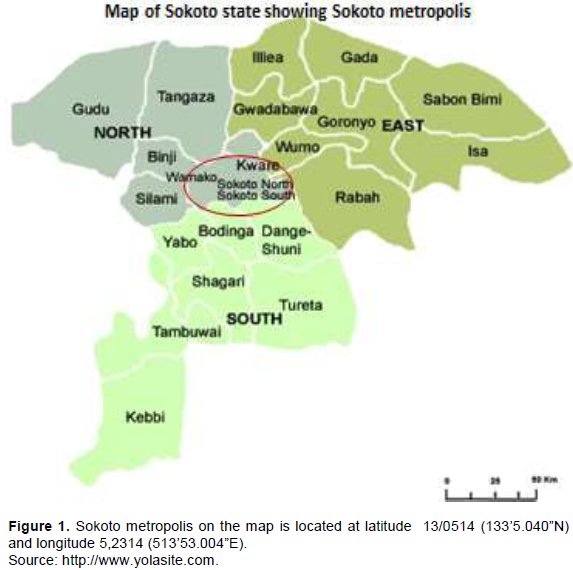 Samples were drawn from each fifth animal with the first animal also being chosen at random. According to Ngere et al. (1984), there are three breeds of goat in Nigeria: Sahel (Sh), Red Sokoto (RS), and West African Dwarf (WAD) of which two of these breeds were sampled in this study. Blood samples were collected from goats brought to the State Veterinary Clinic, Aliyu Jodi Road and from backyard farms and within the metropolis. After proper restrain, 5 ml of blood was collected from the jugular vein of each animal sampled using a 5 ml syringe and transferred into a sterile plain vacutainer test tube and transported in an ice pack to Usumanu Danfodiyo University, City Campus Central Research Laboratory, Sokoto. The samples were kept on the bench for 60 min to allow for coagulation and seperated with a centrifuge at 3000 rpm for 10 min. The supernatants (sera) were carefully decanted into a 1 ml serum vial and preserved at -20°C until used.
Indirect enzyme linked immunosorbent assay (ELISA) kit from Innovative Diagnostic Vet© Montpellier, France was used to detect anti-HEV genotype 3 capsid protein antibodies in serum and plasma of goats and other species. Samples and controls were deposited in duplicate. One hundred and ninety microliters of sample dilution buffer was added to each well. Ten microliter of negative control was added to wells A1, A2, B1 and B2. Ten microliters of positive control to wells C1, C2, D1 and D2. Ten microliters of each sample was transferred to the remaining wells. Micro-plates were incubated for 45 min at room temperature (26°C). Wells were emptied by inversion and three cycles of manual washing was carried out. One hundred microliters of multispecies conjugate (1X) was added to each well. The plates were incubated for  about 30 min at room temperature (26°C). Micro-wells were emptied and each well was washed with 300 µl of wash solution. One hundred microliters of substrate solution was added to each well, incubated for 15 min at room temperature (26°C). The reaction was stopped by adding 100 µl of stop solution (H2SO4) to each well. The absorbance of each sample was measured using a 96 wells spectrophotometer at a wavelength of 450 nm. The test was validated as recommended by the manufacturer and percentage sample to positive ratio (S/P) was calculated. Samples presenting S/P ratio of greater than 70% was considered positive, between 60 and 70% was considered doubtful and less than 60% was considered negative.
Sample size determination
The sample size was determined using a previous prevalence 10.5% (Junaidu et al., 2014) at 95% confidence interval, with desired precision of 5%, using the formula (Thrutfield,  2005):
n = z2x pexp(1-pexp) / d2
where n = sample size, z = score for a given interval which is 1.96 (SE) at 95% confidence interval, pexp = prevalence at 10.5%, and d2 = precision at 0.05 (Junaidu et al., 2012).
n = (1.96)2 × 0.094 × (1-0.094) / (0.05)2
n = 0.26711 / 0.0025 = 106.84
Thus, n = 106.84 Sample size was adjusted to 176 to improve the chance of detection.

Data analysis
The results were recorded uing microsoft excel, presented in a table format, and Chi square test was used to test for association between  sero-prevalence  and  epidemiological  variables  such  as health status, breed, age and sex at 95% CI. The analysis was done using SPSS version 21.0 considering probability value <0.05 as significant.

HEV is a cause for public health concern in many developing countries where sanitation conditions are poor and waterborne epidemics are frequent. Both epidemic and sporadic forms of HEV infections exist in developing and under-developed countries. Pigs are the principal reservoir of HEV. However, goats have also been reported to be highly seropositive for anti-HEV IgG (Perez et al., 2015).
Here, the concentration was particularly on the food habits of the local inhabitants of Sokoto State, of whom the majority are Hausa-Fulani and the continuous contact of the inhabitants within the study area with goats. Goat meats and other small ruminants are common in their diet.
In this study, the infection rate of HEV3 was 28.7% and this percentage corroborates with results of several studies done in China such as Geng et al. (2014) and Zhang et al. (2010) who found 28.2 and 24% infection rate, respectively and lower than that reported in United States 16% (Sanford et al., 2013) and in Egypt 9.4% (El-Tras et al., 2013). A higher prevalence of 37.2% has been recorded in Plateau State, Nigeria (Junaid et al., 2014).
The findings in this study showed that male goats had a higher infection rate 31 (32.9%) and female had a lower number of positive samples of 18 (22.5%) and not statistically significant. This validates the findings of Sarah et al. (2013) who found no significant association between HEV infection and sex in pigs. However, our results are not in accordance with the findings of Alkali et al. (2015) who observed a significant statistical association between sex and HEV infection (p<0.05) in pigs.
Nevertheless, in order to fully  comprehend  the  role  of sex in the epidemiology of the disease, further investigations involving a larger population of goats are needed.
Regarding the age, the results of the present study show that goats, one year or older have a higher infection rate 32.56% (42/129), than younger goats 14.89% (7/47). Chi square analysis shows statistical significant association between HEV infection and age in goats (p-value<0.05). The outcome may be because sero-prevalence may increase with age as a consequence of repeated contact with the virus. The comparison made between breeds of goats showed that Red Sokoto goats had a higher prevalence of 33.33% (27/81) while Sahel goats had lower prevalence of 28.4% (22/95). Chi square analysis did not show any statistical significant association between HEV infection and breed (p-value >0.05). The difference observed between the breed groups in sheep and goats might be due to the sampling ratio. HEV genotype 3 infection is influenced by sex and sero-prevalence increases with age.
Goats may act as source of exposure for HEV infection in the study area, thus veterinarians and other individuals with extensive contact with goats may be at risk of being infected with HEV. Breed had no consequence on the prevalence of HEV infection. This outcome simply implies that all the breed tested in this study are susceptible to HEV3 infection.
The results show the need for the use of a more sensitive and specific technique like PCR to clarify the distinct pattern of HEV3 distribution and the extent of cross-species transmission. Better information to the public by veterinary health authorities will be required to help prevent current and future endemics. Good hygiene practices among people with extensive contact with goats might  help to prevent future occurrence of the infection.