Evaluation of cypermethrin insecticides on the growth of some selected soil bacteria isolated from Makurdi, Middle Belt, Nigeria

In the present investigation, a total of 30 soil samples were collected from five different sites in Makurdi metropolis to investigate the effect of cypermethrin on some soil bacteria. Physicochemical properties of the soil samples from various sites were determined using standard procedures. Some selected soil bacteria such as Escherichia coli, Klebsiella spp., Bacillus spp., Staphylococcus spp. and Proteus spp. were isolated by the use of serial dilution and pour plating method. The percentage prevalence of Isolates shows that a total of 10 bacteria were isolated with samples from high level accounting for 50% of the isolates, North bank 30% and Wurukum samples 20%. Klebsiella spp. accounted for 30% of the isolates, Escherichia coli 10%, Staphylococcus and Bacillus spp. accounted for 20%. The resistance pattern of the isolates at different concentration (1-3%) of cypermethrin showed that all the isolates could grow in the presence of cypermethrin at 1% except Bacillus spp. However at 2%, only Klebsiella spp. grew; Staphylococcus spp., Escherichia coli and Bacillus spp. were inhibited and therefore showed no growth. These findings revealed that cypermethrin had effects on the soil bacteria at higher concentration inhibiting their growth but tolerated at lower concentration. Therefore, indiscriminate use of insecticides should be avoided and more eco-friendly means of pest control should be employed to reduce the negative impact of synthetic pesticides on beneficial soil organisms.

Soil is the uppermost layer of the earth; it is naturally occurring physical covering of the earth’s crust. The earth crust includes solids, liquids and gases. So soil is made up of the combination of geological parent materials, glaciers among others (Azhar et al., 2013). Diverse species of bacteria, archaea, fungi, insects, annelid and some invertebrates as well as  plants  and  algae  inhabit the soils. Thus, soils are the foundations of all terrestrial ecosystems and harbor vast microbial diversity. According to the previous findings, the total weight mass of organisms below temperate grassland can exceed 45 tons per hectare, equaling or exceeding above ground biomass out of which bacteria are present in great numbers  with archae  10-fold  less  (Ritz et al., 2003). An estimated number of bacteria per gram of soil range from 2000 to 18000; while fungi on the other hand contribute to a great extent the largest portion of the population of soil microbiota (Azhar et al., 2013; Aislabie and Deslippe, 2013).
Microorganisms have ability to grow in the presence of many pesticides. Thus, they play quite a number of roles in the soil. Nonetheless, haphazard application of pesticides often leads to environmental hazard to soil microbiota as well as physico-chemical properties of the soil (Pal et al., 2006). The use of pesticides is no longer new in controlling pest, especially insect pest in agriculture. The use of these pesticides in agricultural soils usually has adverse effects on soil microbiota metabolic activities. This also influences the biological activities especially biochemical reaction of the soil flora and fauna under the influence of the pesticides (Madakka and Rngaswamy, 2009; Baxter and Cummings, 2008; Li et al., 2008; Mahia et al., 2008). So, low concentration of these chemical (pesticides) can still affect the soil microbiota. The effects of insecticides can decrease the soil microbes quantitative by altering the soil biochemical activity, and qualitative by decreasing the microbial population in the soil (Cycon et al., 2006, 2010; Vig et al., 2008).
Soil flora and fauna is difficult to determine because many variables such as habitat, soil structure, organic and inorganic composition, texture, pH and temperature should be taken into consideration despite the effect of the soil pesticide or insecticide on the soil (Monkeidje et al., 2002; Beulke et al., 2004). With regards to the application of pesticides in agricultural soil, there is tendency for transformation in biological and non-biological processes whereby one or more products are eventually formed. These transformation products are carried out by different mechanisms physical, chemical and biological agents in which microbes have an important role to play. Even though mechanisms of pesticide degradation in soil may be either abiotic or biotic in nature; degradation by living organisms (biotic) has received much attention (Hafez and Thiemann, 2003).
Dated back to the1980s, cypermethrin had been used in agricultural set up. It is a pesticide which has brought solution in controlling many pests affecting plants. Cypermethrin is a synthetic pesticide usually used in agriculture, forestry, horticulture and urban regions to control insects and pests of cotton, fruit and vegetables (Akbar et al., 2015; Tallur et al., 2008). It has been so useful in the control of pests in stores, warehouses, industrial buildings, termites in houses, laboratories, treatment of ectoparasitic infestations of cattle and other livestock, food processing plants, to kill cockroaches, fleas and insects on cotton and lettuce. The chemical name of cypermethrin is [Cyano-(3-phenoxyphenyl) methyl] 3-(2, 2-dichloroethenyl)-2,2-dimethylcyclopropane-1-carboxylate and its molecular weight is  416.30  g/mol  (EPA, 1992). Cypermethrin has poisonous effects at low concentrations of about 10 μg/L in an aquatic habitat (Vinodhini and Narayanan, 2008). Therefore, physico-chemical properties of soil are based on the environment of the soil which varies from 14.6 to 76.2 days (half-life) (USDA, 1995). Studies have shown that due to the non-polar nature and low water solubility of cypermethrin, it is usually adsorbed on to soil surface (Liu et al., 2005).
Cypermethrin has effects on vertebrates and invertebrates nervous system by producing hyper excitable state and damaging the voltage dependent sodium channels. the degrading microorganisms for Cypermethrin (CY) were Pseudomonas aeruginosa, Klebsiella spp., Bacillus subtilis, Rhodococcus spp., Micrococcus spp., Serratia spp. arebacteria, while fungi consist of Aspergillus terreua, Monilochaetes and Fusarium, Alcaligenes spp. (Deng et al., 2015).
Further investigation revealed the kinetic parameters of the degradation of CY by Aspergillus terreua under the effects of different factors. The particular strain could degrade CY validly over a range of temperatures (25-35°C) and pH (6.0-8.0); so, pesticide-degrading bacteria had advantages in the environment due to the favorable temperature and pH scale (Deng et al., 2015). This research work evaluates the effect of cypermethrin on the growth of some selected bacterial species of agricultural importance isolated from soil. 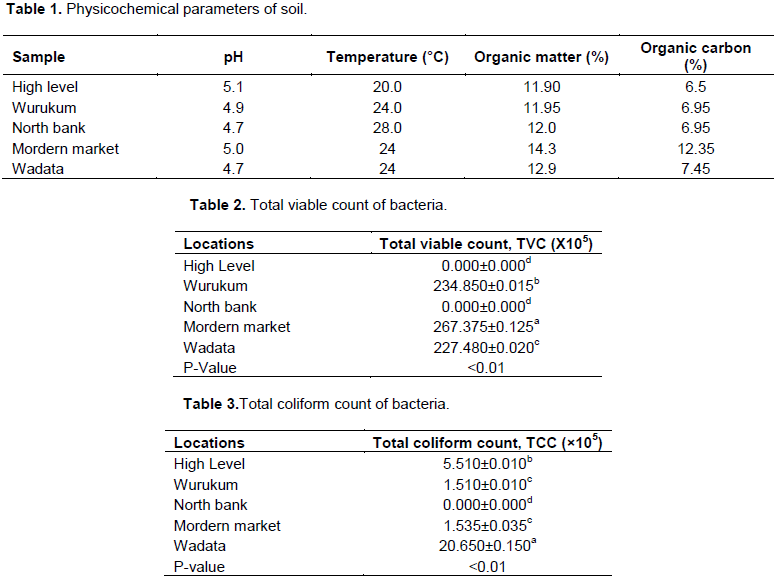 Table 4 shows the cultural, morphological and biochemical characteristics of isolates. Isolates were identified based on colony color, shape, morphology, Gram’s reaction, biochemical test such as catalase, citrate, indole, oxidase and urease. Staphylococcus spp., Escherichia coli, Bacillus spp., Klebsiella spp. and Proteus spp. were all isolated and identified.
In Table 5, the percentage prevalence of isolates shows that a total of 10 bacteria were isolated with samples from High level, accounting for 50% of the isolates, North bank 30% and Wurukum samples 20%. Klebsiella spp. accounted for 30% of the isolates, E. coli 10%, Staphylococcus and Bacillus spp. all accounting for 20% respectively.
Finally, the  sensitivity  of  isolates  to  cypermethrin  at different concentration is presented in Table 6. From the result, Klebsiella spp. was resistant to cypermethrin at 1 and 2%, but susceptible at 3%. E. coli and Staphylococcus spp. were both resistant at 1% but susceptible at both 2 and 3%. However, Bacillus spp. was susceptible at 1%. The physicochemical parameters of the soils revealed that samples from the different sites had pH range of 4.7 to 5.1, organic matter content ranging from 6.95 to 12.9, organic carbon ranging from 6.5 to 14.3 and temperature ranging from 20 to 28°C. 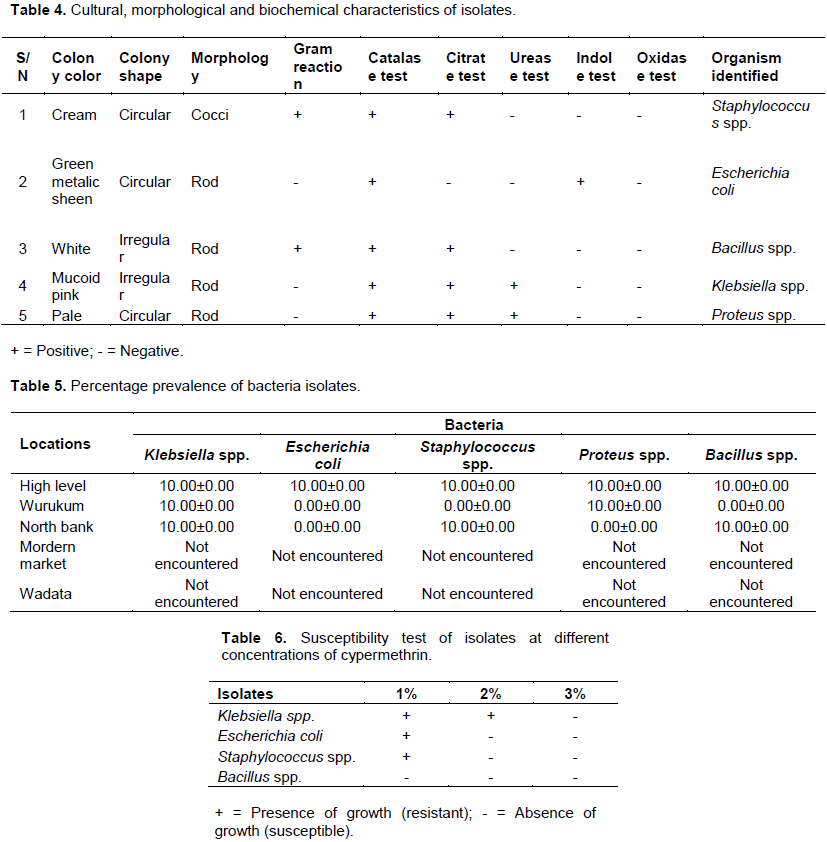 Studies have shown that the physicochemical parameters of soil affect the activities of microorganisms (Ashim et al., 2008). Soil properties like organic matter, clay content, pH, temperature, affect the degradation of pesticides in soil. It is pertinent to study their effects on soil microorganisms which are the chief degraders of pesticides.  Gold et  al.  (1996)  reported that soil pH and clay content greatly affected the persistence of bifenthrin, chlorpyriphos, cypermethrin, and fenvelerate under field conditions. Microbial activity is stimulated by increase in temperature and some ecological groups tend to dominate within certain temperature ranges. The maximum growth and activity of microorganisms in soil occurs at 25-35°C (Alexander, 1977) and pesticide degradation is optimal at mesophilic temperature range of around 25-45°C (Topp et al., 1997). Soil organic matter process enhances microbial activity by cometabolism (Perucci et al., 2000).
The total viable count of bacteria in various sites reveal that samples from Modern market had the highest count with 267.5×105±10.6×105 followed by samples from Wurukum with 235×105±7.1×105. Wadata samples had counts of 227.5×105±3.5×105. Samples from North bank and High level had no growth. Total coliform count shows that samples from Wadata had counts of 20.5 ×105±0.71 × 105; samples from High level had counts of 5.5×105 ± 0.71×105 while samples from Wurukum and Modern market area had counts of 1.5×105± 0.71×105. Samples from North bank however showed no growth.
In this study, percentage prevalence of isolates showed that about 50% of the isolates were from High level samples, while Wurukum and North bank samples had 20 and 30% isolates respectively. Other isolates from Wadata and Modern market got contaminated and therefore not suitable for use. The bacteria isolates includes Klebsiella spp., E. coli, Staphylococcus spp., Bacillus spp. and Proteus spp. However, Pseudomonas was not isolated from the soil. Similar bacteria were used by Radhika and Kannaiah (2014) to test their ability to remediate cypermethrin.
The result of this investigation showed that four different bacteria genera showed different resistant capacities to various doses of the commercial insecticide cypermethrin. At lower concentration of the insecticide, it was observed that almost all the bacteria isolates were resistant and could grow. However at higher concentrations of the insecticides there was a marked inhibition in the growth of the isolates as compared to the control test. These results are similar to that reported by Radhika and Kannaiah (2014).
Murugessan et al. (2009) observed that at 0.3% concentrations of cypermethrin, Corynebacterium and Bacillus spp. could grow and degrade cypermethrin, but at higher concentration, they were inhibited. The growth of Pseudomonas aeruginosa, Klebsiella spp. and E. coli were reported to grow at 1% concentration of cypermethrin. In this research, the effects of cypermethrin insecticides at concentrations ranging from 1-3% were carried out. So, the result showed that E. coli and Staphylococcus spp. were able to grow at 1% concentration of cypermethrin, Klebsiella spp. was able to grow to 2% of the concentration of the insecticide but was inhibited at 3%. Bacillus spp. however was not able to grow at 1% concentration of the insecticide. This finding corroborates with that of Al-Rasslany et al.  (2010)  who observed that microbial population suffered significant decrease after 7 days of cypermethrin exposure.

From this study, some selected group of bacteria (Klebsiella spp., E. coli, Staphylococcus spp.and Bacillus spp.) were isolated and it was observed that at lower concentration of cypermethrin (1%), some soil bacterial isolates (Klebsiella spp., E. coli, and Staphylococcus spp.) were resistant to it and could tolerate their presence and grow, being able to degrade it. However, cypermethrin had a negative impact on the growth of the selected soil bacteria (Staphylococcus spp., Klebsiella spp., E.coli, and Bacillus spp.) at higher concentrations. Klebsiella spp however, was found to be more resistant to it and could grow and degrade cypermethrin at 2% concentration.  Therefore, soil microorganisms play key roles in the environment which include decomposition processes, biochemical cycling, energy transfer through trophic levels and numerous microbes-microbes interactions, microbes-plant and microbes-animal interactions. It is recommended therefore that, the use of insecticides should be controlled, as higher concentration of insecticides such as cypermethrin is toxic to soil microbes. It is also recommended that, all insecticides should be treated in the soil and their bactericidal and bacterostatic effect be tested prior to approval for commercial sales and labeling by the Environmental Protection Agency (EPA), in-vivo experiments should be carried out on field where cypermethrin has been applied according to the manufacture’s specification and their effect on microbial load ascertained over a given period. In addition to this, government and non-governmental agencies should place ban on the use of chemical substances used as insecticides which are hazardous to the environment and health of humans in the long run due to bioaccumulation. Also, strict compliance should be ensured by both producers and distributors, and defaulters be punished by the law enforcement agencies.