Fresh and unpasteurized fruit juice is common in restaurants, cafeteria, hotels and juice house of Ethiopian cities. Most fruit juices contain sufficient nutrients that could support microbial growth. The current investigation was carried out to investigate the microbiological quality and processing conditions of fruit juice vended in Shewarobit town. Purposive sampling technique was employed to collect sixteen fruit juice samples comprising of eight avocado and eight papaya from five cafeterias and three restaurants of Shewarobit town from November 2017 to January 2018. A wide mouth sterile bottle was used to collect fruit juice. Collected samples were diluted and 0.1 mL inoculated on plate count agar to determine total viable count, on violet red bile agar to determine total coliform count, on mannitol salt agar to determine total Staphylococcal count and on Sabouraud’s dextrose agar for count of yeast and molds. Questionnaires were delivered for juice vendors to obtain information on demographic characteristics and conditions for processing. There is no significant statistical difference between numbers of microbial count (p> 0.05). The total viable count was found in the range of 1.3 × 105 to 2.9 ×105 cfu/ mL. The total coliform count was found to be between 0.1 × 105 and 2.4 × 105 cfu/mL. Staphylococci count was between 0.2 × 105 and 1.7 × 105 cfu/mL. The total yeast and mould counts for all fruit juice were in the range of 1.4 × 105 to 2.7 × 105 cfu/mL. Microbiological quality of most of the fruit juices were found to be not satisfactory when compared with Gulf region standard. Therefore, regular supervision and training about safe processing and handling is very crucial for juice vendors to improve microbiological quality of fruit juice.

Fruits are important in human nutrition, supplying the necessary growth factors such as vitamins and essential minerals in daily diet to help keep a good and normal health. Juices are commonly consumed as a beverage or can be used as flavoring in foods. It is prepared by mechanically squeezing of the fruit or vegetable flesh without heating or adding solvents (Agwa et al., 2014). In many   tropical    countries    they    are   common   man’s beverages and are sold at all public places and roadside shops. There are reports of food borne illness associated with the consumption of fruit juices at several places in India and elsewhere (Chumber et al., 2007; Pierre and Sivasubramani, 2015; Mahfuza et al., 2016).
Fruits and fruit juices processed under hygienic condition could play important role in enhancing consumers’ health through inhibition of breast cancer, congestive heart failure (CHF), and urinary tract infection. In absence of good manufacturing practice; however, the nutritional richness of fruits and fruit juices makes the product good medium for microbial growth, vehicle of foodborne pathogens and associated complications (Mihiretie and Desta, 2015). Food borne disease has been linked with utilization of fruit juice in several areas (Kaddumukasa et al., 2017).
Microbial food borne disease harms mainly gastrointestinal tract (GI) and are transmitted via consumption of contaminated food and water with pathogens. Studies showed that fruit juice may be potential source of pathogenic bacteria particularly E. coli 0157:H7, Salmonella sp., Shigella sp. and S. aureus (Agwa et al., 2014; Abisso et al., 2018).
Fresh squeezed fruit juices are preferred by consumers due to fresh flavor attributes and currently their demand have been increased (Mahale et al., 2004). Disease causing microorganism is introduced to fruits and vegetables via punctures, cuts and splits that occur during growing and harvesting (Kulkarni et al., 2017). Colonization of raw materials and equipments, processing conditions, improper handling and unhygienic conditions contribute significantly the entrance of bacterial pathogens to juices prepared from fruits or vegetables (Nicolas et al., 2007).
Several studies on knowledge and practice of fruit juice vendors regarding food safety was investigated in several countries indicating the gap between knowledge on food hygiene and handling practices (Babiye, 2017; Senbeta and Beyene, 2017). The urban residents of Ethiopia purchase canned or bottled forms of fruit juice available in supermarkets. In addition fruit juice vending houses serving different types of fruit juices in fresh forms are increasing. However, the scientific information on microbiological quality and safety of fruit juice prepared and consumed in Ethiopia is scanty. Therefore the objective of this study was to evaluate the microbiological quality of fruit juices and to assess the juice vendors knowledge on processing conditions at Shewarobit town, North showa zone, Ethiopia.

Study site
The study was conducted at Shewa Robit town located at 225 Km North east of Addis Ababa at a latitude of 9°59’60.00”N and Longitude of 39°54’0.00” E with an elevation of 1280 m above sea level. According to the 2007 Census Survey Report of the Ethiopian Central Statistical Agency, the town has a total population of 17,575.
Sample collection
Eight Avocado and eight Papaya fruit juice were collected using purposive sampling technique from service delivering five cafeterias and three restaurants in Shewarobit town from November 2017 to January 2018. All samples of fruit juice were collected on a voluntary basis from restaurants and cafes of Shewarobit town. A wide mouth sterile (250 mL) bottle was used for collection of juice samples and transported to laboratory in an ice-box, and processed immediately. Questionnaires were used to obtain information on the socio-demographic characteristics of juice vendors and hygienic quality. Questionnaires were prepared in English and translated into local language Amharic.
Microbial analysis
One millilitre (1 mL) of each liquid juice sample was taken and transferred into sterilized cotton plugged test tubes containing 9 mL of sterile peptone water, mixed thoroughly by shaking many times for 10-fold serial dilution aseptically under laminar flow. Appropriate dilutions of 0.1 mL of juice sample was inoculated on surfaces of respective media for microbial count using spread plate technique in duplicates. All culture media used for microbial analysis were from Himedia Laboratories Ltd, Mumbai, India. Plate Count Agar used for cultivation of total viable bacterial count after incubation of 32°C for 48 h. Violet Red Bile Agar (VRBA) was employed for enumeration of coliforms after incubation at 32°C for 48 h. Staphylococci were cultured on Mannitol Salt Agar (MSA) and counted after incubation at 32°C for 48 h. Yeast and molds count was conducted after incubation of 3 to 5 days on Sabouraud’s dextrose agar (SDA) at 25 to 28°C. 0.1 g of chloramphenicol was added to the media to inhibit bacterial growth (Titarmare et al., 2009).
The countable colonies were converted into weighted mean colony forming units per millilitre (cfu/mL) using the formula; N=Æ© C/(n1+0.1n2) d where; N=the number of bacteria counted, C= sum of colony counted in two successful dilutions, n1=the number of dishes retained in the first dilution, n2= the number of dishes retained in the second dilution and d= dilution factor corresponding to the first dilution. Two consecutive plates with 15 to 30 colonies were considered for record (Simforian et al., 2015).
Statistical analysis
Questionnaires were delivered to respondents to determine the factors related to microbiological quality and safety of fruit juice. The collected questionnaires from respondents were analysed and presented using descriptive statistics. The microbial counts of fruit juice grown on culture medium (total coliform count, Staphylococci count, total viable count and yeast-mold count) were analyzed using one-way ANOVA. P-value less than 0.05 were considered statistically significant. 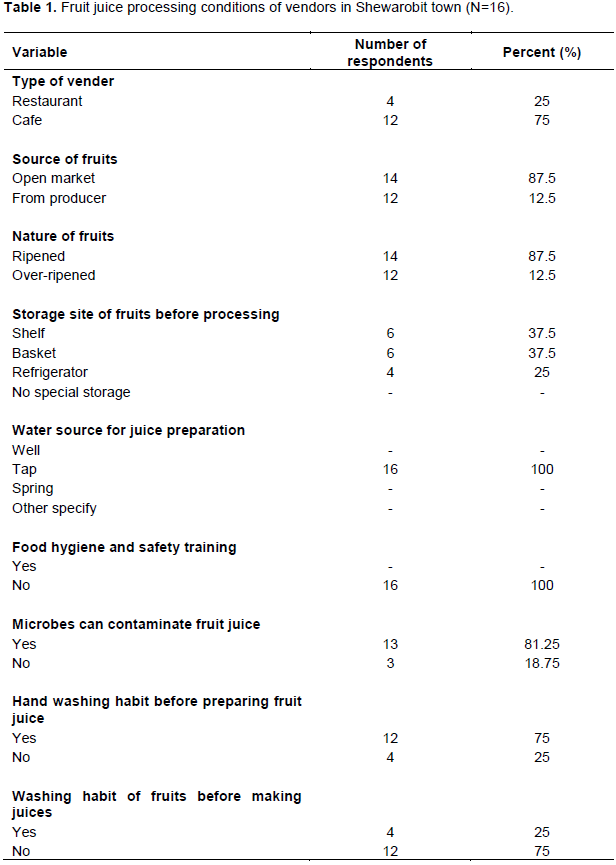 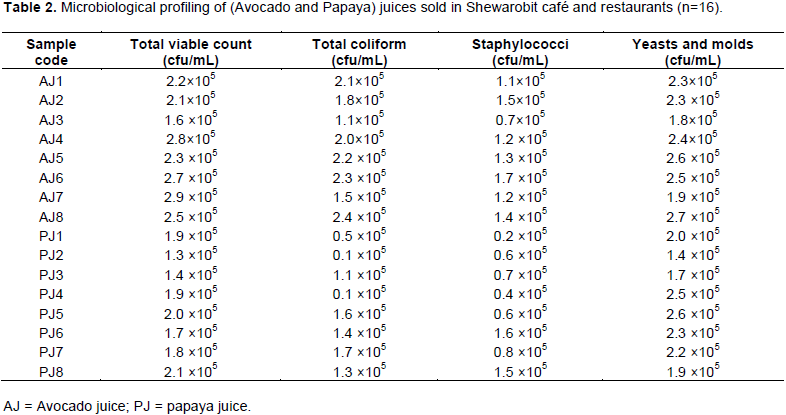 Laboratory examined samples of avocado and papaya juice were found to be contaminated with different groups of microorganism. All samples of Avocado and Papaya of fruit  juices  were  found  to  have  microbial  count  in  the range of 0.1 × 105 to 2.9 × 105 cfu/mL. Ketema et al. (2008) reported in Jimma town that the range of microbial counts recorded in the fruit juice analyzed were from 3.1 × 107 to 6.2 × 103cfu/mL.
The total viable bacterial count of all collected fruit juice in this investigation varies from 1.3 × 105 to 2.9 × 105 cfu/mL; this bacterial count was relatively lower than that of Singh et al. (2015) who reported that all samples of street vended fruit juices were found to have bacterial count in the range of 105 to 108 cfu/ mL. In other studies conducted by Ankur et al. (2009), the quantitative analysis of samples for total viable count (TVC) revealed that the range for TVC were between 1.0 × 104 to 4.0 × 106 cfu/mL.
According to study conducted in Kolkata city India, juice samples collected from most populated market places of and summarized account of the results obtained for the microbiological analysis of the juices; total viable counts were high ranging from 265-700 × 104 cfu/1000 mL (Mahuya et al., 2011).
However, the recommended specifications for fruit juices such as Avocado, Mango, Pineapple and Papaya available for public consumption in Gulf region suggest that the maximum count for Total viable count, Coliform count and Yeast-Mold count are 1 × 104, 1 × 102 and 1 × 103 cfu/mL, respectively. According to the specification of Gulf standards, the colony counts of all microbial groups (total coliform count, Staphylococci count, total viable count and Yeast-mold count) in this study exceeded the standard by considerable margin. The higher counts, however, may not necessarily pose hazard to the health of consumers provided that probably there are no potential  pathogenic strains such as strains of E. coli and Salmonella species within the fruit juices to be consumed (Babiye, 2017).
The total coliform count for investigated fruit juice was found to be between 0.1 × 105 and 2.4 × 105 cfu/mL. According to study conducted in Dhaka, Bangladesh, out of 114 freshly prepared fruit juices samples collected, 113 samples (99%) were positive for coliform and E. coli (Shakir et al., 2009). Coliforms include both the presence of faecal (0.05- 45×104 cfu/1000 mL) and non-faecal (0.15-76×104 cfu/1000 mL) (Mahuya et al., 2011). The result was greater than Gulf region standard with limited colony count of coliform not more than 100 cfu/mL in fruit juice. It is contended that contamination is mainly due to poor quality of water used for dilution as well as prevailing unhygienic conditions related to washing of utensils and maintenance of the premises. Presence of coliforms in high numbers (100 cfu/mL) was health hazard causing spoilage of fruit juices and food borne diseases.
The finding of the current result revealed that the Staphylococci count was between 0.2 × 105 and 1.7 × 105   cfu/mL for all fruit juice. The presence of Staphylococci in high numbers (103 cfu/mL) is a health hazard as they cause spoilage of fruit juices and food borne diseases (Gulf standards, 2000). The existence of S. aureus in fruit juice can contribute to contamination through handling and processing conditions.
The total yeast and mould counts for all fruit juice analyzed in the current investigation were in the range of 1.4 × 105 to 2.7 × 105 cfu/mL. According to the study conducted on the microbiological quality of freshly squeezed or freshly prepared fruit juices sold by local market vendors in Dhaka city; the total fungal counts were in the range of 1.0 × 101 to 8.05 × 104 cfu/mL (Shakir et al., 2009). Fungal fruit contamination may occur during the growing season, harvesting, handling, transport and post-harvest storage and marketing conditions (Al-Hindi et al., 2011). Fruits contain high levels of sugars and nutrient elements and their low pH values make them particularly desirable to fungal growth which in turn may result in their decay (Singh and Sharma, 2007). But the result of this study is more than the standard set by Gulf Region Mould and yeast count (1 × 103 cfu/mL).

From the present finding, the microbiological quality of most of the vendor fruit juices was found not to be satisfactory for consumption as compared to Gulf region standard. The total bacterial count, yeast and mould count, coliform count and Staphylococci count of investigated fruit juice was also alarming. All samples of Avocado and Papaya of fruit juices were found to have microbial count in the range of 0.1 × 105 to 2.9 × 105 cfu/mL. All of the study participants (100%) responded to the absence of training in food hygiene and safety.
Therefore, training about safe processing and handling is very crucial for juice vendors to improve microbiological quality of fruit juice.

The author declares no conflict of interest.

This research paper would not have been possible without the help of many people who supported the authors during their study period. The authors would like to express their heartfelt thanks and deep appreciation to Debre Berhan University, research directorate for financial support to conduct the study.