Isolation, identification and screening of lipid-degrading fungal organisms causing rot of unripe, ripe and dry fruits of Jatropha curcas L. were carried out, and determination of the fungus showing highest lipolytic activity on the substrate analysed from three different locations within Edo State, Nigeria was done using standard methods. Five fungal isolates (Curvularia geniculata, Lasiodiplodia theobromae, Trichoderma harzianum, Mucor sp. and Penicillium sp.) were recovered from the samples. Penicillium sp. had the highest frequency (37.5%) while Mucor sp. and Trichoderma sp. had the lowest (25%). Fungal isolates screened on solid agar showed low extracellular lipolytic activity detected by their non-production of a distinct clear zone of inhibition. In submerged fermentation, the growth of the lipolytic fungi ranged between 0.0492 (Mucor sp.) and 0.1539 g (T. harzianum). Spectrophotometric measurement (at 600 nm) of lipase production varied with Mucor sp. having the highest production of lipase. There was a significant difference (p≥0.05) between growth and lipolytic activities of the fungi. The study showed that Mucor sp. and L. theobromae are lipase producers and efficient lipid degraders. The implication of this is that these fungi could reduce the oil content of J. curcas seed and consequently its economic value.

Jatropha curcas L., commonly known as Barbados nut, purging nut or physic nut, belongs to the family, Euphorbiaceae. It is believed to have originated from Central America, most probably Mexico (Makker and Becker, 2009). The plant is a poisonous,  semi-evergreen shrub or small tree, reaching a height of 6 m (20 ft) and growing in wastelands of almost any terrain or any kind of soil, even on gravel, sandy, acidic or alkaline soils with pH between 5.5 and 8.5 (Sharma et al., 2012).Plants from  the same climatic  zone show morphological  differences with regard to the shape and size of the seeds and their protein and lipid content (Wolf et al., 1994). The plant is monoecious and flowers are unisexual, occasionally hermaphrodite. Ten stamens are arranged in two distinct whorls of five each in a single column in the androecium, and in close proximity to each other. In the gynoecium, the three slender styles are connate to about two-thirds of their length (Dehgan and Schutzman, 1994).
The plant is resistant to a high degree of aridity, allowing it to be grown in deserts. The seeds contain 27 to 40% oil (average: 34.4%) that can be processed to produce a high-quality biodiesel fuel, usable in a standard diesel engine (Makkar and Becker, 2009). The seeds are also a source of the highly poisonous toxalbumin and curcin (Abou-Arab and Abu-Salem, 2010). The seed cake can be used for fish or animal feed (if detoxified), biomass feedstock to power electricity plants, or as biogas or high-quality organic fertilizer. It can also be used as a bio-pesticide and for medicinal purpose (Henning, 2002).
Lipases are enzymes capable of catalysing the hydrolysis and synthesis of esters formed from glycerol and long-chain fatty acids (Svendsen, 2000; Sharma et al., 2001) and are produced by many microorganisms and higher eukaryotes (Elibol and Ozer, 2000; Kamimura et al., 2001). The ease with which enzymes could be isolated from microbes has made both bacteria and fungi predominant sources of lipase. However, fungi are the best lipase sources and are preferably used for industrial applications (Gupta and Soni, 2000; Mahadik et al., 2002).
Lipase producers have been isolated mainly from soil, or spoiled food materials that contain vegetable oil. Lipase production from a variety of bacteria, fungi and actinomycetes has been reported in several works (Kulkarni and Gadre, 2002; Maldonado et al., 2014). Lipase-producing fungi are present on a wide range of substrates in the ambient environment and these results could also provide basic data for further investigations on fungal extracellular enzymes (Griebeler et al., 2011). Among the available lipase-producing microorganisms, filamentous fungi belonging to various species of genera Aspergillus, Rhizopus, Penicillium and Trichoderma are described as prospective lipase producers (Lima et al., 2003; Kashmiri et al., 2006; Karanam and Medicherla, 2008). This study was undertaken to isolate, identify, screen and determine the most active lipase-producing fungus from Jatropha curcas fruit rot.

Sample collection
Fruit samples of J. curcas L. (unripe, ripe and dry) used were obtained from three different locations, viz. Nigerian Institute for Oil Palm Research (NIFOR), Ugbowo and Upper Sakponba areas, in Edo State, Nigeria.
Preparation of medium and bacterial growth inhibition
Chloramphenicol at 0.02 g per 200 ml of medium was introduced into potato dextrose agar (PDA) to inhibit the growth of bacteria. Inoculation and transfer of culture were carried out on sterile inoculating bench CRC (Model HSB 60*180) after disinfection with methylated spirit.
Isolation of fungi associated with fruit rot
Small portions (including rotten and healthy) of 5 mm diameter were cut from the mesocarp with a flamed scalpel blade. These were sterilized in 0.1% mercuric chloride solution for 2 min and rinsed in three changes of sterile water, and thereafter dried with sterile tissue paper and crushed before plating in Petri dishes containing PDA medium. Inoculated Petri dishes were incubated at temperatures of 10 ± 2, 28 ± 2 and 35 ± 2°C for 3 to 7 days (Malik, 1996). After the period of incubation, different colonies of fungi associated with the fruit rot were each aseptically sub-cultured using a flamed inoculation loop, into a sterile plate containing PDA. The frequencies of the various colonies were observed; distinct colonies were sub-cultured to obtain pure isolates which were then maintained on PDA slants and stored at -4°C for further study. After ascertaining the purity of cultures, the fungi were identified on the basis of cultural, macroscopic and microscopic features with the help of suitable literature (Barnett and Hunter, 1998). Culture samples were also sent to the Commonwealth Mycological Institute, England for confirmation.
Identification of fungal isolates
Mycelia from the different fungal isolates were harvested. Slides were prepared. The prepared slides were examined under bright field (BF) or differential interference contrast (DIC) illumination microscope. Additional microscopic samples were made by gently pressing a piece of transparent tape onto a colony. A Leica DM 2500 microscope with bright field, phase contrast and DIC contrast optics was used to view the slides for spore shape, hyphae and colour. A spot camera (with spot imaging software) was mounted on the microscope and used for photomicrography. A Panasonic High Definition (HD) 1920×1080 camera with 14MEGAPIXEL lens was used for colony photography.
Screening of the fungal isolates for lipase production on solid agar
A plate detection method containing a chromogenic substrate (Congo red) was used to screen the isolates for lipase-producing ability. The medium used for screening has the following composition in g/L: Peptone 10; NaCl2 5; Calcium chloride 0.1; Castor oil 1 ml; agar 50; Congo red 0.5; and distilled water 1,000 ml. The sterile medium was poured into plates and allowed to solidify. The agar plates were separately spot-inoculated with the fungal isolates and incubated at room temperature (28±2°C) for 14 days. Lipolysis was determined by the appearance of a clear zone of inhibition around the spot of inoculation. The diameters of the colonies and clear zones were measured from the 2nd (24 h after inoculation) to the 14th day (Gupta et al., 2004).
Screening of the selected isolates for lipase production using submerged fermentation
All the isolates were screened for lipase production in submerged fermentation  medium.  This  was  carried  out  using   the   modified method of Gupta et al. (2004). The sterile basal medium was inoculated with seed cultures of Lasiodiplodia theobromae, Curvularia geniculata, Trichoderma harzianum, Penicillium sp. and Mucor sp. Fermentation was carried out at room temperature (28±2°C) for 3 days for fungal isolates. Lipase production was determined by spectrophotometer at 600 nm (Gupta et al., 2004).
Data analysis
Experiments were performed in triplicate and the results were analysed statistically using SPSS version 16. The treatment effects were compared and significant differences were assessed with Duncan’s multiple range test at p≥0.05.

Five fungi were isolated from the fruit surface of J. curcas as the associated agents of fruit rot disease. The fungi are Penicillium sp., Lasiodiplodia theobromae, Curvularia geniculata, Mucor sp. and Trichoderma harzianum. At 35°C, there was no visible growth of fungi in the unripe fruit samples (Tables 1, 2 and 3). In addition, at 10°C, no growth was seen for both the unripe, ripe and dry samples. Fungal growth was noticed mainly at 28°C in the unripe, ripe and dry samples, with the highest colony-forming unit (CFU) count of 36 × 10-5 seen in dry sample from Ugbowo. The lowest CFU (1 × 10-5) was recorded in the NIFOR ripe samples at 28°C. Lipases are able to catalyze hydrolysis, esterification, trans-esterification and lactonization or intermolecular esterification (Gupta et al., 2011). Lipase producers have been isolated mainly from soil, or spoiled food materials that contain vegetable oil. Lipase production from a variety of bacteria, fungi and actinomycetes has been reported in several works (Sztajer et al., 1988; Kulkarni and Gadre, 2002). The fungal isolates screened in this present investigation showed low extracellular lipolytic activity in solid substrate fermentation. Decrease in extracellular lipase production can be associated with either decrease in fungal growth or inactive nature of enzyme itself (Lui et al., 1995). 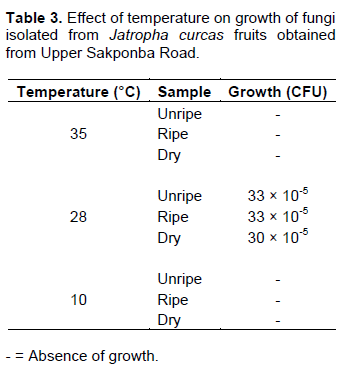 Table 4 shows the microscopic and morphological descriptions of the five fungi isolates from J. curcas fruit rot. Screening results of fungal isolates for lipase production and growth determination using submerged fermentation are presented in Table 5. The growth (dry weight) of fungal isolates in submerged fermentation ranged from 0.0492 (T. harzianum) to 0.1539 g (Mucor sp.). At 600 nm, Mucor sp. had the highest absorbance (0.284) as compared to C. geniculata which had the lowest absorbance of 0.022. However, in the liquid state (submerged fermentation), high lipolytic activities were observed. Lipase activity was highest in Mucor sp. followed by L. theobromae and Penicillium sp. Minimum activity was observed in T. harzianum and C. geniculata. Growth of the fungal isolates grown in PDA and lipolytic media is shown in Table 6. There were significant differences  in  fungal isolates  grown   in   PDA   medium between 3rd day and 14th day. Similarly, the growth of fungal isolates grown in lipolytic medium varied significantly. Previous reports by Prakash and Sivakumar (2013) have also shown that lipase activity is high in Mucor sp. in an experiment on isolation and screening of degrading enzymes from mangrove-derived fungi. The result is similar to that of Lazer and Schroder (1992) who investigated fungal lipases which degrade lipids from palm oil. Savitha et al. (2007) reported that fungal strains of different genera were isolated from various sources of which three Aspergillus spp. and one Mucor sp. were found to be positive for lipase production. In the present study, maximum biomass production was attained at the late period of fermentation (14th day) for T. harzianum and Penicillium sp., and 7th day for the other three fungi. This, however, is in contrast with the report of Kashimiri et al. (2006) who reported that maximum biomass production by T. viride was observed during the early hours of fermentation. This difference might be due to the species used. There was a significant difference in lipase production by the various fungi. 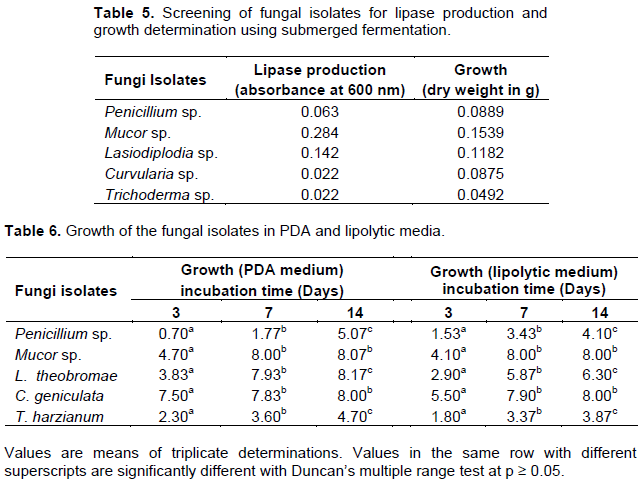 The present study showed that Mucor sp. and Lasiodiplodia theobromae are lipase producers and efficient lipid degraders of J. curcas seeds. If the activities of these fungi are not checked, they could lead to great losses in the J. curcas seed oil. This oil is currently being used for production of biodiesel- an environment friendly diesel, among other uses. It is suggested that further research on production, characterization and purification of the fungi be carried out.