This is the first study that investigated the isolation of extremely halotolerant Bacillus species from Dead Sea black mud. Nine isolates obtained from black mud were considered to be extremely halotolerant Bacillus based on morphological, physiological, and biochemical properties. Most of their colonies were white to light yellow and circular to irregular. All isolates were Gram-positive rod-shaped endospore-forming bacteria, facultative anaerobes, oxidase negative, catalase positive, mesophilic, extremely halotolerant, reacted positively for tryptophan deaminase and Voges-Proskauer, hydrolyzed gelatin and aesculin, and assimilated potassium gluconate. Most of the isolates were found to hydrolyze o-nitrophenyl-beta-D-galactoside (ONPG) and p-nitrophenyl-β-D-galactopyranoside (PNPG) as well as arginine, and assimilate D-mannose, N-acetylglucosamine, D-maltose, and malic acid. All isolates were considered to be nitrate reducers, six of them were nitrite producers and three were N2 producers, suggesting that they may play an important role in nitrification-denitrification processes and in the nitrogen cycle in soil. Based on 16S rRNA gene sequence analysis, the isolates were found to share very high identities (97-99%) with their closest phylogenetic relative and they were assigned to eight Bacillus species (B. oceanisediminis, B. subtilis, B. firmus, B. paralicheniformis, B. methylotrophicus, B. amyloliquefaciens, B. sonorensis, and B. malikii). Interestingly, several enzymatic activities were detected from nonhemolytic isolates DSM2 and DSM7 that were identified as B. paralicheniformis. It was found that only DSM2 isolate produced promising antimicrobial activities. Its aqueous extract showed the highest significant antifungal activity. Whereas, n-butanol and methanol extracts showed significant antibacterial and antifungal activities against human skin pathogens and against other frequent human pathogens.

Halophilic and halotolerant microorganisms that inhabit hypersaline environments can be found in all three domains  of  life  and  they  exhibit  different  metabolic pathways. Halophilic microorganisms are classified into mild (require at least 1% NaCl), moderate, and extreme halophiles  (require  up   to  30%   NaCl)   (Madigan   and Martinko, 2006). Whereas, halotolerant microorganisms possess the ability to grow in the absence of NaCl and also in the presence of high concentrations of NaCl. The halotolerant microorganisms that do not require salt for growth but grow well above 2.5 M salt (that is, above 15% NaCl) are considered extremely halotolerant (Kushner, 1978). Halophilic microorganisms maintain cell structure and function in hypersaline environments by osmoregulation which has been performed by synthesis of compatible solutes strategy, which have been used in industry, and salt-in strategy (Boone and Garrity, 2001; Madigan and Martinko, 2006; Oren, 2006). They play an important role in production of hydrolytic enzymes (Oren, 2006). Halotolerant bacteria are used in numerous industrial processes such as production of salty foods and in maintenance of soil health in saline environment (Vreeland, 1993).
The Dead Sea, in Jordan, is the second largest hypersaline lake in the world after the Great Salt Lake in the western United States. The Dead Sea is the lowest place on earth (Gavrieli et al., 1999). Therefore, it is unique by its high salt concentration especially magnesium, high barometric pressure, high partial oxygen pressure, unique UV radiation that found to be in the range of that reported at high altitudes such as the Alps and the Andes, low humidity, and rarity of rain (Avriel et al., 2011). Furthermore, the Dead Sea is unique in its microbiological environment. The Dead Sea pH is close to neutral (pH 6.1) and from which a large number of novel members of halophilic microorganisms have been provided including extremely halophilic archaea such as Haloarcula marismortui, new species of halophilic bacteria such as Chromohalobacter marismortui, novel halophilic fungal species such as Gymnascella marismortui (Oren, 2010). The Dead Sea was also the natural habitat for the green algae of the genus Dunaliella (Oren, 2010).
Dead Sea is rich in highly mineralized and sulfide-rich black mud. Black mudpacks that are abundantly distributed along the shore of the Dead Sea attract patients worldwide, who seek a cure for several skin diseases and rheumatic disorders (Abels et al., 1995; Abels and Kipnis, 1998; Oumeish, 1996; Halevy and Sukenik, 1998; AbdelFattah and Schultz-Makuch, 2004; Portugal-Cohen et al., 2015). Dead Sea black mud minerals have the potential to serve as skincare actives because they affected the expression of various genes that contribute to skin elasticity (Portugal-Cohen et al., 2015). The black mud deposits in three regions where the runoff streams flow into the Dead Sea; including, Jordan Valley, Jordanian Moab Mountains, and Judean Mountains (Rudel, 1993). The mineral mud is also extensively used as an ingredient in cosmetic preparations (Ma’or et al., 1996). It was reported (Abdel-Fattah, 1997) that the level of trace elements in the Dead Sea mud was less than those in any other sea mud and its major component is carbonate (40%) and less than 1% organic matter.
The purpose of the current study was to isolate and characterize halotolerant Bacillus from Dead Sea black mud. The hydrolytic and antimicrobial activities as well as the biochemical properties of the screened isolates were also determined. To our knowledge, this is the first study that investigated the presence of extremely halotolerant Bacillus in the black mud of the Dead Sea and examined their enzymatic and antimicrobial activities since they have not been previously reported.

Phenotypic characterization
Sixty-two aerobic bacterial isolates were harvested from the collected black mud samples with low colony forming unit (CFU) count (18,520-24,733 CFU/g) and most of them (47 isolates) have Bacillus characteristics (data are not shown). Based on morphological, physiological, and biochemical properties, only nine isolates which obtained from the Dead Sea black mud met the criteria of extremely halotolerant Bacillus (Tables 1 and 2). These isolates were considered extremely halotolerant Bacillus and different based on colonial morphology, Gram staining, cell shape, endospore formation, catalase test, and NaCl requirements for growth (Table 1). Most of the developed colonies were white to light yellow circular to irregular on TSA (Table 1). All isolates comprised Gram-positive rod-shaped endospore-forming microorganisms. 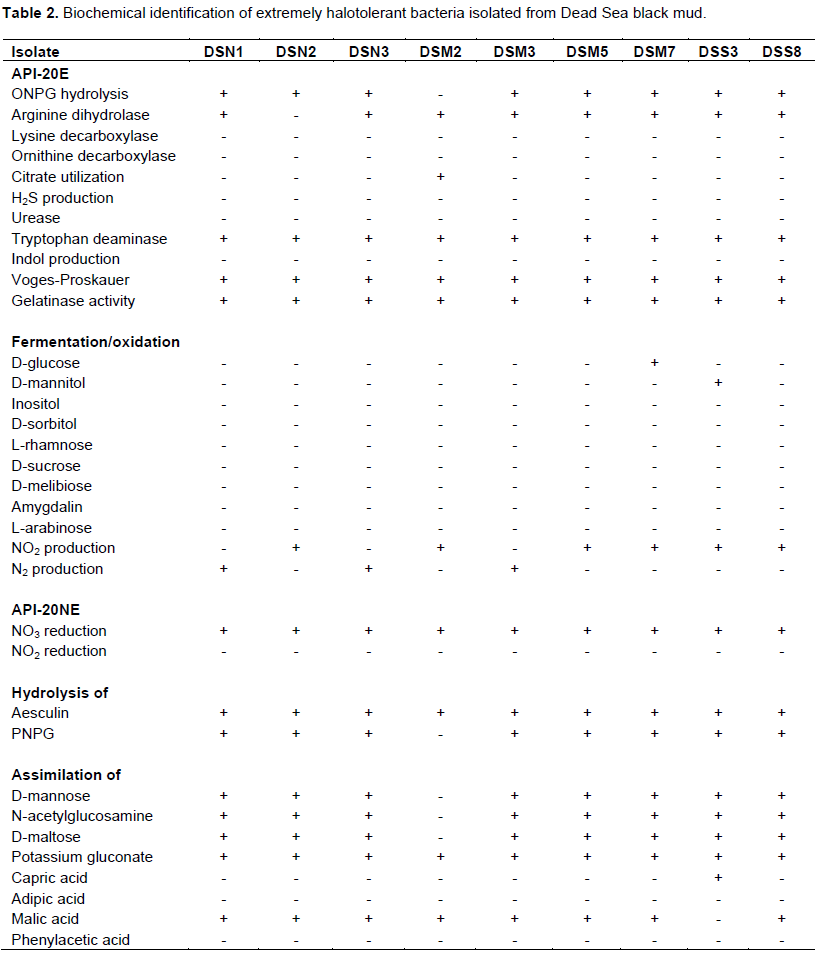 Physiological characterization
All isolates grew aerobically and anaerobically, thus the isolates were considered facultative anaerobes (Table 1). All isolates reacted negatively with oxidase and positively with catalase. As shown in Table 1, all isolates were capable to grow at temperature ranging from 25 to 45°C (optimal growth at temperature 36-37°C) except isolate DSN3 grow up to 40°C, at pH ranging from 5 to 9 (optimum pH for growth is between 6.3 to 7), and able to grow in the range of 0-20% salt concentration. Two isolates (DSN1 and DSM5) were found tolerant to 25% (w/v) NaCl and one isolate (DSM3) tolerated up to 30% (w/v) NaCl.
Biochemical characterization
The isolates were tested by different biochemical tests including API-20E and API-20NE (Table 2). For API-20E test, it was found that all isolates were positive for tryptophan deaminase, Voges-Proskauer, and gelatinase activity. Ortho-Nitrophenyl-β-galactoside (ONPG) hydrolysis and arginine dihydrolase were found to be positive for all isolates except isolate DSM2 and isolate DSN2, respectively. It was observed that only one isolate (DSM2) utilizes citrate, one isolate (DSM7) ferments D-glucose, and one isolate (DSS3) ferments D-mannitol. Whereas, fermentation or oxidation of inositol, D-sorbitol, L-rhamnose, D-sucrose, D-melibiose, amygdalin, and L-arabinose was negative for all isolates. All isolates reacted negatively to lysine decarboxylase, ornithine decarboxylase, H2S production, urease, and for indol production. Isolates DSN2, DSM2, DSM5, DSM7, DSS3, and DSS8 were found to be nitrite producers. Whereas, the remaining isolates (DSN1, DSN3, and DSM3) were dinitrogen gas producers. For API-20NE (Table 2), it was observed that all isolates were nitrate reducers but they were  unable to reduce nitrite, aesculin hydrolyzers, and potassium gluconate assimilators. Except isolate DSM2, all isolates were found to hydrolyze p-nitrophenyl-β-D-galactopyranoside (PNPG), and assimilate D-mannose, N-acetylglucosamine, and D-maltose. All isolates, except isolate DSS3, were positive for malic acid assimilation and only one isolate was positive for capric acid assimilation. None of the isolates assimilates adipic acid and phenylacetic acid.
Molecular characterization
For further identification of the screened isolates from Dead Sea black mud, genomic DNA was extracted from the isolates and amplified by PCR, and then 16S rRNA gene sequences were analyzed. The 16S rDNA of the isolates was amplified with Fd1 and Rd1 primers. The amplified genomic DNA of the isolates and the  reference strains produced PCR band with about 1500 bp in size (Figure 1). The obtained 16S rRNA gene sequences were aligned by BLAST alignment of GenBank sequences. Moreover, the sequences were submitted to the GenBank database and the accession numbers were kindly provided for the submitted sequences (Table 3). Based on BLAST alignment of GenBank sequences to 16S rDNA sequences, all isolates were allocated to the genus Bacillus with very high identities ranged from 97 to 99% (Table 3). The reference strain showed 99% similarity to the same species level of its closest phylogenetic relative B. cereus ATCC 14579 (Accession no. NR074540). Three isolates (DSN2, DSN3, and DSM5) had 97% sequence identity and the highest GC content. The remaining six isolates showed 99% sequence identity to the closely related phylogenetic Bacillus species. In addition, the aligned sequences showed high alignment scores to the closest phylogenetic relative and showed 100% query coverage, 0% gaps, and significant e-values, which equal zero. Based on the sequences alignment, it was clearly observed that the halotolerant Bacillus isolates were highly related to eight Bacillus species (oceanisediminis, subtilis, firmus, paralicheniformis, methylotrophicus, amyloliquefaciens, sonorensis and malikii). 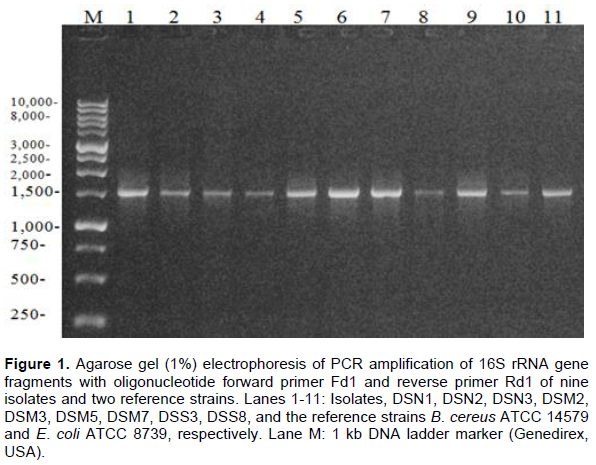 Based on the obtained sequences, a phylogenetic tree was constructed (Figure 2). The phylogenetic analysis of the 16S rRNA gene sequences reflected the affiliation of all extremely halotolerant isolates with the genus Bacillus, evidencing high bootstrap values at nodes (99-100%), and appeared closely related to the reference strain B. cereus ATCC 14579 with high bootstrap value (97%) (Figure 2). The 16S rRNA gene sequence of the extremely halotolerant isolates were clustered into two subclusters; subcluster-I (99% bootstrap confidence value at the node) that includes six isolates (DSN2, DSM2, DSM3, DSM5, DSM7, and DSS3) and subcluster-II which groups three isolates (DSN1, DSN3, and DSS8) together with 100% bootstrap confidence value at the node. 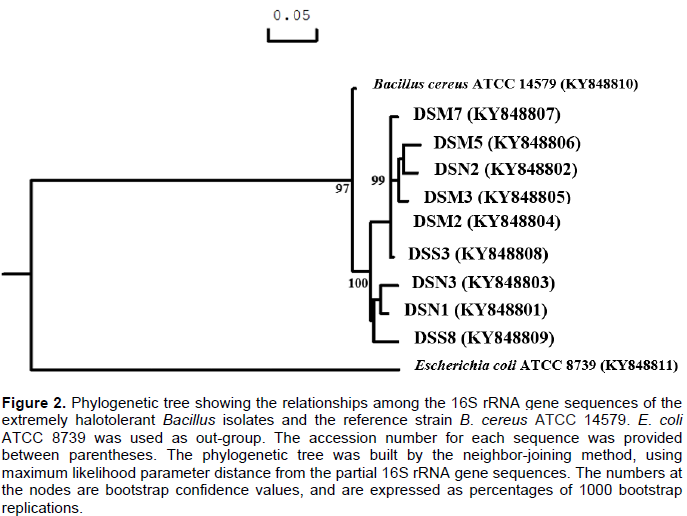 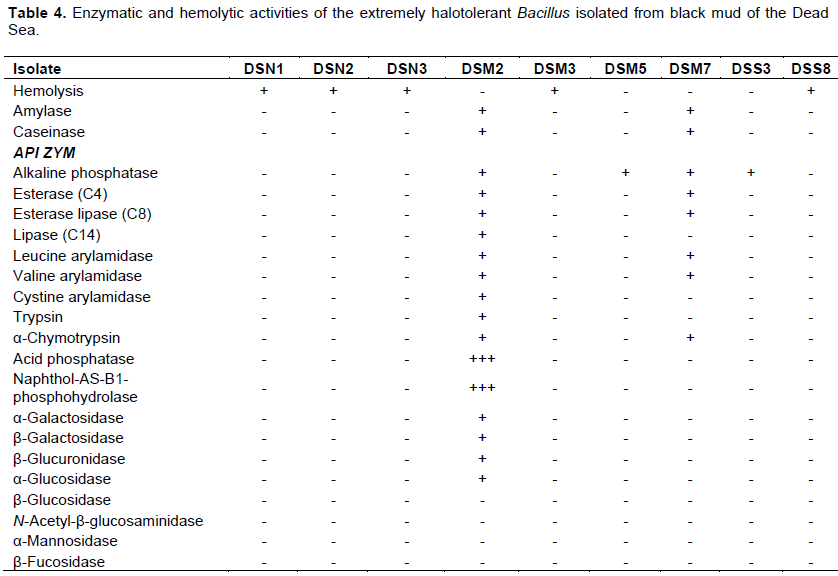 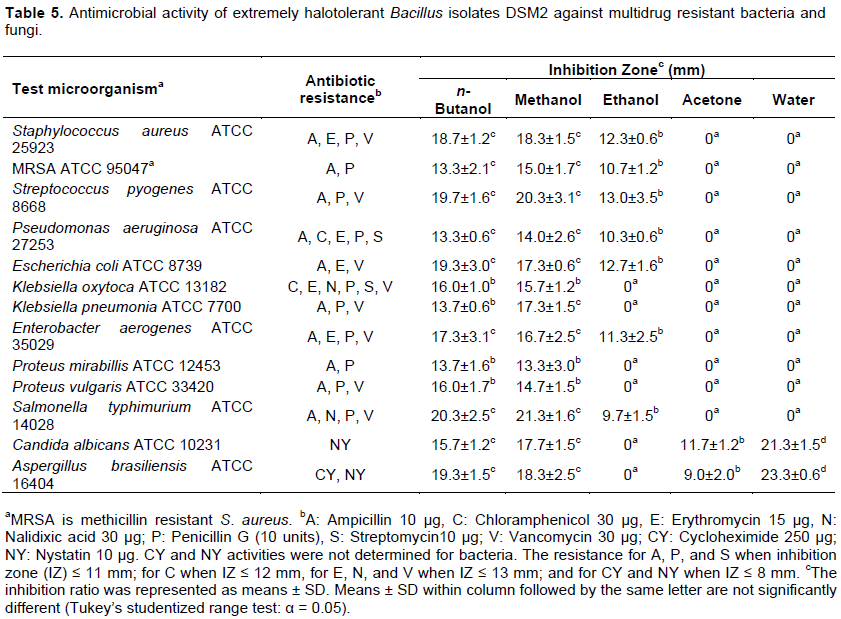 The authors has not declared any conflict of interests.