In order to assess the microbiological quality of Merguez and influence of temperature on the rate of contamination, from April 2 to May 12, 2016, a study was undertaken in two types of meat retailing in the region of M'Sila, Algeria. A total of 60 samples of Merguez were collected in ten sites from five markets and five independent butcher’s shops, for purposes of microbiological analysis. The majority of the samples were contaminated by coagulase positive staphylococci and thermotolerant coliforms. The average counting in both types combined trade were 2.0±0.2 log10 cfu/g for thermotolerant coliforms and 2.2±0.2 log10 cfu/g for coagulase positive staphylococci. However, all samples were free of Salmonella spp. and sulphite-reducing Clostridium. Compared to the days of sampling, both bacterial indicators counted in covered markets were significantly different from one day to another (p<0.05). However, no significant difference (p>0.05) were reported between daily concentration for these two groups of bacteria counted in samples from independent butchers. These results show disrespect the rules of good hygienic practices during preparation, storage and sale of Merguez. The potential consequences of the consumption of these foods on the health of consumers should motivate disease control measures.

Merguez is a red colored, spicy lamb or beef-based North African fresh sausage. Merguez is regarded as food of choice because of their nutritive values. Its high contents in proteins and the nature of those made these products as essential food for  a  balanced  feed  ration.  Its  safety  depends on the presence of factors such as relatively low water activity (aw) and low pH value. According to Shelef et al. (1997), acidity has a bacteriostatic effect on the evolution of germs. In parallel, water activity is a parameter that characterizes  the  water  content  of  food stuffs and most bacteria develop well for Aw between 0.995 and 0.980. Pathogens are inhibited for values ​​below 0.94 except for Staphylococcus aureus (Akollor, 1997).
Nevertheless, like all fresh products, it deteriorates quickly in particular under bad conditions of storage.
Thus putrefied Merguez was sometimes sold on the Algerian market. Moreover, because of its nutritional composition, it constitutes a rich medium very favorable to pathogens growth (Oumokhtar et al., 1998). It was often responsible of collective food borne diseases in Algeria (Mouffok, 2011).
A better knowledge of the factors involved in the bacterial contamination of these meat products is necessary to provide reliable data which allow the improvement of the strategies of prevention and to facilitate the implementation of correct conditions throughout the chain production of Merguez.
The main objective of this study was to evaluate the microbiological quality of the Merguez as a meat product largely consumed in Algeria, assessing consequently the hazards on public health. Moreover, high levels of contamination, during production and selling, obviously affect the hygienic quality of this sausage.

Sampling
During 6 weeks, from April 2 to May 12, 2016, we collected, one day a week, 60 samples of Merguez, from ten different retailing sites, located in M’Sila. The day of sampling varied each week (Saturday to Thursday) in order to achieve representative results. Two types of trade were targeted: independent butchers and covered markets (five points of retailing from each trade type). The temperature of storage was also recorded for each sample. The samples were taken within four hours after its exposure for selling. The samples (250 g) were conditioned in sterile bags, clearly labeled and identified, maintained in a refrigerator containing frozen cooling blocks. These bags are immediately sent to the quality control laboratory (DOUMI-C-Q-A-D) from M’Sila area. These samples were analyzed immediately upon their arrival.
Microbiological analysis
At the laboratory, each sample initially separated into 5 units then was cut out separately in small pieces in sterile Petri dish, a Stomacher sachet is tared and 25 g of each unit were weighed exactly there. Then, 225 ml of a solution of tryptone salt (TSE) (Pasteur Institute, Algeria) were introduced into the sachet. The unit was crushed during 2 to 3 min in Stomacher. The supernatant obtained after crushing was recovered in a sterile bottle (it is the stock solution (SM) of concentration 10-1). The latter was left at rest during 45 min, to allow the reactivation of the shocked or stressed microorganisms.
Various dilutions were performed  using  TSE  (Pasteur  Institute,Algeria) starting from the stock solution in accordance with the standards ISO 6887-1 (Norme ISO 6887-1, 1999).
The bacteria investigated and counted were the thermotolerant coliforms, the coagulase positive staphylococci, the sulfite-reducing Clostridium at 46°C and the Salmonella spp. (Arrêté interministériel, 1998).
The thermotolerant coliforms (TTC) were grown on Red Bile Agar supplemented with lactose (VRBL) (Pasteur Institute, Algeria), after incubation for 24 h at 44°C (Norme NF V08-060, 2009).
The coagulase positive staphilococci (CPS) were cultivated in Baird Parker agar (Pasteur Institute, Algeria) supplemented with Egg yolk and potassium tellurite. The bacterial number is evaluated after an incubation of 48 h at 37°C, their identity was confirmed by Gram stain, and the enzymatic based research of catalase and coagulase (Norme NF V08-057-1, 2004).
Sulfite-reducing Clostridium (SRC) at 46°C were counted after heating of the stock solution at 80°C for 10 min, then quickly cooled in order to destroy the vegetative forms of the clostridia and to activate their spores. After culture on the Tryptose-Sulfite medium with Cyclosérine (TSC) (Pasteur Institute, Algeria) at 46°C for 20±2 h, only the characteristic colonies were counted (Norme NF V08-061, 2009).
Salmonella spp (SLM) were detected according to the experimental protocol indicated by ISO 6579; it consists of: A pre-enrichment in buffered peptone water (BPW) (Pasteur Institute, Algeria). A double enrichment in 100 ml of Selenite Cystine broth (SCB) (Pasteur Institute, Algeria) and in 10 ml of Rappaport-Vassiliadis (RV) (Pasteur Institute, Algeria). An insulation on Hektoen agar (Pasteur Institute, Algeria) for the SCB and an isolation on brilliant green agar (BGA) (Pasteur Institute, Algeria) for the RV. Then, Galleries Api 20E kits (Bio Merieux) were applied (Norme ISO 6579, 2002).
All microbial counts were expressed as decimal logarithm of colony forming units per gram (log10 cfu/g). The results were compared with the criteria required by the Algerian inter-ministerial decree of January 24th 1998, related to the quality of foodstuffs. The maximum concentrations accepted for the counted bacteria are: 2 log10 cfu/g for TTC, 2 log10 cfu/g for CPS, 1.5 log10 cfu/g for SRC and the absence of SLM (Arrêté interministériel, 1998).
Statistical analyses
The average bacterial burdens were calculated per day, taking into account the trade type and for each bacterium. The day of sampling (from Saturday to Thursday) and the temperature of storage were considered as sources of variations. The bacterial count was evaluated five times and the mean was taken into account in the statistical calculations. A factorial analysis of the variance was applied to compare the results of the enumeration of the bacteria between the two types of trade. It is also used to compare means of bacterial enumeration according to sampling day.
The parametric Pearson’s correlation coefficient (r) was calculated to assess potential association between the average concentrations of counted bacteria and the temperature of storage at the moment of sampling.
The test of Student was used for comparison between the average number of bacterial colonies with the threshold of acceptability for each type of bacterium.
All calculations were carried out using STATISTICA software version 2007, after transformation decimal logarithmic of the results expressed as cfu/g to normalize the distribution.

Overall microbiological quality of the sampled Merguez
Table 1 presents the rate of contamination of the samples by the various flora according to both types of trade in M’Sila. For a given bacterial marker, this table gives the average bacterial concentration of five samples of each type of trade considered, expressed as log10 cfu/g. In all the positive cases, only the average concentration of CPS in the two types of trade is significantly higher than the threshold of acceptability (p<0.01 for independent butchers and p<0.001 for covered markets), that is to say at the maximum tolerated concentration (criterion fixed by the standards). Out of the 60 samples, 40.0% present a load in thermotolerant coliforms higher than the fixed standards; their average concentration is 2.0±0.2 log10 cfu/g. 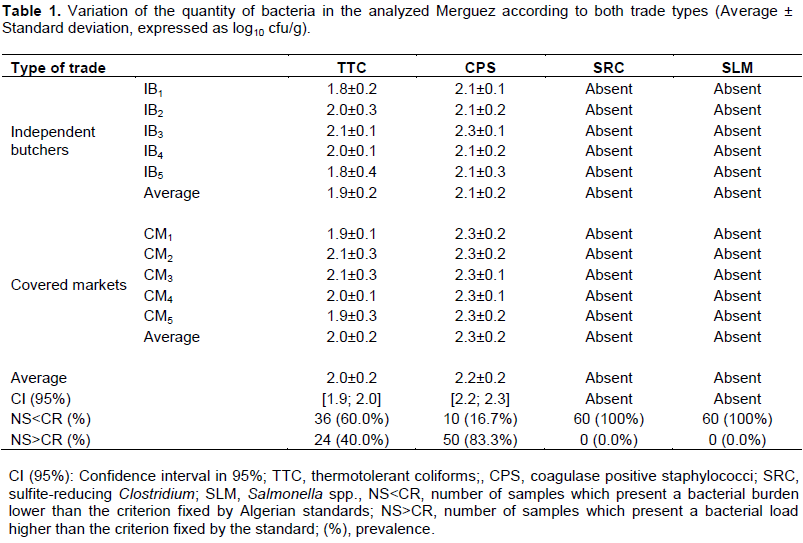 In the same way, 83.3% of the samples show a load in coagulase positive staphylococci higher than the standards, the average number is 2.2±0.2 log10 cfu/g.
For the Salmonella spp. and the sulfite-reducing Clostridium, no bacterium was isolated at least during this survey. Therefore, 100% of the analyzed Merguez are in conformity.
Compared to the types of commerce, CTT and SCP were less counted in independent butchers compared to the covered markets.
The comparison of the results obtained in the two types of trade does not show a significant difference (p>0.05) except for the TTC.
Daily variation of the bacterial indicators
Table 2 presents the daily variation of the two bacterial indicators (TTC and CPS) per day of sampling. The loads of the Merguez in both bacterial indicators did not vary according to the day of sampling for independent butchers (p>0.05). However, they significantly increased from one day to another for the covered markets (p<0.05). 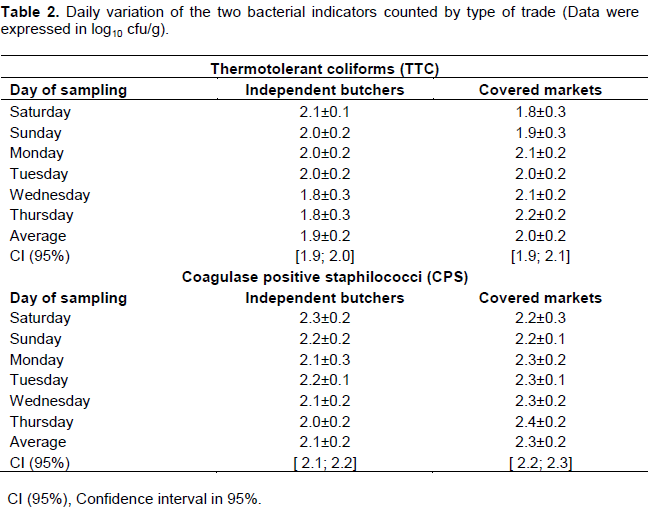 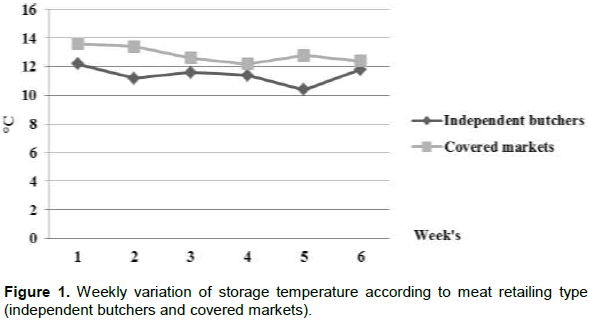 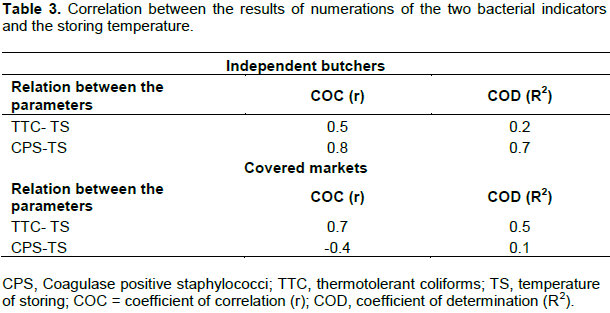 The present study reveals that in this topic the Algerian standards were not met. The variation of the bacterial load according to the day of sampling proves an instability in the working method in the covered markets, the most significant loads being recorded in weekend and are proportional to the quantity of the Merguez manufactured. The noted high bacterial burdens testify the bad hygiene at the retailing points and bad handling of the Merguez during and after manufacture. They constitute for the consumer a potential risk which will become real risk if errors are made during the preparation, in particular with regard to the temperature and the time of cooking. Moreover, the Algerian culinary practices imply intense torrefaction of the Merguez. However, it can be noticed a change in practice food and a development of the sector of the fast food. The hygienic quality of Merguez for sale could be improved by  setting-up of a policy of traceability of the meat in order to ensure healthiness throughout the production, storage and retailing chain. Moreover, the authorities in charge of the control of these foodstuffs should set up programs of health education and good practices of hygiene.