Microbial degradation of 4-chloroaniline by a bacterial consortium

In this study, we have isolated four different species from effluent contaminated soil using a mixture of aniline and 4-chloroaniline (4CA) as principal carbon sources. The four species were identified as Pseudomonas stutzeri A, Comamonas testosterone B, Pseudomonas putida C and Stenotrophomonas maltophilia D. Growth studies on aniline and 4CA as single and mixed substrates demonstrated that the bacteria preferred to grow on and utilize aniline rather than 4CA. However, despite 100% disappearance of the parent substrates, the degradation of 4CA was always characterized by incomplete dechlorination and 4-chlorocatechol accumulation. HPLC-UV analysis showed that 4-chlorocatechol was further degraded via an ortho-cleavage pathway by the bacterial consortium. This hypothesis was supported by the results from enzyme assays of the crude cell extract of the consortium revealing catechol 1,2-dioxygenase activity which converted catechol and 4-chlorocatechol to cis,cis-muconic acid and 3-chloro-cis,cis-muconic acid, respectively. However, the enzyme had a much higher conversion rate for catechol than for 4-chlorocatechol, indicating preference for non-chlorinated substrates. Members of the bacterial consortium were also characterized individually. All isolates were able to assimilate aniline. P. putida C was able to grow on 4CA solely, while S. maltophilia D was able to grow on 4-chlorocatechol. These results suggest that the degradation of 4CA in the presence of aniline by the bacterial consortium was a result of interspecies interactions.

4-Chloroaniline is one of the chlorinated aromatic amines that have been extensively used in the industrial pro-duction of dyes, cosmetics, pharmaceutical products and herbicides (Kearney and Kaufmann, 1975; Latorre et al., 1984). It has been registered in the high production volume chemical program of the Organization for Economic Co-operation and Development (OECD, 1997). Not only distributed through the industrial production, 4-chloro-aniline is also one of the primary intermediates pre-domi-nantly generated by microbial transformation of phenyl-urea, acylanilide and phenylcarbamate herbicides (Zeyer and Kearney, 1982; Haggblom, 1992). As a consequence of its intensive applications, it has been ubiquitous and accumulated in the environment including industrialeffluent, sludge as well as agricultural soil. Due to its toxicity and recalcitrant properties, it has been considered as one of the important environmental pollutants (EEC, 1976; Federal Register, 1979). To dissimilate the toxic compound, bioremediation can be applied as one of the remediation technologies in which a decontamination process depends on the microbial biodegradability.
Therefore, many efforts have been undertaken to isolate bacteria capable of biodegradation of chloroanilines (Surovtseva et al., 1985; Loidl et al., 1990). Although some microorganisms have been reported to have biodegradability towards chloroanilines, their limitation is that they are unable to grow on chloroanilines as sole sources of carbon and nitrogen (Helm and Reber, 1979; Reber et al., 1979; You and Bartha, 1982; Radianingtyas et al., 2003). Only recently, 3-chloroaniline-degrading Comamonas testosteroni strain I2gfp capable of utilizing 3-chloroaniline as a sole source of carbon and nitrogen was isolated (Boon et al., 2000). Nonetheless, under certain growth conditions, a few microorganisms have been reported to be able to grow on 4-chloroaniline as a sole carbon and nitrogen source. For instance, previous studies stated that the bacterial isolations were successful only after they were cocul-tivated or induced in the presence of aniline or another cosubstrate, for example, glucose, for some periods of time (Zeyer and Kearney, 1982; Radianingtyas et al., 2003; Travkin et al., 2003). In the current study, we used a defined bacterial consortium, reconstructed from strains isolated from a putatively herbicide-contaminated site, to investigate 4-chloroaniline (4CA) metabolism in the presence of aniline. Each member of the consortium was identified and characterized in order to determine their role in the degradation process.

Isolation, identification and biochemical characterization
Growth of the bacterial culture was observed after 5 days, during which time the colour of the liquid percolating through the column changed from colorless to dark yellow. Samples were plated out each week onto basal medium containing 4CA or aniline and incubated at 30°C for 7-10 days. After subsequent purification and sub culturing, four distinct isolates, designated as A, B, C and D were obtained and recombined into a bacterial con-sortium. All members of the bacterial consortium were Gram negative, rod-shaped, motile, non-sporulating and catalase and oxidase-positive. All isolates produced entire, smooth, glossy, convex and opaque colonies on tryptic soy agar plates. However, the consortium members were readily distinguished on the basis of colony charac-teristics: those of isolate A were orange and circular with diameter 2-6 mm; those of isolate B were off-white and circular with diameter 1-3 mm; those of isolate C were white and circular with diameter 3-7 mm; and those of isolate D were bright yellow, opaque and circular with diameter 2-4 mm. The results of further identification using the API 20NE test system, followed by FAME profiling and partial 16S rDNA sequencing analyses, are presented in Table 1. Integrated information of the phenotypic and genotypic characters of the four isolates led to them being identified as Chryseobacterium (previously Flavobacterium: Vandamme et al., 1994) Pseudomonas stutzeri A, Comamonas testosterone B, Pseudomonas putida C and Stenotrophomonas maltophilia D.

Metabolic characterization
In  batch  cultures,  the  bacterial  consortium  was able todegrade 4CA in the presence of aniline (Figure 1). Aniline was almost completely removed after 312 h incubation, while 4CA remained detectable in the culture. However, despite 100% disappearance of 4CA at the end of observation period (1152 h), dechlorination stopped at a chloride concentration of 0.25 mM (Figure 1). During the first 168 h of incubation a greenish-yellow colouration of the culture filtrate was observed. After 240 h, the colour of the culture turned dark brown and accumulation of 4-chlorocatechol in the culture supernatant was detectable by HPLC. In order to evaluate the effect of each substrate on bacterial growth, the consortium was grown on aniline or 4CA individually, or as a mixture. When the consortium was challenged with a mixture of 1 mM aniline and 1 mM 4CA, it showed a longer lag phase (72 h as compared to 18 h) and a higher specific growth rate (0.034±0.004 h21) than when each substrate was supplied alone (0.027±0.003 h21 for aniline and 0.014±0.006 h21 for 4CA) (Figure 2). When aniline and 4CA were supplied individually, the bacterial consortium had higher mmax and Ks for aniline (0.037±0.006 h21 and 0.074±0.006 g l21 respectively) than for 4CA (0.020±0.006 h21 and 0.022±0.005 g l21 respectively), that is, a higher specific growth rate on aniline but a higher affinity for 4CA. 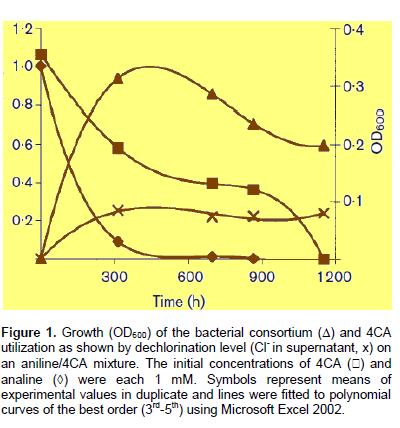 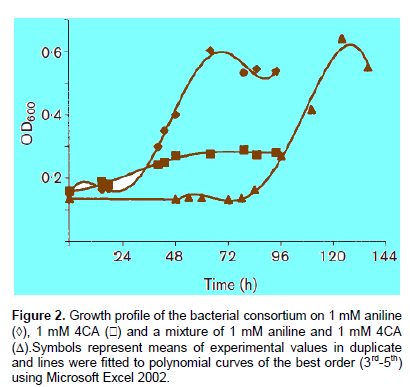 In subsequent experiments, the growth of the bacterial consortium was examined on aniline/4CA mixtures following a matrix combination (see Methods: degradation assays). The effect of 4CA concentration on the growth of the bacterial consortium at defined concentrations of aniline is shown in Figure 3a. 4CA at 3 mM inhibited bacterial growth at any concentration of aniline. On the other hand, the presence of aniline did notinhibit bacterial growth on 4CA, regardless of the concen-tration of 4CA (Figure 3b). In order to investigate the reason for the incomplete dechlorination, the degradation pathway of 4CA by the bacterial consortium was examined. Analyses of the culture filtrate by HPLC-UV revealed peaks that were similar to 4-chlorocatechol (3.92 min) and 3-oxoadipic acid (2.32 min) reference standards. The HPLC-UV analysis also showed peaks of unknown metabolites which appeared at 2.5 and 5.52 min. Further investigation of the 4CA degradation pathway was made by determining catechol 1, 2-dioxy-genase and catechol 2,3-dioxygenase activities of the consortium grown on a mixture of 1 mM aniline and 1 mM 4CA. The crude bacterial extracts transformed catechol and 4-chlorocatechol to cis, cis-muconic acid and chloro-cis, cis-muconic acid respectively, indicating the activity of catechol 1, 2-dioxygenase, but not to 2-hydroxymu-conic semialdehyde, the intermediate product from catechol 2, 3-dioxygenase activity. The specific activity of catechol 1, 2-dioxygenase in crude extracts of the bacterial consortium was higher against catechol than that against 4-chlorocatechol (Table 2). 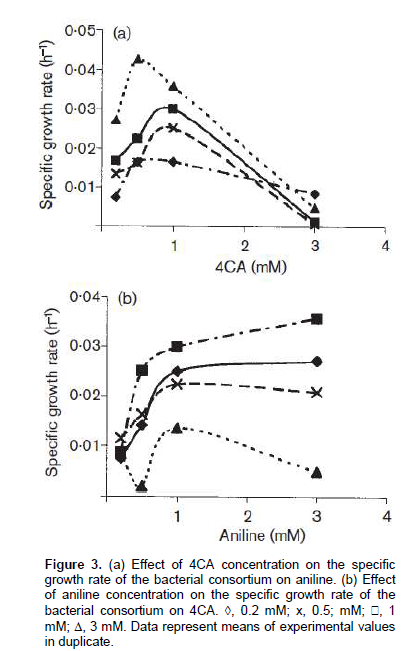 Characterization of consortium
To assess the possible role of each member of the bacterial consortium in 4CA degradation, their ability to grow as mono species cultures on 4CA in the presence of aniline was investigated. All the strains grew on mixed 1 mM aniline and 1 mM 4CA with specific growth rates ranging from 0.023 to 0.055 h21; Pseudomonas putida C had the highest specific growth rate. Similarly, all strains had lag phases between 48 and 72 h before exponential growth commenced. Whereas all four strains could growmaking HPLC analysis difficult. The dark brown colour also prevented the measurement of optical density and chloride concentration. When S. maltophilia D cultures incubated in 4-chlorocatechol liquid medium for 21 days were plated on tryptic soy agar, growth was observed within 72 h, indicating that this organism tolerated or utilized 4-chlorocatechol.

P. stutzeri A, C. testosterone B, P. putida C and S. maltophilia D were enriched and individually isolated as 4-chloroaniline-utilizing bacteria effluent contaminated soil. This characteristic is intriguing, as it was necessary for other chloroaniline-degrading bacteria reported so far to have either aniline or other nutrient as an inducer or a cosubstrate to stimulate the degradation pathway. These bacterial isolates exhibited a good growth rate and high biodegradation efficiency towards 4-chloroaniline via a modified ortho-cleavage pathway as well as a comparatively good biodegradability towards other chloroanilines demonstrating   their   potential   use    ininvestigation of nutrient supplemen-tation provided prelimnary information for each bacterial isolate, which may be useful for further bioremediation application of 4-chloro-aniline-contaminated sites.