The examination of 415 specimen belonging to twelve species of Teleostean fish and 339 specimen belonging to seven species of Chondrichthyan fish collected from the Tunisian coasts, it enabled us to identify 10 species of parasitic copepods: Lernaeopoda galei, Lernaeocera lusci, Neobrachiella merluccii, Hatschekia mulli, Caligus elongatus, Caligus pageti, Neobrachiella mugilis, Clavellotis fallax, Clavelissa pagri and Clavelissa scombri. The distribution of copepods identified, varies from one host species to another. Merluccius merluccius and Liza saliens present the important number of copepods species. The copepod Hatschekia mulli is the most abundant.  The presence of Lernaeopoda galei on Scyliorhinus canicula, Mustelus mustelus and Mustelus punctalatus was reported for the first time in the southern banks of the Mediterranean.

Copepods are common parasites of marine fishes and have been reported from a great range of depths (Boxshall, 1998). This group of ectoparasites exhibits an astounding variety of lifestyles, host associations and morphology, to the extent that their crustacean affinities may be obscured (Huys et al., 2007). More than 2000 species of copepods parasitize marine and freshwater fishes and most are ectoparasitic: they are found all over the external body surface of the host as well as in more sheltered microhabitats that are permanently directly connected to the external environment, including the external nares, the eyes, the oral and branchial cavities, the  gills   and   the   cloaca  (Rosim  et  al.,  2013).  Many copepod parasites negatively affect the appearance and reduced production of species of economically important fish, both from the wild and fish farms, thus making them difficult to market (Aladatohun et al., 2013). It is important to mention that in addition to their impact on host demographics populations, parasites also influence the ecosystem processes that are diverse as competition, migration and speciation of the hosts (Kaouachi et al., 2010).

Copepods parasites have been studied extensively in the world and in Tunisian coast, where they have become pests of Teleost fish species of commercial importance (Kabata,  1958;  1984; Faliex and Morand, 1994; Sasal et al., 1996).

However, little is known of the diversity of parasitic copepods of Chondrichthyan fishes. The aim of this work is to analyze species of copepods parasitic richness, study copepods specificity and evaluate host epidio-mogical characters by calculating infestation parameters. These features will be compared with other studies.

A total of 415 specimens belonging to twelve species of Teleostean fish and 339 specimens belonging to seven species of Chondrichthyan fish were collected from 4 different Tunisian gulfs: Bizerte, Tunis, Hammamet and Gabès (Figure 1). The host species was identified using the method of Fischer et al. (1987) and Froese and Pauly (2014). Collected copepods were immediately removed from the hosts and preserved in 70% ethanol. Subsequently, specimens were cleared in lactic acid for 2 h prior to examination using stereo and light microscopy. Specimens were dissected on glass-slides and mounted as temporary preparations in lactophenol under a dissecting microscope. Measurements were made using an ocular micrometer. The drawings were made with the aid of a drawing tube. The data, the sampling area, the name and the size of host fish and the position of the parasite were noted. 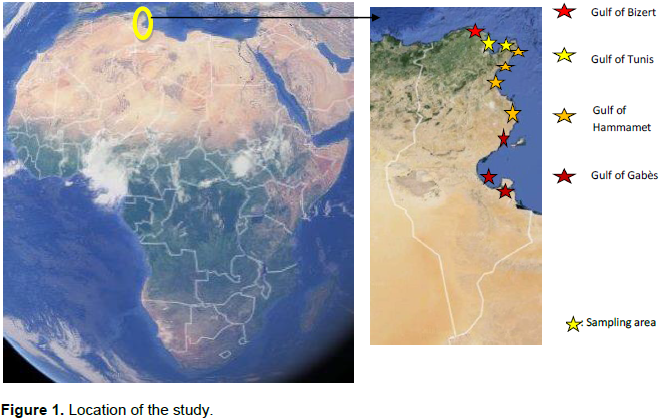 The hosts, the number of examined fish, the number of the infected fish, the parasitic indices (Prevalence (P), Intensity (I) and Abundance (A)) of each species of copepod were calculated, the specificity and the site of fixation are registered in Table 1.

The examination of the whole fish species enabled us to collect 10 species of parasite copepods of which eight are hosted by Teleost fishes and two others are found in Chondrichthyan fishes (Table 1) (Figures 2 to 11).

The study of parasitic specificity revealed that 3 of the species are O. Oixenous. However, 5 are S. stenoxenous. C. elongatus and L. galei are E. Euryxenous (Table 1).

Analysis of richness of parasites per family

The analysis of the parasitic richness indicate that the family of Lernaeopodidae present the highest richness (MSR= 6) and the lowest one is recorded on Hatschekiidae (MSR=1) (Figure 14).

Merluccius merluccius and Liza saliens present the highest number of parasitic species (2). In Tunisia, the highest parasitic diversity was mentioned by Benmansour and Ben Hassine (1997) in Pagellus erythrinus (6) and Diplodus annularis (5). On the coast of Algeria, Pagellus erythrinus and Lithognathus mormyrus present the important number of parasitic species (5) (Boualleg et al 2010).

However, we found only two species of copepods on Chondrichthyan fish. The study of Essafi (1984) on Chondrichtyan fishes in Tunisian waters allowed in the collection of 22 different species of copepods. Nevertheless, we report for the first time the occurrence of Lernaeopoda galei on Scyliorhinus canicula, Mustelus mustelus  and   Mustelus   punctalatus   on  the  southern banks of the Mediterranean. This can be explained by the scarcity of studies on parasitic copepods of Chondrichthyan fish in this part of the Mediterranean. L. galei parasite in several Chondrichthyan fish species was never harvested on M. punctalatus. This is the first mention of this copepod on this host fish.

Also we assign Caligus elongatus as parasite of Raja clavata in Tunisia. C. elongatus parasitize several species of Chondrichthyan fish among them, 5 species of Rajidae (Raja batis, Raja clavata, Raja laevis, Raja maevus and Raja radiata) (Boxshall, 2001). In Tunisia, it was harvested for the first time on Symphodus tinca by Benmansour and Ben Hassine (1997).

The data  concerning  the  dominance  of  stenoxenous species was different from the results recorded by Raibaut et al. (1998) and Benmansour and Ben Hassine (1997). Those authors showed that the large majority of copepod species are oioxenous. This difference between our results and those of the other authors is probably explained by the small taxonomical and geographical scale of our study. Sasal (1997) proved that studies conducted at different scales may lead to opposite conclusion.

Finally, it is very interesting to note that copepod species  can cause serious fish diseases, even though they present low parasitic indices. According to Company et al. (1999) and Athanassopoulou et al. (2001) parasites that have a low prevalence and abundance and minor pathological effects on their hosts in the wild can easily spreads in populations, confined to rearing systems and causing serious outbreaks of epizootic diseases.

Therefore, further investigations are still needed to deepen our knowledge of these ectoparasites of Teleost and Chondrichthyan fish.