A comparison of antibacterial efficacy of some household detergents available in Makkah, Saudi Arabia, against 16 ATCC bacterial strains and clinical isolates

The emergence and spread of multidrug-resistant microorganisms are threats to public health due to its related increasing rates of morbidity and mortality in the world. Routine disinfection practices do not eliminate many of these resistant species and may contribute to the development in their resistance. Therefore, the current study evaluates the effectiveness of some popular detergents labelled as antibacterial and available at local market. Fifteen different brands of detergents were tested against thirteen American-type culture collection (ATCC) strains; five species related to Gram-positive bacteria, eight species to Gram-negative bacteria and three clinical isolates, (Escherichia coli, Klebsiella pneumonia and Methicillin resistant Staphylococcus aureus (MRSA) by measuring their efficacy by agar well diffusion technique and contact time assay. Dilution levels of detergents exhibited different zones of inhibition against the tested bacterial strains. The initial dilutions of detergents (DAC, SUNOVA, CLOROX, Drummer, GENTO, Dettol with pine, Dettol, Clorox Original, EMLAG and 3 M) showed inhibition zones ranging from 10 mm to >40 mm on Gram positive bacteria. Dettol, Clorox Original, EMLAG and 3 M showed inhibition zones ranging from 11 to 20 mm on limited numbers of Gram-negative bacteria at the first dilutions of detergents. The results showed that, Dettol, Clorox and 3 M were the strongest detergents compared to the other detergents included in this study. A contact-time assay showed a positive relationship between exposure time and efficacy of detergent against the tested bacterial strains.

Detergents are chemicals contain a lipophilic and a hydrophilic component that have the potential to prevent the growth of or destroy microorganisms  on  the  surface of inanimate objects, including potentially pathogenic organisms, and played an important role in controlling the spread  of  infectious diseases (Rutala and Weber, 2013).
Disinfectant is chemical or physical agent that destroys pathogenic microorganisms but might not kill microbial spores and the disinfection process was defined by the British Institute as reducing the levels of harmful organisms to harmless while not killing all microorganisms (Thomas et al., 2005). Multidrug-resistant bacteria are the major cause of nosocomial infections (NI), these infections are a public health issue throughout the world (Wellington et al., 2013; Savard et al., 2013). These organisms can be transmitted from the hospital environment and health care workers to patients (Siegel et al., 2007; Alfa et al., 2015; Otter et al., 2013).
Some studies confirmed that patients who stay in hospitals transmit these bacteria to the facilities, which leads to the possibility of the transmission of these microbes to other patients later admitted to these rooms (Donskey, 2013; Eckstein et al., 2007; Ontario Agency for Health Protection and Promotion, 2012). Proper disinfection techniques by broad spectrum biocidal compounds can prevent nosocomial infections (Kundrapu et al., 2012). Some studies have concluded that daily disinfection of medical equipment that used by patients and their accommodation places by effective disinfectants limits the levels of contamination by these organisms (Boyce, 2007; Theraud et al., 2004; John, 2016).
Scientific methods of sterilization and disinfection are necessary for controlling the prevalence and spread of hospital-acquired infections (Zoutman et al., 2011). Therefore, failures to follow these methods may lead to many hospital-acquired infections contributing to increased morbidity and mortality in hospitals (Strassle, et al., 2012). The selection of effective disinfectants for health-care facilities is a critical factor, and so must be based on scientific analysis to ensure the efficacy of the disinfectants against microbes that cause the emergence and spread of hospital-acquired infections (Tacconelli et al., 2014; Kampf et al., 2014).
The disinfection process can be affected by several factors such as temperature, acidity, concentration of the disinfectant and contact time during the disinfection process (Ferreira et al., 2015). Pathogenic organisms vary in their degrees of response to different detergents, as they constantly acquire resistance to different formulas. The efficacy of disinfectants against targeted pathogens that are selected for the disinfection process must be studied and analyzed (Santos-Junior et al., 2018). It is necessary to evaluate the effectiveness of detergents against pathogens before use and not rely on the information provided by the manufacturing companies to ensure the optimal efficacy (Kawamura-Sato et al., 2008; Boyce and Pitted, 2002).
Many health care workers are not properly informed on how to choose appropriate disinfectants and use phenolic disinfectants, which have a generally low effectiveness in the disinfection process. This leads to an uncontrolled increase in infections among patients in  hospitals  (BSG, 2003; Alfa et al., 2010; Manitoba, 2007; Shang et al., 2015). The aim of the current study is to evaluate the effectiveness of a number of some common brands of detergents sold in Makkah, Saudi Arabia used in hospital disinfection against pathogenic bacteria which cause infection among patients, as well as determine the required time to eliminate these pathogens by disinfectants. 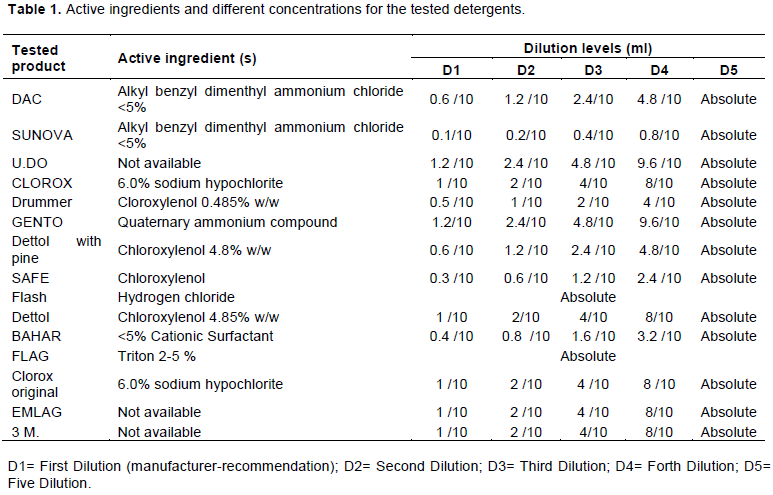 Well diffusion method
A diffusion assay on Mueller-Hinton agar plates  was  performed  as  described by the Clinical and Laboratory Standards Institute (CLSI) (Hindler and Keiser, 1994; Jorgensen, 1993). The bacterial strain was suspended in a Mueller-Hinton broth and adjusted to 0.5 McFarland turbidity. A sterile swab was dipped into the bacterial suspension and swabbed on the Muller and Hinton agar plates. Plates were allowed to dry for 10 minutes before being punched with a 6 mm diameter sterile sharp glass rod. After that, wells were filled with 100 µl from different detergents and one well was filled with 100 µl of dimethyl sulfoxide (DMSO) as a negative control. Vancomycin 30 µg disc and Amikacin 30 µg disc diffusion solutions were used as positive controls for Gram-positive bacteria and Gram-negative bacteria respectively, then the plates were incubated at 37°C for 24 h and examined for inhibition zones. These steps were repeated with the second, third, fourth and fifth dilutions for each detergent. Inhibition zones around the wells indicated effectiveness of detergents against the tested bacterial strains. Absences of inhibition zones indicated ineffectiveness of detergents against tested strains. Results are shown in Table 2.
Time kill assay
A contact time assay was performed as described by Clinical and Laboratory Standards Institute (CLSI M26-A, 1998) depending on the turbidity of the bacterial growth in broth culture media (CLSI, 1998). Tested bacterial strains were suspended in Mueller Hinton broth and adjusted at 0.5 McFarland. 500 μl had been removed and added to 9.5 ml of the first dilution of the detergent solution at room temperature. At the end of the first minute from addition, 10 μl of the suspension was removed and added to 5 ml Mueller-Hinton broth tube. This was repeated after two, three, four, and five minutes from zero time. A Mueller-Hinton broth tube without the addition of detergent was used as a negative control. This step was repeated with the second, third, fourth and fifth dilutions of detergents. The inoculated tubes were labeled and incubated at 37°C for 24 h. After the incubation period, the tubes were classified as turbid (indicating growth) or clear (indicating no growth), corresponding to resistance or sensitivity to detergents as shown in Table 3. 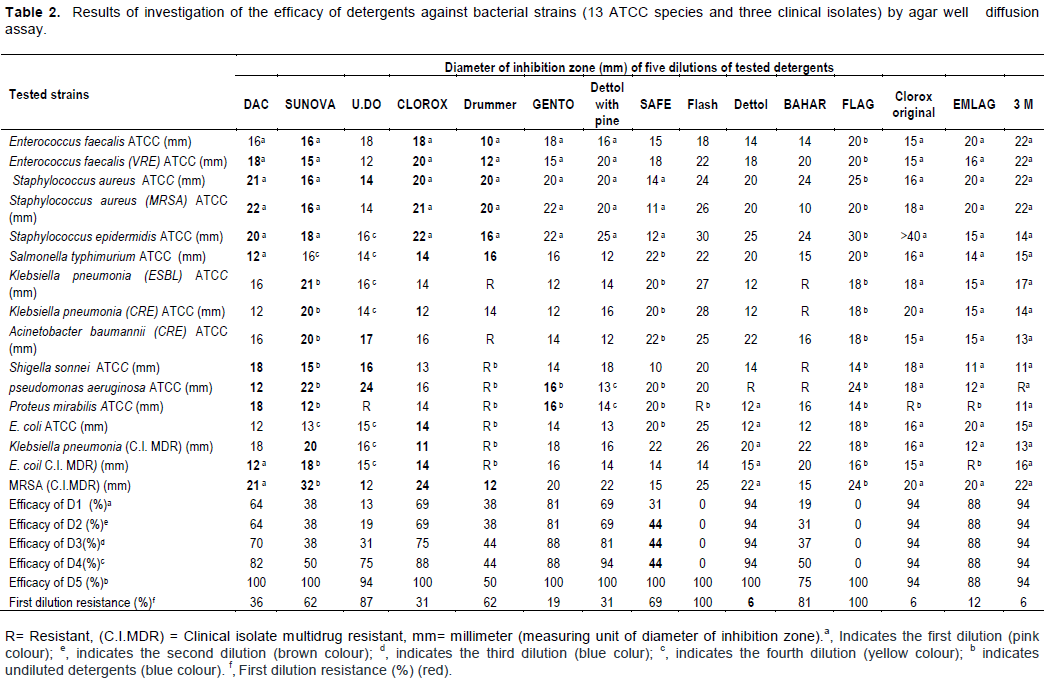 Standard hygiene measures are necessary to prevent the transmission of many antibiotic-resistant bacteria among hospital patients. The cleaning and disinfection of target surfaces is essential for limiting risks associated with these organisms (Reitzel et al., 2009; Savard et al., 2013; Buescher et  al.,  2016;  Magiorakos  et  al., 2013; Willey et al., 2008). The procurement of detergents without a scientific basis as well as a prevalence of incorrect methods of disinfection in health-care facilities may contribute to the development of microbial resistance. Phenolic products, which are highly toxic, are commonly used at health-care facilities in many countries due to their low cost. Ideal detergents should have a broad spectrum of effects on microorganisms and minimal toxicity (Pierson, 2009; Kaliyadan et al., 2014). None of the recommended dilutions of the tested detergents were found to be effective against the majority of the tested bacterial strains, except Dettol and 3 M, which expressed efficacy patterns when applied to the majority of tested bacteria    at     the     manufacturer-recommended dilutions with the exception of P. aeruginosa, which showed resistance to all dilutions. and Clorox Original and EMLAG, which expressed efficacy against all tested bacteria except P. mirabilis which exhibited high resistances to all dilutions. Only certain detergents of popular brands were observed to inhibit the growth of Gram-positive species and limited Gram-negative bacteria in this study. The highest efficacy of the used detergents against the tested bacterial strains at the first dilution was 94%, with only three detergents (Dettol, Clorox and 3 M) out of the fifteen detergents tested observed to be effective when applied to sixteen bacterial species, while there was no efficacy for both FLAG  and  Flash  on  all  tested  bacterial strains at the first dilution. Gram-positive bacteria were less resistant to successive dilutions of tested detergents. Some of the Gram-negative bacterial strains exhibited high resistances to the tested successive dilutions, with some of them exhibiting resistance to all dilutions, as depicted in Table 3. Gram-positive bacteria exhibited the highest response to the first dilution of Dettol, Clorox, DAC, Gentoo and 3 M at the first minute of contact time assay, with the lowest response recorded with exposure to Drummer. Gram-negative strains exhibited the greatest response to Dettol, Clorox and 3 M and the lowest response to Gentoo at the first minute of the first dilution. These results indicated that Dettol, Clorox Original and 3 M are the most effective antimicrobial agents among the detergents included against tested strains in this study, which supports the results of previous studies (Jain et al., 2016; Olasehinde et al., 2008; Sickbert-Bennett et al., 2005; Bockmühl et al., 2019; McDonnell and Russell, 1999). This study has highlighted two important factors for increasing detergent efficiency against pathogenic bacteria that should be considered appropriate concentration and exposure time. The results of this study indicated that an exposure time of microorganisms to disinfectants of at least five minutes could increase their effectiveness.
The usage of higher concentrations of disinfectants associated with increased toxicity is not recommended. Results also indicated that manufacturer instructions for the usage of detergents should not be relied upon. Rather, rigorous testing should be carried out to determine their effectiveness on pathogens before usage to avoid the spread and resistance of microorganisms. Therefore, it is highly recommended to evaluate new detergents before procuring them for hospitals and also to periodically verify their effectiveness (Peter and Scott; 2019; Rutala and Weber, 2014; Ngu et al., 2015). It is also recommended to select detergents that are most effective for eliminating the microorganisms that cause nosocomial infections, apply them at the appropriate concentrations and recommended contact times to ensure their efficacy and use them periodically to ensure that the spread and resistance of these microorganisms are reduced. Further research is needed to study the appropriateness, safety and efficacy of detergents against the nosocomial infections.

The efficacy of detergents against pathogenic microorganisms is an important factor for controlling the spread of microbial infections and disease transmission. Most of the recommended dilutions of detergents included in this study were effective against all bacterial strains tested.  Only certain brands of detergents were able to suppress the growth of gram-positive bacteria and certain gram-negative species tested in this study. It was observed that Dettol, Clorox and 3M  were  the strongest detergents compared to the other detergents included in this study. A contact-time assay showed a positive relationship between exposure time and efficacy of detergent against the tested bacterial strains. It is recommended to evaluate new detergents before applying them in hospitals and to verify their use periodically to ensure their effectiveness for reducing rates of nosocomial infection. Accordingly, we recommend using detergents which have high efficacies against most bacterial strains and avoiding the usage of detergents that have poor efficacies in order to prevent increasing bacterial resistance in health care units.

The authors appreciate Mr. Asim Abdul-Shakor and Mr. Mohamed Al -Thaqfy from the Microbiology Department, College of Medicine, Umm Al-Qura University, Saudi Arabia for their assistance during this study.