Evaluation of the microbiological quality of "mabokés" smothered fish and, proteolytic activity of bacteria of the genus Bacillus in Brazzaville, Congo

Fish is an important nutritional supplement in a diet low in protein,  vitamins  and  minerals (Degnon et al., 2012). Its worldwide consumption is increasing significantly. In 2016,  out  of  the  171 million tons of fish produced in the
world, 151 million tons were used for human consumption, 88% compared to 67% in the 1960s (FAO, 2008). To date, more than 400 million Africans regularly consume fish in all its forms (Worldfish, 2017). Congo, because of its hydrographic density, has different species of fish that contribute to the economic livelihoods of the population (Kimbatsa, 2016). The diversity of cultures in the world has resulted in a wealth of recipes and methods of fish preparation. In Congo, in rural areas as well as in urban areas including Brazzaville, fresh fish is eaten in stews, sauces, barbeques, fried in oil, grilled and stewed. Summers called smothered fish "mabokés" are very popular and eaten a lot. In addition to households, fish stews are prepared and sold in markets, on public roads, in restaurants and drinking establishments, and at fish auctions by itinerant women. Any food product intended for consumption and offered for sale must protect consumers from infection or contamination and be of good quality (Assogba et al., 2018). The presence and multiplication of microorganisms makes this type of food unsuitable and therefore presents a health risk that can cause gastroenteritis for the consumer. To date, no microbiological studies have been conducted on this product. This work is part of an effort to assess the microbiological quality of the smothered fish "mabokés" sold in some markets in Brazzaville in order to evaluate the sanitary conditions related to the consumption of these products and to determine the proteolytic activity of some strains of Bacillus.

Colony purification and isolation
Purification is one of the most important steps in strain isolation. It was carried out in nutrient agar. Each colony was seeded separately with streaks until distinct and homogeneous colony was obtained. To ensure the purity of the strains, microscopic observation was performed. The characterization of the isolates was started by the application of classical microbiology techniques, based on the search for a certain number of characters (cell morphology by the fresh status under the optical microscope, the type of Gram) (Mabika et al., 2020). Only Bacillus isolated and purified on Mossel Agar were stored at 4°C in cryotubes containing the appropriate broth (Luria-Bertani) with 20% glycerol added.
Proteolytic potential of some Bacillus strains
To test the production of the caseinolytic enzyme effect of twelve (12) strains of Bacillus, we used the techniques modified by Puri et al. (2002). The cells were cultured in Luria Bertani (LB) medium under agitation at 37°C, for 48 h. 1 ml of the culture was introduced into a 1.5 ml eppendorf tube and centrifuged at 6000 rpm for 5 min in a micro centrifuge. The supernatant was recovered. 2 ml of culture was used to measure optical density with the spectrophotometer at a wavelength of 600 nm (Nguimbi and Wu, 2002). In a 250-ml Erlenmeyer flask containing 100 ml of 0.1N PBS, we dissolved 1 g of agarose and heated it until completely dissolved. After cooling the mixture to 55-60°C, we added 10 ml skim milk and homogenized the mixture. It was poured into Petri dishes; after solidification, wells were prepared in the gel. 50 μl supernatant was placed in each well from the centrifugation of the culture. The plates were placed in the oven at 37°C for 12 h. Observation of a clear translucent zone indicates that the strain produces a proteolytic enzyme with a caseinolytic effect (caseinolytic protease) (Nguimbi et al., 2014; Mabika et al., 2017). 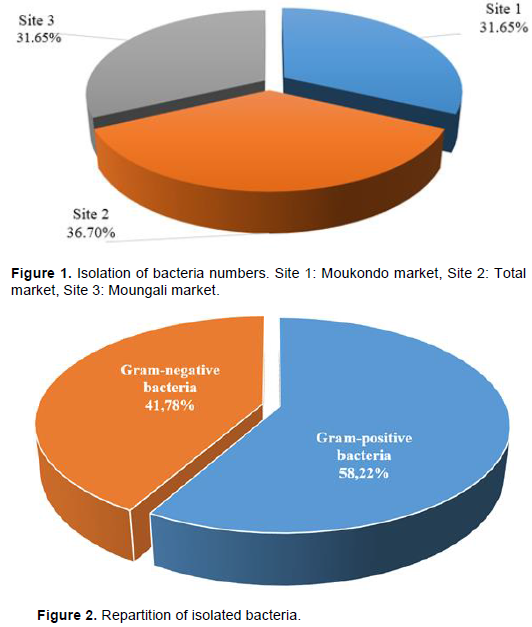 The main objective of this study is to assess the microbiological quality of the smothered fish "mabokés" sold in some markets in Brazzaville in order to evaluate the sanitary conditions related to the consumption of these products and to determine the proteolytic production of some Bacillus strains. During this study, the average value of the microorganism varies from one site to another. The enumeration results show that the average value of the total flora varies from 2.90.108±1.5.107 CFU/mL (Site 2) to 5.55.109±2.107CFU/mL (Site 3), that of Bacillus between 1.30.107±1.41.106 CFU/mL (Site 2) and 7.85. 107±1.02.106 CFU/ml (Site 3), for Staphylococcus between 1.44.106±2.02.106 CFU/ml (Site 1) and 6.17.106±8.25.106 CFU/ml (Site 2). The average value of Enterobacteriaceae ranges from 70.104±2.4.104 CFU/ml (Site 2) to 9.15.105±1.29.104CFU/ml (Site 3) and from 0 (Site 3) to 5.65.104±7.85.104CFU/ml (Site 1) for Shigella. Yeasts were absent in all samples.
Variations  in  the  microbial  load  from  one  sample to another could be due to preparation and cooking conditions that often express a lack of hygiene that encourages various types of contamination. The presence of microorganisms indicates the alteration of the product in the different samples (Abotchi, 2010). The results on the total flora are similar to those reported in Senegal by Thiam (1993) (3.4.108 CFU/g) on the microbiological and chemical quality of braised-dried fish (kétiakh) sold on the Dakar market.
A lower average was reported by Watanabe (1974) (2.6106 CFU/g), working on the technology and hygiene of salt-dried fish processing methods in Africa with special reference to Ghana, Senegal and Zambia. The work carried out by Mokemiabeka et al. (2016) in Congo on a fermented food revealed a total flora variable from one sample to less (68.105 CFU/mL) than that reported. Mabika et al. (2020), working on stewed squash sold in markets in Brazzaville, reported lower total flora loads ranging from 1.73.107 CFU/g for the Moukondo Market to 9.43.107 CFU/g (Tsieme Market). Bacillus loads ranged from 3.5. 106 CFU/g for the total market to 8.96. 106 CFU/g for the Tsieme Market. This charge is much lower than the one reported in this work. The presence of Bacillus could be explained by the fact that Bacillus sporulate and resist cooking temperatures (Ehon et al., 2015). This ability allows this genus to resist even antibiotics and thus opens the way to other more severe pathologies although, the Bacillus genus would contribute to the reduction of odours as demonstrated by some work on a mixed population of lactic acid bacteria and Bacillus in the microflora of cassava retting (Achi, 2006).
The count of yeasts and moulds in a product is a key indicator of its sanitary quality before it  is  placed  on  the market. It is often well-known species that cause undesirable changes in products (Laredj and Waffa, 2017). The absence of yeasts in the samples analyzed from the three sites indicates the freshness of the food. These results are contrary to the results of work on the microbiological quality of smoked fish, which demonstrated the presence of fungal flora (Abotchi, 2010). These results obtained, suggest that cooking as well as the closed environment in which the smothered fish is found, not being exposed to the outside environment, no fungal development is possible. These results also suggest that the batches analyzed were certainly prepared and disposed of on the same day they were acquired. Cleaning with water of the cassava leaves used for packaging of smothered fish could effectively contribute to the improvement of the microbiological quality of this food. The proteolytic (caseinolytic) test shows that 9 out of 12 selected strains showed better degradation of milk casein (Figure 4). This activity was demonstrated in Bacillus strains isolated from Ntoba mbodi and squashes in the Republic of Congo by Mabika et al. (2017, 2018, 2020). It is important to note the presence of proteolytic activity in strains isolated from fish in the smothered state.  The genus Bacillus is recognized among bacteria that secrete bioactive substances such as proteases (Nguimbi and Wu, 2002), bacteriocins (Barboza et al., 2009; Mokemiabeka et al., 2016). These results on caseinolytic enzyme production in strains 4, 5, 24 and 26 with diameters between 15 and 21 mm are consistent with those reported by Adinarayana et al. (2003); Nihan and Elif (2011); Ehon et al. (2015); Mabika et al. (2017); Mabika  et al. (2018); Ngo-Itsouhou et al. (2019) and Mabika et al. (2020).

This study made it possible to assess the microbiological quality of the smothered fish "mabokés" sold in some markets in Brazzaville in order to evaluate the sanitary conditions related to the consumption of these products and to determine the proteolytic activity of some Bacillus strains. Gram postive bacteria were mostly isolated from choking poisons. These include bacteria of the genus Bacillus, Staphylococcus. Gram-negative bacteria were Enterobacteria. The presence of these bacteria in this food indicates that the food is unfit for consumption. It would therefore be advisable to reduce consumption or even stop eating these smothered fish to avoid being exposed to foodborne diseases. On the other hand, the proteolytic test revealed strains of Bacillus with a high capacity to produce the caseinolytic enzyme.