Helicobacter pylori is the most common infection in the world, and the most main causes of dyspepsia are related to H. pylori infection. In that respect, several non-invasive methods for the diagnosis of H. pylori infection were utilized. The current study aimed to determine the prevalence of H. pylori infection and its associated variables among dyspeptic patients in Mukalla city, Hadhramout-Yemen during a period from February to September 2018. A cross-sectional descriptive study was conducted among 100 suspected dyspeptic patients. Data regarding to associated variables were collected using a structured questionnaire, and the samples of feces and serum were collected and screened for H. pylori by rapid diagnostic immunochromatographic assays for antigen and antibody. Data was analyzed using SPSS statistical software version 20 and a P value <0.05 was taken statistically significant. Prevalence of H. pylori was found to be 15 and 18.5% using the antigen H. pylori test and serum anti-H. pylori test respectively. Prevalence using antigen H. pylori test was significantly associated to male sex (P=0.035). In those patients with H. pylori, a positive result with antigen test was significantly associated to drinking non-filtered water (COR = 3.67; 95%CI=1.436-9.363; P=0.007), symptoms of heartburn and regurgitation (COR=0.865, 95%CI=0.034-0.536, P=0.004) and antibiotics used (COR=0.312, 95%CI=0.125-0.780, P=0.013). The prevalence of H. pylori infection was frequent among the dyspeptic patients in the study area. H. pylori infection was related to non-filtered water source, symptoms of heartburn and regurgitation and antibiotics used are contributing factors. Moreover, further studies are needed to investigate other potential associated variables for H. pylori infection.

Helicobacter pylori infects about 30-50% of the general population worldwide and its infection acquired during early childhood (Liu et al., 2017). H. pylori is recognized to play a causative role in the pathogenesis of various gastrointestinal diseases including peptic ulcer, chronic gastritis and it has been etiologically associated with mucosa-associated lymphoid tissue (MALT) lymphoma and gastric carcinoma (Chandrababu et al., 2016; Nevoa et al., 2017).
Dyspepsia is a common health problem worldwide with an overall prevalence 25%. The diagnosis and management of dyspepsia causes a lot of economic burden worldwide (Naz et al., 20013). Dyspepsia symptoms often include epigastric pain, postprandial fullness, and/or early satiety. In dyspeptic patients without infection of H. pylori, it has been shown that ulcer disease is very rare and endoscopic examination is usually normal or shows evidence of oesophagitis (Wong and McLean, 2016). Dyspepsia also is a common presenting complaint of various upper gastrointestinal disorders. There are many causes of dyspepsia and the major ones include peptic ulcer disease (PUD), gastroduodenitis, esophagitis, malignancies, parasitic infection and dyspepsia (Ayana et al., 2014).
Although the route of transmission of H. pylori infection is not clearly known, some evidences indicate the main route is by contaminated water and food and faecal-oral transmission (Shiferaw and Abera, 2019), but it is not clear if specific foods can increase the risk of H. pylori infection or not (AlKalbani et al., 2016). H. pylori infection is apparent significantly higher in the developing countries than in the developed countries and the distribution varies between geographical locations and different communities (Lu et al., 2018). Most people get their primary infection of H. pylori during the childhood stage and stay infected during their life time (Atherton and Blaser, 2009). Also, there is no agreeable on the state of being male or female as a risk factor for H. pylori infection, but the physiological differences between male and female may affect the mechanism of immune response to the pathogenesis of bacteria (Ibrahim et al., 2017).
Non-invasive diagnostic tests for detection the antigen and antibody directed against H. pylori are now available and these tests are valuable both for screening and evaluation of therapy (Lee et al., 2013), and these non-invasive tests are also easy and cheap to perform (Formichella et al., 2013). The advantage of antigen detection test is to evaluate the eradication of H. pylori infection. However, if antigen concentration becomes low, false negative results may be reported. Fecal antigen detection H. pylori has certain disadvantages like antigen excretion may vary over the time period and may degrade while passing through the intestine (Patel et al., 2014).
In countries with low socioeconomic status like Yemen, there is poor personal hygienic practice, poor waste disposal system, crowded living conditions and lack of clean and safe water which are known to make individuals susceptible for H. pylori infection. Currently, large groups of populations predisposing to several risk factors of H. pylori infection. So, the prevalence and the epidemiological patterns of H. pylori infection varies greatly among societies and geographical locations. On a wider level, there is continuing need for numerical data on H. pylori infection distribution, its determinant and potential risk factors associated it in order to identify priorities for the health services in the community. On the other hands, studies on prevalence of H. pylori infection are important to design the appropriate interventions strategies. Therefore, the current study was aimed to evaluating the potential associated variables with the prevalence of H. pylori infection among dyspeptic patients by using fecal antigen and serum antibody diagnostic methods in Mukalla city hospitals, Hadhramout Governorate, Yemen.

Study design and study population
This cross-sectional descriptive study was conducted among suspected cases of patients complaining of dyspepsia referred to some main hospitals in Mukalla city, Hadhramout governorate, Yemen during a period from February to September 2018.
Inclusions criteria
The patients showing symptoms of dyspeptic disorders were included in this study. Dyspepsia was defined as the presence of 2 or more of the following symptoms; heartburn, acid regurgitation, increased abdominal bloating, nausea, feeling of abnormal or slow digestion, or early satiety (Duvnjak, 2011).
Sample size calculation
The following formula was used for the sample size calculation (Samson et al., 2018):
n = (1.96)2 pq / d2
Where:
n = required sample size
p = proportion of the population having H. pylori infection from previous study
q = 1 - p
d = the degree of precision
For the calculation, a 95% confidence interval, P of 0.375, that is, a prevalence rate of 37.5% from previous study by Moharram et al. (2015) and margin of error (d) set at 0.05 was used to determine the minimum sample size required. To minimize errors arising from the likelihood of non-compliance, 15% of the sample size was added to obtain the final sample size. Therefore, a convenience sample of 100 suspected dyspeptic patients were included in the study and examined for H. pylori fecal antigen and anti-H. pylori serum rapid tests.
Data collection tool
A standardized, interviewer-administered, structured questionnaire was developed to obtain data regarding H. pylori infection associated variables. It consisted of systematic questions on demographic  variables  of  gender,  age  groups, educational level, monthly income level and family size; personal habits and hygienic behavior variables of food patterns, water sources and smoking; clinical variables of symptoms associated with infection and antibiotics drug used. The questionnaire filled with the aid of an interviewer.
Laboratory analysis
One step H. pylori antigen test is a rapid, serological, immunochromatographic assay supplied by InTec Products, INC, USA for detection of H. pylori antigen in human feces sample. The test is used to obtain a visual, qualitative result with a high sensitivity 98.4% and specificity 98.6% as per manufacturer’s specifications. When feces sample is added to sample pad, it moves through the conjugate pad and mobilizes gold anti-H. pylori conjugate that is coated on the conjugate pad. The mixture moves along the membrane by capillary action and reacts with anti-H. pylori that is coated on the test region. If H. pylori is present, the result is the formation of a colored band in the test region. If there is no H. pylori in the sample the area will remain colorless. The sample continues to move to the control area and forms a pink color which indicating the test is working and the result is valid.
Serum anti-H. pylori was detected using a one-step anti-H. pylori test cassette supplied by InTec Products, INC, USA. The advanced quality rapid anti-H. pylori test is a colloidal gold enhanced test detect antibodies in human. The test is based on immunochromatography and can give a result within 20 min with a high sensitivity of 94.88% and specificity of 95.21% as per manufacturer’s specifications. The test is used for the rapid visual qualitative detection of antibodies to H. pylori in human serum, plasma or whole blood. The procedures followed the manufacturer’s instructions. In brief, 100 µl of sample or control was dispensed into the circular sample well on the card, then the test results interpreted at 15-20 min.
Ethics approval and consent to participate
Research ethical approval of this study was obtained from Hadhramout University, Faculty of Sciences. Written consent was obtained, meeting No. HU/FOS/P1/11/2017, date 12/11/2017 before commencing the study. Permission letter was obtained from the hospital’s administrations. The information was taken from the participants after they agreed to it verbally according to the informed consent with confidentiality of each study participant’s result.
Statistical analysis
Statistical Package for Social Sciences (SPSS) version 20 was used for data analysis. The association between different variables and outcome of H. pylori infection was calculated and compared using Pearson Chi-square (χ2) test. Binary and multiple regression tests (crude odds ratio/adjusted odds ratio) were used to detect independent predictors of H. pylori positivity in dyspeptic patients. The level of statistical significance was set at p-value < 0.05. 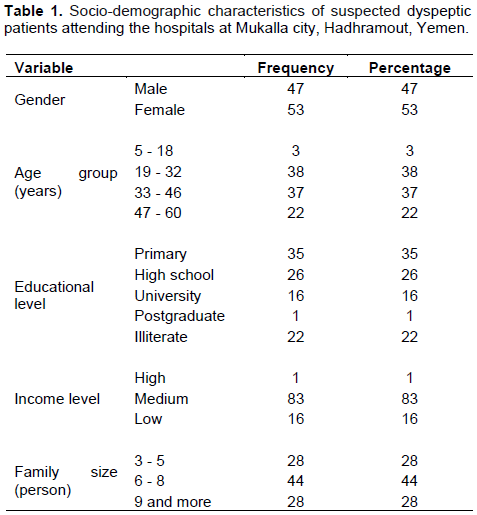 The limitation of this study was the lack of a control (non-dyspeptic) group. The sample size of the study is relatively small. For diagnostic test involving sensitivity, specificity, positive predictive value (PPV), negative predictive value (NPV) and accuracy all these deal with how efficient a test must use the gold standard technique. Lack of advancing techniques such as invasive or molecular diagnostic methods. Using a cross-sectional descriptive study design impeding the determination of causality, therefore we anticipate that future studies with a longitudinal or survey study design over more extended periods of time.