Microbiota sampled from a polluted stream in Recife-PE, Brazil and its importance to public health

Pollution of water bodies can cause environmental and public health problems. The Cavouco stream is a tributary of the Capibaribe River, one of the main rivers in the state of Pernambuco, Brazil, and receives a high pollution load from residential, laboratory and hospital effluents. The aim of the present study was to perform phenotypic and molecular characterization in this stream, and evaluate the water quality using microbiological parameters. Water was collected from five sampling points, and bacterial species were identified using biochemical and molecular methods through 16S rRNA gene sequence analysis. Total and thermotolerant coliforms were also quantified. Fermenting Gram-negative bacilli from the family Enterobacteriaceae (Escherichia coli, Klebsiella pneumoniae and Proteus mirabilis), non-fermenting bacilli (Pseudomonas aeruginosa and Pseudomonas putida) and Gram-positive bacilli (Bacillus cereus, Bacillus licheniformis, Bacillus pumilus and Staphylococcus hominis) were identified. A total of 25 bacterial isolates were phenotypically identified. All phenotypic identifications were confirmed by molecular analysis, except for S. hominis, which was molecularly identified as Exiguobacterium. Regarding water quality, all analyzed samples were positive for total and thermotolerant coliforms. The results obtained suggest that the Cavouco stream presents a potential risk for transmission of water-borne diseases, because of the presence of pathogenic bacteria. In addition, the current state of the stream also threatens the conservation of its native species.

Aquatic ecosystems have suffered significant changes due to multiple environmental effects, resulting from the release of large quantities of effluent without prior treatment (International Joint Commission, 2015; USGS, 2015). This discharge can cause physical,  chemical  and biological deterioration, and endangers both the resident aquatic organisms and public health. Scientific, technological and epidemiological advances have provided new tools for the assessment of water quality, both  for  human  consumption  and environmental purposes (Tanchou, 2014).
In 2015, the Centers for Disease Control and Prevention (CDC) reported that approximately 780 million people had no access to drinking water around the world. The consumption of contaminated water and lack of basic sanitation is estimated to cause 842,000 deaths per year worldwide, and 1,000 children under the age of five years die every day (WHO, 2014; WHO and UNICEF, 2015). Contaminated water carries pathogens that cause diarrhea, gastrointestinal disorders and systemic diseases, approximately 70% of diarrheal diseases could be avoided by improving basic sanitation (WHO, 2014). According to the Brazilian Ministry of Health, 6,715 deaths caused by diarrhea or gastroenteritis, presumably resulting from infection, were recorded between 2010 and 2015 (BRASIL, 2015).
Some studies have used traditional methods of selective isolation and cultivation to characterize the microbial communities of the affected environments (Skariyachan et al., 2013). However, taxonomic classification by these methods can be difficult because of variations in phenotypic characteristics (Woo et al., 2008). For this reason, molecular methods that allow fast and reliable confirmation of microbial identity have been developed (Ramírez-Castillo et al., 2015). Among these, methods using 16S rRNA gene sequencing are predominant. This gene is used as a phylogenetic marker because its sequences are highly conserved (Srinivasan et al., 2015).
The aim of the present study was to evaluate the water quality by the isolation and identification of representative bacterial species present in this environment, using biochemical and molecular methods.

Study area
The Cavouco stream, located at latitude 8°2'52.05"S and longitude 34°57'10.33" W, state of Pernambuco (UFPE), Brazil, is approximately 6 km long, and flows into the right margin of the Capibaribe River, one of the main rivers of state. Along its course, it receives pollutants from residential, laboratory and hospital waste, which reduces the water quality and threatens the aquatic life (Araujo and Oliveira, 2013; Freitas et al., 2016). Water samples (200 mL) were collected from five points (Figure 1) along the stream, according to the methods of Araújo and Oliveira (2013), and stored between 1 and 4°C until subsequent bacteriological analysis. 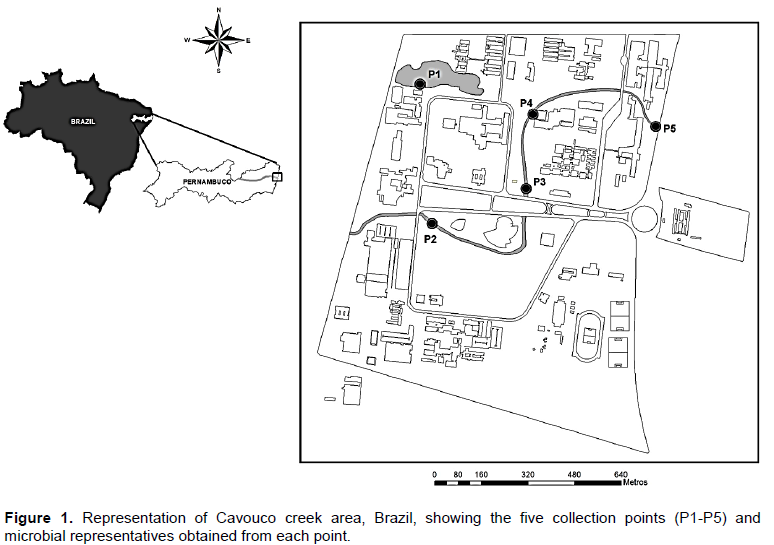 Isolation and phenotypic identification of bacterial isolates
For bacterial isolation, 50 µL  of  water  was  inoculated  onto  eosin  methylene blue (EMB) agar and 5% bovine blood agar (to count colony forming units), and incubated at 37°C for 24 to 48 h. Gram staining was then performed to make presumptive identifications of the bacteria found according to the technique described by Koneman and Winn (2006).
Gram-negative isolates were preliminarily identified using the following biochemical tests: glucose, lactose and sucrose fermentation, hydrogen sulfide production, motility, indole production and citrate, lysine and urea degradation. Species identification was confirmed using the Kit API 20E (Biomérieux), according to the manufacturer’s instructions.
Gram-positive isolates were preliminarily identified through colony morphology, hemolysis in blood agar, and presence/absence and position of spores, visualized through Gram staining. Species identification was confirmed using an automated system (BD Phoenix™ Automated Microbiology System).
Analysis of total and thermotolerant coliforms
For analysis of total and thermotolerant coliforms, water samples were collected from the water surface at a depth of 30 cm, from each of the five sampling points. The samples were stored between 1 and 4°C until analysis.
The presence and number of total and thermotolerant coliforms were determined using the multiple-tube fermentation method, and the results were expressed as most probable number (MPN) per 100 mL of sample, according to APHA (2015).
Molecular identification using 16S rRNA gene sequence analysis
The bacterial samples were inoculated into 5 mL brain heart infusion (BHI) broth for 24 h at 37°C for to DNA extraction. Chromosomal DNA was extracted using the phenol-chloroform method (Sambrook and Russell, 2001). DNA quality was evaluated by electrophoresis in a 0.8% agarose gel using 0.5× TBE buffer and run at 100 V for 1 h; gels were analyzed using a UV transilluminator and photographed. DNA concentration was quantified using a Nanodrop spectrophotometer (Thermo Scientific).
The 16S rRNA gene was amplified by polymerase chain reaction (PCR), using the primers fD1 (5´-AGAGTTTGATCCTGGCTCAG-3´) and rD1 (5´-AAGGAGGTGATCCAGCC-3´) (Weisburg et al., 1991). PCR was performed in a final volume of 25 μL, containing 1× buffer, 200 µM dNTPs, 1.5 mM MgCl2, Taq DNA-polymerase (1 U/µL; Invitrogen), 10 pmol of each primer, and 10 ng of DNA template. The PCR was performed using a thermocycler (C1000 Thermal Cycler – BioRad), and the PCR program consisted of 95°C for 5 min, 30 cycles at 95°C for 45 s, primer annealing at 54°C for 45 s, extension at 72°C for 2 min, and a final extension at 72°C for 5 min.
PCR products were purified using the Pure Link purification kit (Invitrogen) according to the manufacturer’s instructions, and sequenced using the Big Dye Kit (Applied Biosystems) on an automated DNA sequencer (ABI 3100). The 16S rRNA gene sequences obtained was compared with sequences deposited in the GenBank database (NCBI). The dendrogram was constructed using multiple sequence alignment, based on genetic distances, maximum parsimony, and maximum likelihood, using Molecular Evolutionary Genetic Analysis 5.2 software (MEGA5).
Bacterial library of Cavouco stream – UFPE
Identified bacteria were stored in 80% glycerol (150 µL of glycerol and 850 µL of bacterial culture) at -80°C, and under pure mineral oil (Isofar) at ambient temperature. The isolates were labeled according to: C (Cavouco), P (sampling point), the number of sampling points, and the number of isolations.

Microscopic and biochemical identification of bacterial colonies
Inoculated blood agar presented innumerable colony forming units (CFU), except for water samples collected at the stream source (Point 1), for which only a few colonies were observed. Due to EMB medium selectivity, these plates presented an average of 200 CFU, with a lower number of CFUs observed for Point 1, and higher number for point 5 EMB plates presented colonies with metallic green sheen, dark center, some with bright or pink edges, and mucoid appearance. In blood agar, some colonies were shiny or gray, with or without beta-hemolysis, and with irregular edges. Microscopic examination of Gram-stained colonies revealed  the  presence  of  Gram-negative and positive bacilli. Some Gram-positive bacilli were observed to be arranged in chains, filaments and spherical bodies. Approximately, 22 and 25 colonies were selected from the most frequent colonies present on EMB medium, and from blood agar, respectively.
A total of 25 isolates were identified phenotypically, belonging to seven genera (Bacillus, Enterobacter, Escherichia, Klebsiella, Proteus, Pseudomonas and Staphylococcus). Enterobacteria were present in all sampling points. Proteus mirabilis was highly prevalent among Gram-negative species (with eight isolates mostly from point 5), followed by Escherichia coli (six isolates), and Klebsiella pneumoniae (five isolates, from points 2, 3, and 4). Among the Gram-positive bacilli, the genus Bacillus was prevalent, with two species (Bacillus licheniformis and Bacillus pumilus) identified from point 4, and one (Bacillus cereus) from point 1. Another Gram-positive species, S. hominis, was identified from point 4 (Table 1). 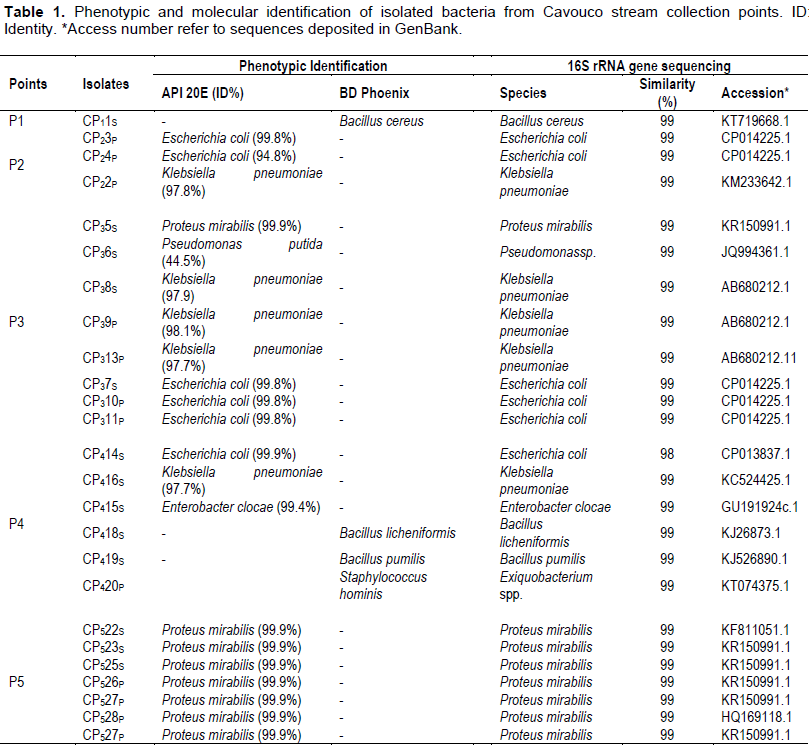 Presence of total and thermotolerant coliforms
All analyzed samples were positive to total and thermotolerant  coliforms,  presenting   an   MPN  >  1.4 ×  103/100 mL.
Molecular identification using 16S rRNA gene analysis
The 16S rRNA gene sequences (approximately 1.500 bp) for the 25 selected isolates were aligned, and compared with sequences deposited in the GenBank database. The obtained sequences were found to have a high degree of genetic similarity (98-99%) with deposited sequences for the same species, confirming their phenotypic identification. Of the 25 isolates, only S. hominis did not display concordance between the phenotypic and molecular identification. This isolate was identified phenotypically as belonging to the genus Staphylococcus, but through molecular analysis, it revealed 99% similarity with the genus Exiguobacterium (Table 1). The phylogenetic tree showed clustering of 16S rRNA gene sequences obtained from the studied isolates with those from GenBank, confirming molecular identification (Figure 2). 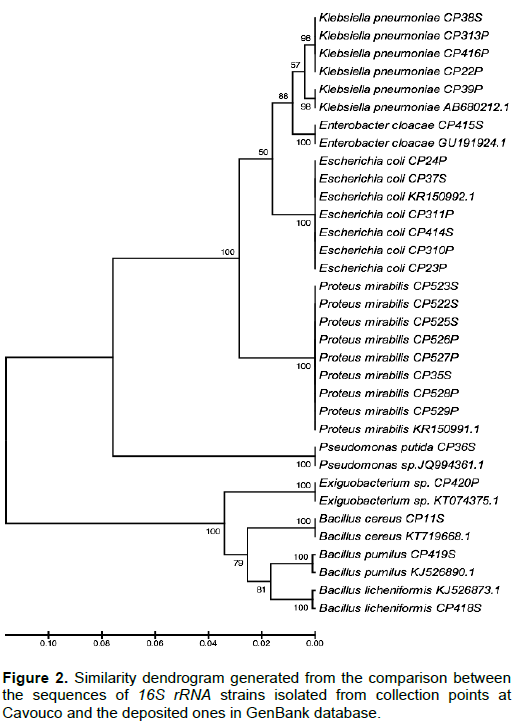