Resistance profile of Staphylococcus strains and detection of the Mec A, Van A and Van B genes in private hospitals in Benin

The present study aims to identify the emergence of Methicillin-resistant Staphylococcus aureus, S. aureus resistant to vancomycin and to investigate the presence of Mec A, Van A and Van B genes among Staphylococcus strains isolated from hospital environment. For each type of sample, surface of beds, recyclable material, boxes of rodar, floor and door slats, 53 samples were taken. So, a total of 265 samples were collected by swabbing (except boxes of rodar) in a private clinic in southern Benin. Bacteriological analysis was performed using the conventional method followed by DNA extraction with the Quiagen kit. The resistance genes Mec A, Van A and Van B were sought using specific primers. 215 samples were culture positive with 155 strains (62%) of coagulase negative (CNS) staphylococci and 95 strains (38%) of S. aureus. The majority of strains were resistant to gentamycin and clindamycin. These 155 strains were carried the Mec A gene and 10 strains carried the Van A and Van B gene. The study reveals the presence of resistant Staphylococci carrying the Mec A gene, which could be responsible for nosocomial infections in patients. Hygiene must be improved to limit the spread of these germs and protect patients.

S. aureus is a Gram-positive bacterium responsible for nosocomial and community infections in humans (Saeed et al., 2020). It is considered to be an opportunistic pathogen responsible for high morbidity and mortality (Angela et al., 2015). In healthcare settings, this pathogen can contaminate furniture, clothing, and equipment around colonized or infected patients, which function as sources or reservoirs (Angela et al., 2015). In this context, Murray et al. (1996) suggested that health workers use adequate hygiene techniques, aimed at preventing cross infection with S. aureus among equipment, professionals and patients (Murray et al., 1996). Siobhan and Lucy have stressed the urgent need to alert and inform health workers of the potential risk of hospital infection due mainly to the lack of hygiene and poor sterilization of s devices medical (Karsten et al., 2018). S. aureus has a diversity of resistance genes and is able to acquire resistance to most antibiotics, making S. aureus a "superbug ".

Vancomycin is the treatment of choice for MRSA infection. During s recent years S. aureus resistant to methicillin (MRSA) has emerged as a frequent cause of infections in hospitals around the world (Marchese et al., 2009). This increase in resistance strains is a public health problem, in particular in nosocomial infections (Zaki et al., 2019). The effect of plasmid resistance in Staphylococci is demonstrated for β-lactamase-mediated resistance to penicillin. Resistance rates are greater than 60% in human isolates of S. aureus from the general population and greater than 90% in hospital cases, regardless of clinical setting. The mechanism of resistance to vancomycin in S. aureus is still unknown. This may be due to genes combination of resistance that vancomycin with S. aureus. These genes are seven to (Van A, B, C, D, E, G and L) and are usually transferred by the transposon Tn1546 (Karsten et al., 2018). In Benin, there is little data on Staphylococcus spp presenting Mec-A and Van A and Van B genes. The identification of the emergence of these resistant strains is however fundamental for the monitoring of hygiene and the prevention of nosocomial infections. The present study aims to identify the emergence of Methicillin-resistant S. aureus, S. aureus resistant to vancomycin and to investigate the presence of Mec A, Van A and Van B genes among Staphylococcus strains isolated from hospital environment.

The study was carried out in a private clinic located in Southern Benin. The samples were taken by swabbing the hospital environment (bed surfaces, door latches, floor, recyclable material, rodar box) according to the methodology described by Dougnon et al. (2019). The samples taken were kept free and immediately taken to the laboratory for bacteriological analyzes. The collected swabs were placed in coolers with ice packs (4°C) before being transferred to Laboratory.

3 ml of Mueller Hunton broth was added to each swab and incubated at 37°C (Dougnon et al., 2016). After 16 h of incubation, the broth was inoculated on Chapman Agar medium for 18 h for bacteriological analysis. After incubation, each type of colony was re-seeded to obtain a pure colony, followed by microscopic examination (fresh state and Gram stain). Biochemical tests were carried out in accordance with the results obtained with Gram stain. The search for catalase, free staphylocoagulase and DNase were performed (Dougnon et al., 2016).

The resistance profile of each bacterial strain was established by performing antibiogram. Kirby Bauer Disc diffusion method was used. The interpretation of the diameter inhibition zone was made according to the recommendations of the antibiogram committee of the French society of microbiology (CA-SFM/EUCAST, 2018). The choice of anti-antibiotic discs was inspired by the recommendations of the French Society of Microbiology. The antibiotics used for the sensitivity tests of cocci strains are: Oxacilline (OXA; 1 µg), Fosfomycin (FO; 50 µg), Gentamycin (GEN; 10 µg), Vancomycin (VAN; 30 µg), Chloramphenycol (C; 25 µg), Clindamycin (CD; 10 µg), Pristinomycin (RP; 15 µg), Erythromycin (E; 15 µg) and Ampicillin (AMP; 2 µg).

Extraction and purification of genomic DNA was performed from 500 µl aliquots of each, which were transferred to Eppendorf tubes and centrifuged for 10 min. The sediment was used for genomic DNA extraction with the DNeasy Blood and at 5,000 xg Tissue kit (Qiagen, Germany), according to the manufacturer's instructions. Purified DNA samples were then stored at 20°C for testing for resistance genes.

Detection of Mec A, Van A and Van B genes

The polymerase chain reaction (PCR) mixture had a final volume of 25 kit DNA Taq Polymerase with Standard Taq Buffer added with 0.5 µl of each oligonucleotide, following the manufacturer's instructions. The primers (Table 1) used were synthesized by Inquaba biotec; amplifications were performed in PTC-200 Peltier Thermal Cycler (MJ Research). To do this, an initial denaturation was carried out at 94°C for 4 min followed by thirty cycles of denaturation at 94°C for 1 min, hybridization at 50°C for 1 min and elongation at 72°C for 1 min. Finally, a final extension was carried out at 72°C for 5 min (Ramya et al., 2016). The multiplex PCR was carried out according to the method of Perez-Roth et al. (2002) using the Qiagen Amplification Kit. Following amplification, 10 µl of the reaction mixture was loaded onto an agarose gel at 1.5 % stained with 6 µl of ethidium bromide and electrophoresis to estimate the sizes of the amplification products with a molecular size standard scale of 100 bp (Velasco et al., 2005).

Data were inserted in Microsoft Excel 2013. The graphs obtained were obtained thanks to the analysis software GraphPad Prism 7.

Molecular detection of Mec A and Van A Van B genes 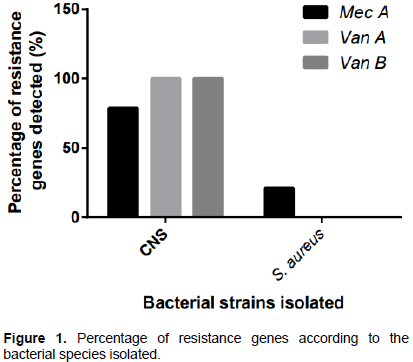 The resurgence of multidrug-resistant bacteria in hospitals is a worldwide phenomenon using all bacterial species, but to varying degrees depending on the country and the department, depending on prescribing habits and hygiene practices. The frequency of nosocomial infections in developing countries remains high. The general objective of this study was to identify emerging strains of staphylococcus resistant to Vancomycin.

This study was carried out on a total of 53 biological samples from the hospital environment and some equipment used in patient care. These samples were collected in the inpatient department. Of the 53 biological samples analyzed, 43 samples presented at least one microorganism. An overall prevalence of 81.13% was obtained in this study. This prevalence obtained is extended to that obtained in France and the United States, which were 40 and 30% respectively (Ito et al., 2012). The latter worked on the multidrug-resistant bacteria responsible for infections associated with hospital care.

The difference in the prevalence data obtained could be justified in part by the fact that their study was carried out on all multidrug-resistant bacteria in a hospital environment. Secondly, this result could also be justified by the level of hygiene in the two study areas. In fact, caregivers, patients and nurses respect hygiene measures more. 80% of the strains of Staphylococcus were resistant to clindamycin and resistant to gentamycin. Among the antibiotics used, vancomycin and oxacillin were the most active molecules. As a result, these antibiotics are the molecules of choice in the treatment of infections caused by these bacteria. This hitherto reassuring situation encourages continuous monitoring of the sensitivity of Staphylococci to glycopeptides.

31 strains out of the 50 bacteria isolated carried the Mec A gene and 2 strains carried the Van A and Van B gene. Presence of Mec A gene indicate the strains should be methicillin-resistant S. aureus (MRSA) (Bamigboye et al., 2018). Presence of Van A and Van B genes could explain resistance of Staphylococcin to Vancomycin (Karsten et al., 2018). Relatively different results have been obtained in similar works. Bamigboye et al. also investigated resistance genes in S. aureus isolated from 73 consecutive patients with infective conditions at Ladoke Akintola University of Technology Teaching Hospital (Nigeria) (Bamigboye et al., 2018). Mec A gene was detected in 5 (6.8%) isolates but Van A or Van B genes were absent. Aubaid et al. (2020) found that 72/ 250 of S. aureus isolates from patients with different clinical cases whom admitted to Hospitals in Al Muthanna (Iraq), contained Mec A gene and five isolates contained Van A gene and only nine isolates contained Van B gene. The difference in the origin of the strains can explain the different results. Hygiene need to be improved to prevent nosocomial infections.

The problems caused by nosocomial infections are currently not sparing any country, but the daily struggle to maintain a requirement of cleanliness no longer simply depends on the means committed. Nosocomial infections are a real public health problem. The study carried out in a private hospital in southern Benin shows the prevalence of resistance genes in staphylococci. The most isolated strains were coagulase negative staphylococcus followed by S. aureus, most of which were all multidrug-resistant. It is important to promote good hygiene practices in order to reduce nosocomial infections in hospitals.

The authors appreciate the staff of the hospitals involved in the study. The authors also thank Dr Esther DEGUENON for their technical support. They are grateful to the whole staff from the Research unit in Applied Microbiology and Pharmacology of natural substances (University of Abomey-Calavi, Benin).