Maize or corn (Zea mays), is the most important cereal crop in sub-Saharan Africa and, with rice and wheat, it is one of the three most important cereal crops in the world. Maize is high yielding, easy to process,  readily  digested, and cheaper than other cereals. It is also a versatile crop; growing across a range of agro ecological zones. Every part of the maize plant has economic value: the grain, leaves,  stalk,  tassel, and cob can all be used to produce a large variety of food and non-food products (Purseglove, 1992; Osagie and Eka, 1998). One of such food prepared from maize is “ogi”, fermented cereal porridge made from maize and produced using simple processing methods. The “ogi” porridge is very smooth in texture and has a sour taste reminiscent of that of yoghurt (Banigo and Muller, 1972). The traditional preparation of “ogi” include soaking of corn kernels (maize grains) in cold water for 2 to 3 days, washing several times with clean water, wet milling to paste and sieving to remove bran, hulls and germ (Akinrele, 1970; Odunfa, 1985). The pomace retained on the sieve is discarded and used as animal feed, while the filtrate is fermented for 2 to 3 days to yield “ogi”, which is a sour, starchy sediment with water on top. The top water is called “omi-eko” or “omikan” or omidun. Ogi colour depends on the colour of the maize grain used, yellow or milk white maize grain (Onyekwere et al., 1989).  “Ogi” an acid fermented cereal mash made from maize or corn is traditionally produced by soaking the maize/corn grains in cold or warm water for 24 to 72 h to allow for fermentation before it is wet milled, sieved and soured. Sedimentation of the soured “ogi” for 48 to 72 h gives rise to omidun (Dada and Muller, 1983; Odunfa and Adeleye, 1985; Onyekwere et al., 1989; Teniola and Odunfa, 2001). Omidun has been traditionally found to be of medicinal importance in the South-Western part of Nigeria. It is used to soak bark of the root of some plants to treat not only fever and malaria, but is popularly used as solvent for herbal extraction, dish stain removal and as insect killers. Omidun has been used in the extraction of antimicrobial agents from some leaves such as Bryophyllum pinnatum and Kalanchoe crenata. The extracts were found inhibitory against some Gram-negative organisms (Aibinu et al., 2007). Information from indigenes also claims that omidun is popularly used in the control of diarrhoea.  Series of work has been done on the microbial and therapeutic values of omidun. Omidun has been reported by Falana et al. (2011) to contain some microorganisms including L. plantarum. They also reported that these microorganisms have antimicrobial efficacy against some pathogenic microorganisms including Escherichia coli (Falana et al., 2012). However, information on comparative effects of omidun from white and yellow maize varieties is also essential. Hence, this research focused on comparative effects of omidun from yellow and white maize varieties on two tested pathogenic microorganisms. 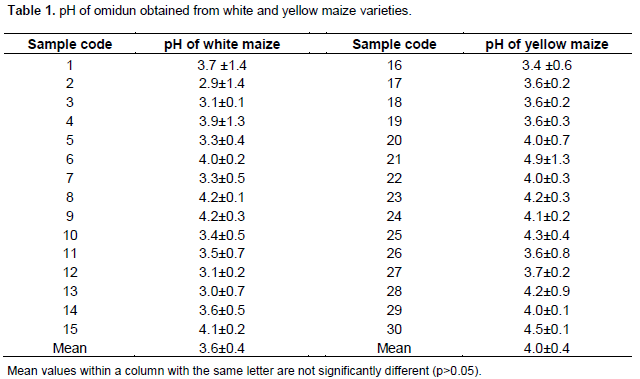 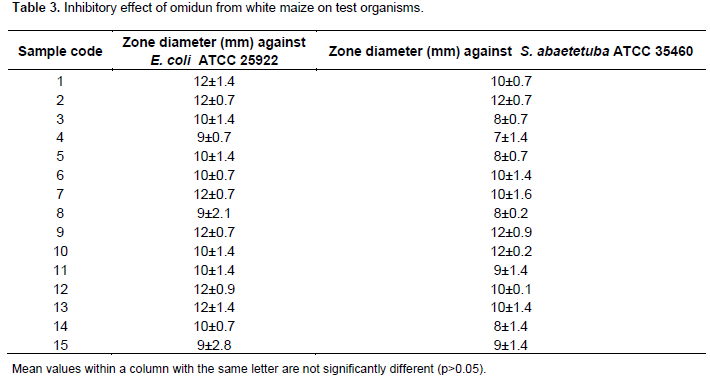 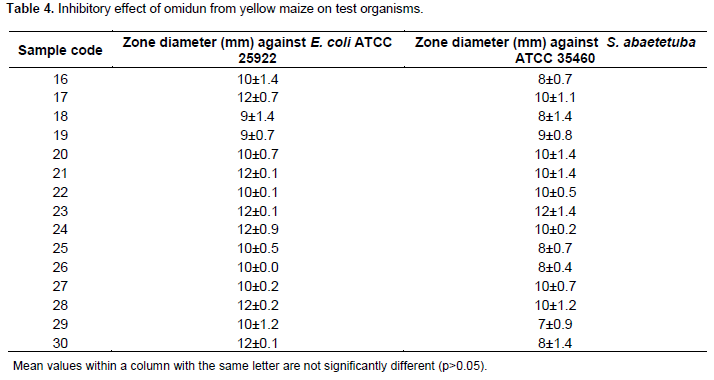 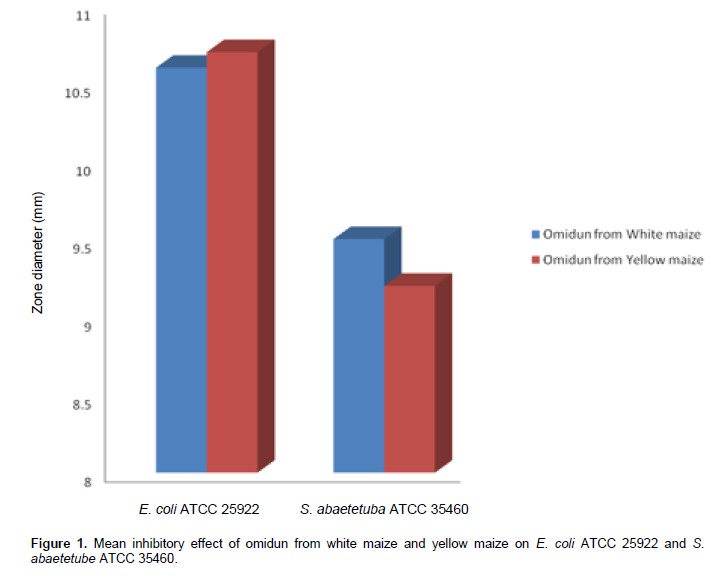 This study has revealed that omidun samples obtained from white maize and yellow maize varieties showed varying pH (Table 1). The mean pH obtained for omidun from yellow maize varieties (4.0) was significantly higher than that of omidun obtained from white maize (3.6) varieties. This is similar to what was obtained by Omemu et al. (2007) during the souring period of “ogi”. Therefore, the acidic pH of omidun samples from the two maize varieties could be partly responsible for the zones of inhibition obtained in this study, this is because most bacteria are acid intolerant (Steinkraus, 1997) and cannot grow at low pH except a few such as the lactic acid bacteria (LAB) (Savadogo et al., 2006). LAB has also been reported as predominant in fermented cereal products by many authors (Omemu, 2011; Opere et al., 2012).
The issue of antimicrobial resistance of pathogens to antibiotics have necessitated the development of antimicrobial  agents  from other sources (Williams, 2000) and that is one of the reasons for this research work. In the present study, similar zones of inhibitions (9 to 12 mm against E. coli ATCC 25922 and 7 to 12 mm against S. abaetetuba ATCC 35460, respectively) were obtained for the studied omidun samples from the two maize varieties  (Tables 3 and 4). Hence, the type of maize from which omidun was prepared did not significantly (p>0.05) affect the antimicrobial activity exhibited on the tested gastro enteric bacteria.
The observed zones of inhibition may be due to LAB in ‘ogi’, which cannot be ruled in omidun. LAB had been known to produce antimicrobial substances such as organic acids, diacetyl, hydrogen peroxide and bacteriocin (Mathieu et al., 1993; Bonade et al., 2001) and has been reported to be a potential host for the production of therapeutic recombinant protein.
Although, omidun from white maize varieties showed slightly higher zones of inhibition (10.6 mm against E. coli ATCC 25922 and 10.7 mm against S. abaetetuba ATCC 35460), than omidun from yellow maize varieties (9.5 mm against E. coli ATCC 25922 and 9.2 mm against S. abaetetuba ATCC 35460). However, the varying zones of inhibition were not significant (p>0.05) and may be attributed to their varying TTA as obtained by Omemu et al. (2007) during the souring process of "ogi". It might also be attributed to the varying microbial composition of the omidun samples (Odunfa and Adeleye, 1985).
Generally, the high antimicrobial activity of omidun from white maize (Figure 1) was not as high as what was observed in most of the commercially produced  antibiotics, an indication that commercial antibiotic (orthodox  medicine)  was   more   effective  against  the tested microorganisms than omidun samples. Antimicrobial activities of omidun samples may not be due to the action of a single active compound found in them and some of which might have been detoxified by the tested microorganisms. Moreso, disparity between activities of the two varieties of omidun and standard antimicrobial drug may be due to the mixture of bioactive compounds present in omidun samples compared to the pure compound contained in the standard antibiotics (Gatsing et al., 2010). However, many consumers may still prefer the use of LAB or their antibacterial compounds (such as omidun) to control food-borne pathogens and spoilage organisms. Many researchers such as Ogunbanwo et al. (2004) reported that, unlike synthetic chemicals, cells of LAB which might be present in omidun samples have no known adverse effects.
This work shows that both omidun obtained from white and yellow maize varieties have potential therapeutic properties, but this property was slightly higher in omidun from white maize varieties than in omidun from yellow maize varieties, although with no significant difference (p>0.05) and this might mean that omidun from white maize varieties possess slightly higher antimicrobial components more than omidun obtained from yellow maize variety.

The findings in this research work suggest the use of omidun, preferably the one obtained from white maize variety in the control of conditions caused by the tested microorganisms. However, further work is highly recommended in order to isolate, identify and quantify the active metabolite present in omidun samples from the two maize varieties (white and yellow).