Effect of using treated wastewater on the bacteriological quality of raw cow's milk: A case of a farm in Northeastern Algeria

This study aims to assess the impact of the use of treated wastewater (without chlorination) in farming and dairy cattle breeding. Milk samples were collected from a farm in northeastern Algeria. The treated wastewater from the treatment plant is used on this farm for different activities. The results obtained show that the average contamination of milks with total flora is 3.7.105 CFU /ml. Fecal coliforms are present at an average value of 1.5.103 CFU/ml. All of the samples (100%)  were positive for the count of fecal enterococci with an average value of 2.5.10 CFU/ml. Fungal flora was present with an average value of 1.36,103 CFU/ml. Escherichia coli was isolated in 100% of the samples with high resistance rates for beta-lactam antibiotics. The results obtained for the search for pathogens belonging to the genus Staphylococcus show that 64% of the isolates were coagulase-negative Staphylococcus and 36% of the isolates were coagulase-positive. The study of Staphylococcus susceptibility/resistance to antibiotics revealed high frequencies of resistance, especially to beta-lactam antibiotics and macrolides. The bacteria tested show a majority resistance for Penicillin and Oxacillin (100%). These results reflect the microbiological risk that the consumption and marketing of this milk represents for the health of consumers and the need to implement preventive measures.

The emergence and spread of antibiotic resistance genes among   pathogenic   and   non-pathogenic  bacteria  has  been a growing threat in recent decades and there is a rapid  lack  of  therapeutic options (Li and Webster, 2018;
Barancheshme and Munir, 2018). The emergence of this resistance in bacteria in animals and their products has attracted considerable interest due to the potential of transferring this resistance to the human population (Vásquez et al., 2017; McDermott et al., 2018). Suspected sites of resistance transmission include wastewater treatment plants where wastewater from various sources, including municipalities, sanitary wastewater, hospital effluents, storm water runoff and industries, is mixed and treated using a multi-stage purification process (Mohammadali and Davies, 2017; Hultman et al., 2018).
The use of wastewater for irrigation is observed as a way to address the imbalance between demand and supply of water. However, the literature shows that irrigation with treated wastewater is not without implications, some of which are negative (Gatto D'Andrea et al., 2015; Becerra-Castro et al., 2015).
Inadequately treated water from sewage systems represents both a risk to human and animal health if it is used to pasture or fodder crops grazed by livestock or otherwise consumed (Cass and Lowe, 2014). As a result, the water may contain bacteria, viruses, protozoa and helminth eggs that would be a risk to the livestock, or to humans who have contact with or consume livestock products (meat, milk, eggs, etc.) (Drechsel et al., 2010). The wastewater treatment plant on the wilaya of Khenchela (Northeastern Algeria) is a low load activated sludge   with  a  capacity  of  23,000  m3/day  for  192,000 equivalent/inhabitant. A mixture of urban, industrial, agricultural, storm water runoff and hospital wastewater from the city of Khenchela is discharged to this treatment plant, only to be finally discharged without tertiary treatment and disinfection into Baghai wadi.
The owner of traditional farm uses treated water at the outlet of a wastewater treatment plant to irrigate his pasture field and breed his cows (Figure 1). On the farm, this water is used for three main activities: pasture cultivation, dairy barn farming and cleaning, and for dairy cow consumption. 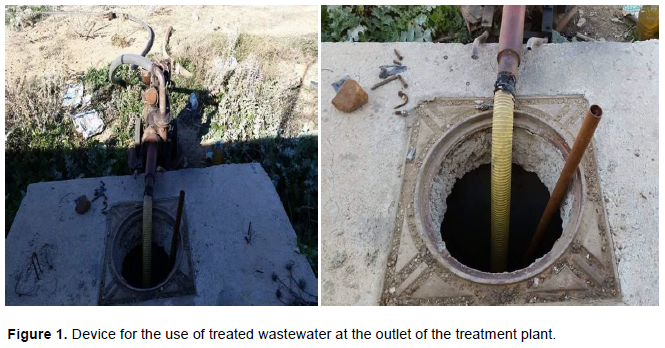 The main objective of this study is to assess the risks associated with the reuse of treated wastewater in agriculture. The dairy industry is particularly concerned about the potential effect on dairy cattle and milk quality following pasture irrigation with waste water. Therefore, monitoring bacterial pathogens, their survival and transfer is of the utmost importance to ensure that milk quality is not compromised.

Fourier transforms infrared (FTIR) spectroscopy
Figure 2a and b. show the Fourier transform infrared absorption spectra of  raw  milk  samples  in  the  spectral range of 400 - 4 000 cm-1. There are numerous peaks that correspond to the different molecular bonds of milk components interacting with infrared radiation. Three main components, fat, protein and lactose, all have strong and characteristic peaks.
Determination of the fat content of milk samples from Fourier Transform Infrared (FTIR) spectra is mainly based on 2 specific regions. The spectral region between 1 725 and 1 850 cm-1 showed bands of low absorption due to the carbonyl group (C=O) of milk lipids (commonly called fat A). Another spectral region of medium intensity between 2 800 and 2 924 cm-1 absorbed infrared light due to the alkyl chain of fatty acids (commonly called fat B)   (Lefier   et   al.,  1996;  Eskildsen  et  al.,  2016).  The infrared peaks at 2 854 and 1 744 cm-1 observed in Fig. 2.a. could be related to the milk fat contents B and A respectively.
Milk protein is expected to have absorption bands around 1 650, 1 550 and 1 250 cm-1 due to amide I, amide II and amide III groups, respectively (Dagnachew et al., 2013). It also has an absorbance peak in the region between 1 060 and 1 100 cm-1, associated with a phosphate group bound to casein protein (Etzion et al., 2004). Figure 2b shows two spectral bands of medium intensity, the peak of 1 242 cm-1 in the wavelength range of 1 225-1 280 cm-1 corresponds to the N-H bending and C-N stretching vibrations of amide III (Lei et al., 2010). The other peak of 1 546 cm-1 in the spectral range of 1 525-1 580 cm-1 was obtained by bending the n-plane N-H with the C-N stretching vibrations of amide II (Moros et al., 2006).
Lactose is expected to have an absorption peak in the infrared region between 1 030 and 1 150 cm-1 due to the presence of various C-O stretching vibrations in carbohydrates (Grappin et al., 2006; Zhou et al., 2006). Figure 2a shows a high intensity peak of 1 076 cm-1 in the spectral range between 1 000 and 1 150 cm-1 and this peak could be related to the lactose content of the milk. A typical water transmittance spectrum between 3 650 and 3 000 cm-1 was represented in the hydroxyl group (O-H) (Coitinho et al., 2017) (Figure 2a).
Microbiological analyses
The average contamination of milk samples with total flora is 3.7.105 CFU/ml. fecal coliforms were present at an average value of 1.5,103 CFU/ml.  All of the samples (100%) were positive for the count of fecal enterococci with an average value of 2.5.10 CFU / ml. For fungal flora, it was present with an average value of 1.36,103 CFU/ml.
According to the microbiological criteria of the inter-ministerial decree of 04-10-2016 of the OJ No.: 39/17 of the Algerian Republic (Table 1) (JORA, 2017), the overall quality of the study sample is compromised. Fecal enterococci were the first causes of non-compliance: A hundred percent of the samples was unsatisfactory, the total aerobic mesophilic flora and fecal coliforms do not exceed the acceptability limit according to the Algerian standard.
E. coli isolation and identification
For E. coli testing, 25 isolates were isolated, purified and identified. Antibiotic resistance was tested for each of the bacteria identified against 10 different antibiotics. The values of inhibition diameters were compared with the values in the reading table (MHPHR, 2014). Resistance rates for each antibiotic were calculated; the results obtained are grouped in Table 2.
Seventy two percent of E. coli isolates were resistant to Ampicillin (AMP). Forty per cent (40%) of isolates were to Amoxicillin/Clavulanic acid (AMC). The resistance frequencies for Ceftazidime (CAZ) (third generation cephalosporin) and Imipenem (IMP) were 28 and 00% respectively. The resistance rate obtained for antibiotics belonging to the aminoglycosides class is variable, with a resistance rate of 08% for Gentamicin and 32% for Amikacin. This variability would be due to the low consumption of Gentamicin giving the existence of less toxic and more effective molecules. Eight percent of E. coli isolates was resistant to Colistin, 12% to fosfomycin, ofloxacin and Nitrofurantoin.
Staphylococcus isolation and identification
The second cause of non-compliance of the milk sample is the presence of Staphylococcus. All samples were positive for Staphylococcus; colonies that developed on Baird Parker agar after incubation were stained with Gram stain and staphylocoagulase tested to distinguish strains with pathogenic potential (S. aureus) from non-pathogenic  strains. Twenty five strains were isolated and purified; their identification by the API 20 Staph system revealed the predominance of coagulase-negative Staphylococcus (64%) compared to the coagulase-positive S. aureus species (36%). The main species of coagulase negative Staphylococcus isolated and their respective frequencies were: S. hominis (36%), S. xylosus (08%), S. warneri (08%), S. epidermidis (04%), S. chromogenes (04%) and S. lugdunensis (04%).
Antibiotic resistance was tested for each of the bacteria identified against 13 antibiotics. Resistance rates for each antibiotic were calculated and the results obtained are presented in Table 3. It can be observed that resistance rates vary significantly from one antibiotic to another. The Staphylococcus species studied showed a 100% resistance rate to Penicillin, and Oxacillin.  The resistance rate obtained for antibiotics belonging to the aminoglycosides class varies, a zero resistance rate for Gentamicin, 04% for Amikacin and 08% for Kanamycin. For macrolides; the Staphylococcus species studied showed 100% resistance to Erytromycin, 48% to Clindamycin and 64% to Pristinamycin. Eighty per cent (80%) of the isolates were resistant to Rifampicin and 12% to Cotrimoxazole. A resistance rate of 2% for Ofloxacin and a zero resistance rate for Levofloxacin and vancomycin. Multiple antibiotic resistance phenotypes were generated from 25 S. aureus isolates showing resistance to three or more antibiotics. Data indicating the predominant multiple antibiotic resistance phenotypes are shown in Table 4. 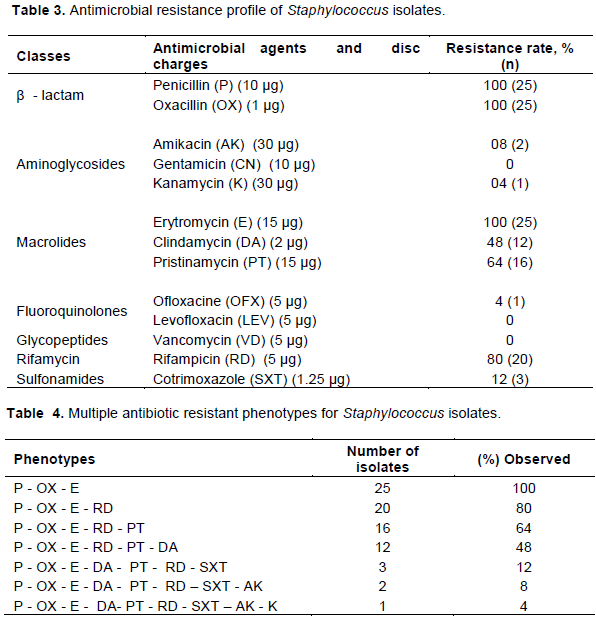 This study aims to assess the impact of the use of chlorine-free treated wastewater in farming and dairy cattle breeding.  Milk samples were collected from a farm in Northeastern Algeria. The treated wastewater from the treatment plant is used on this farm for different activities. The results of this study indicate that the overall microbiological quality of milk samples is well below current Algerian standards; they are heavily contaminated with fecal contamination germs and pathogenic bacteria with worrying antibiotic multi-resistance profiles. The source of contamination in milk samples can be water used for three main activities: pasture farming, dairy barn operations and cleaning, and for    consumption   by   dairy   cows.   The   presence   of multidrug-resistant bacteria in milk can pose a serious threat to public health and has a negative effect on the treatment of infections in humans. Newborns and children appear to be more exposed to milk contaminants than adults because they consume larger amounts of milk and are more sensitive. Urgent and effective measures must be taken to ensure proper wastewater management by the services concerned and farmers. Therefore, it is recommended that training and advice be given to farm owners and workers responsible for milking, emphasizing the need for hygiene practices on farms.

The authors thank Professor Boumaza A. Charif of the Department of Mechanics, Khenchela University, Algeria, for his valuable assistance in conducting biochemical analysis of samples using the Fourier Transform Infrared Spectroscopy (FTIR) technique at the Laboratory of Structures, Properties and Interatomic Interactions (LASPI2A), University of Khenchela, Algeria.